Back in October I was missing the mountains and looking for a way we could find some altitude. Without the freedom of the last two years we’re constrained by work, so we took advantage of Paul’s enforced winter holiday. He has to take two weeks off over the Christmas period which was a good reason to plan a trip away in Bertie. 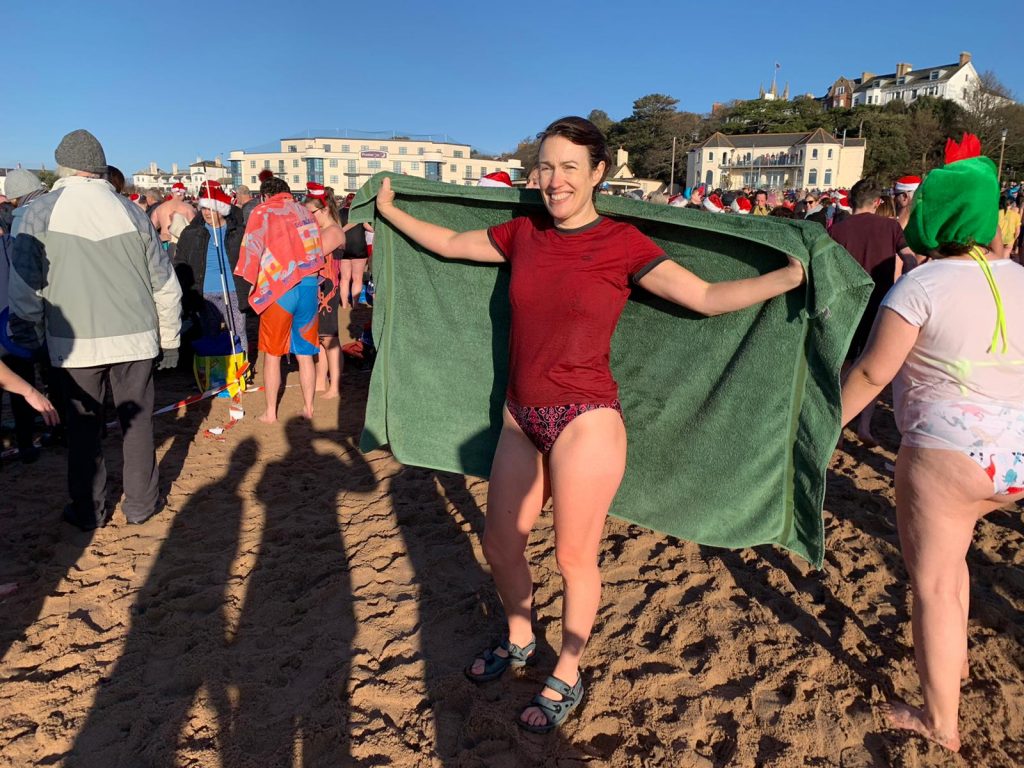 After my Christmas Day dip

With social commitments, including the Exmouth Christmas Swim, we would have a week for a trip somewhere, and this time it would be the Lake District. It’s somewhere we have avoided in the last ten years as it is just so busy, a little unfair maybe, but when given a choice we always plumped for the elbow room of Scotland or the slightly less popular mountains of north Wales. It was time to put that right and head back to the fells.

I wanted to stay at Sykeside campsite in Patterdale; nestled between Fairfield and High Street with Helvellyn in easy reach, it seemed like the ideal destination for a week of walking. But the lakes are still popular even (or maybe especially) in the Christmas and New Year period, so a whole week was off the cards, I only managed to get three nights booked in.

In retrospect three nights may have been enough. I definitely want to go back but I think we might have endured our maximum amount of time without access to the internet. Even the radio was mostly silent although sometimes we managed to pick up Manx Radio, which triggered recollections of several stints working on the Isle of Man. We had been warned, so had downloaded maps, books and tv programmes to keep us going. Next time we’ll make sure we have some playlists downloaded too.

We gave ourselves seven hours to get to our destination before darkness fell. It’s a long trip from Exmouth with plenty of opportunity for delays. In the end it took us nearly nine hours including half an hour at a snails pace in the darkness and fog of the Kirkstone pass (it only took 6 hours to get back!). It’s not a bad drive, a little narrow in places but mostly two lanes, however when you cant see where you’re going it’s a bit more interesting.

Sykeside was a fantastic spot on the flat valley floor with good hardstanding pitches for motorhomes and caravans and amazing views in all directions. The weather was blowy and gloomy at times but it rarely rained and the low cloud zooming in over the mountains was incredibly atmospheric. The local pub was cosy, serving good beer and providing slow wifi for those of us desperate to know what was happening in the outside world. It was a welcome respite for the hardy souls who were under canvas. 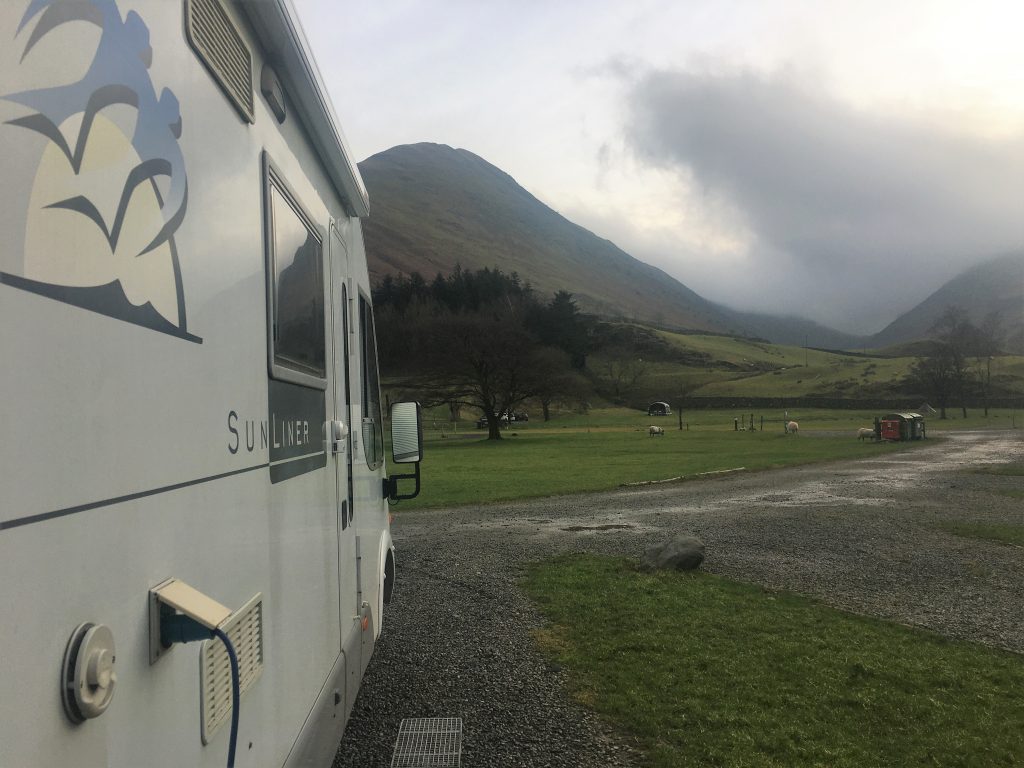 Parked up at Sykeside watching the cloud over the mountains

From here you could chose to walk the Fairfield peaks or the High Street side of the valley without having to move your vehicle. Helvellyn is a longer trek; outside of the winter season there is a bus that will take you up the valley but it wasn’t running while we were there.

With our two full days we decided on a walk up Fairfield first of all. With the cloudy weather we wanted a walk that would be easy to navigate so walking up Dovedale and back down Caiston Glen, with a quick diversion to the top of the mountain, was ideal. The route follows streams, becks, fences and walls for most of the way, handy handrails when the fog was around us. 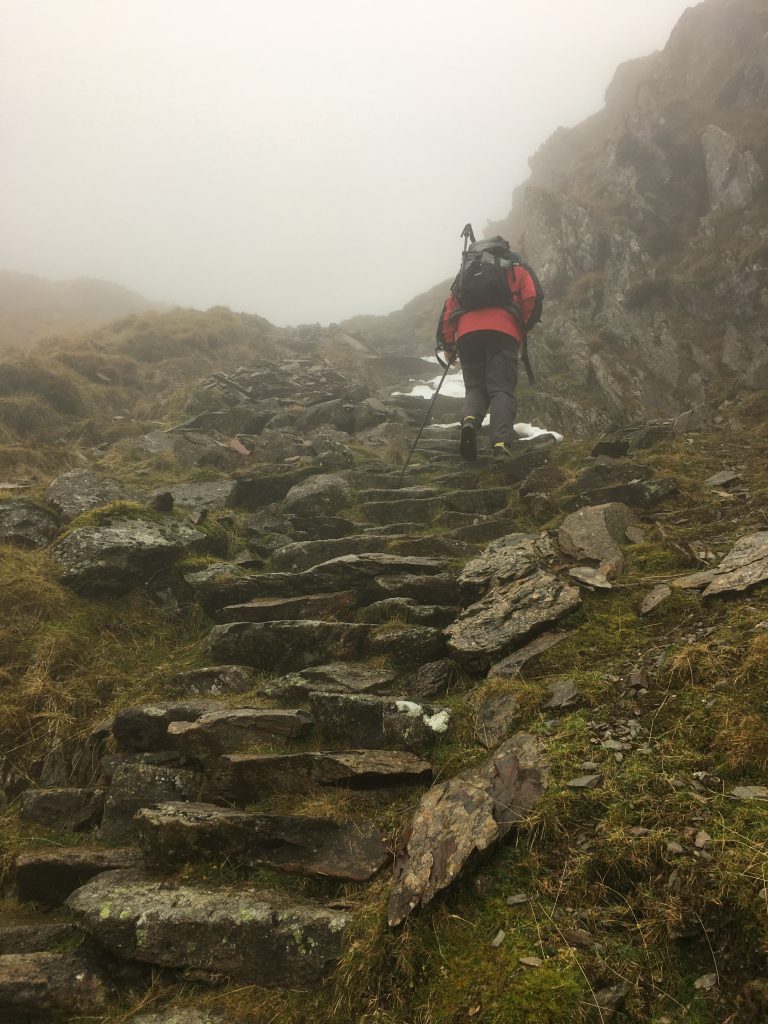 For the second day, as the winds strengthened about us and put paid to any thoughts of Striding Edge, we decided on a valley walk. Down to the end of Ullswater and back again the valley paths allowed us to enjoy the occasional sunshine while remaining sheltered from the blustery winds. 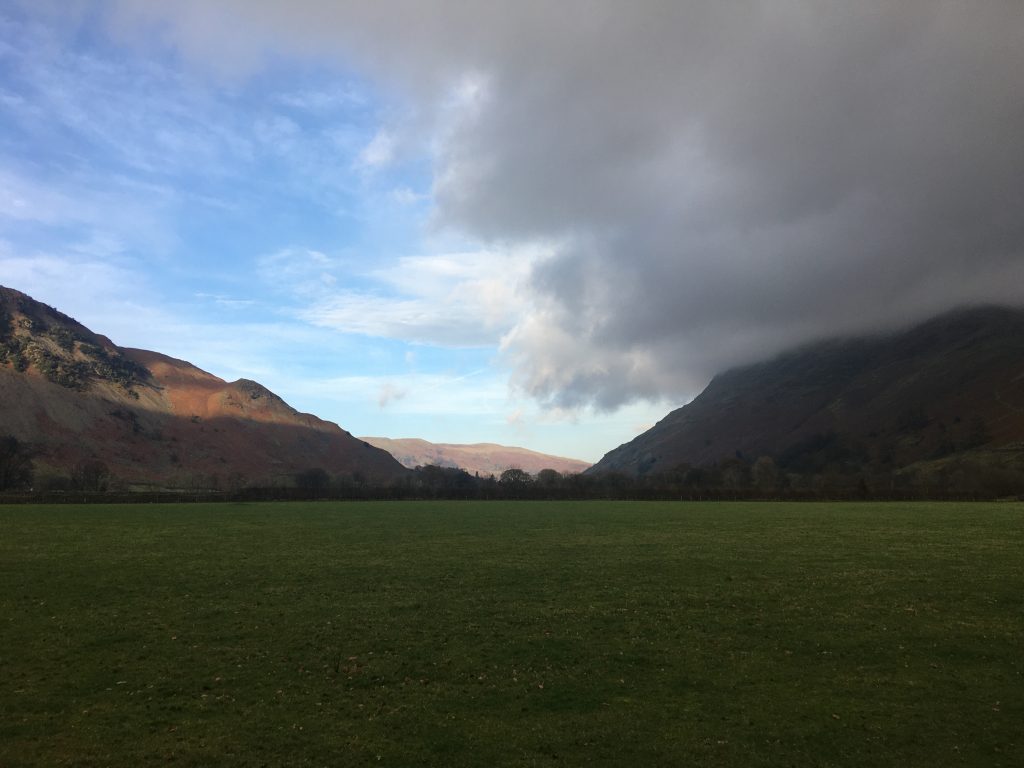 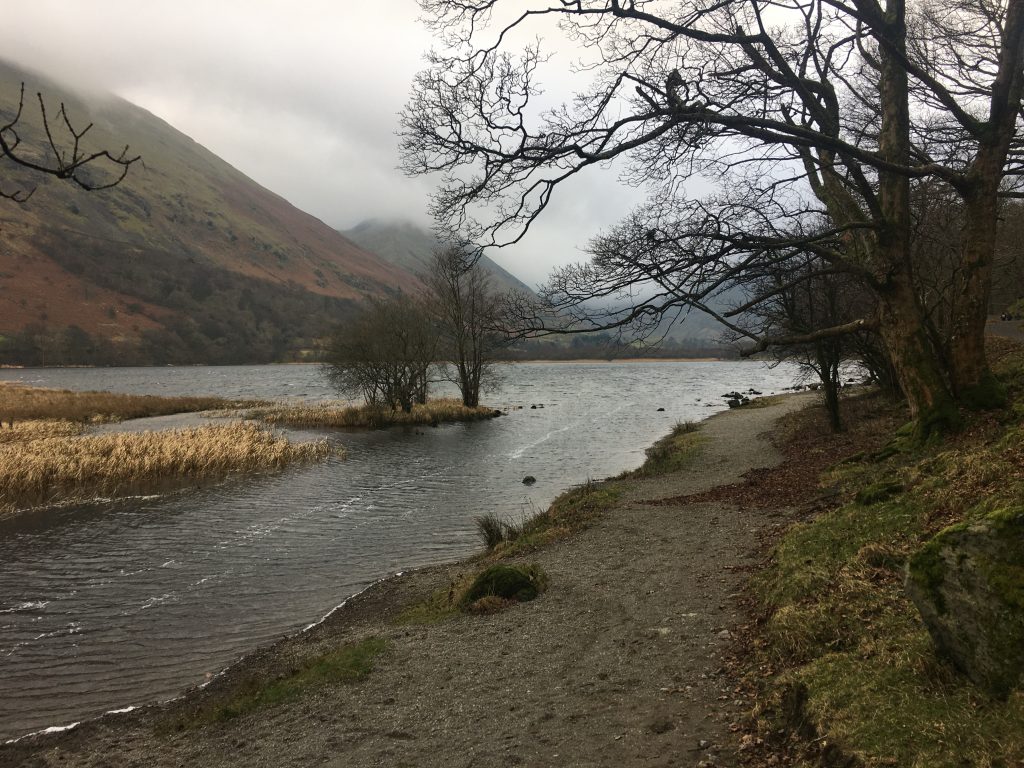 It was a shame to have to move on, but the site was fully booked for new year so we took the route back over the Kirkstone Pass (in daylight this time, although the fog was still lingering). This time we were heading to the Camping and Caravanning Club Windemere site.

For hikers this site doesn’t have an awful lot to recommend it, it’s a few miles to Windemere and lacks the dramatic views of Sykeside. The walking direct from the site is a little tame; farm lands and low moors rather than the high fells. It’s not that they aren’t enjoyable walks, just slightly disappointing when you can see the heights in the distance.

But even if it doesn’t provide a mountainous Lake District experience there is enough to recommend it for a few days. A bus (you take your life in your hands crossing the A591) will take you towards Windemere and Ambleside in one direction, and Kendal in the other. Plus the village of Staveley has a great bike shop and the Hawkshead brewery provides a fantastic venue for beer tasting. Best of all (ok, maybe the beer is the best thing) there is some fantastic mountain biking in the area to the north of Staveley and it was this that made the site worth visiting for us.

Our New Years Eve mountain biking route up Longsleddale, over the top at Sadgill and back via Kentmere gave us plenty of opportunity to get off of the roads and onto bridleways. It was challenging enough for us without taking us ridiculously high into the mountains. Yes, there was a bit of pushing and carrying involved (cycling uphill on cobbles is pretty tricky) and Paul managed to bend his back wheel so that we had a constant thrumming accompanying us, but it didn’t detract from a great day out. 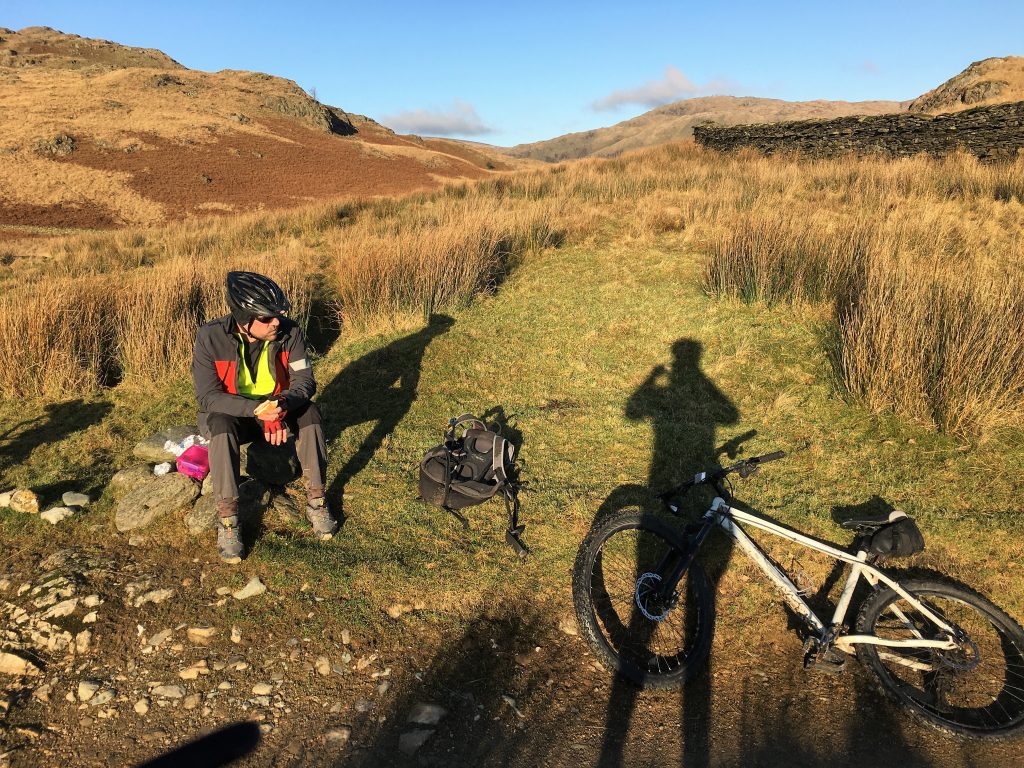 We were so bushed from cycling that we didn’t manage to stay up to see the new year in. We woke up briefly to the sound of other people celebrating on the campsite before falling straight back to sleep again. Missing a specific minute didn’t bother us though, just getting away for a trip to the mountains in Bertie had been celebration enough.