One of the things I’ve missed most while travelling in our motorhome is a long hot bath. I usually prefer a shower, but whenever I’ve been stressed, anxious or just plain tired I have relished a hot bath, a cup of tea and a good book (I find my kindle copes better with the steam and doesn’t go crinkly at the edges –  so long as I don’t drop it in the water).

We’d looked at the baths at Bagno Vignoni but they were too cool for bathing. So, after a few active days and a few sleepless nights (due to it being ‘that time of the month’) I thought it was worth looking for something a bit warmer.

The closest hot springs were at Saturnia, another Tuscan hill town with a spa, but also free public bathing in the warm waters. I’d done a bit more research this time and knew that we would get water at about 38.5 degress, which is pleasantly warm, and that the baths are used year round.

As we drove towards the area we got a view of the pools from a distance, the cascade of pools and milky blue/green water looked almost man made and there were people bathing, so it must be warm. The anticipation of a long soak put me in a good mood, in fact my temper was good enough that I didn’t mind paying to park. We had hoped to park along the short road that leads to the baths, but motorhomes were forbidden and in any case there were no available spots. At the end of that road there is a big parking area with a height barrier – small vans would probably get through but not us. So we ventured about a kilometre away to the local private sosta; at €14 with electricity, toilets and showers it was not a bad price, and you cant blame them for cashing in on the popularity of the place. 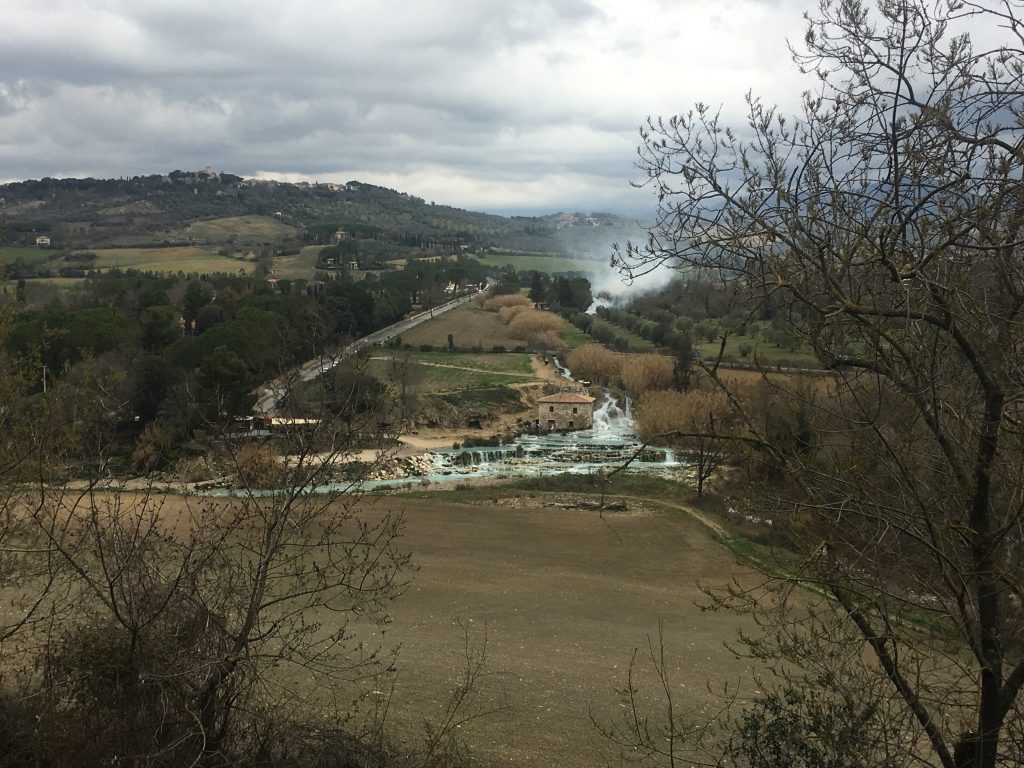 The view of the hot springs as we approached.

We walked down the road back to the baths. There were probably 20 people using them, with plenty of people coming and going while we were there. This was a nice number and allowed each group to lay claim to a pool without having to get too close for comfort with strangers. I cant imagine what it would be like in summer, I’ve seen pictures of people crammed hip to hip along the edges of the pools which would negate all pleasure in the experience.

We spent a couple of hours soaking, going prune-like in the slightly sulphurous water. The atmosphere was friendly as people moved slowly between pools trying to find their optimum wallowing experience. The pools nearer the falls were warmer or you could move further away for cooler water, some pools were effervescent and some had waterfalls that pummelled you, some chest deep and some shallow. The people watching was fun, all ages were represented from a baby with her parents to an elderly chap sat on a folding chair in the shallows just bathing his feet. Lots of people just turned up in their cars already in dressing gowns over bathing suits, others did that slow and clumsy ‘under the towel’ dance.

It was such a refreshing and different experience. I would really recommend searching out any hot springs on your travels. Don’t worry about the eggy smell – it’s worth it!