As we drove south through Tuscany the land slowly flattened out. From the steep sided closely packed hills of the north we ventured through lower hills and wider shallower valleys until it seemed almost flat. But appearances can be deceiving, we were still a couple of hundred meters above sea level, and as we approached Sorano we rounded a bend in the road to see a town perched on a clifftop above a dark forested river valley cutting through the land.

Hilltop towns had been very much a feature of Tuscany, and here in the province of Grosseto the tradition of fortified defensible towns continued with the clifftop ‘Tufa Towns’  of Sorano, Pitigliano and Sovano. Tufa (although it should properly be called tuff) is the volcanic rock that underpins the landscape here – a soft rock that is easy to excavate, which gives rise to some of the archeologic features.

Of the three towns we randomly chose to visit Sorano, like the other towns it had been established by the Etruscans and although their legacy isn’t visible in the town it can be found in the surrounding area. We parked up by the Orsini fortress which dominates the top part of the town. It wasn’t open to visitors but we were still able to walk through it’s courtyard and see the view down towards the medieval buildings of the town below. We wandered down through the narrow streets, down mossy steps and cobbled slopes. It felt like walking through a ghost town, doors and shutters were pinned closed and we could only hear our footsteps. When we tried to get to the viewpoint of Masso Leopoldino the gate was firmly padlocked, it didn’t matter though as there were plenty of other viewpoints through the town. 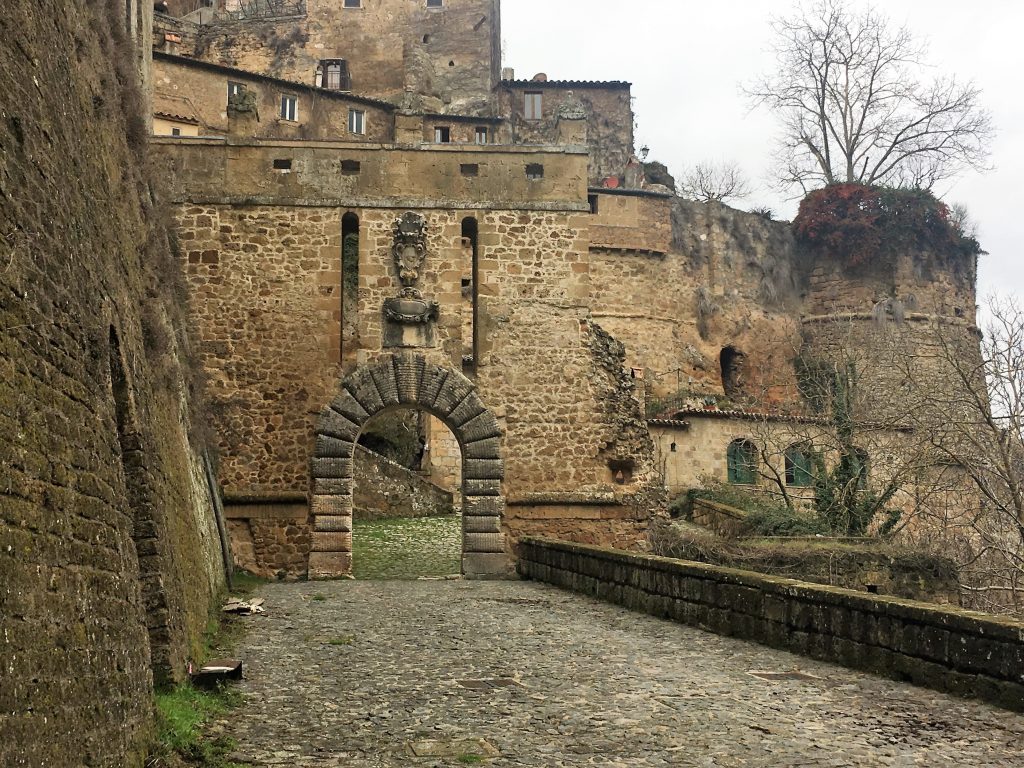 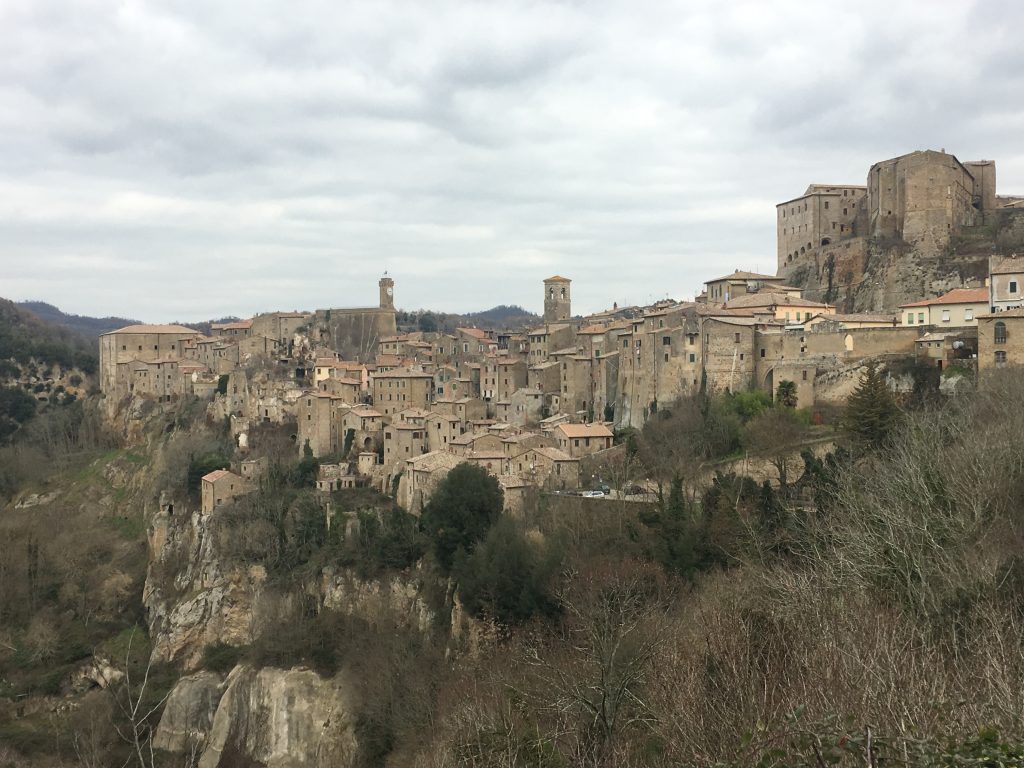 View of Sorano from the west 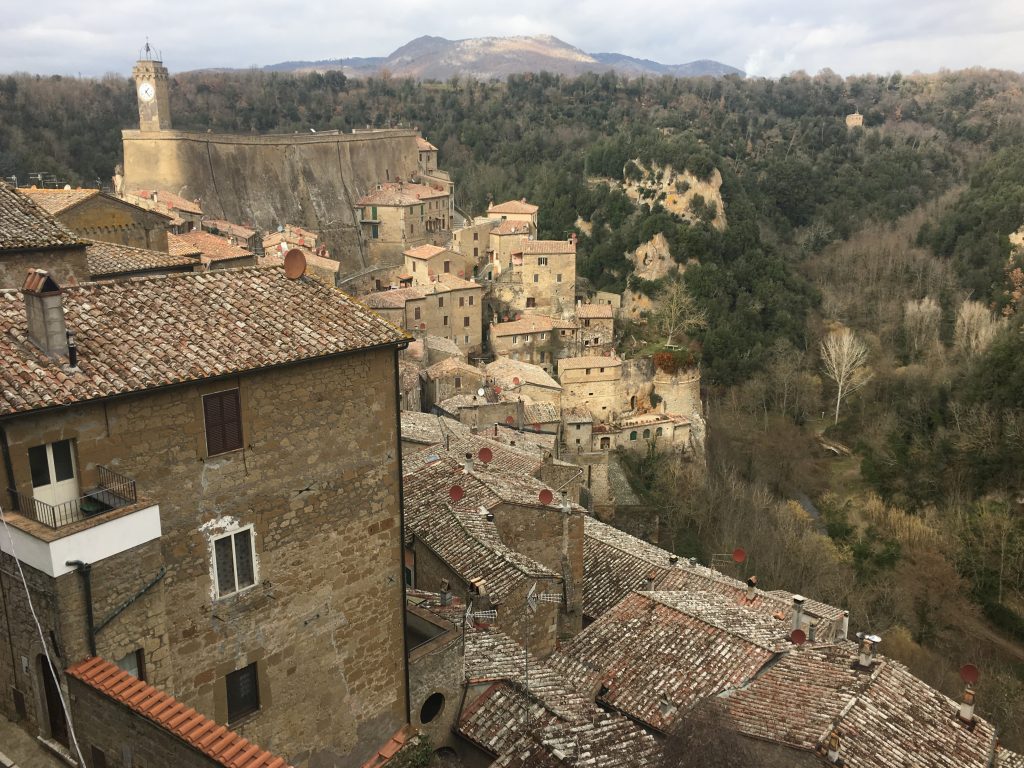 View of Sorano from the Fortezza Orsini 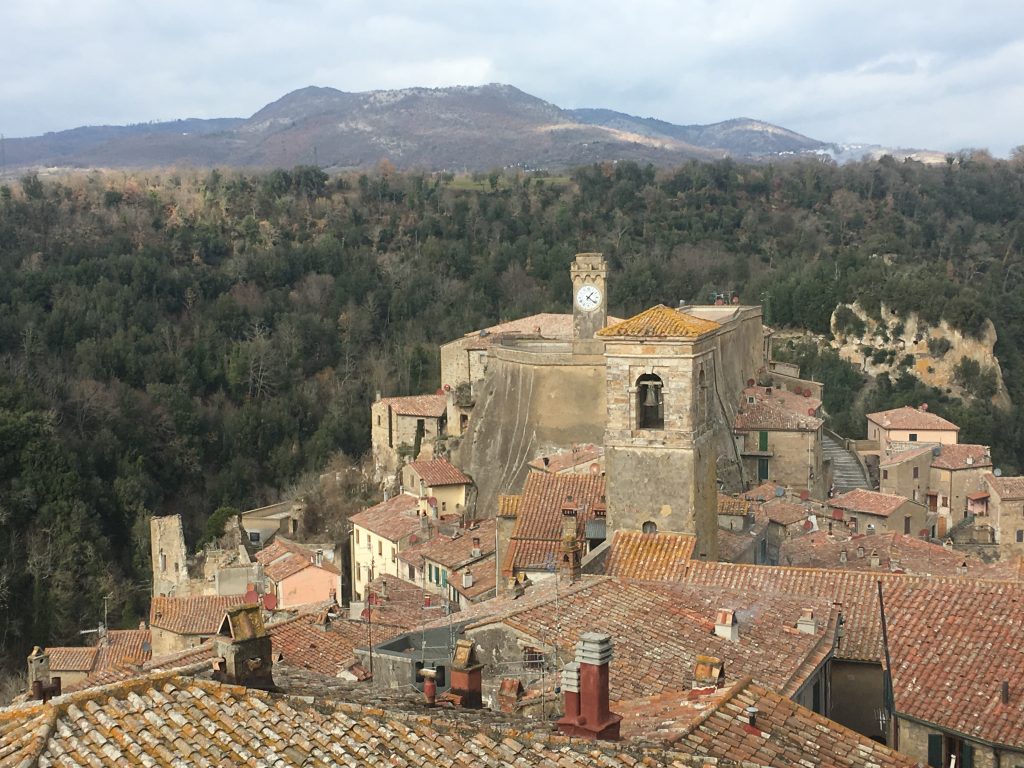 After a few wrong turns we found the Porta di Rocco on the lower eastern side of the town and we could escape the buildings and descend to the river below. This was what we had really come to the area to see. Down here are ancient pathways deeply carved into the rock – the Vie Cave – it’s thought they are Etruscan in origin, but no one knows why they were cut so deeply into the rock. They link together the towns of Sorano, Sovana and Pitigliano – we didn’t go that far but allowed ourselves to get lost and turned around exploring the three main pathways that spread out from Sorano. There was something eerie about being between the confines of the pathway walls, the ghostly feeling enhanced by the rock cut caves and burial chambers that could be found in the surroundings. 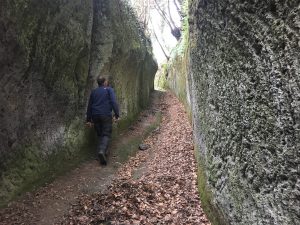 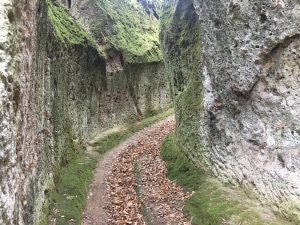 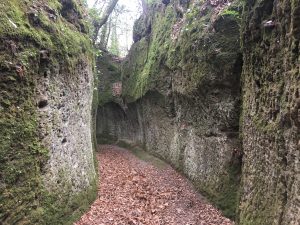 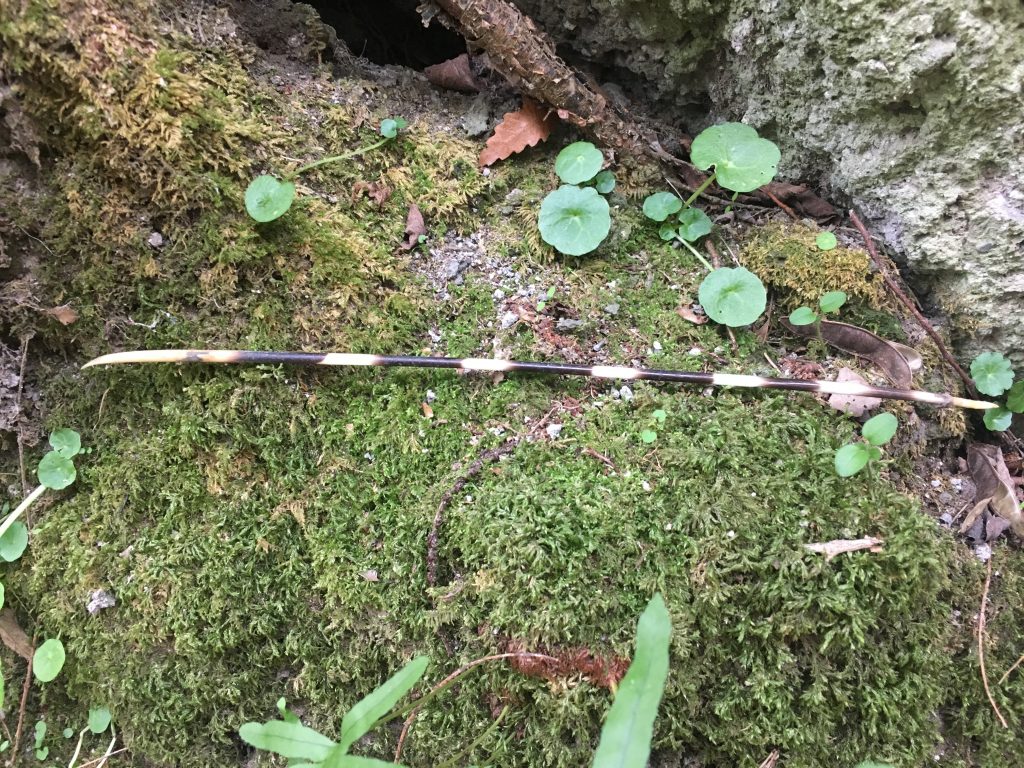 Emerging from the Vie Cave we could then head in the opposite direction to the troglodyte town of Vitozza, an archeological area of many cave dwellings from different periods. Spread out through the forest it was not well signposted, or at least we didn’t find any informative signs, but we had not approached from the usual direction. We felt that we were probably missing some interesting sights and should have given the area more time, but it was starting to get a bit dimpsy so we needed to get back. 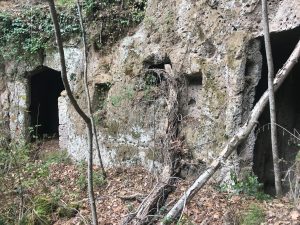 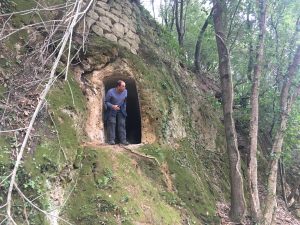 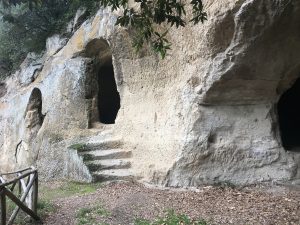 Approaching Sorano from below you can see how precariously the houses perch on top of each other, on top of the ancient walls and all on top of a cave riddled cliff. We wandered back up and through the more modern part of the town where we found evidence that there was a local population and a few shops and bars. Our parking near the fortress was the school bus drop off/pick up point so we investigated, and later moved to, a different parking spot as we didn’t fancy being woken up too early. 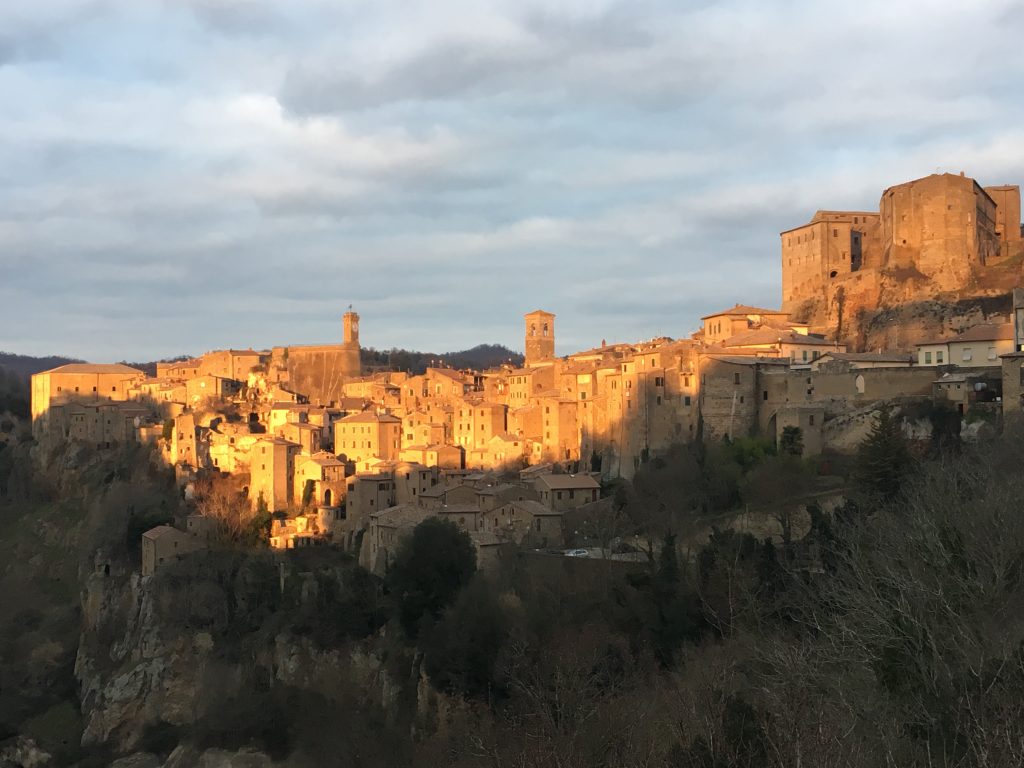 From our parking spot we could watch the setting sun shine on the town.

We put this on our list of places to come back to and explore further. Pitigliano is a bit bigger and looks like it has some interesting buildings as well as it’s historic Jewish quarter, Sovana has an archeological park with more Etruscan heritage, there is a mountain bike trail around the area taking in some of the sights which looks like it could be interesting and of course many more miles of Vie Cave to explore. You could easily spend a week in the area exploring these three towns.