We moved on from Greve-in-Chianti to find something less strenuous to occupy our time. Tuscany has a number of hot springs and so we thought we’d see if we could find somewhere for a soak.

Not Bagno Vignoni though. This village has a hot spring that fills a large rectangular pool in the centre of the village. At this point it’s about 50 degrees, lovely, but no bathing allowed here. From the village centre the warm water flows through the local spa hotel before cascading down the side of a hill to the public pools which are tepid at best. It’s probably very refreshing on a hot day but not in the middle of winter. I suppose we could have paid to go into the spa, but we’re far too tight for that.

Instead we spent a few hours wandering around the village with many other people enjoying their Sunday outing. We hung out for a while in one of the cafes that were situated around the edge of the village’s central pool. You could feel the warmth from the water, not a fierce heat but just slightly less cold than the surroundings. Steam rose gently above the pool, visible only when the air was very still, and the spring bubbled under the surface of the water. The pigeons enjoyed splashing in the pool even though we couldn’t. 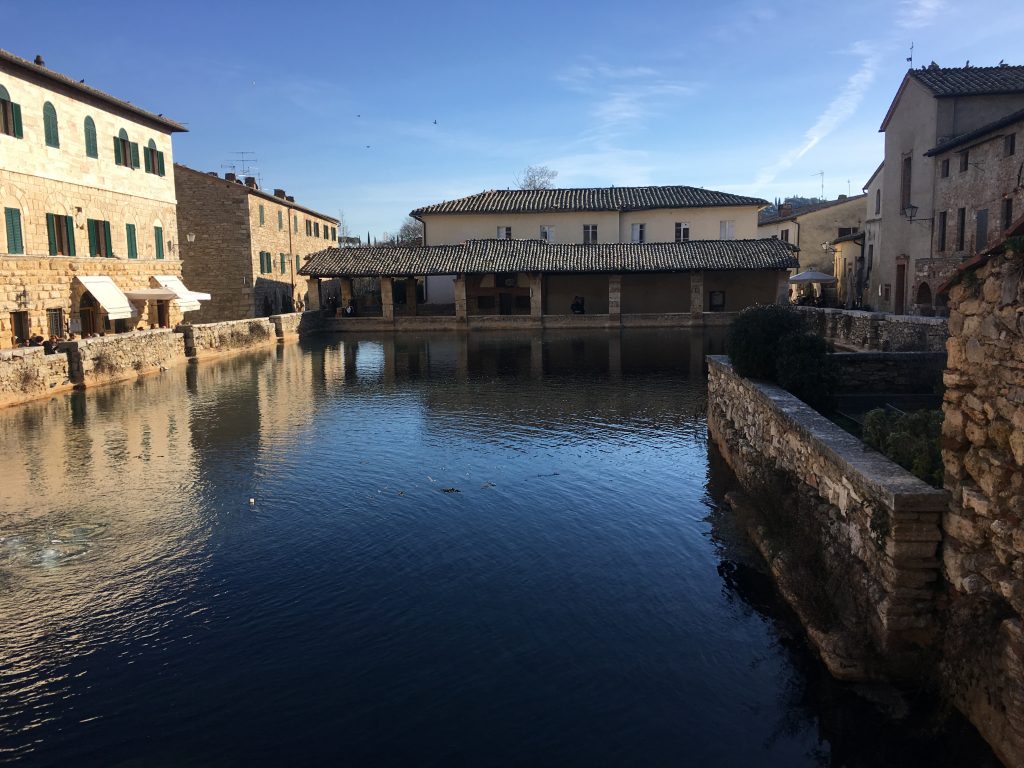 Views of the pool at the centre of Bagno Vignoni 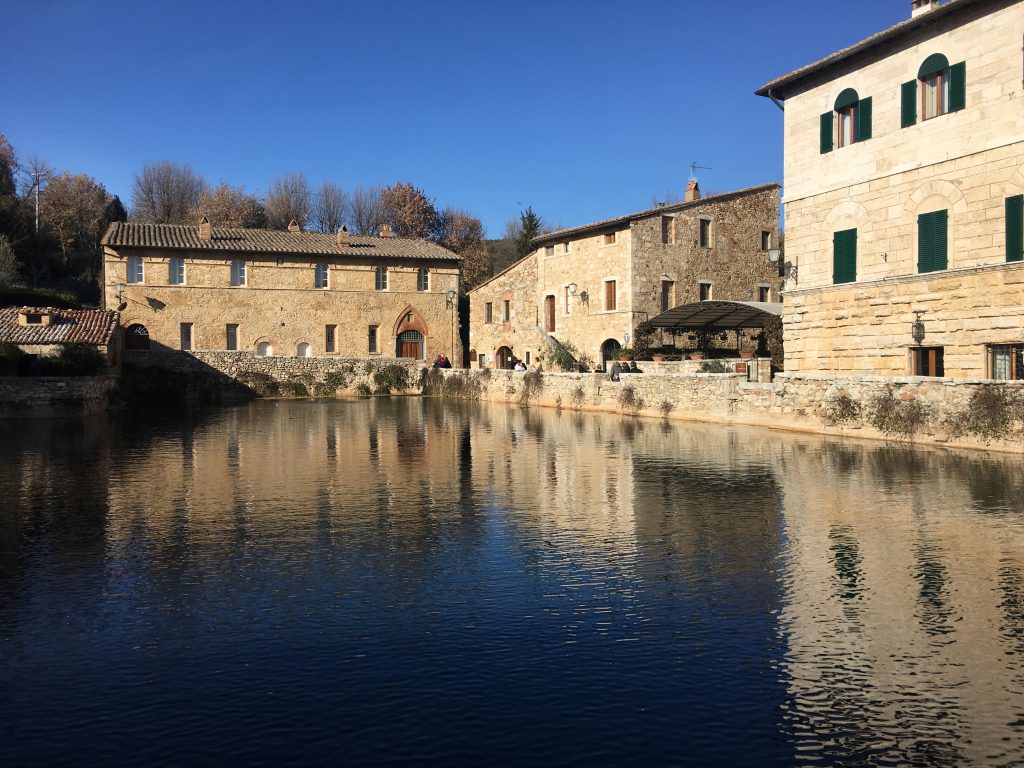 From the village centre we followed the path of the water down past the spa hotel and into the Parco dei Mulini. The water made it’s way through narrow channels cut in the rock to the ruins of the mill. We tested the temperature of the stream here and it was still pretty warm, but the channels were too small for anything more than a quick dunk of the feet.

We followed steps down the small cliff where we could see the water splashing over waterfalls, the rocks here had a thick coating of yellowish sulphur deposits left by the water. There are four mills in this park, set on top of each other with the lower mills set into caves and carved into the rocks, if you were happy to squidge through the mud and be dripped on from above you could take a look inside. 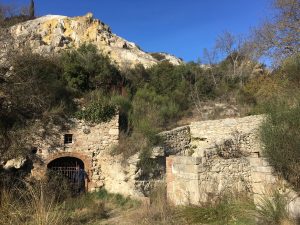 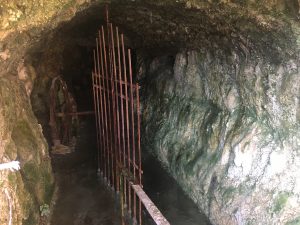 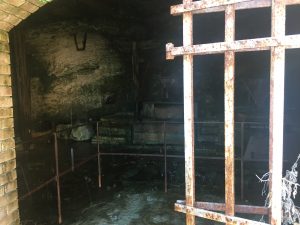 Further down there are two pools where the water is shallow and much cooled. These are the public bathing areas, although I’m not sure they are in use any more and I couldn’t persuade Paul to take a dip. From here the water runs into the river valley. It’s relative warmth is still evident in the amount of vegetation that grows along it’s channels, and even in the middle of winter we could see frogs jumping. 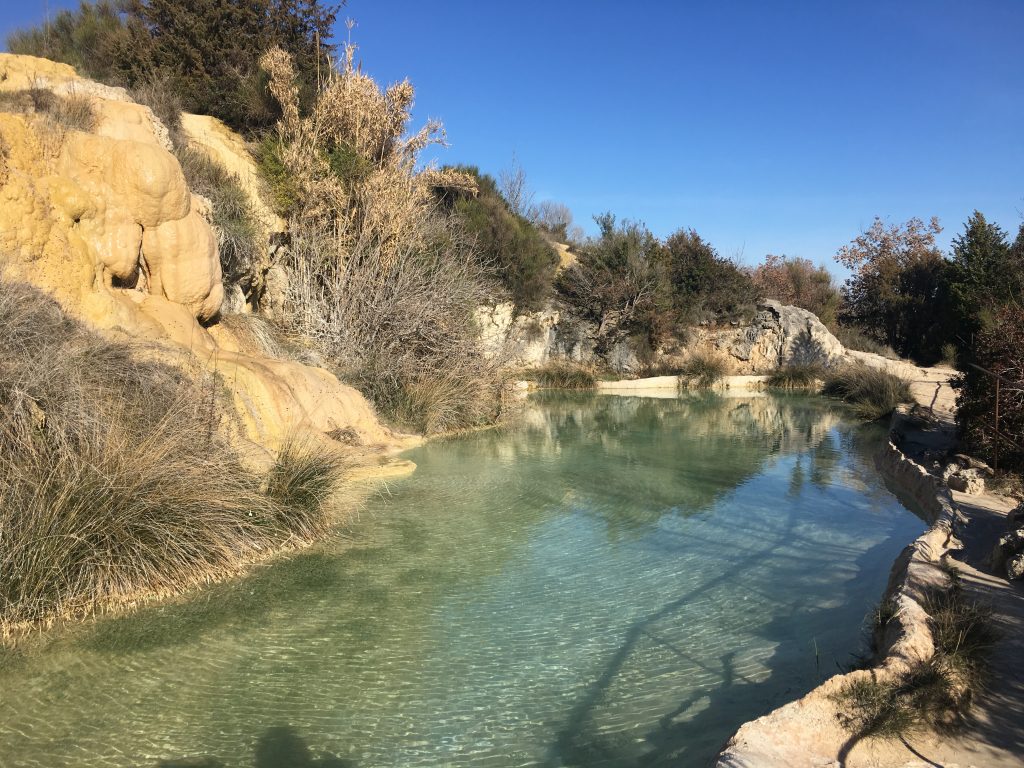 One of the pools with it’s beautifully clear water 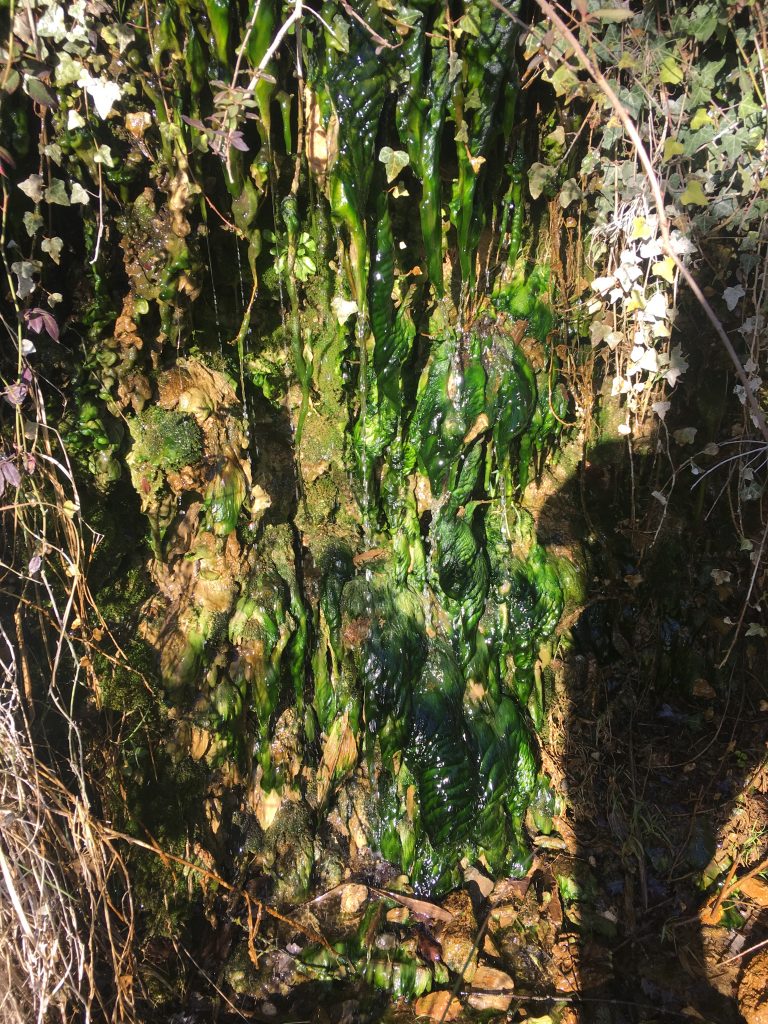 After our easy perambulations around the village we decided to stay for a second night and the following morning we felt up to something a little more strenuous again. There are many walking routes leading from the village, all well signposted. We walked uphill from our parking area, following a track up to a small fortified village of Borgo di Vignoni with it’s keep, church and walls, then onwards along a section of the Via Francigene, an ancient pilgrimage route from Canterbury to Rome. We turned off this path to follow a deep cut track between high ferny banks – very reminiscent of Dartmoor – which eventually led us towards the Castello di Ripa d’Orcia, before dropping down to the river and following it back to Bagno Vignoni. 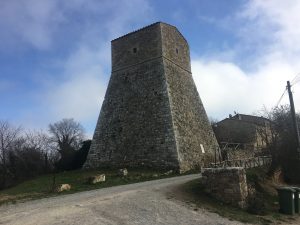 The keep at Borgo di Vignoni 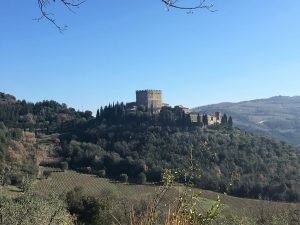 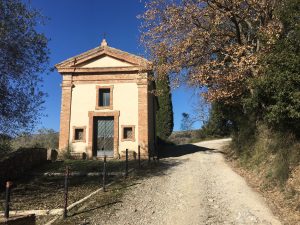 Chapel on the way back to Bagno Vignoni

This area was beautiful, Bagno Vignoni gave a tourist’s eye view of Tuscany with all buildings perfectly maintained and the streets beautifully laid out. In contrast walking around the area took us to some more rural areas with farm buildings much more ‘lived in’. All in all Tuscany was shaping up to be a fabulous area to visit.