These blog posts may get a bit samey…visit a valley in the Aosta region, cycle a bit, walk a bit, see some marmots etc etc. if they get a bit dull then all I can say is that it doesn’t reflect the amazing time we’ve had in this area. We never get bored of mountain views, snow, ice, meadows, rivers and nature all around us, but it gets a bit difficult to find new ways to describe them.

We withdrew from the Cogne area to re-stock with food and wine in Aosta. Aosta is a really nice city, but we have visited before while skiing and only ventured in for food shopping on this trip. We tried to get into the Lidl car park but found it rammed full of cars, so instead we parked with several other motorhomes in a parking area near the roundabout at the east end of town and walked to the shops to stock up on basics.

Our destination this time was Valsavarenche  – the next valley west of Cogne. Whereas Cogne is the tourist centre of the Gran Paradiso, Valsavarenche is the outdoors capital of the area, this is where most people will leave to summit the Gran Paradiso itself. Sadly we weren’t planning to ascend it on this trip, we would need to pay for a guide because we don’t have the experience to cross the crevassed terrain near the summit on our own. We have been higher, but that was on Kilimanjaro and Mount Meru in Tanzania, and those mountains don’t have glaciers on the ascent route (Kilimanjaro does have a glacier but it’s dwindling fast). Summiting an alpine 4000m mountain is on our bucket list though, so maybe next year.

Valsavarenche was a lot quieter that Cogne, we turned up at the sosta in the main village to find ourselves alone, next to the obligatory river and within sight of the usual flower -dotted grassy meadows. We popped to the town hall (municipio) to make our payment only to be told that they wouldn’t start charging until July. I wouldn’t have minded paying but I’m not going to say no to a free stop over when it’s offered up. Because we were alone and the weather was nice we decided to get the BBQ out to cook up a nice bit of steak for tea. What a treat that was, the Cadac has taken some getting used to but it cooked the steak perfectly, charred on the outside and still pink in the middle. We served it up with some barbequed sweet potato, which we cut into slices, dip in oil and griddle, it’s our new favourite barbeque veg. I’m salivating just thinking of that dinner. 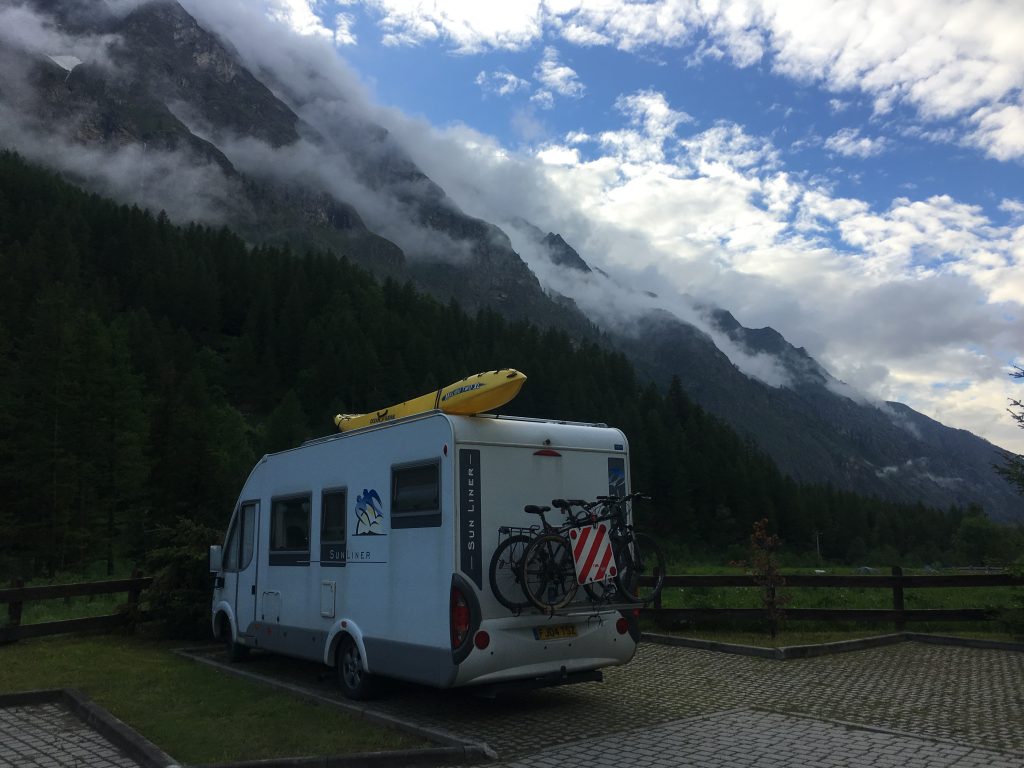 Bertie in the sosta at Valsavarenche 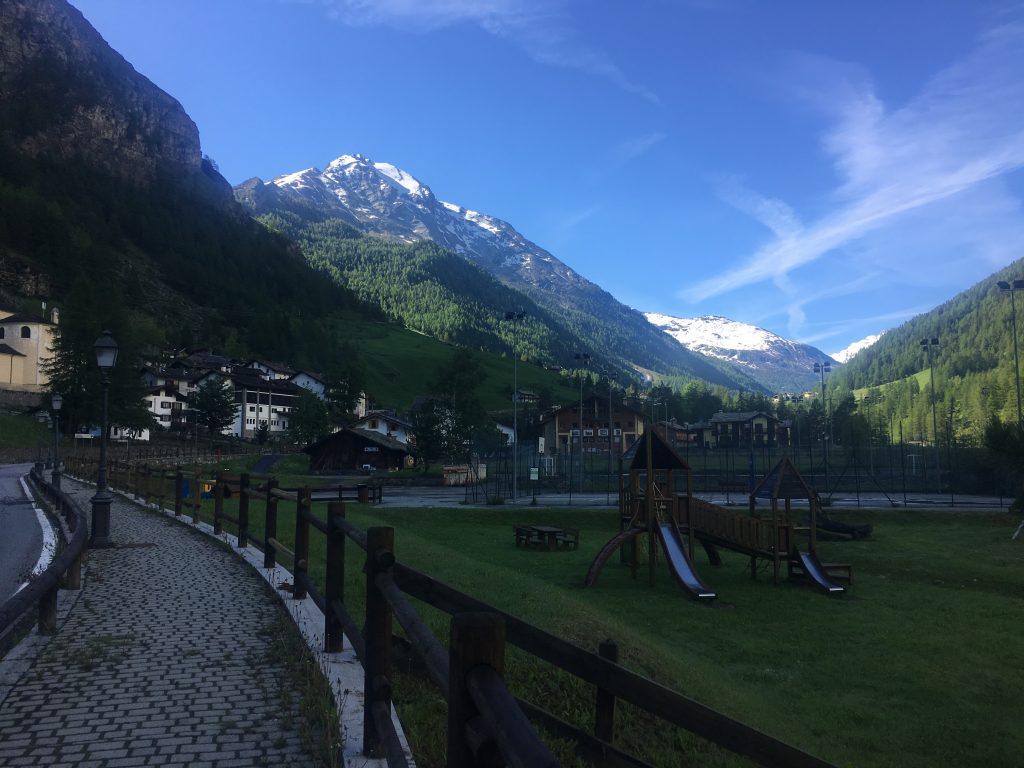 View from the sosta 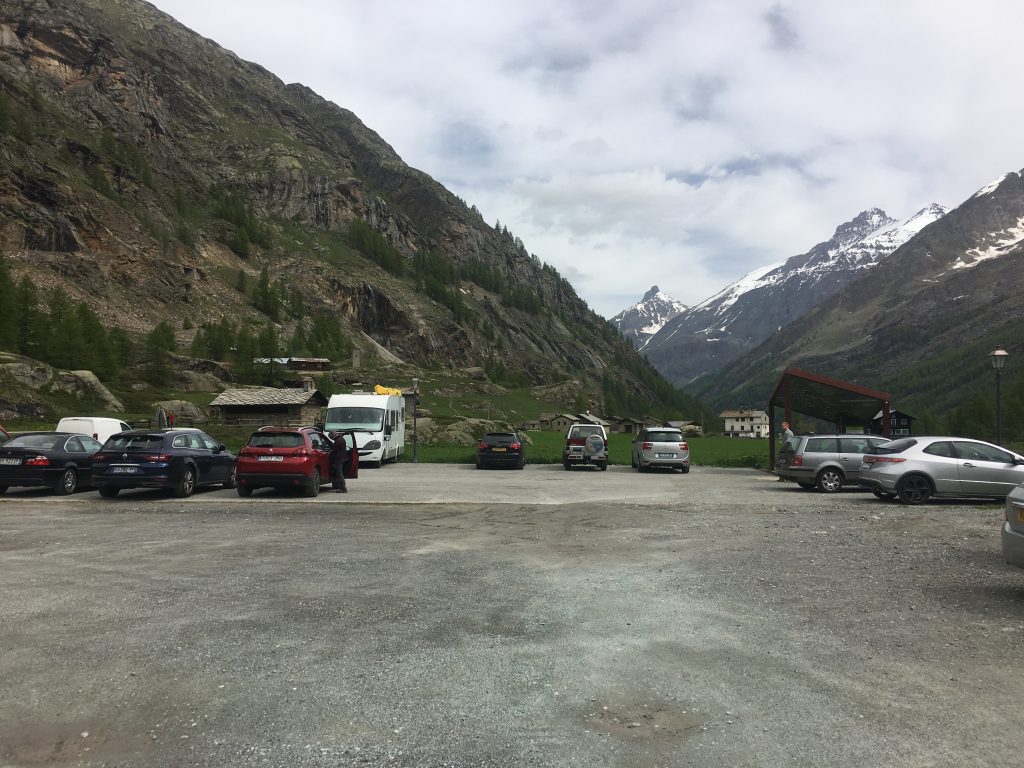 As well as being the starting point for the Gran Paradiso, Valsavarenche is where you are most likely to see Ibex. These large-horned members of the goat family were almost hunted to extinction before their population was protected and restored. The Gran Paradiso was one of only two areas where Ibex still existed at their lowest population point. The national park was the hunting preserve of the first king of a united Italy, Victor Emmanuel II. His hunting practises both killed and preserved the species (an argument that is often used by hunters of trophy animals today, but today we should be much more enlightened). Nowadays they aren’t hunted and as a result you can seem some older specimens with their unfeasibly long horns that  look as though they would weigh down the heads of the animals. If you want to see some examples of Ibex horns for different aged animals then there is a good display on the outside wall of the municipio in Valsavarenche (it’s on the wall that faces away from the road and towards the river). We were lucky enough to see a male group (probably the same group) several times in the areas at the head of the valley. 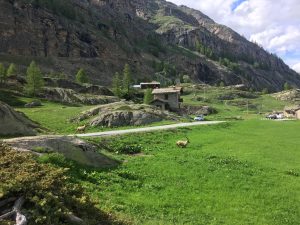 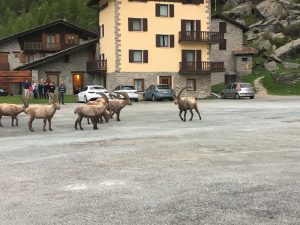 Our initial foray into the Valsavaranche was on our bikes, we just took the road up to the head of the valley and then zig-zagged up the man made track (route number 4) on the side of the valley. There was a large amount of avalanche damage here and I really didn’t like the looks of the rocks that teetered on the edge of the trail, ready to fall down on the path below. At one point the top of an electricity pylon had been dragged down to the opposite side of the valley and the wires had been temporarily suspended on lower poles. At the head of the valley we popped to the campsite to see if it was open and saw a herd of Ibex crowded onto one of the large boulders that were scattered across the camping area. 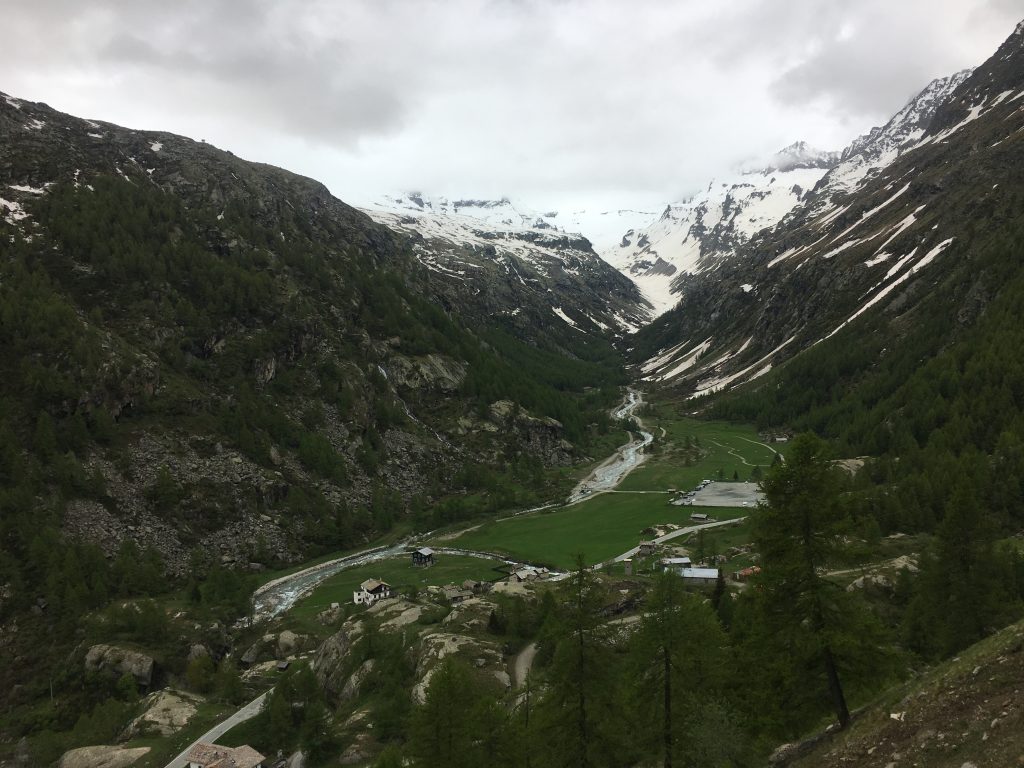 The views from our bike ride

A Walk to the King’s Hunting Lodge

This walk was a circular foray up to Victor Emmanuel II’s hunting lodge at Orvielle. It followed trail number 8 from the village up through the forest, a trail that is also used for snow shoeing in the winter. This trail did feel a little interminable as we zig-zagged upwards through trees on a humid day. Wood ants were out in force scurrying around the forest floor carrying their treasures back to the nest; it was difficult to find a spot where we could sit down for a break without ants coming to investigate us.

On our  back and forth route we crossed an avalanche corridor several times, massive rocks had taken gouges out of the soil where they had been flung down the slopes and trees lay in neat lines following the line of descent. Occasionally we had to cross the snow where it had been laid down thickly by repeated avalanche action. I’m sure it’s probably melted by now. 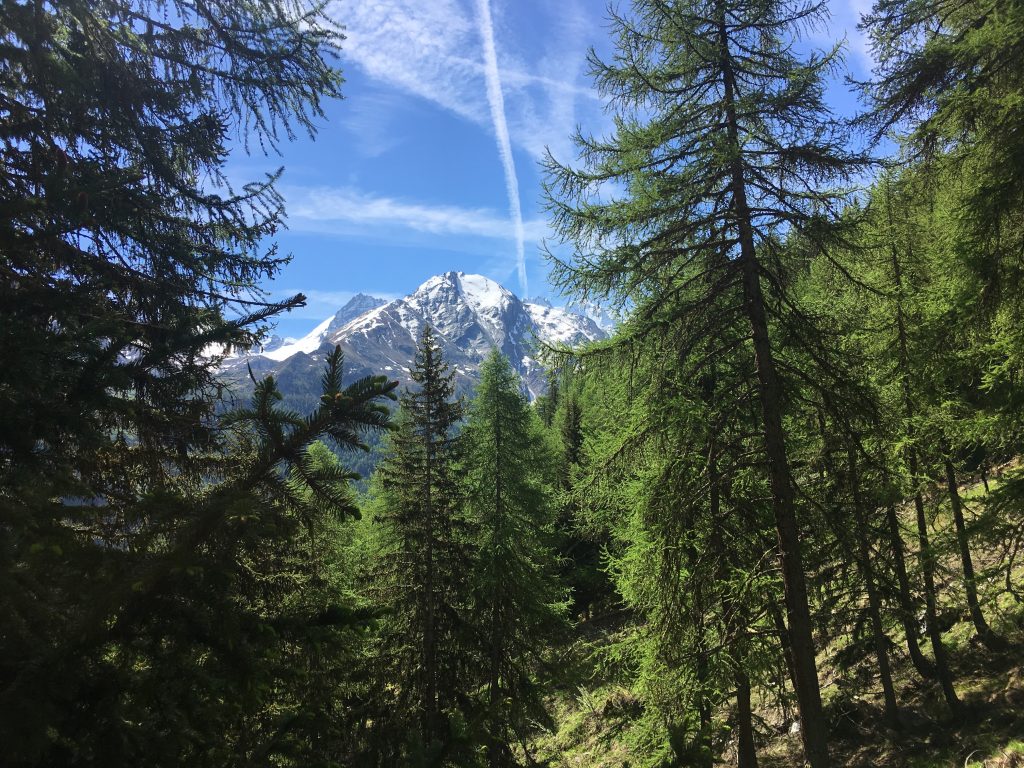 View through the forest

The hunting lodge was enclosed by a fence which said that access was forbidden, we stopped here for a bit of lunch and I said to Paul that I would take a photo from a small rise that was on our onward route. I completely forgot though because an Italian came bounding over to us to show off his photos of Ibex around Lago Djouan. They were great photos and I didn’t have the heart to tell him that we’d seen a herd down in the valley the previous day.

We left Orvielle to follow route 7 back down to the valley. Oddly this wasn’t very well signposted, but we managed to spot the obvious path where the trail broke off. This trail went more steeply downhill than the ascending path, past the abandoned buildings of the hamlets of Le Carre and La Ruya. We emerged in the valley at Le Cretou and walked back to Bertie through the wild flower meadows alongside the river, surrounded by butterflies. 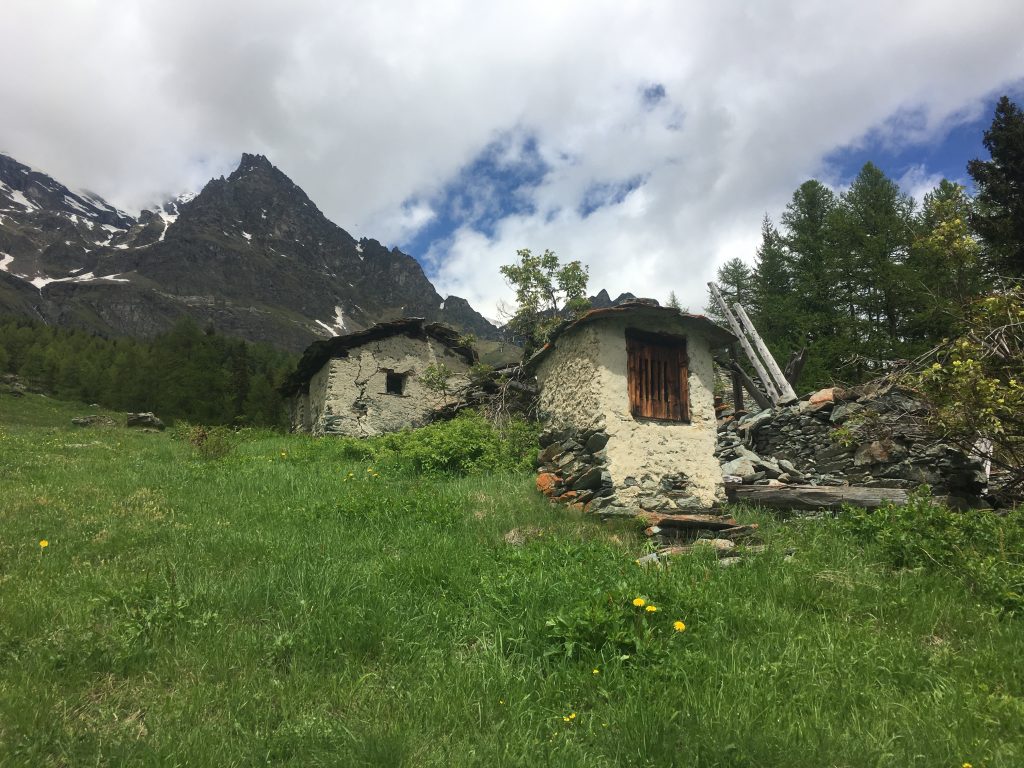 Halfway up the Gran Paradiso

We might not be able to make it to the summit of the Gran Paradiso, but we were definitely going to get as high as we could on the route. We headed up route number 1 with the aim of reaching Refugio Vittorio Emmanuel II. We weren’t alone on this route. We had watched many people ascending in the late afternoon of the previous day, taking their snow shoes, crampons, ice axes, snowboards and skis up to the rifugio where they would spend the night before an early morning ascent of the Gran Paradiso and possibly the excitement of a fast descent on skis. When we started up the path there were plenty of casual walkers just going up to the waterfalls or the hut along with us. There were also the first few people descending from their early morning summit exploits. It was a bit of a shock compared to our previous walks where we had only encountered one or two other people and reminded us of walking in the Lake District or Snowdonia. 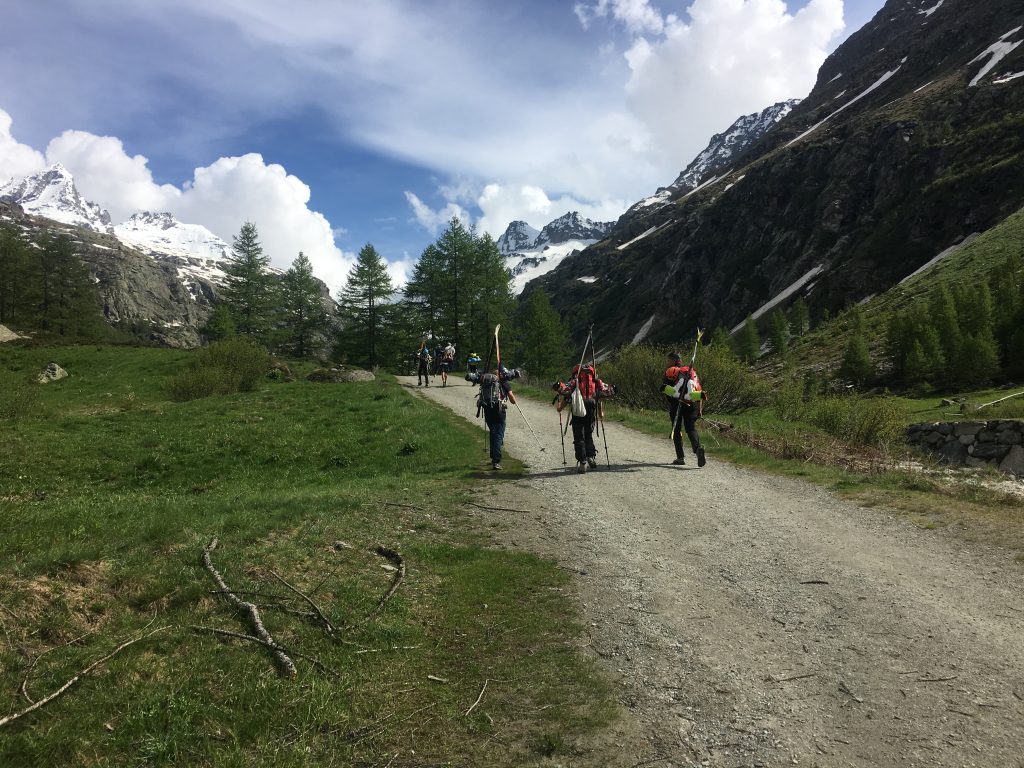 Skiers on their way up to the mountain lodge

The initial part of the trail followed the river before turning upwards and following tight hairpins up a well constructed and well maintained path. The zig zags gave us glimpses of the valley and the large waterfall that tumbled down the gully next to us. We quickly emerged from the trees onto the open mountain side and increasing amounts of snow covered our path. However the large numbers of walkers meant the path was well trodden and easy to navigate. We pushed upwards over deeper and steeper snow, at one point we watched people descending a steep slope by sledding down on their backsides. I told Paul there was no way that I was doing that, but still we somehow managed to descend by that route! We could see plenty of ski tracks over the snow and by the time we reached the rifugio we had seen skiers, it didn’t look like it was difficult skiing, but there were plenty of rocks just under the snow that I wouldn’t want to encounter (plus the whole thought of carrying skis and BOOTS up was just exhausting). 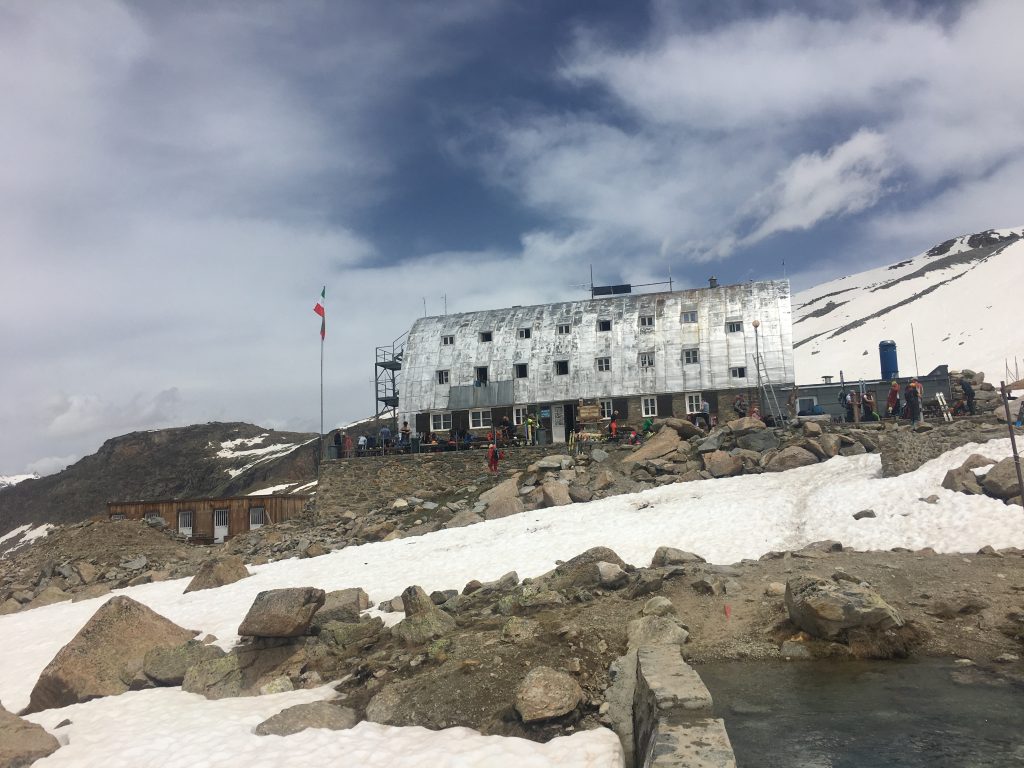 The refuge was at 2710m and there was no way we were getting any higher as snow was lying thick on the ground. The building was a cut above any of the other mountain huts we had seen so far, a large building with an arched roof which could hold 120 people. It was busy with people on it’s sunny terrace, some settling in for the day and others packing up their kit to come back down the mountain. 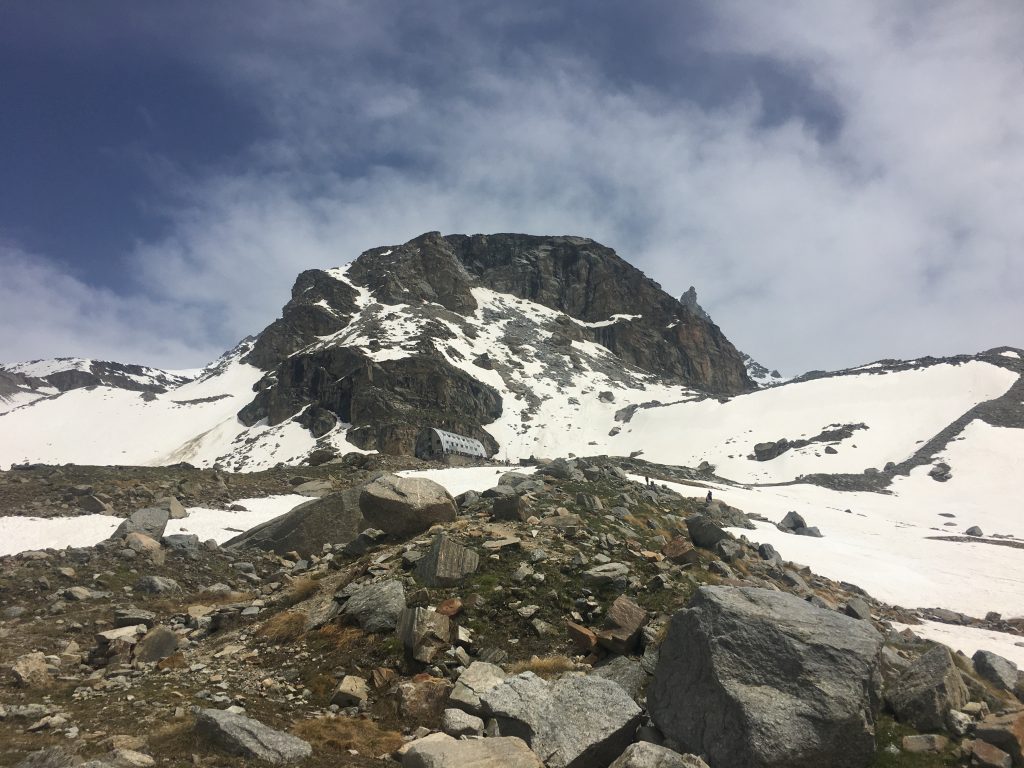 Looking back towards the rifugio