South of the Aosta Valley is an offshoot of the Alps, Italy’s first national park. It is named after its highest peak – Gran Paradiso – the only mountain over 4000 meters that is wholly in Italy. We started our visit to this national park by heading towards Cogne (pronounced con-yay with that nasal ‘gn’ sound that you find in words like Gnocchi or Cognac). This pretty town nestles in the confluence of two valleys; where the valleys meet there are broad meadows with steep mountains on all sides. It looked idyllic when we arrived, the sun was shining and the green of the meadows was vibrant against the blue of the sky. The snow capped mountains at the ends of the valleys were picture perfect.

It was a Sunday and the town was lively with weekend visitors enjoying the good weather. The cafes, restaurants, delis and bakeries were open for business with chairs and tables out on the cobbled streets. Shops were selling outdoors equipment and gifts. The whole town had a lovely vibrant atmosphere and the timber framed traditional alpine buildings gave it a warm and homely (maybe a little bit twee) feel. 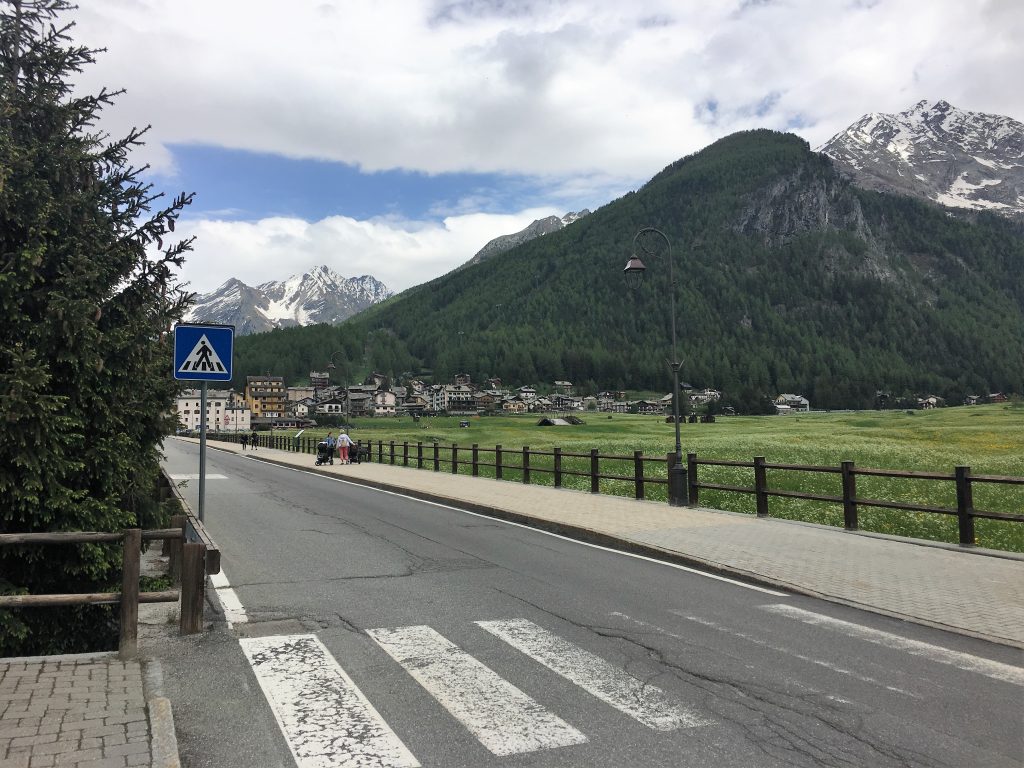 The sosta in Cogne is situated next to the river and we spent two nights here before moving onto another sosta in nearby Lillaz. Both are run by the local authority and are free to park in during the day, but cost 10.50 euros for an overnight stay without electricity in low season. So not cheap, but they were large clean parking areas with services, and were well located. In Cogne there was even an elevator to take people up from the car park to the main street. We were looking forward to the evening collection of our money by the ‘girl with hair like embers’, as one review described her. She was indeed as friendly as the reviewer described but her red tinted dark hair was a disappointment; we were expecting a true red-head. 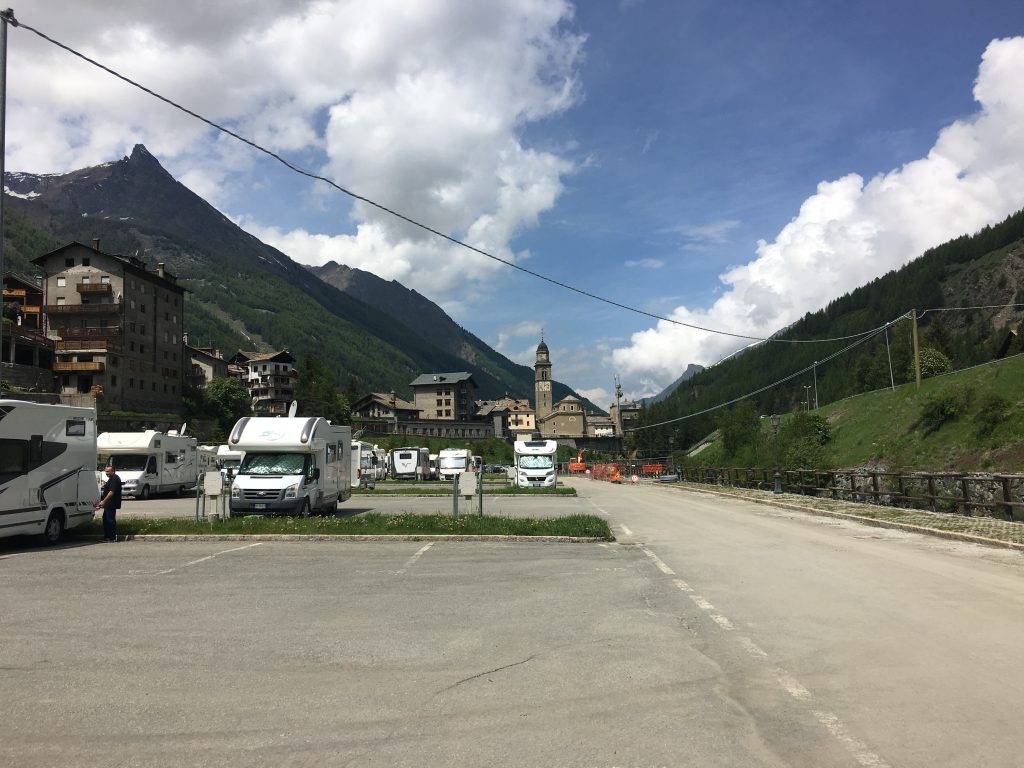 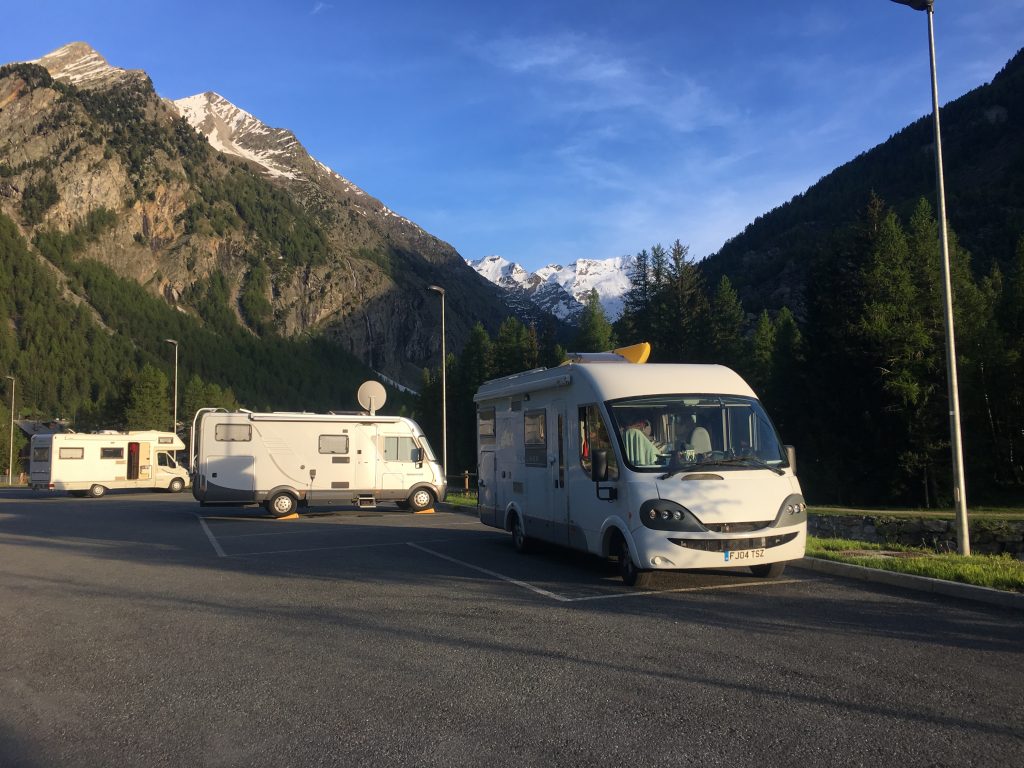 The guide books described the Gran Paradiso national park as tranquil, but this was not really a place for peace and quiet. The surroundings were all about the force and power of nature. Waterfalls, large and small, cascaded down rocky surfaces, rivers rushed and tumbled down valleys. On the slopes we could see the evidence of avalanches, fallen trees, rocks, even electricity pylons, and deep piles of snow at the bottom of avalanche corridors. In Cogne we had the additional noise of building work that was going on while we were there, plus some enthusiastic strimming one morning, at least it got us out of bed and gave us plenty of time to enjoy our days in the mountains.

On the Sunday we arrived we joined in with the rest of the tourists, strolling around town in a constant passagiata with the occasional stop for a bakery treat, drink or a bit of fantasy Solomon trainer shopping (Paul was mesmerised by the displays of all the possible colours). We popped into the tourist office to pick up a map. The lady was reluctant to give us the more comprehensive map and sent us off with strict instructions that we shouldn’t try to walk over 2200 meters and pointed out that the steep slopes of the Gran Paradiso national park made avalanches and rockslides far more likely than they were in the rest of the Aosta region.

There were about a dozen vans in the sosta on Sunday, but by Monday morning there were only four of us and Cogne felt a little more sleepy. Still there were plenty of shops open and we were able to stock up with baked treats for the coming days.

Our first outing was a cycle ride that followed the cross country ski trails  (trail number 23) in three directions from Cogne, first we cycled downhill to Epinel and back, then to Valnontey and back, and finally Lillaz. The beauty of these valleys is that they have fairly shallow gradients, meaning that you can choose how long and difficult you want your walking or cycling to be. This was a nice way to explore the area and decide how we were going to spend the next few days; we saw dippers in the river d’Urtier, deer near Valnontey and a fox in the woods near Lillaz. While we were in Lillaz we went to see the powerful Lillaz waterfall which has a wheelchair accessible path through a Geology park (a collection of boulders of different types of rock) to the bottom of the cascade, and other paths and viewing platforms higher up. 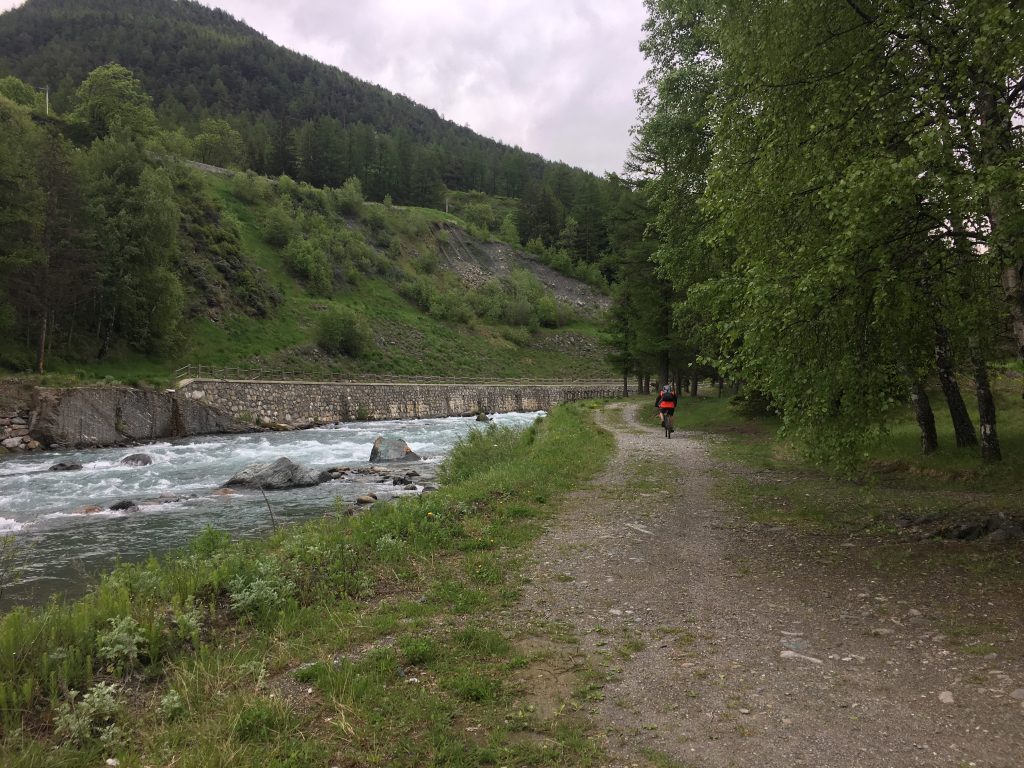 Walking the Valnontey – how far can we go?

There is a path from Valnontey that follows the valley up and up into the heart of the mountains. While we’d been cycling we’d decided that this part of the area had the most beautiful scenery and was worth exploring further. Because of the snow we were unlikely to get far up the sides of the valley, but the long and gradually sloping path next to the river offered an opportunity for a longer walk that wouldn’t get too high too soon. We drove to Valnontey where the carpark had ‘No Motorhome’ signs but we felt confident we would get away with daytime parking as the carpark was almost empty and we had paid our 3 euros at the parking meter.

The path (number 22) from here follows the river out of Valnontey village through a pleasant wooded valley where deer could be spotted drinking from the river or hiding behind the trees. Underfoot it was mostly dry, but snow melt and left some boggy patches where frogs had taken an opportunity to spawn and tadpoles were frantically swimming in the shallow waters. In the small and empty settlement of Vermiana was a noticeboard with the hours of sunlight, significantly less than most places (about 5 hours less in June) due to the shadow of the valley walls. 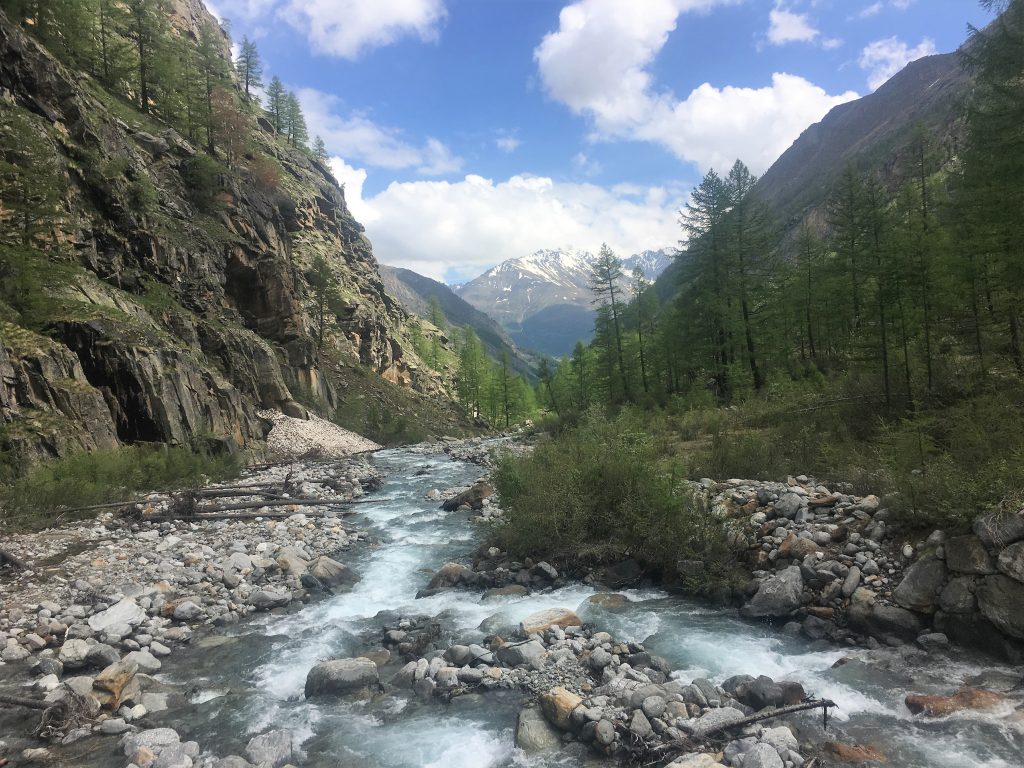 Following the river from Valnontey

As we escaped from the tree cover we found ourselves increasingly on snowy terrain. Marmots were here enjoying the open slopes. The slope of the valley was still quite gradual but we were finding it increasingly difficult to find the path amongst the snow and streams. In the end we made it to the final bridge at just under 2200 meters, but decided not to continue any further up paths 22D, E or F. We stopped to take in the views of the many glaciers that were draped across the mountains at the head of the valley before we re-traced our steps back to Valnontey. 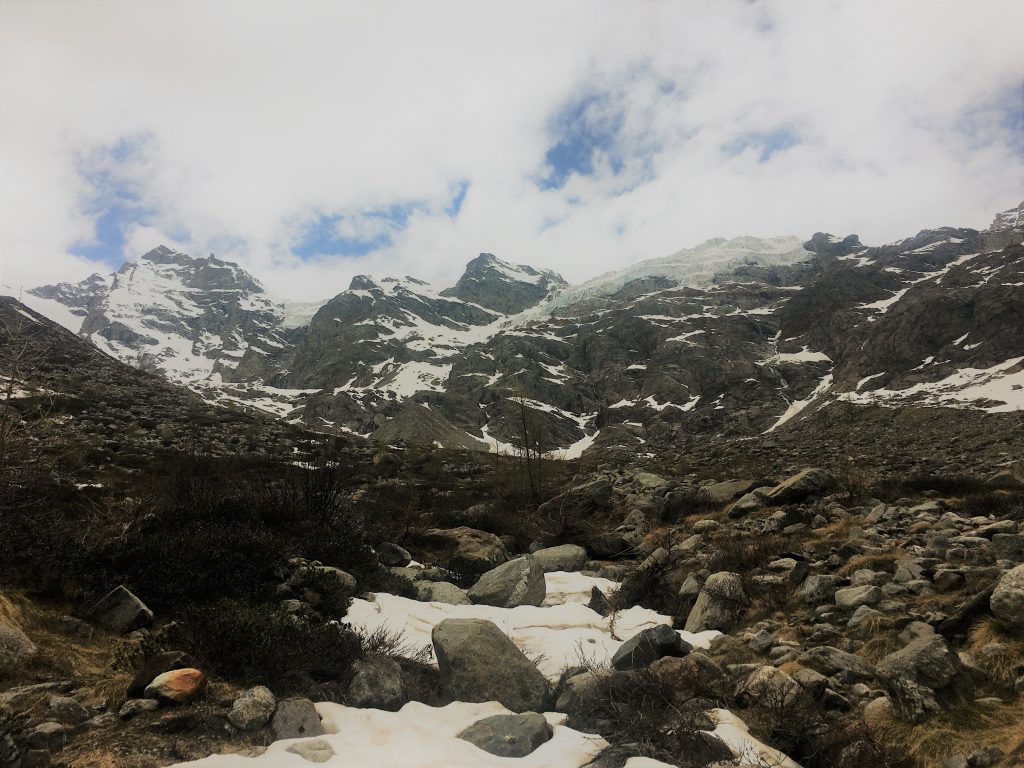 Glacier on the mountain 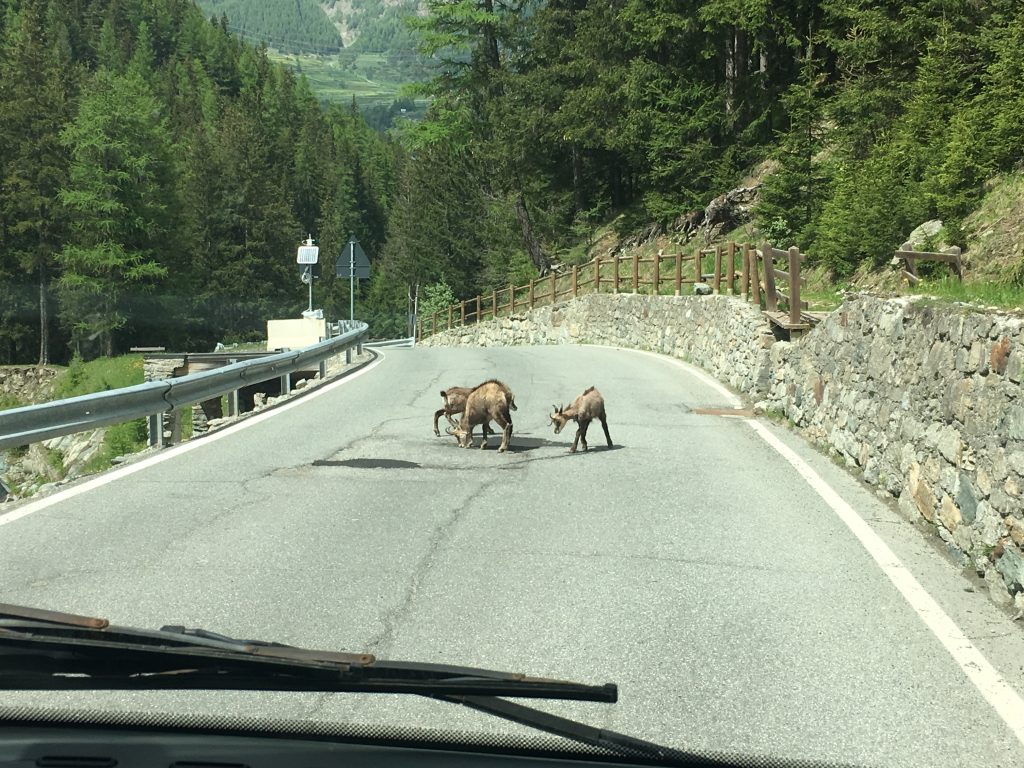 Deer on the road from Valnontey

From Lillaz we decided we would try to make it up to the Lago di Loie. At 2346m this was higher than we had reached the previous day and we knew it would be snowy. We followed path 12 which took us steeply up via the Lillaz waterfalls and then followed other cascades. When we looked back at the path we had followed it seemed impossibly steep, but as we clambered up the rocky path any exposure was negated by the tree cover. 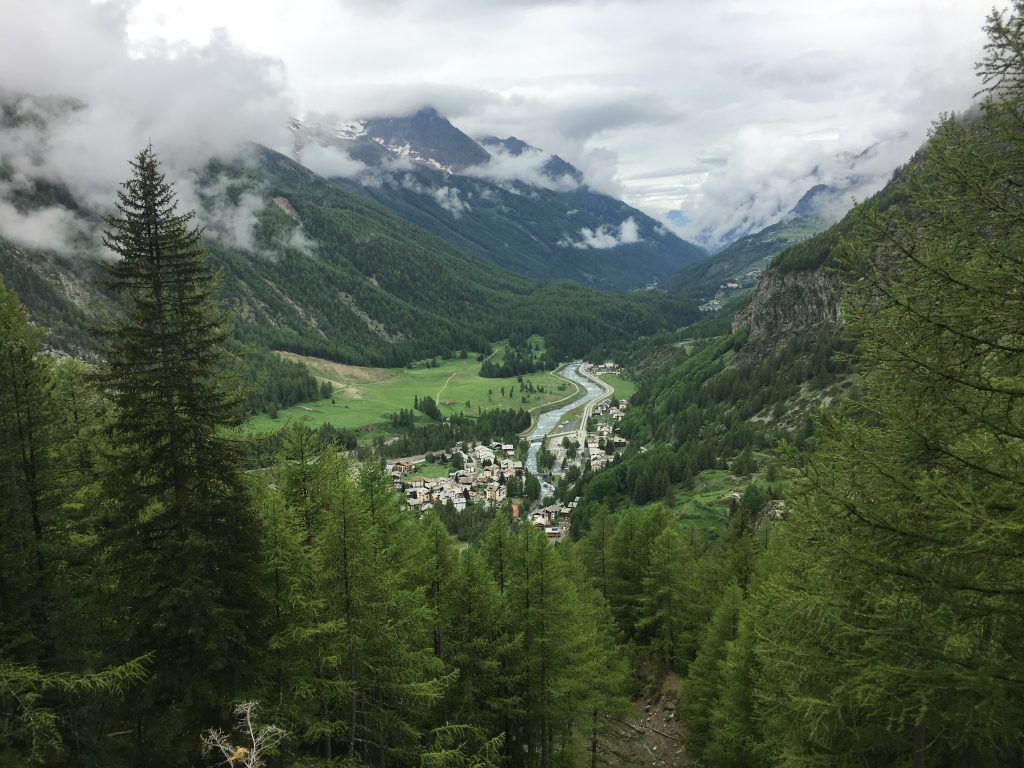 On the way up we met a Canadian couple who told us that the route to the lake was impassable because of snow. We looked at their trainer clad feet and weren’t surprised. They had tried to walk around the snow patches whereas we would most probably walk across them.

The steepest part of the walk was under the cover of trees, and when we emerged from the forest we were in a snow filled bowl which the path crossed diagonally before it followed a wide gully up to the lake. Walking across the snow was easy enough, but the steeper gully was more of a challenge and we didn’t want to find ourselves falling through the snow into the stream below.  We kept to the right hand side and managed to pick a way across snow and grassy slopes until we found the path again close to the lake. 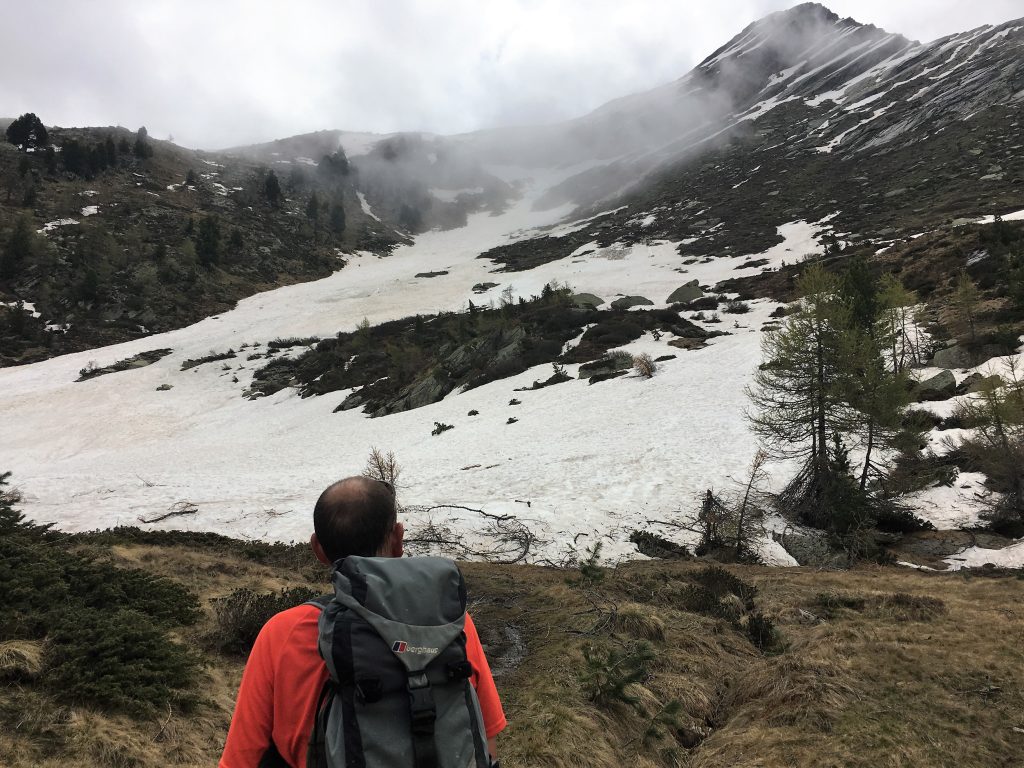 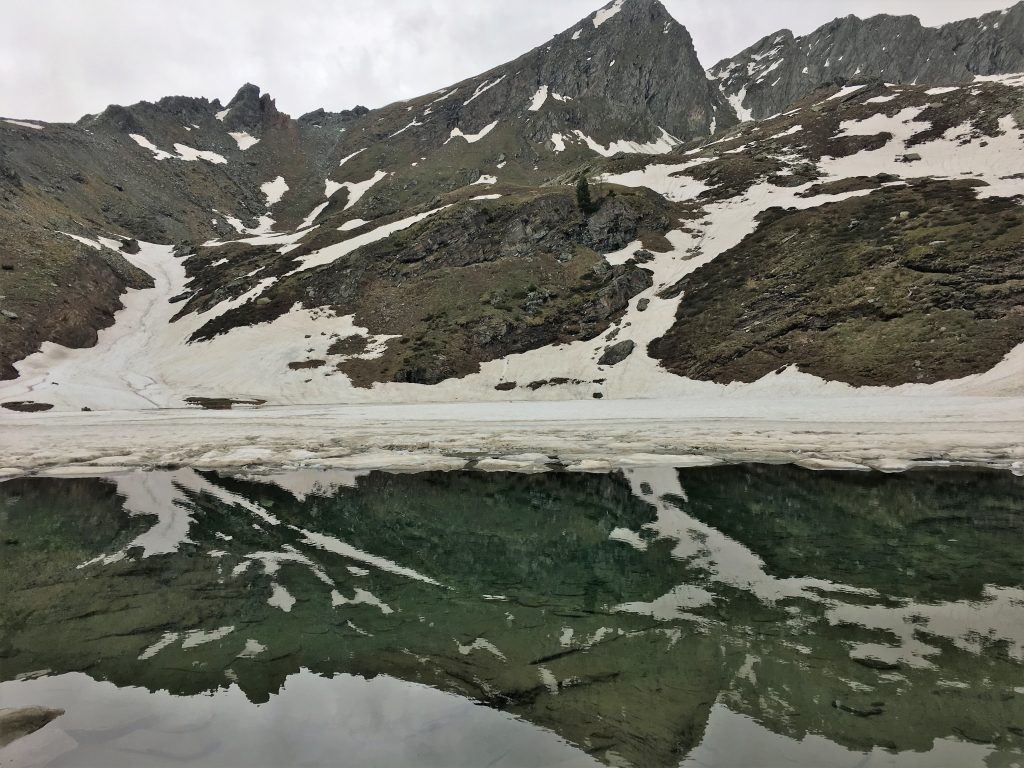 The lake was partially thawed and quite beautiful – it was a shame that the weather had turned a bit grey, but we were still able to see the mountains reflected in the water. Where the ice had melted we could see frogs lethargically swimming through the water. It’s quite amazing that they manage to live in such an inhospitable environment.

From the lake we were able to continue to follow path number 12, other people must have recently trodden this path because we could see footprints in the snow and the holes left by walking poles. The walk down was longer but less steep, we saw more deer and marmots as we descended though high meadows until we reached the river Bardoney. Here we picked up path 13 (also marked as long distance path 2 – the long distance path numbers are in triangles) which took us back down to Lillaz. This path followed the picturesque gorge of the Bardoney and then the d’Urtier river until we reached a point where we had views of the Lillaz waterfall and our original route up. It was a shame that it started raining as we descended because the scenery was stunning, but the rain made us put our heads down and plod for a bit. However this round trip was a delight and one I would do again. 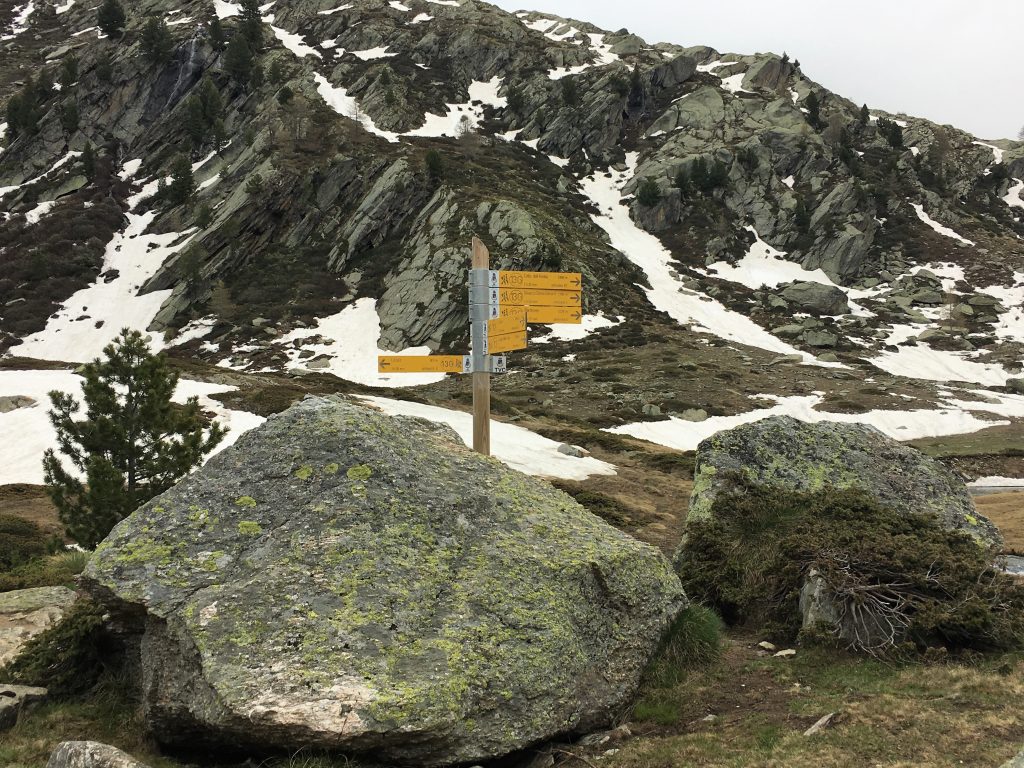 Signposting on the route 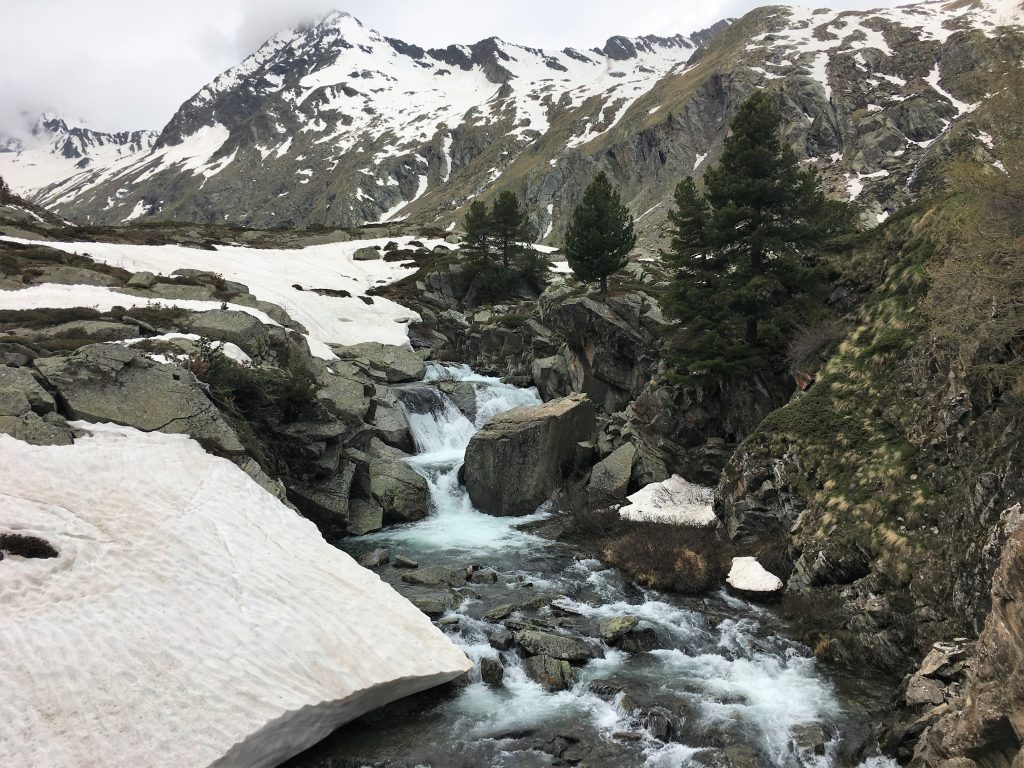