Lecce is a golden city, famed for it’s soft Lecce stone that has allowed master crafters to create ornate baroque masterpieces on all it’s glowing buildings. The stone is easily eroded and frequently replaced and restored, giving many buildings a patchwork feel with new crisp stone adjacent to worn rounded carvings. We spent a few hours here wandering around the streets, exploring alleys and dead ends, finding piazzas and palazzi. Terraced frontages hid complex buildings, the occasional open gate providing glimpses into courtyards and the buildings beyond. Dotted amongst the predominantly 17th century facades was the evidence of an older history, part of a Roman amphitheatre, Norman walls, Etruscan and Messapian tombs. Lecce is also surprisingly flat, we have become so used to towns that are on top of hills and their steep winding streets that it felt odd to be walking on the level. 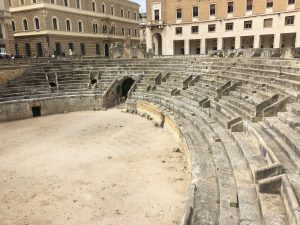 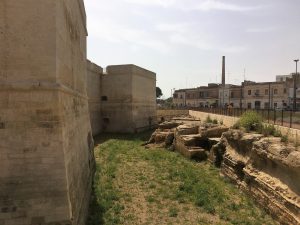 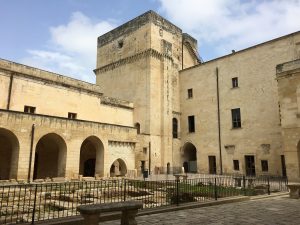 We parked in a small motorhome parking area, seemingly little known. It is on the other side of the road from the large parking area of Piazza Carmelo Bene and must be noisy at night, luckily we weren’t intending to stay. A few permanent vans were in situ, some looking like they haven’t been started for years. Residents looked at us quizzically as we parked up and inspected the grimy facilities. It was in working order but we trod gingerly around the suspicious brown lumps near the waste disposal area.

Our wanderings took us to the MUST museum where we watched some 3D films of the history of Lecce (ok, but too focussed on the ancient history) and looked at the art exhibits. I asked where the history section was, ‘closed for refurbishment’ was the answer – I wish they had told us before we paid our entry fee. Rather grumpily we moved onto the Basilica de Santa Croce, supposedly the most ornate of the buildings in Lecce it was covered in scaffold; at least they had a print of the church façade over the scaffold so we could see what we were missing. 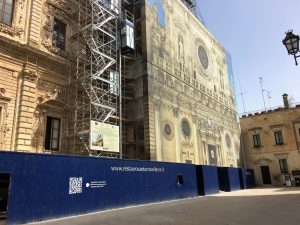 This is what you could have seen 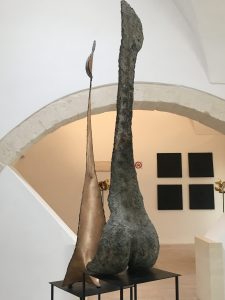 We did find one treasure though, the Museo Faggiano shows what happens when you start renovating a house in Lecce’s historic centre. Signore Faggiano bought the building so that his family could open a Trattoria on the ground floor and live in the upper floors. Building work to track down issues with the drains led to archaeological finds covering 2500 years.  From basement to terrace they uncovered little gems of historical interest, symbols of the Knights Templar, rooms used to prepare bodies for burial, ancient grain stores…We were handed several pages of notes and left to wander around this fascinating building. We may have started our visit to Lecce with a note of frustration, but we ended it satisfied. I can see why people rave about it.

While we were eating our lunch in the sunshine we decided that we would see if we could find a campsite to spend the next few days. That night we drove to a free parking spot on the coast near San Cataldo where we spent a little while googling the best place to stay.