Our parking spot to the south of San Cataldo had been noisier than we expected. We thought we had chosen a good place as far from the town as possible and nestled against the edge of the nature reserve, but we were close to a bend on the road and the Italian habit of beeping their horn in advance of driving round a corner woke us up early. It’s not something we seem to do in the UK any more, although I have childhood memories of Dad giving a warning beep as we drove down country lanes with high hedgerows. Here in Italy a driver will beep as they round a corner, beep as they go to overtake you, beep as they approach a bicycle (which always makes me jump) or a pedestrian, beep when they see a friend…the car horn is sometimes used in anger, but most often is just saying ‘hey, I’m here’.

We had managed to identify a good campsite for the next few days, but we needed to while away a few hours before we turned up. We drove back into San Cataldo town, parked up and had a bit of a wander to find some lunch. We also found recycling bins for the first time in ages so managed to get rid of two trugs full of recycling.

Our bike ride took us south along a cycle track that ran behind lagoons. Many of the other trails through the woods were closed and the ones that were open were flooded so we weren’t able to get to the coast here. Locusts were making ungainly flights between trees, occasionally hitting us with some force before clumsily flying off. We saw white winged birds that became almost invisible when they landed. We later found out that these are Squacco Herons, their bodies are a streaked brown and well camouflaged when their wings are folded away. Plenty of other small birds and sea birds were flitting around, we tried to find somewhere comfortable to sit and watch them but there were no convenient spots. We did manage to find a group of ducklings hiding in some reeds while we were looking for somewhere to sit.

South of the nature reserve we were able to cycle alongside the coast, sometimes on the road and sometimes over the top of the low rocky cliffs. The sea was a vibrant blue, the coast was eroded into small arches, caves and holes. We stopped for the obligatory dip/paddle before turning around and heading back the way we had come. 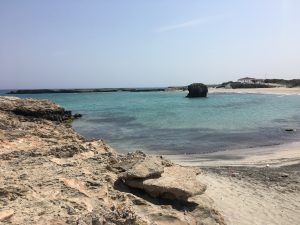 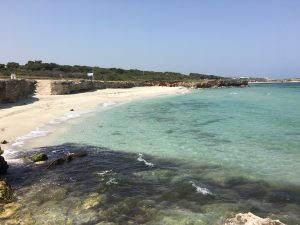 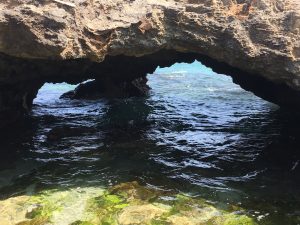 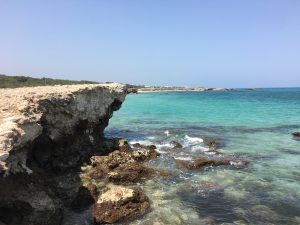 Finally we felt that it was long enough after lunch to check into the campsite, so we headed off to Sant Andrea where we would be staying for a few days.