Sometimes writing a blog that’s a couple of weeks in the past is a bit of a slog. Take today for instance, we have had a big detour due to a closed road, Paul is suffering from a painful muscle strain and we reversed into railings, breaking the trim around our rear light cluster. We’re not in the best of moods, and yet I need to write about a few lovely sunny, relaxing and active days. The upside is that writing about the good times should hopefully drag both of us back into a more positive frame of mind. Unfortunately it wont do anything for Paul’s painful thigh.

We had chosen a campsite/sosta at Sant’ Andrea to spend a few days relaxing in the hot weather. We wanted the freedom to sit outside the van with our chairs out and our feet up, which is something you can rarely do if you are parking in a carpark of municipal sosta. Many of Italy’s privately owned sostas are more like campsites, with all the facilities you would expect, electricity, showers, toilets, washing up and laundry. Camping I Faraglioni (the Sea Stacks) was no exception, the pitches were fresh and grassy, benefiting from being early in the season, and although there were a few vans in situ it wasn’t too crowded. It looks like it is in the garden of the adjacent hotel – the owners probably having decided there is money in motorhomes all year long. 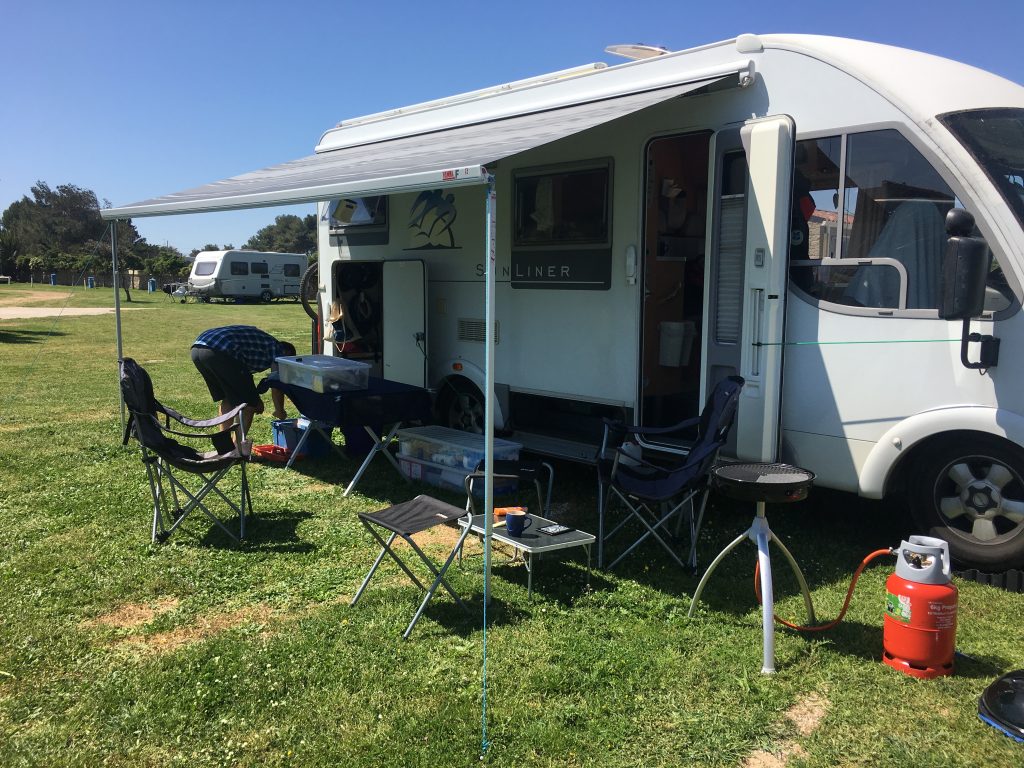 Letting it all hang out at Camping I Faraglioni

Not only was the campsite very nice, but it was right by the coast in a beautiful area. We didn’t quite have a sea view (unless we walked up to the wall and peered over the top of it) – there was a carpark between us and the sea. In fact we could have stayed for free in the carpark, but I’m so glad we decided to spend a bit of money. The coast here is made up of soft stone that is eroded into all sorts of sea stacks and caves, in some places there are small man-made safe havens cut into the rock where a boat could take shelter. There is an ‘undercliff’ which is barely a meter above the sea where we saw many people fishing or readying themselves for an octopus hunting snorkel. A couple of kilometers to the north is a long sandy beach, perfect for bathing and an easy enough walk from the campsite (google will show you just how busy this gets in the summer season, I don’t think we would enjoy it!). To the south are rocky coves that start shallow but swiftly leave you swimming in cold deep water. 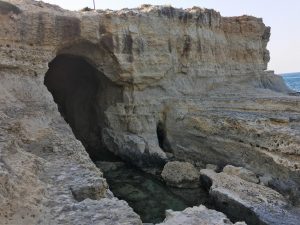 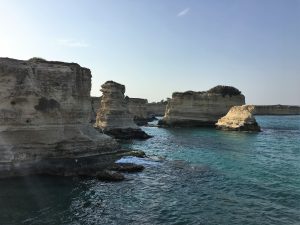 Sea stacks from the cliffs

looking south from the cliffs 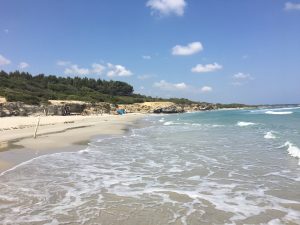 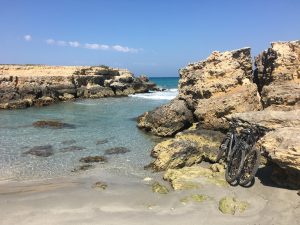 We spent four nights here, we walked along the coast to the north, cycled along the coast to the south and even got our big yellow banana (i.e. the kayak) off the roof and into the sea. This was an interesting exercise as the beach next to the campsite was knee deep in ribbony algae. Luckily it was only a few meters to the sea, but not a pleasant walk in or back again. Well worth it though for the amazing views of the coast. The sea was so clear it was almost as good as snorkelling, we saw fish swimming between the rocks and a couple of times small glinting fish flew over the surface of the water when we disturbed them. We were able to navigate the kayak in and out of caves and under arches, waving up at the people who were taking pictures from the top of the cliffs. 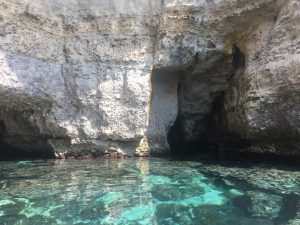 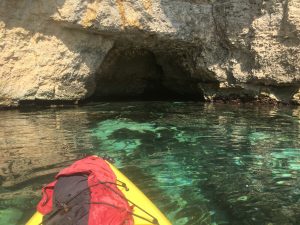 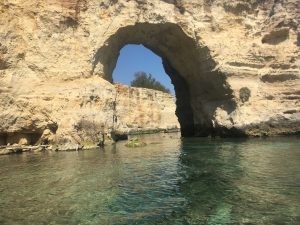 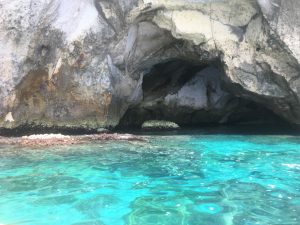 Paul also used his time at the campsite to come to terms with the Cadac, we’ve been carrying this gas barbeque around for the past year, but it hasn’t seen much use. Paul had found our version (Grillogas) quite tricky to use because it doesn’t have a good gauge on the gas supply. As a result you can accidently turn it off rather than just turning it down, and as it doesn’t have automatic ignition relighting it can be tricky, you have to take all the food off the BBQ. Paul drilled a hole large enough to insert an igniter from underneath and added a couple of indicators on the dial with permanent marker. Problem solved!

It was a very relaxing few days and we found it really difficult to make the decision to move on. And what do you know? we’re both feeling more cheerful having bought our memories back to life – a glass of wine has been helpful too.