We left our lovely campsite to head a very short distance to Otranto, We had one of those starts where we just couldn’t settle. There is a lot of parking in Otranto, but we couldn’t find a spot that we felt happy with. After visiting several of them we parked along the side of the road while we went for a look around. That evening we finally decided on a car park. It said we had to pay, but all the parking machines were turned off so we figured we would be ok overnight.

The morning was spent wandering around this touristy town. We were parked near the harbour so we walked along looking at the boats and the fish swimming lazily in the sea. Our entry into the centro storico was via a gate in the medieval fortress, we walked through the busy streets roughly in the direction of the cathedral, there were lots of tourist shops but there wasn’t any hard sell. 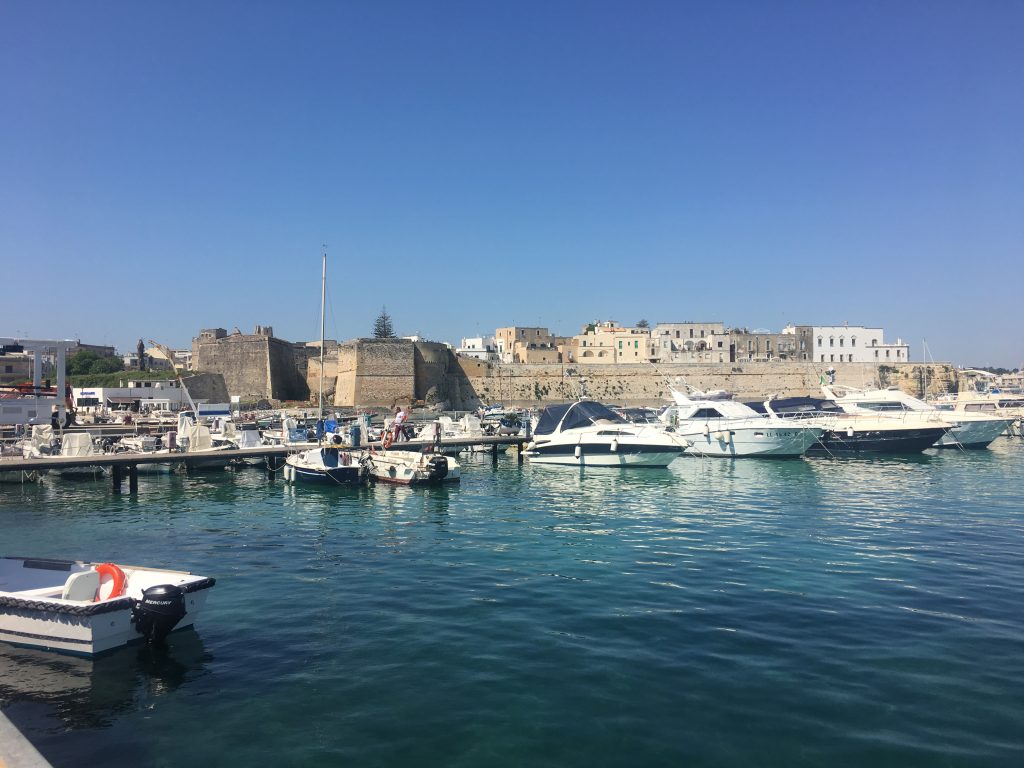 Looking across the harbour at the medieval fortress walls 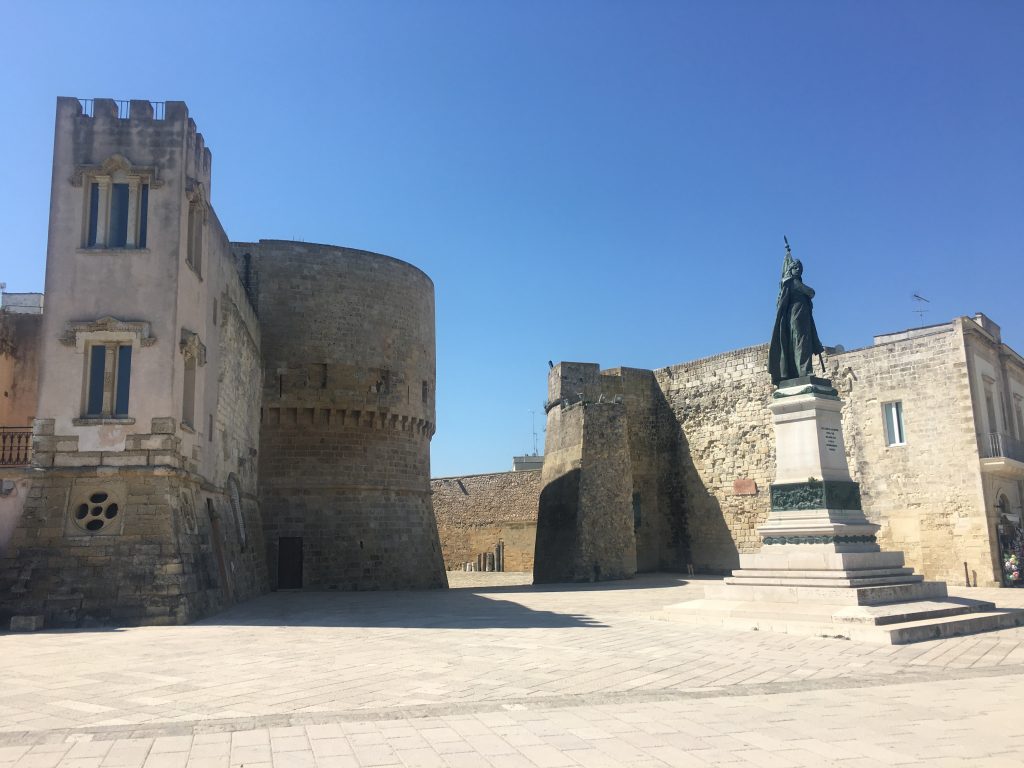 The monument to the Otranto Martyrs

The cathedral is the main event in Otranto, we wandered into the cool calm crypt first with it’s many marble pillars and frescos. We had obviously done this the wrong way round as we weren’t allowed to ascend the stairs to the cathedral and had to walk around the outside to get in. Once in the cathedral proper we could see the  12th century mosaic spread across the floor of the nave and adjacent areas. It is crude when compared to Roman mosaics, but it’s depictions of beasts, demons and angels were compelling; we spent some time trying to decipher the Latin and make sense of what we were seeing. Above the mosaic is a fabulously ornate gilded coffered ceiling added in the 17th century. 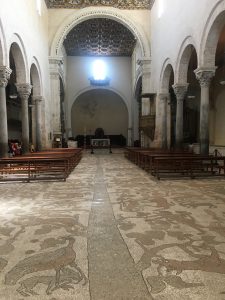 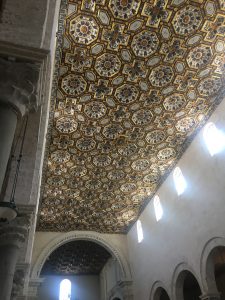 Also in the cathedral are the relics of the Martyrs of Otranto, killed in 1480 by Turkish invaders. The town of Otranto had put up considerable resistance to the invading Ottoman army, when the Ottomans finally gained the town they killed or enslaved the majority of the population. A group of able bodied men were told to convert to Islam or die. They chose death and were executed. The following year the Ottomans were ousted and the relics of the martyrs were exhumed. Now you can see many of their bones in glass fronted cabinets on the walls of the chapel although some of the relics have been shared amongst other churches in the Salento region and even further afield. This was one of our favourite religious buildings, maybe we’re a bit ghoulish! 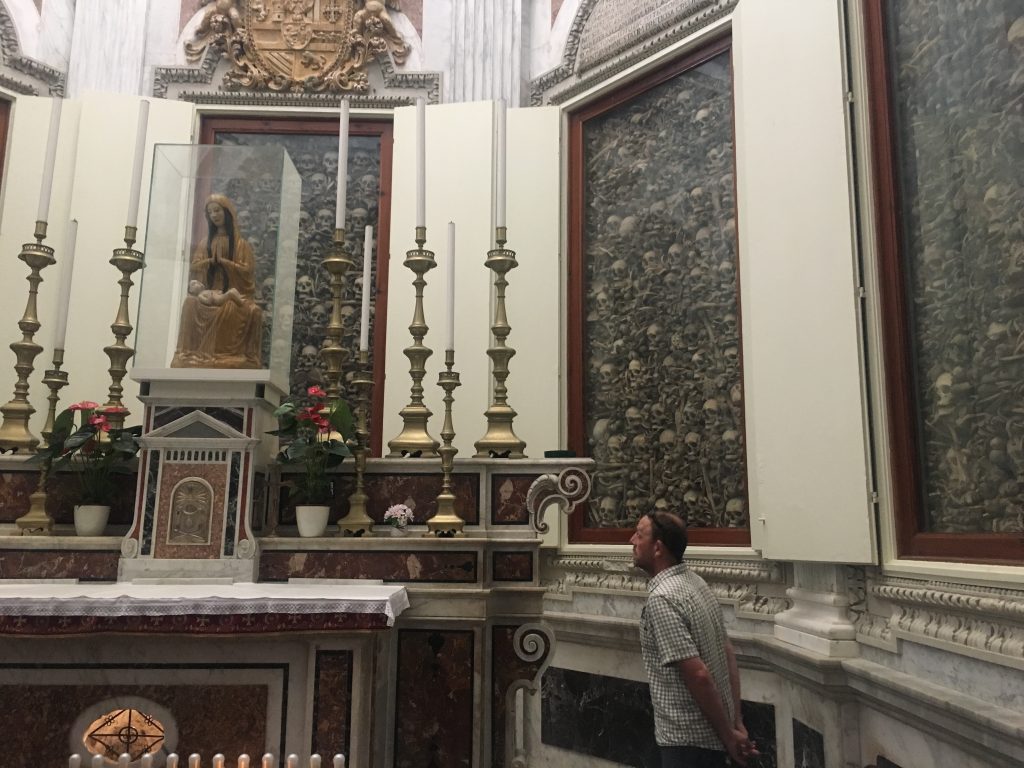 Our wander around Otranto had only taken the morning so we popped back to Bertie for a spot of lunch and then decided to do some walking along the coast south of the town. We were aiming for Punta Palascia, but it was a hot day so we didn’t make it that far. We had passed a nice looking beach at Cala Casotto, so we decided to turn round there after a swim. It was a bit of a scramble down the cliffs to the beach, but it was worth it to cool down in the clear water. 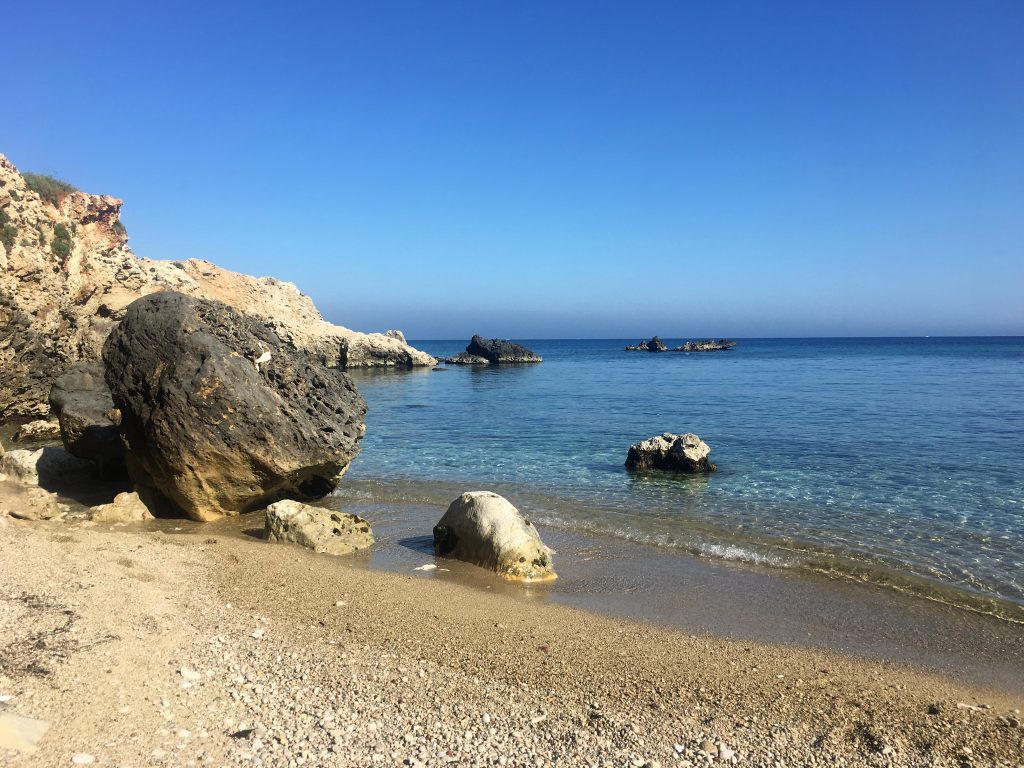 Our little beach spot – perfect for a dip

This was one of our favourite coastal walks. For most of the walk the cliffs were quite high and rocky with deep water offshore. Lots of fishermen had found their favourite spots and settled in for the day. Sea birds wheeled around off shore, including mediterranean gulls with their distinctive red beaks and feet. We spotted hen harriers – mostly brown with a white strip across the base of their tail – being mobbed by swallows and other small birds. On the heathland were crested larks singing loudly from the ground, possibly distracting us from their nests. There were many spring flowers dotting the grass. The whole area was full of life.

The interest wasn’t limited to natural wonders, on the headland near the Torre Dell’Orte there were many underground buildings and bunkers built into the rocks which we explored as much as we dared (our fear mostly being of finding human waste – our motto being ‘if you see tissues turn around’). A ruined lighthouse stood sentinel on the hill, it’s rear half collapsed. 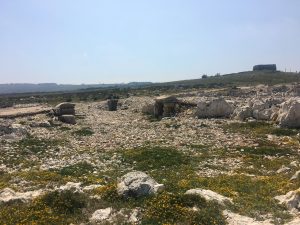 Strange bunkers on the promentory 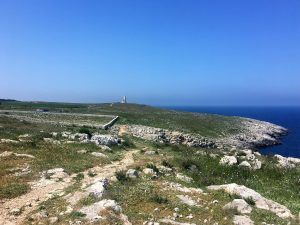 Ruined tower in the distance

It had been a very full day, Otranto was somewhere we could have stayed for longer. If only we could make up our mind where to park!