It was time to leave Italy. We had spent the night at the sosta in La Thuile where heavy showers stopped us from getting out and exploring the area. The sosta manager turned up late in the evening to find out whether we were planning an early escape, but left us in peace when we said we were leaving at about 10. The following morning we had to ring him to come and let us out. He charged us a random price of €12 which he seemed to make up on the spot – but as it was cheaper than both of the quoted prices at the entrance (€15 in low season and €25 for the ski season) we weren’t complaining, we’d had electricity and used the services.

Our reason for being in La Thuile was based on avoidance of the Mont Blanc Tunnel – it’s an expensive option – instead we were going to drive across the Piccolo San Bernardo (or Petit Sant Bernard once you get to the French side) pass. The pass had only been open for a week, it’s usually open in May but the amount of late season snow in the alps had kept it closed a few weeks longer.

We had already completed a lot of the ascent, driving up to La Thuile on good roads (ski buses come up here – although that doesn’t necessarily mean a thing) up multiple hairpins which were helpfully numbered on the road signs. As we set out from La Thuile we wondered what the rest of the road would be like. In the winter the roads are not cleared and the whole area is part of the La Thuile/La Rosiere ski resort so there isn’t the incentive to maintain them. However the Italian side continued to be a pleasure to drive, wide, flat and with barriers pretty much all the way. The same could not be said for the French side which was rougher, narrower and had very few barriers, the Tour de France is coming here this year and I wonder if the French will do anything to prepare the surface.

There were a few vehicles driving across the pass, as usual they were mostly leisure vehicles; motorhomes, motorbikes and pushbikes enjoying the views. The cyclists who were descending towards us looked very cold, wrapped up with scarves around their faces and heavy gloves, they might be on the easiest part of the ride, but wouldn’t have the effort of the ascent to keep them warm. 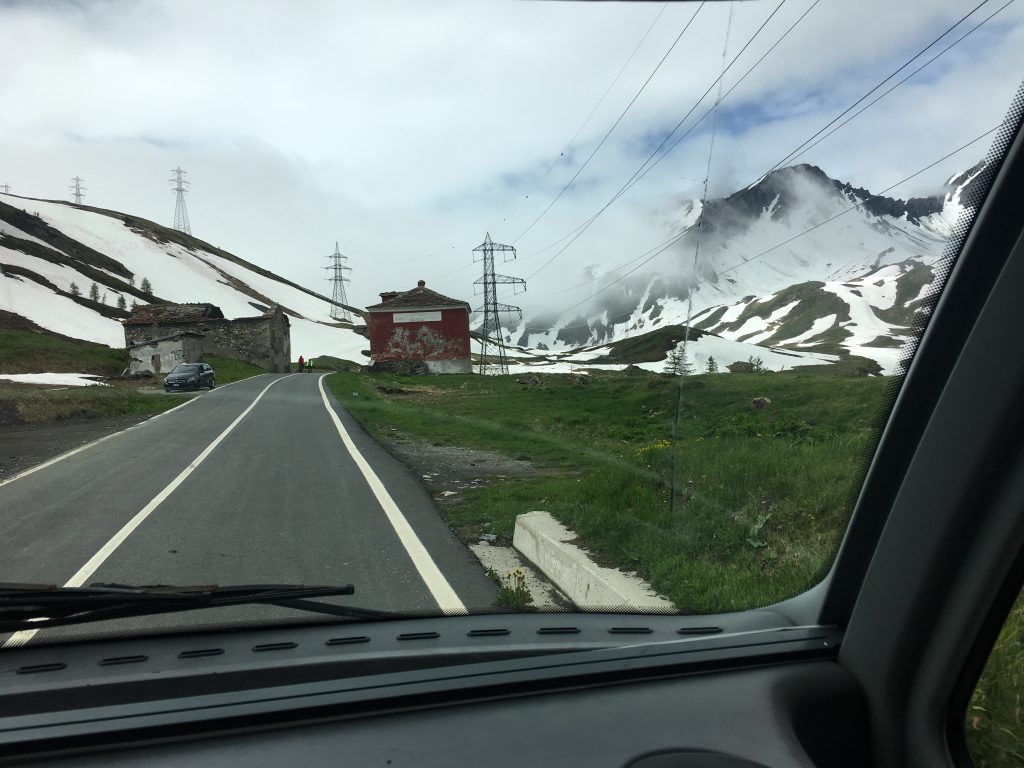 At the top of the pass the snow was thick, forming banks at the side of the road, at one point a bank of snow had slumped onto the road, but was easily avoided. A gift shop sold Saint Bernard soft toys and the café was open. A couple of statues and a small chapel to Saint Bernard could be seen above the snow, but the Iron Age stone circle, which is bisected by the road, was still covered in snow. The parking areas were also snow bound but there was enough room for a few vehicles to park and their occupants to get out for a leg stretch. The top of the pass is at the heady height of 2188m, it is lower than the pass to Livigno which we crossed during the ski season, which goes to show how much work it must be to keep the Foscagno pass open all winter. 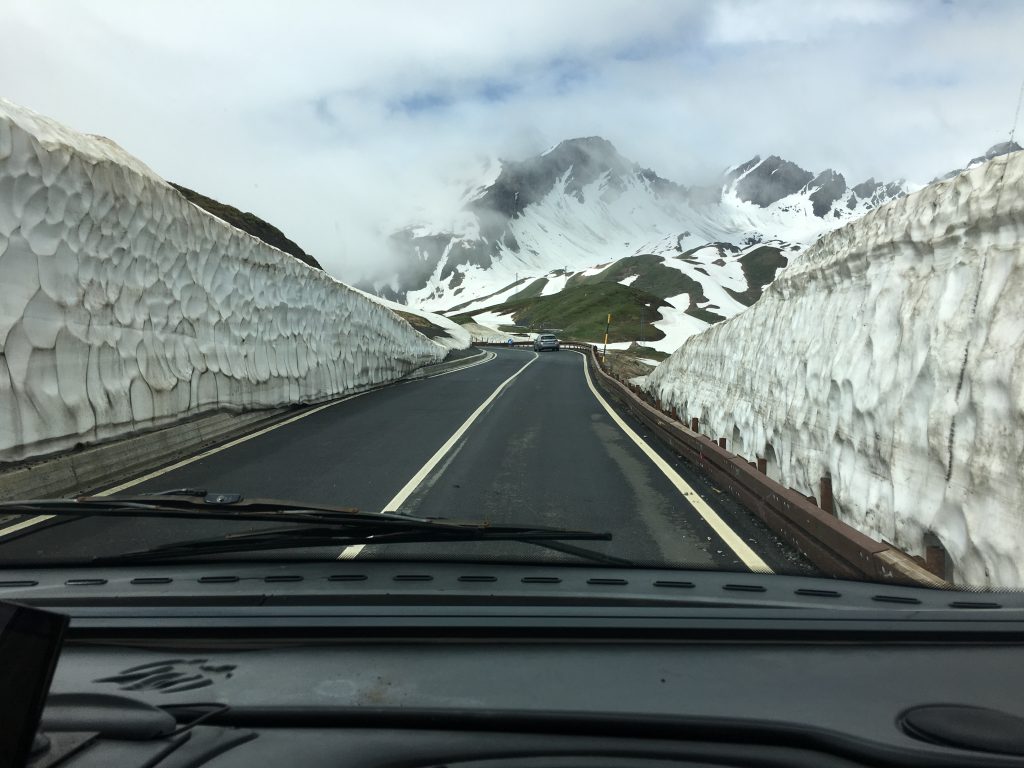 Snow banks near the top of the pass

We said our sad farewell to Italy and descended into France, through the ski resort of La Rosiere and down to the busy little town of Bourg-Saint-Maurice. Along the way we watched cows being milked on the side of the mountain; the mobile milking parlours, taking two cows at a time, were ingenious and I wish I had managed to get a decent picture. We parked up by the funicular railway station, which was undergoing maintenance, and popped into town for some proper French bread and patisserie. After the Italian chewy bready the French stuff seemed light as a feather, although our first loaf was disappointingly doughy and we had to go back out and buy a better one. 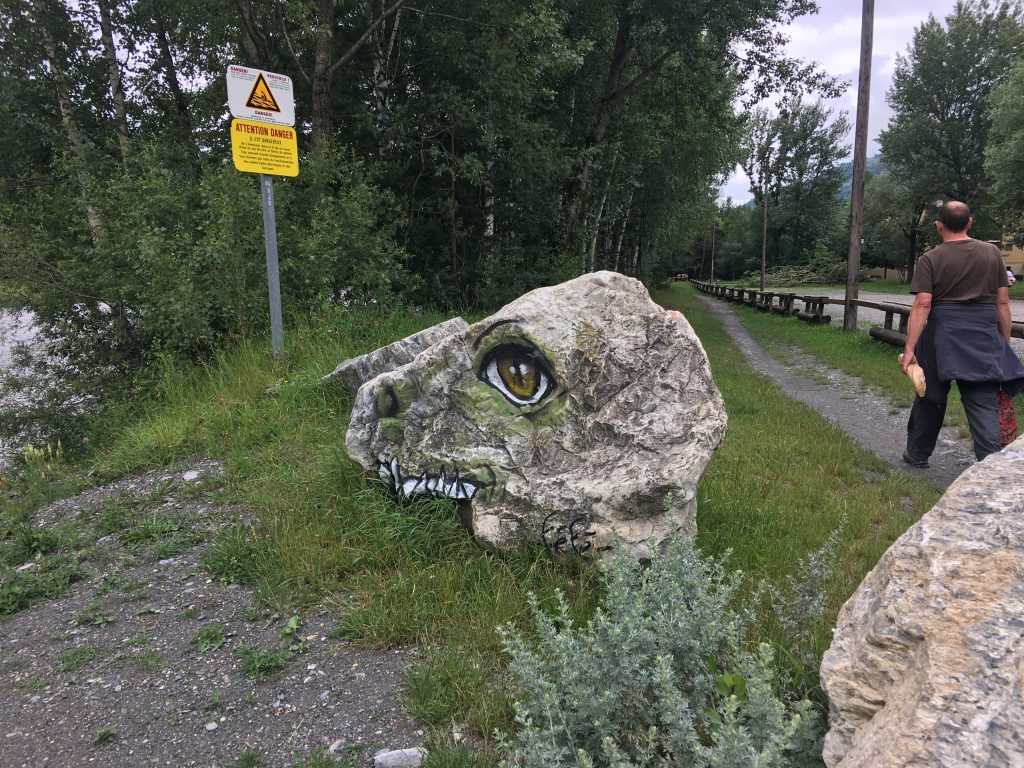 Random Photo. A dinosaur in Bourg-Saint-Maurice

We had considered stopping here for the night but when we mapped out our journey back we decided to push on and get a few more miles under our belts. Lake Annecy would be our next stop.