It might seem like we’re doing the Hokey-Cokey with our regular alternation between coast and inland. It was time to put our left leg in and move inland again. Our destination this time was the Sila mountains. The landscape here is a densely forested high plateau with several lake reservoirs. We were attracted by the well marked and maintained forest trails, unusually for Italy we could find the routes online which gave us lots of opportunity to prepare.

La Sila has several ski areas as well as walking, mountain biking and plenty of interesting flora and fauna. While we were there the ski resorts were in their last throes, but events were being held for Easter and snow conditions still looked ok for a bit of morning skiing in Lorica. Other resorts had lots of brown patches. We weren’t here for the skiing though, tempting as it was. We were here for the walking and biking.

Our first night was spent on the shores of Lago Ampolino, parked on a small spit of land that extends into the lake. The motorhome service point, owned by the nearby café, was shut when we arrived; winter covers were over the water supply and the waste disposal, but the owners must have spotted us and it was uncovered by the following morning. 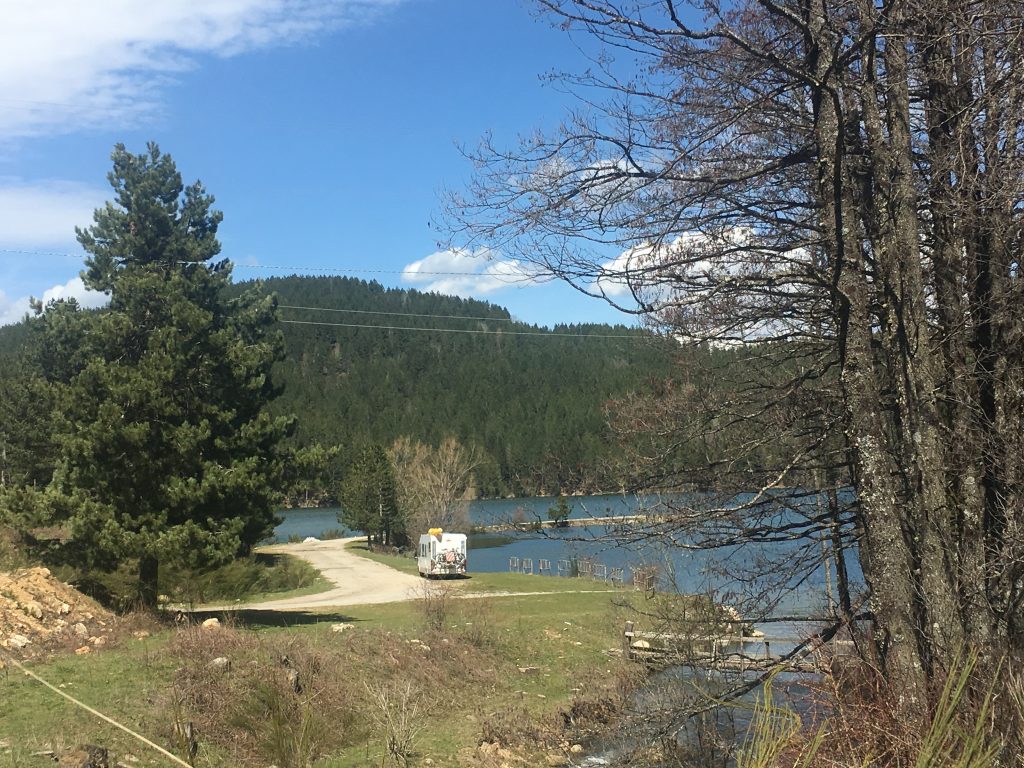 Parking spot by the lake

Our drive up had been slow and winding but nothing too adventurous, the highlight being just a few meters away from our parking spot when a black squirrel darted across the road in front of us. We saw several other black squirrels while we were in the area, but this was the only one we managed to capture a grainy photo of. The black squirrels here are assumed to be a genetic variant of the red squirrel, although a bit of web trawling reveals an opinion that they are a separate species. 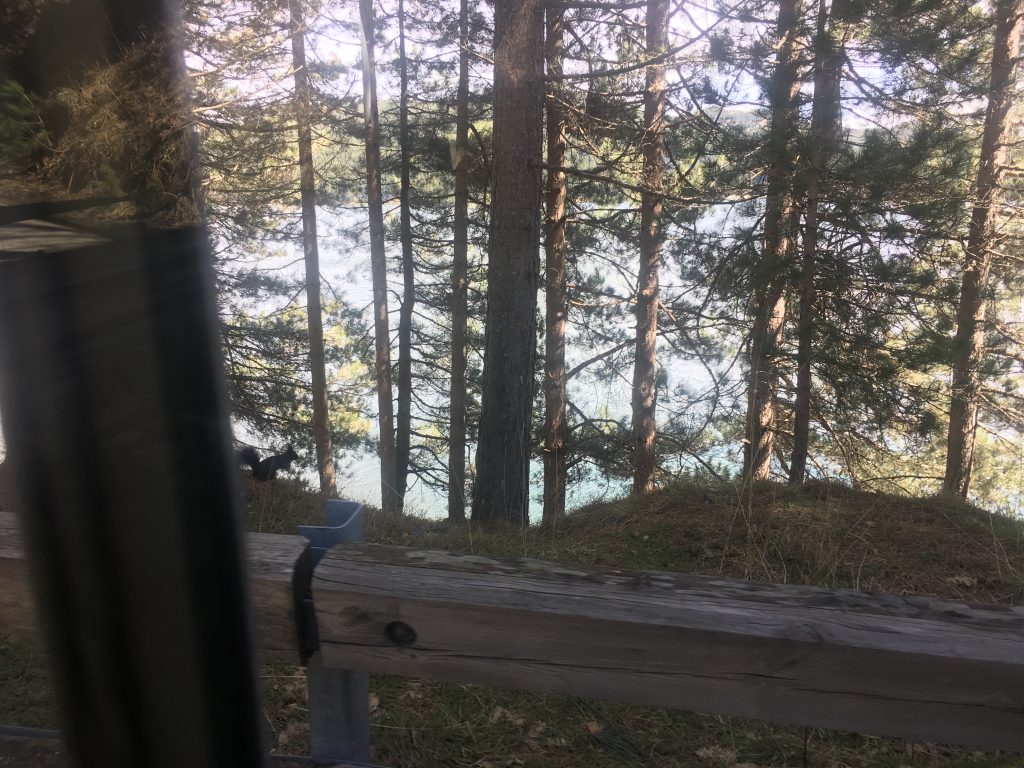 The weather was good when we arrived at the lakeside so we spent the afternoon lazily pottering around, strolling around the village and very low key ski resort (just a hotel and a lift really), watching the wildlife and getting excited (Paul) about a sea plane that skimmed back and forth over the lake a few times. That evening it was pleasant enough to sit outside and watch bats skim over the lake hunting insects. In Italy we have spent a lot of time in car parks with lighting, so it was nice to get a bit of darkness and see the stars for a change.

The following morning we got on our mountain bikes and headed west along the main road, the SS179. Only a couple of cars passed us, the area seemed very quiet considering that it was the Easter weekend. We took a right hand turn off the road towards the village of Zimmaro and followed random tracks northwards through the forest to try to connect up with the SP216. As we ascended over the small ridge between the two valley roads we encountered more snow between the trees, but also signs of spring starting to emerge. Crocuses were blooming and small bluebell like flowers dotted the verges. When we finally reached the other road we headed east between farmsteads where sheep and cattle grazed. We followed the opposite shore of the lake whose banks were high and tributaries swollen with snow melt. Eventually we had made a full circuit of the lake and arrived back at Bertie. 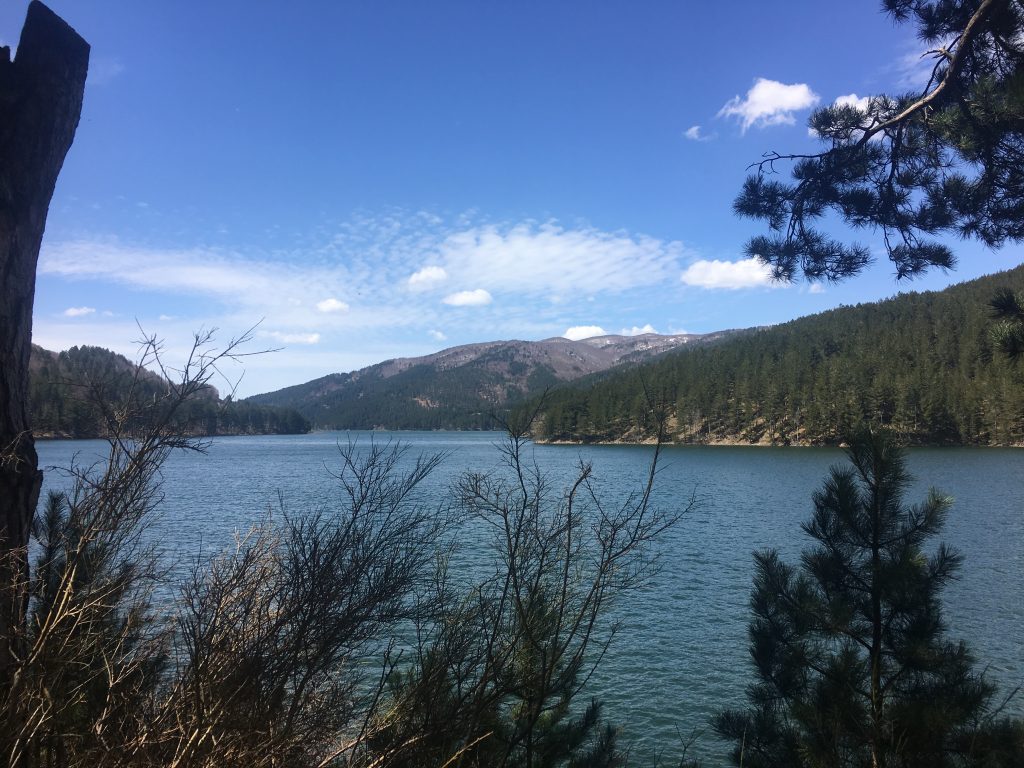 View of the lake

That evening we decided to move northwards into the heart of the mountains. There was a forecast for snow so we fancied a campsite where we could use our electric heater. Camping Lago Arvo is just outside Lorica and was €8 per person per night in winter. This huge campsite has a lot of very attractive grass pitches by the lake, but we wanted to avoid getting bogged down so stayed near the entrance where the pitches were firmer.