Our next stop was Le Castella, known – strangely enough – for it’s castle that sits on a spur of land connected to the mainland by a narrow land bridge. We turned up hoping to find a large flat parking area near the marina. The parking was there but closed with gates and barriers. We weren’t the only ones to turn up and be bemused by the lack of parking – a couple of French vans towing car and motorbikes also turned up. The French vans moved on, but we decided to stay at least for the day time; there was a walk we wanted to do along the coast.

We ended up parking on the slope leading down to the marina, avoiding driving around the small tow to look for an alternative. Then we struck out on foot, heading north towards a small stretch of nature reserve, taking the road out of the town and then a track that ran down the side of the (closed) campsite. From there we just followed the coast as far as we could. This nature reserve is mostly a marine reserve and includes a protected area for Loggerhead Turtles who nest sporadically in Italy. Not that we would see them on the beach as they lay their eggs in July and hatch in September. 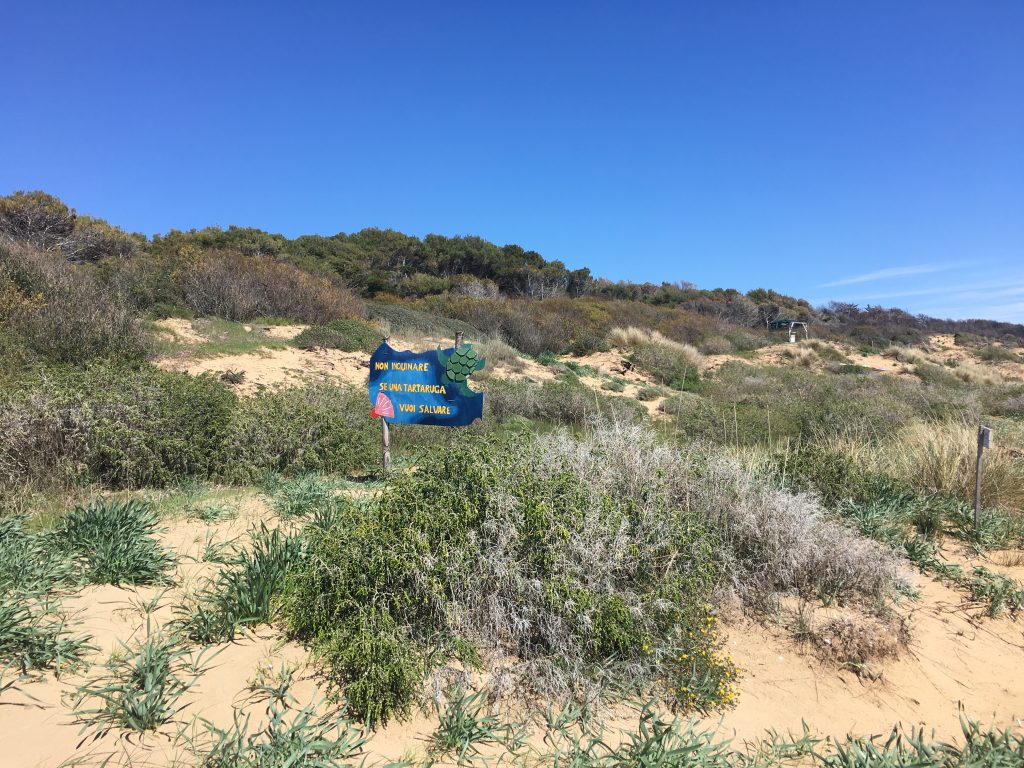 We enjoyed our wander along the coast, trying to walk on the firm sand nearer the water and at the same time avoid getting wet feet. One stream provided an entertaining opportunity to play chicken with the sea as we attempted to cross via a sandbar while the waves were ebbing. Occasional rocky outcrops provided some respite from the sandy shores, including one mushroom shaped rock that we used as our lunch spot. It was easy enough to climb up, but what goes up does not always come down. And this time that included me; dropping down from the rock would have required stronger triceps than I have, so Paul had to go and find a driftwood tree truck I could use as a ladder to aid my descent. 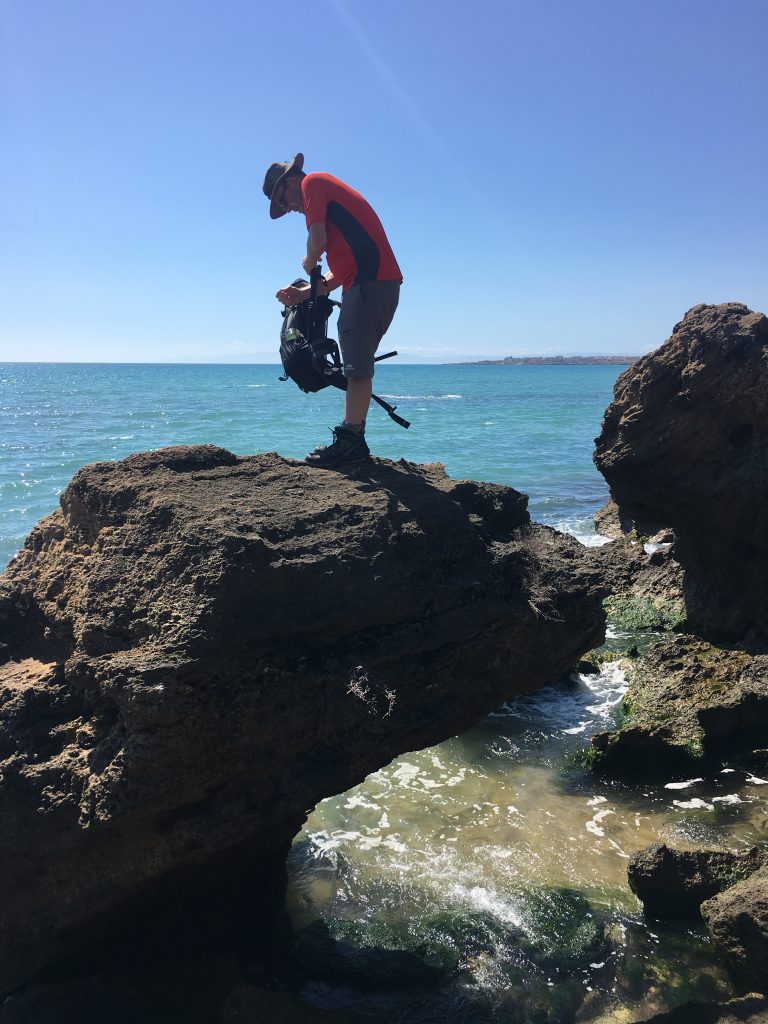 Our lunchtime spot – good views but a tricky descent

After Paul had come to my rescue, we continued along the beach until we found ourselves at a river we couldn’t ford. The current was strong and the river deep enough to put us off wading through it. We turned round here and retraced our steps back to Le Castella. 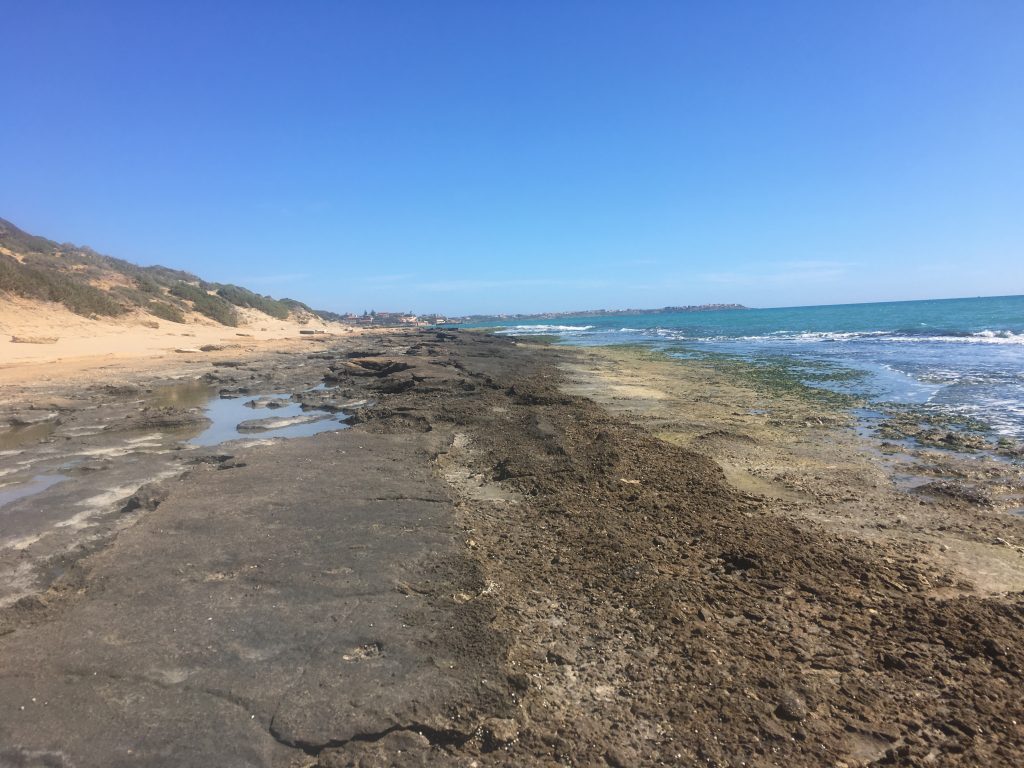 Views along the beach 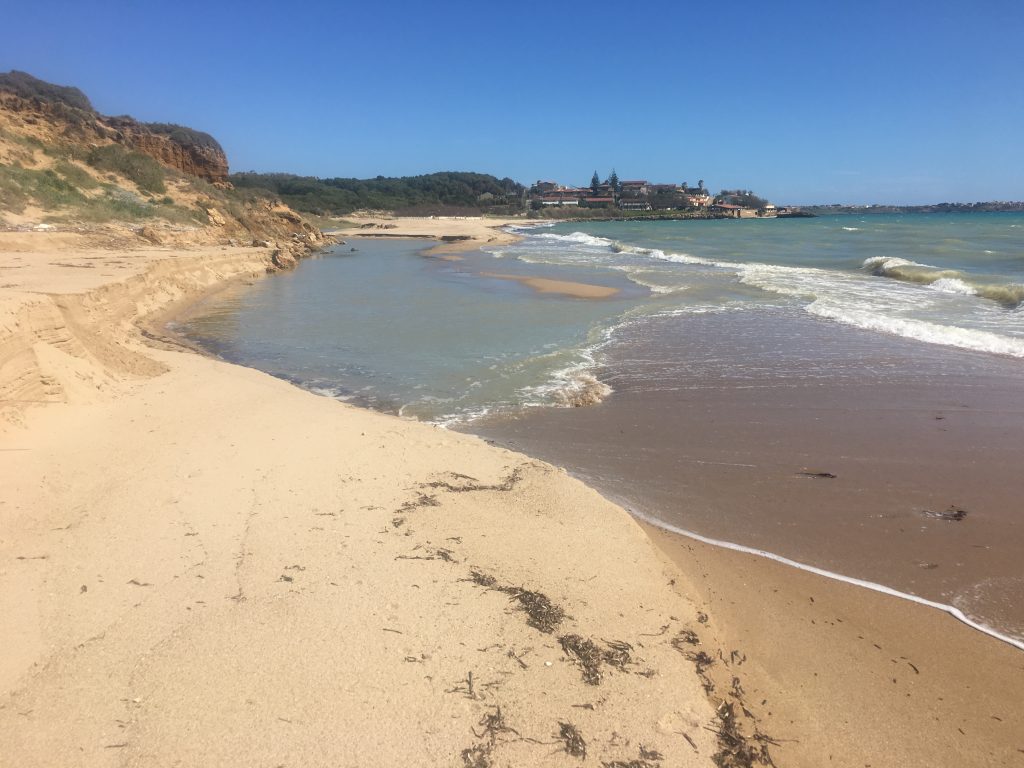 The river that ended our walk

Before we returned to Bertie we walked through the town to see the main attraction. The castle here is a fortress from the 16th century, but built on older foundations dating back as far as the Magna Graecia period. There were also some remains of the town walls near our original car park. The castle was shut while we were there, but it looks impressive standing apart from the town on it’s island surrounded by the sea. 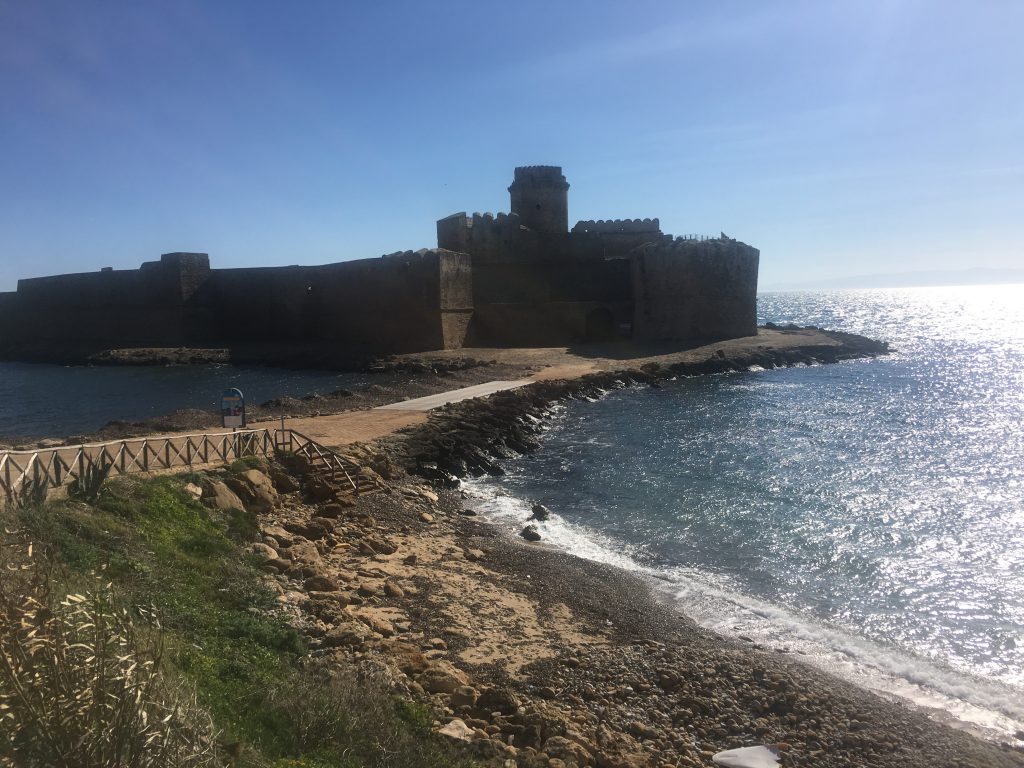 The fortress at Le Castella

When we got back to Bertie we decided that our parking spot was far to sloping to stay for the night. There was nothing to keep us here for a second day so we drove further up the coast looking for somewhere to park. It was one of those frustrating searches. We had a few possible spots marked up near Crotone, but some of them looked decidedly dodgy and some were just closed. In the end we opted for a bit of rough ground opposite a pizzeria on the outskirts of Crotone. Not the quietest spot, but at least it was flat.