The name of this post refers to the coast path that we walked on this day – Apprezzami l’Asino. The apocryphal story being that the path is so narrow, if two people were walking their donkeys in opposite directions it would be impossible to get past each other. So they would appraise the value of the donkeys and any goods they were carrying and then the lowest value one would be pushed off the path. With compensation to be paid by the owner of the surviving donkey. I can’t imagine this really happening, can you? But it makes for a good story and advance warning about the narrow path.

More about that later. The day started with us waking up at the Lago Sirino sosta to reasonable weather. It had been pretty gloomy when we arrived so it was nice to see some sunshine amongst the swirling clouds. This sosta may be the nicest one we have stayed at in Italy. A well constructed set of half a dozen terraced pitches with electrical supply and water points between every couple of spots. Electricity had a cost of €2 for six hours but otherwise the sosta was free and the facilities clean and all in working order. There was a view over the valley (when we could see it), and from our side window we could see the lake. The road to get here had been a little deformed but it wasn’t busy so we could take it easy. We had a quick stroll around the lake before we left, the hamlet looked affluent and well maintained. I can imagine it being a popular spot for a weekend day trip when the weather warms up but today everything was quiet. 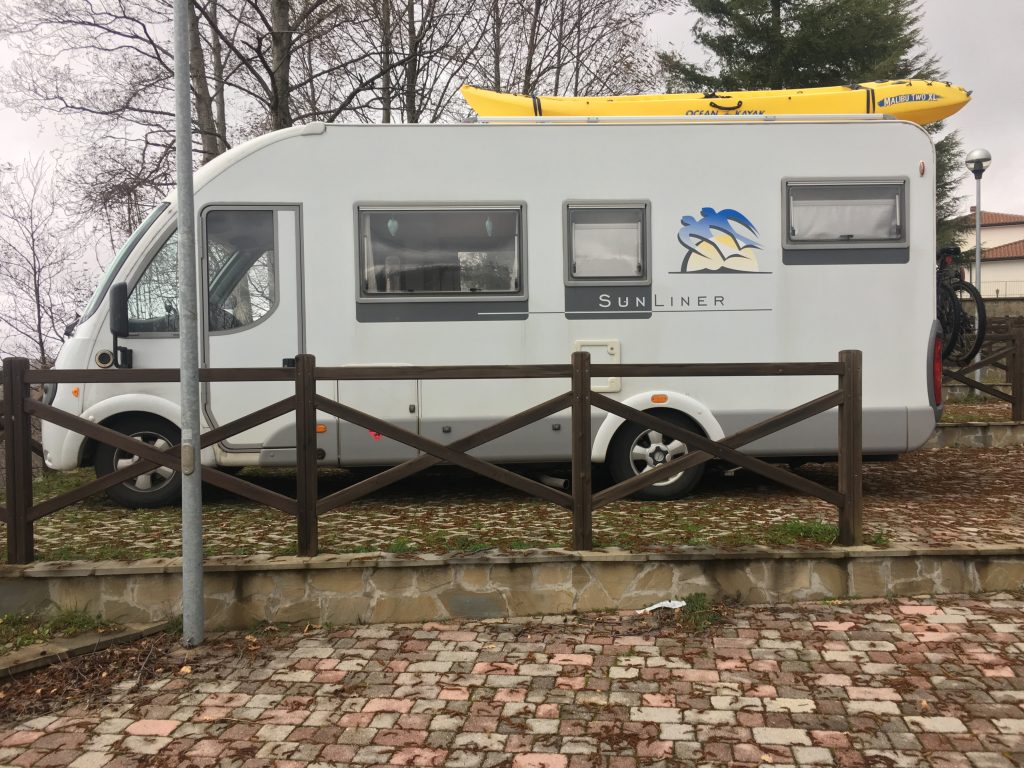 Settled into the Lago Sirino Sosta 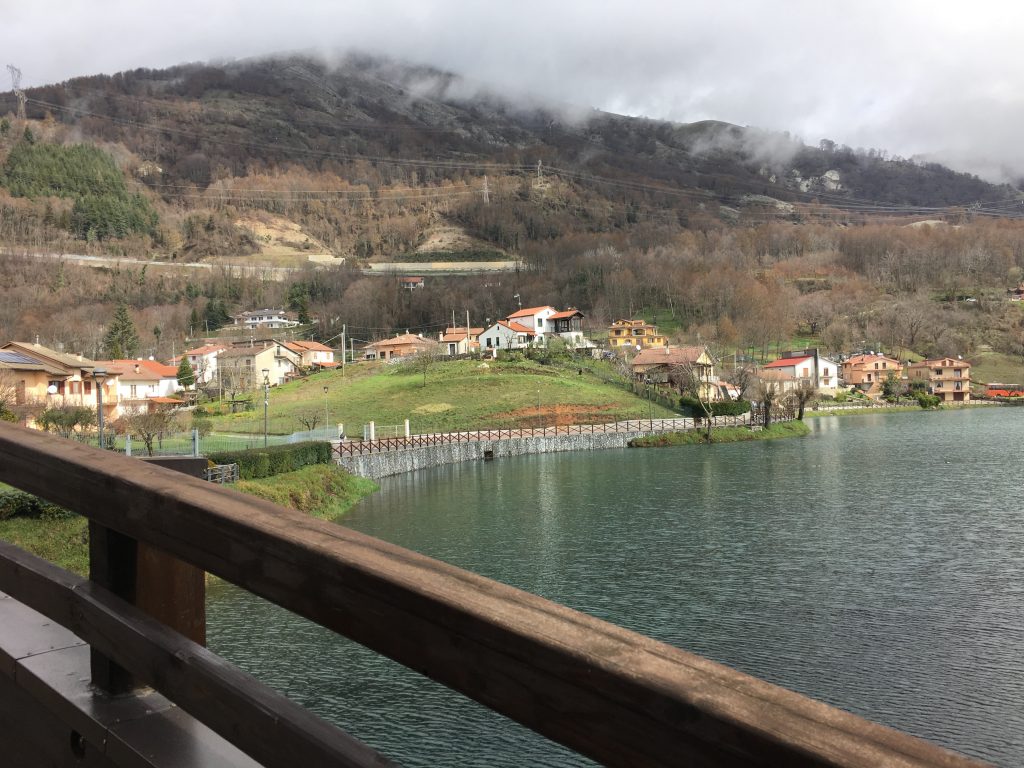 Lago Sirino from the path that circles the lake

After our brief perambulation we set off towards the coast. We were heading for Sapri, a coastal town behind a wide bay on this most southerly part of the Campania coast. We had a couple of parking spots we had eyed up on google. Initially we parked up along the seafront, where the parking was free in low season, but the waves were crashing over the sea wall and the traffic was quite noisy so we moved for the night to park by the football pitch.

We set off to walk the donkey path which started from the harbour. There was no parking here so we had to walk along the seafront and then up the road for a bit until we could get onto the path. We later found that there was parking a couple of km along the path which could be accessed from the SS18.

The initial section of the pathway was well constructed, wide and pretty level. There were informative signs at various spots along the path and bins and cycle racks. It was obviously a popular place for a stroll, and when we were on our way back the small carpark was full of cars, but during the day we had it to ourselves. On the map the path looks very close to the road, however the slope is steep enough that you don’t feel it intrudes very often, just the unfortunate rubbish strewn under the laybys where people on the road above had ditched their food and drink containers.

We walked along this easy section of path enjoying the sight of the waves crashing against the rocks and the dart and rustle of the many lizards that were basking in the sunshine. The views south showed headland after headland disappearing into the distance, the stony cliffs contrasting beautifully with the cerulean sea. It was possible to venture closer to the coast at points to watch the waves crashing against the spiny limestone rocks.

Sea views on the first stretch of the walk

After about 3km we reached a promontory with the ruins of a tower. From this point the path suddenly narrowed, it looked precarious where we could see it between the scrub and rocks, but it was worse from a distance than it was to walk. It is a maintained path and there were plenty of places where it had been shored up with stone walls to keep the earth in place and stop it slipping down the cliff face. At one point the path crosses the river that forms the boundary with the region of Basilicata, the river channel was completely dry, like so many rivers in limestone areas it probably only runs when there is significant rainfall. The views continued to delight, the coast becoming more craggy and indented as we progressed.

We didn’t manage to reach the end of the path (in fact I wasn’t sure where the path did end) because we had to turn around to get back before dusk. We agreed that this was our favourite coast path walk so far. This part of Italy was really ticking the boxes for us and we were looking forward to heading further south.

p.s. it was along this path that I found my one spear of wild asparagus