We had spent the night parked outside the archaeological site of Velia-Elea (Velia – the Roman name, Elea the earlier Greek name), another Magna Graecia settlement. A brief walk in the evening had led us to the notice board for the entry times. ‘It’s nine euros’ said Paul in disbelief, ‘we’re not going in if it’s that much’. I was sure that it had said it was just a couple of euros in the guide book so I was a little mystified, but we agreed that it was too much for what was reputedly a bit of an untidy and uninformative site. The following morning we went and took another look and realised that we’d been looking at the opening times, not the prices. Doh!

The entry was only €3 each so we decided we would go in and take a look around. In fact if we had known we could have bought a ticket for an additional euro at Paestum and got into both sites.

The site was overrun with the swift green growth of spring, but it gave it a certain charm. Drainage was an issue and in one place the path led into a foot deep pond; we skirted around the outside of the buildings until we could find another way through. It was a shame we couldn’t go all the way up to the more recent tower on the hill above the site, but it was closed off due to the danger of falling rocks. We meandered around the foundations of various buildings, but it was a little disappointing with the mosaics covered in tarp for their winter protection and the upper areas inaccessible.

My disappointment was assuaged by having one mystery cleared up. For two or three days we had been bemused by the sight of grown men wandering down lanes with sparse and limp bunches of grass in their hands. Wandering around the edges of the Velia-Elea site were a couple of older men who were also carrying small green bundles. Every now and again they would dive into the hedgerow with much excitement and come out with a slightly bigger bundle. When our path intersected ours they wished us a ‘buongiorno’ and I plucked up the courage to ask what they were holding in my best pidgin Italian. ‘Asparagi’ was the proud answer, and when I looked closely at the contents of their hands I could see it was indeed asparagus. As slender as a blade of meadow grass with a miniature version of the asparagus bud. Apparently it is usually a man’s job to forage for asparagus and it is pretty difficult to find. I can just imagine the false gratefulness of the housewives of Italy when they receive their tiny harvest of asparagus, but the very real gratitude that it got their husband out of the house for the day. 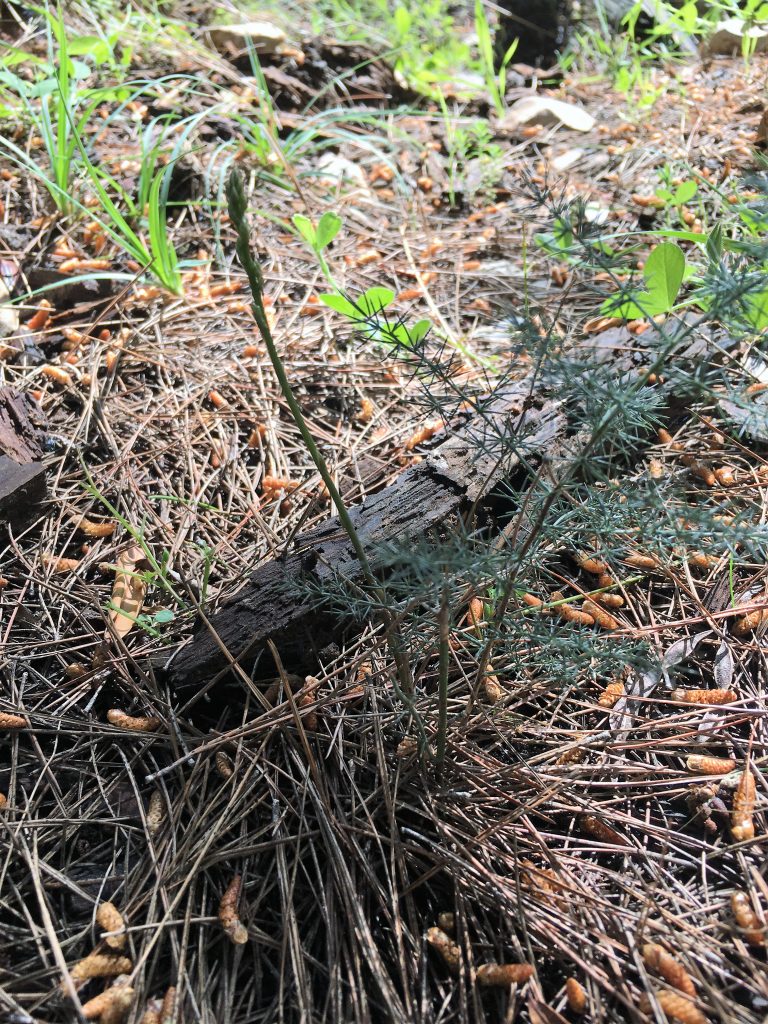 A solitary stalk of asparagus

It became my mission then to find some for myself. I didn’t manage to that day, but a couple of days later I found the blue green leaves of the plant (looking like asparagus fronds but very thistly) and one upright stem of asparagus. So far that is all I have found, the flavour was very strong and I can see that a small amount would provide enough flavour for an omelette or risotto, I just wish I could find enough to cook with it.

That afternoon we moved onto the Marina di Camerota. It is quite usual around this stretch of coast for there to be an inland town (in this case Camerota) and an associated marina or beach town. We were heading for the marina so that we could do another coastal walk.

On the way we dropped in to take a look at the abandoned medieval village of San Severino. This small settlement sits on a ridge above the more modern inhabited village. We had considered staying here but the parking spot by the village was just a patch of dirt on the inside of a hairpin bend and we couldn’t see any other good parking. We left Bertie taking up most of the parking spot, made a donation in the box at the bottom of the steps and then climbed up to take a look at the village; an atmospheric jumble of cottages in various states of disrepair. It is easy to see how the buildings were abandoned over time, with no possibility of building a road any closer to the houses. Now the local town maintains what is left as a tourist attraction with night time lighting and a small church and piazza for events.