When we got to Termoli we had decided to slow down and travel through Puglia, Basilicata and Calabria (roughly in that order) before heading north again. But following a conversation with my sister we changed plans slightly. She is planning to come out and visit us just after Easter, and the most convenient airport to fly into is Bari, Puglia. So rather than starting with Italy’s heel as planned, we swapped directions and decided to start with the toe. This meant another longish drive across Italy. The theme of the journey was fennel. As we crossed the country we found ourselves frequently behind large trucks with the frothy fronds of fennel poking out. It must have been the season for the fennel harvest.

We headed for Paestum, an archaeological site not far south of Salerno. First of all we had to find somewhere to spend the night so we stopped to the south of Paestum near the beach at the Baia di Trentova, an attractive beach (although with some pretty ugly beachside concrete) where we mooched around for a little while enjoying a break in the weather. We were chased back into Bertie by a small dog that wanted to bite Paul’s ankles, I can only imagine he had the scent of something particularly interesting on his socks because the dog had no interest in me (or maybe the smell of my feet put it off).

The following morning we took a drive back to Paestum. We were going to get quite well acquainted with this road over the next could of days. At Paestum we drove past the free parking and decided that it was too empty and exposed for us to feel comfortable leaving Bertie there all day. We drove on into the main drag to see what the car parks were like. Here we would have to pay but it felt more secure, possibly unjustified, but we are more comfortable with our security when we have gone with our gut instinct. We drove into one car park with a sign saying €5, but this was last years price, it was now €8 (they had the tickets printed up to prove it) – what would it cost to stay overnight? still €8. Did they have services for motorhomes? yes, but not open at the moment. Could we be bothered to find somewhere else? No!

So we settled into a nice parking spot in the attended car park and made our way to the ruins of Paestum. This site was established as part of ‘Magna Graecia’, the name given to the Greek settlements that covered much of southern Italy between the 8th and 3rd centuries BC. Originally it was called Poseidonia, after the Greek god of the sea, but was re-named when the Romans took control. Despite the fact that it became a Roman city it still has a significantly Greek feeling, not least because of the three impressive temples whose stout pillars still stand. The Roman empire was very good at appropriating and re-using the best bits of the cultures they conquered.

The tickets for Paestum are sold in the museum so we started by looking around the exhibits. This was an interesting and modern museum with well laid out exhibits that traced the history of human settlement in the area from prehistory to Roman times, plus a few interesting exhibits about the archaeologists who uncovered the site and the Second World War allied landing at the nearby beach (the temples were off limits to bombing from either side). Most of the exhibits were labelled in English as well as Italian and there was a lot more to see than we expected. Our favourite exhibit was the famous Tomb of the Diver, beautiful frescoes from the lining of a young man’s tomb. 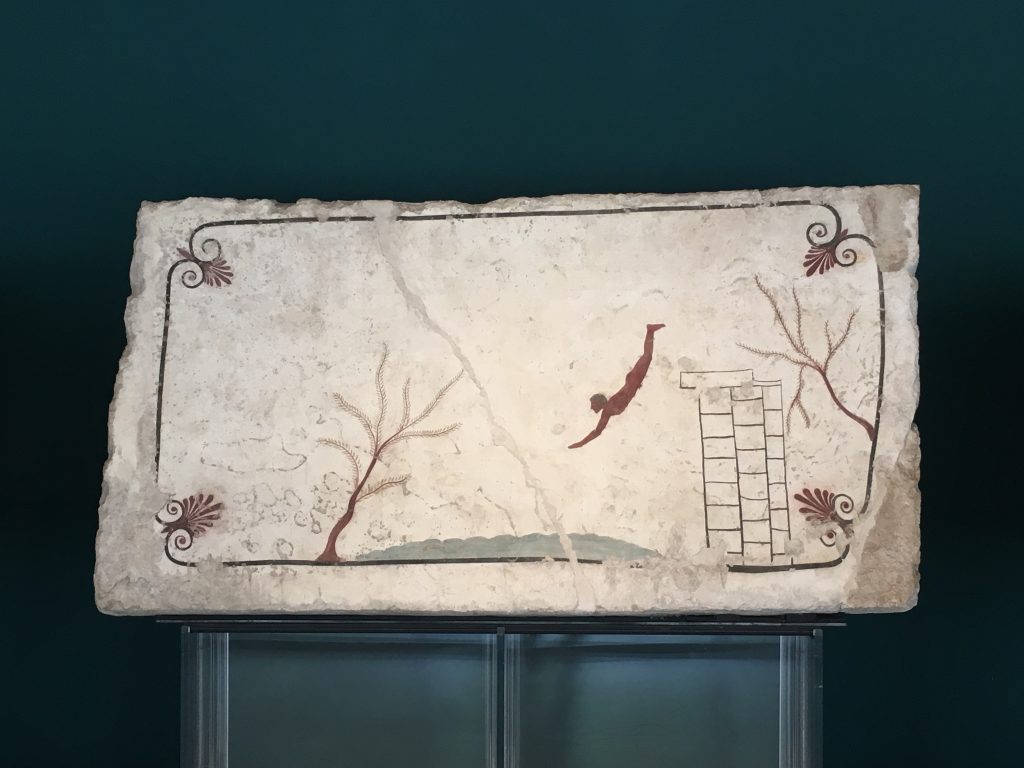 The fresco of the diver

Wandering around the site itself was the same as we have experienced in many parts of Italy, much to see but very few labels to explain what you’re seeing. It is definitely worth doing some research in advance so that you know where to go.

Wandering round the site with us was a Swiss family (their motorhome was parked next to Bertie when we got back) and an British group plus some young people who seemed to be doing a photoshoot in the temple (the poor girl was wearing a beautiful but flimsy looking dress), but apart from that it was beautifully quiet. As was that night’s sleep.