Oour plans to walk on Vesuvius were being delayed for a couple of days due to a rainy weather forecast. We couldn’t decide how to spend the wet days; Naples didn’t tempt us, we were all citied out from Rome. Eventually we decided that we would explore the coast. Even in the worst weather we still enjoy watching the sea even if it’s from the confines of Bertie.

First up we thought we’d drive to Sorrento. The ‘Amalfi Coast’ road that runs along the south of the Sorrento Peninsular between Positano and Amalfi  is not accessible to motorhomes (unless you drive between midnight and 6am), but motorhomes are allowed to drive the rest of the coast, although it’s best to treat it as you would mountain roads. A bit of investigation revealed there were no campsites open and a dearth of motorhome parking, but we thought we’d take a look. We drove towards Sorrento with the hills of the peninsular shrouded in fog, the few parking spots with views were on the edge of the road and weren’t somewhere we would envisage staying overnight. With the poor weather and frustrations of finding parking we gave up and decided we’ll come back in spring when the campsites open.

Second option was to head down to Salerno. Well, that was a mistake, the beaches here were rubbish strewn and subject to the same sort of development we had seen in Mondragone. Maybe the area wasn’t quite as depressed, we didn’t see any beggars or ladies of the night, but it was still ugly and dirty. Having driven around and looked at a few parking spots we decided we didn’t feel comfortable ‘wild camping’ here so picked an ACSI campsite to spend the night. Thankfully the owners were friendly and helpful which did cheer us up a bit, it seemed that most people used the campsite as a cheap base for exploring Naples, Pompeii and the Amalfi coast, which is fair enough, public transport here is cheap and reliable. I cant imagine choosing it as a place to vacation without the lure of the more attractive coast to the north. 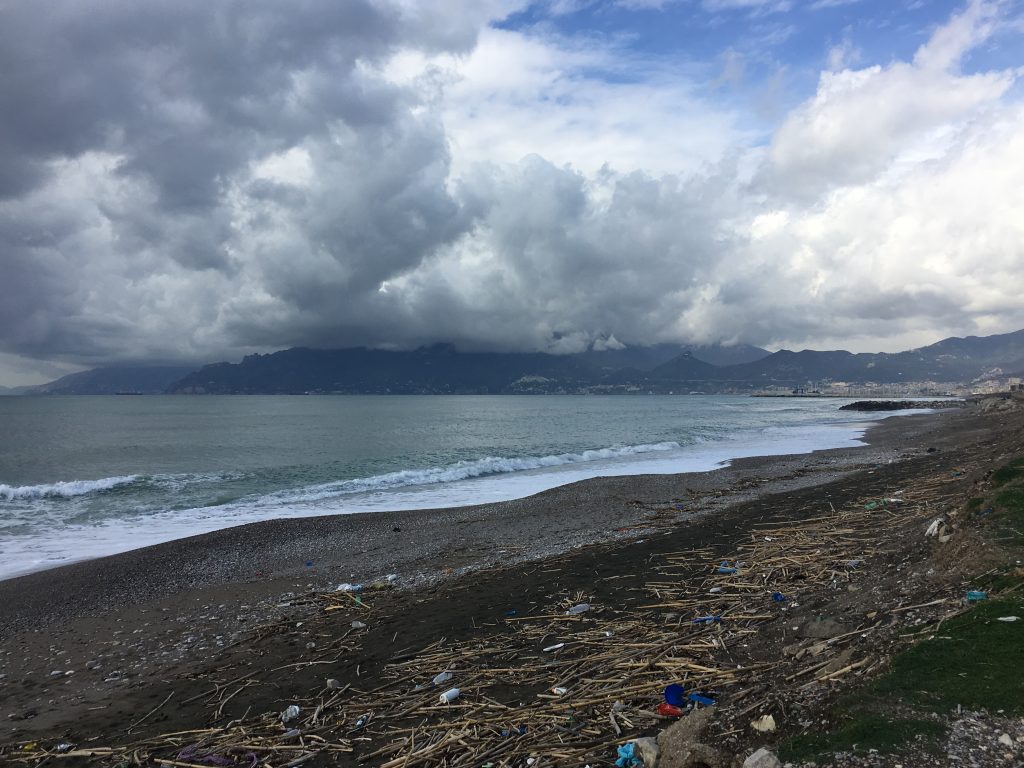 View from Salerno – if you keep your eyes on the distance then it looks quite beautiful. Closer inspection reveals the usual beach detritus of plastic bottles and footwear.

The following morning we weren’t sorry to leave and head back towards Vesuvius. We’d decided on the route we wanted to follow to the summit of the volcano and were going to try parking near the start of the walk. This put us in a layby at the end of a mountain road opposite a restaurant. What we had forgotten (we’re not very romantic) was that it was Valentine’s Day. The owner of the restaurant came out and apologised, he didn’t have any tables available that evening (not that we’d even thought about it) and if we were staying the night he would have to charge us for parking. We dithered over this, it was a public highway, why would we pay? But a little wander showed us that he had no where else for his patrons to park. He only wanted €5, so we decided to stay and pay up. We watched him directing the cars in and out of their parking spaces that evening like a game of Tetris. I think we got pretty good value.

Our journey to our parking spot had been an interesting one, and avoiding a repeat of the experience was another factor in deciding to pay up for our parking. We drove through the sprawl of interconnected towns that rings Vesuvius, the roads were busy, with many shops and shoppers. Although the streets were wide enough for two vehicles to pass, the Italian habit of forcing themselves into any parking space at any angle to get as close as possible to the shop of choice meant that we had to continually swerve out over the centre of the road to avoid bumpers and wing mirrors. Delivery lorries and trucks were parked half on the pavement and leaned precariously out into the road, on the verge of toppling over. With so many obstacles the inevitable happened – we hit a wing mirror. Now maybe an Italian driver would have just stopped there and sorted it out without any care for the traffic building up in both directions. But not us, in a bit of a dither we beckoned the lady in the car to follow us to somewhere we could park and let traffic flow past us. This took a bit longer than we expected. As we searched for somewhere to stop the poor woman followed us tooting every now and again to ensure we didn’t forget about her. Finally we found somewhere, maybe 5 minutes later but it felt like an eternity. With the rain sheeting down Paul popped out to see what the damage was. With his trusty screwdriver he popped the wing mirror back onto it’s mount, all the while listening to the lady spout in Italian. She seemed satisfied with the repair though and nodded her acceptance before driving off.

After a couple of frustrating days we were crossing our fingers hoping we would wake up to a good day for walking.