Snow had been falling on Bertie on Valentine’s evening. Fat flakes that hadn’t settled on the road but had frosted the trees. We didn’t know what Vesuvius summit would be like but chances were that the summit cone would be closed.

On Vesuvius there are nine marked walking routes of various lengths. Route 5 is ‘Il Gran Cono’ – the walk around the summit cone – and is the most popular. A ticket is needed for this which is purchased from a ticket office just below the summit, buses run from Naples and other spots, transporting people up the mountain to the ticket office so that the summit can be approached pretty easily.

Getting ferried practically to the summit didn’t appeal to us, we wanted to spend more time ascending the mountain to get closer to the volcanic terrain. Our chosen route was La Valle dell’Inferno, this spoon shaped route joins up with the summit walk at the ticket office so we could get right to the summit as well as seeing more of the mountain. Information about the various routes can be found here.

It was Paul’s birthday, so I allowed him a lie in before we set off. I made our packed lunch while he was busy snoozing and waved at a couple of mountain bikers who were setting off up the mountain. By the time we were ready to leave they were coming back down again, giving us a brief ‘Ciao’ as they sped down hill. We set off following their tracks uphill along a steeply zig-zagging asphalt road that soon became a dirt track. At first there was little snow but as we ascended we started to encounter more patches of snow and the melt off the trees pattered down on us so that we were glad we had hoods on our jackets. We were in awe of the cyclists who had slogged up this hill through the snow. 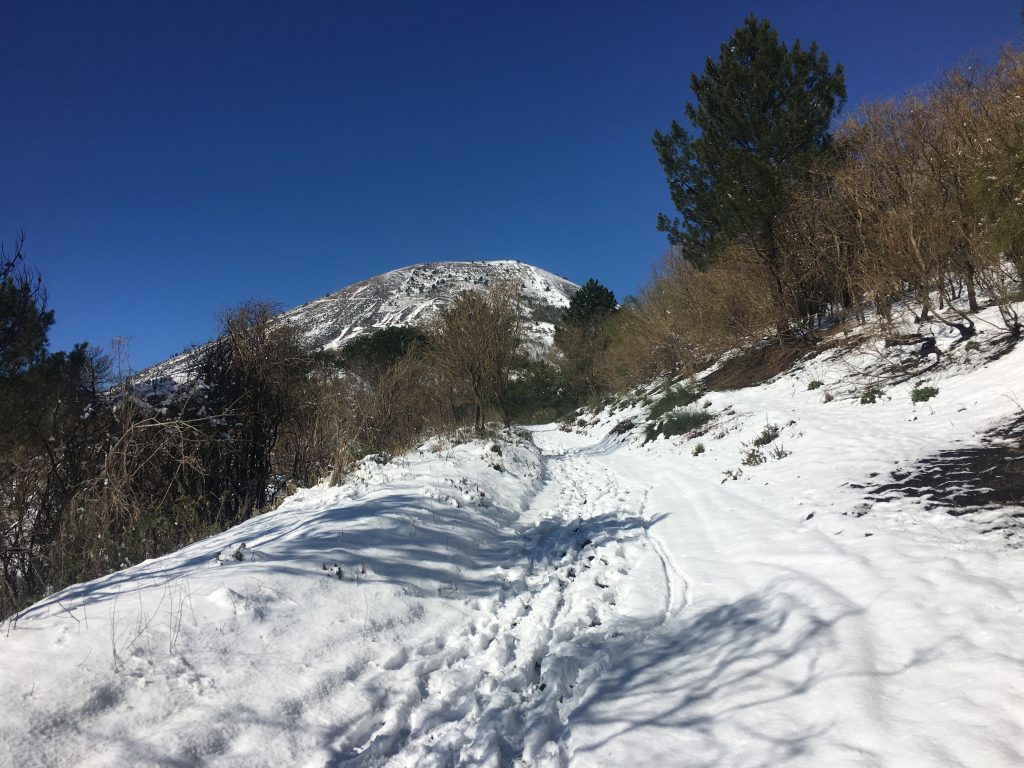 Following bike tracks in the snow

We reached a point where another route split off, there were a couple of useful map boards here. We kept left to follow our chosen route which continued to ascend through more and more snow up to a plateau where the route became circular. At this point we made a pact that if the snow got more than ankle deep we would turn around. We had gaiters and waterproof trousers but it would be foolish to walk on an unknown path in deep snow. We could see that this was the point where the mountain bikers had given up and turned downhill. 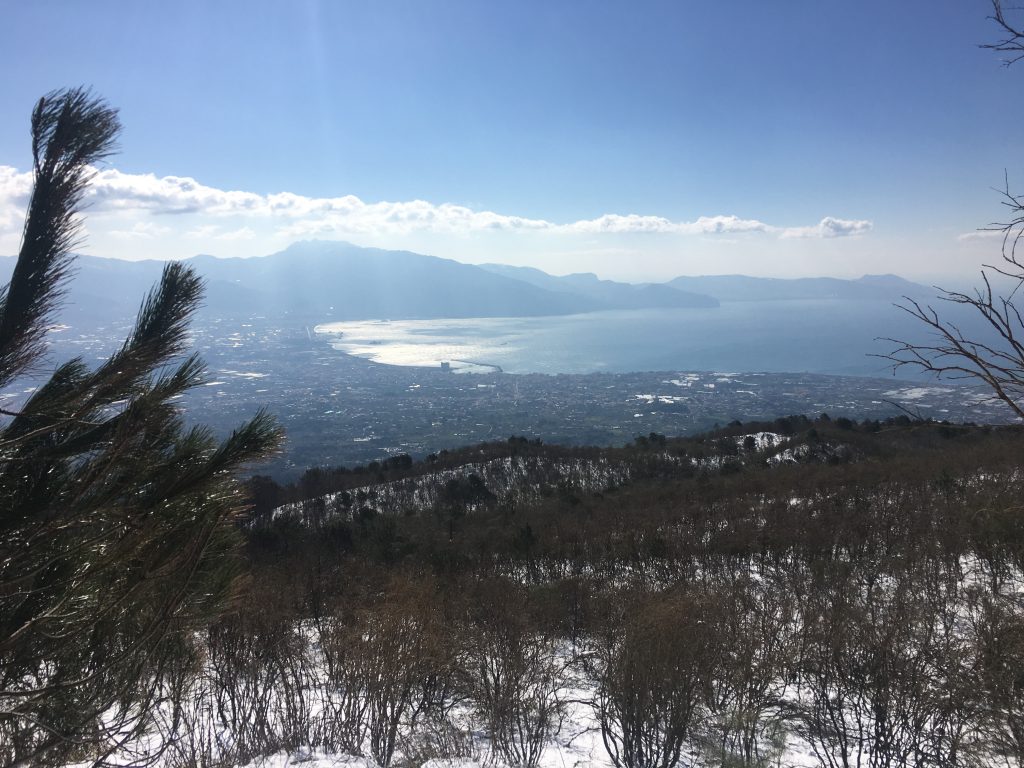 Luckily the snow stayed about ankle deep all the way and only got deeper in pockets where the strengthening wind had blown it into small drifts. From the plateau we found our route markers leading off to the left through sparse alder trees, some of which had been blackened by forest fires. Eventually we made it to a cobbled road, still mostly snow covered, which we followed to the ticket office. The views along this section were beautiful with the snow covered cone of Vesuvius rising in front of us and a ridge to our right. 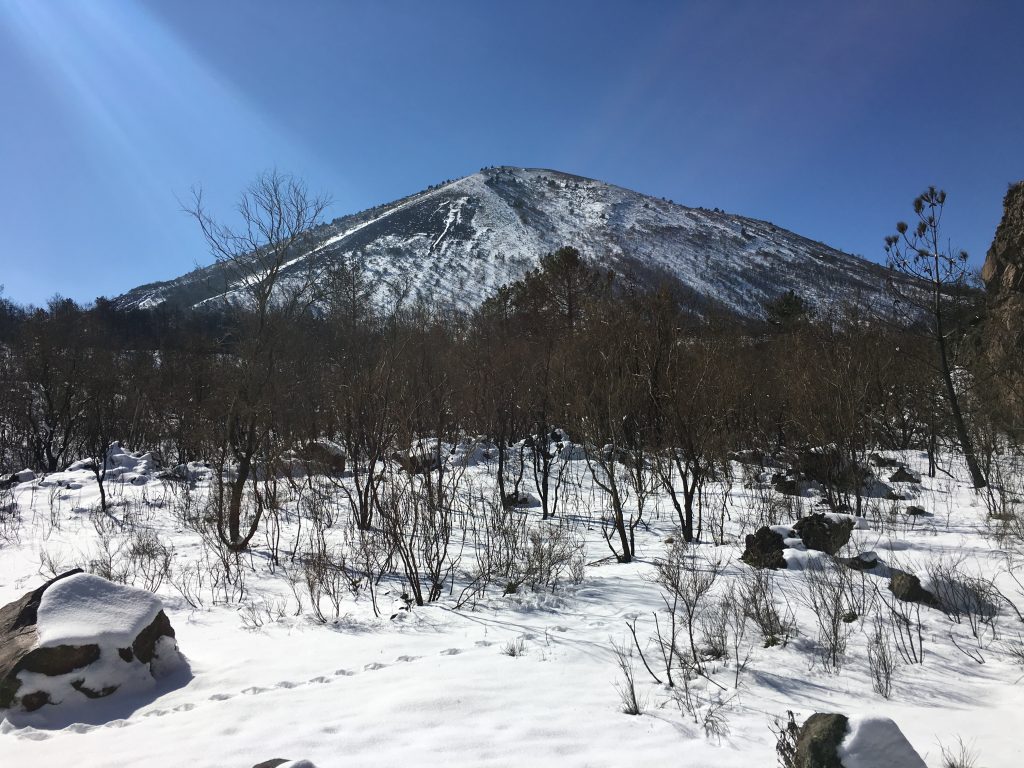 We could see views of the summit cone as we walked

Between us and the ridge was the Valle dell’Inferno and our return route would take us down here, but first we had to get to the ticket office. It was closed as we had suspected. We stopped here to have our lunch on the useful picnic benches as we decided what to do. We could retrace our steps and take an alternative path to the summit, but we didn’t know whether we would be able to make it to the top or whether it would be fenced off. It was Paul’s call as it was his birthday – he decided that we should continue our route and not try to get to the top, the biting wind had put him off continuing further uphill. 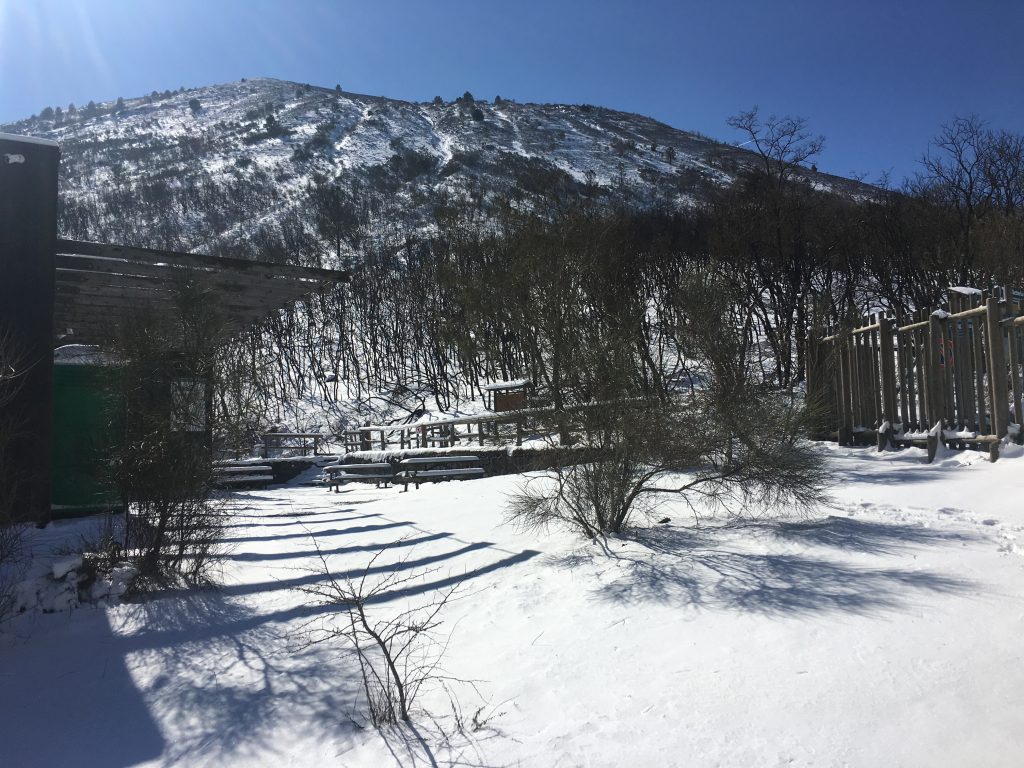 Outside the ticket office

It took a bit of a search to find the snow obscured path down into the valley, but once found it was a pretty straight forward to follow between trees with the twisted formations of lava cliffs on one side, festooned with icicles. 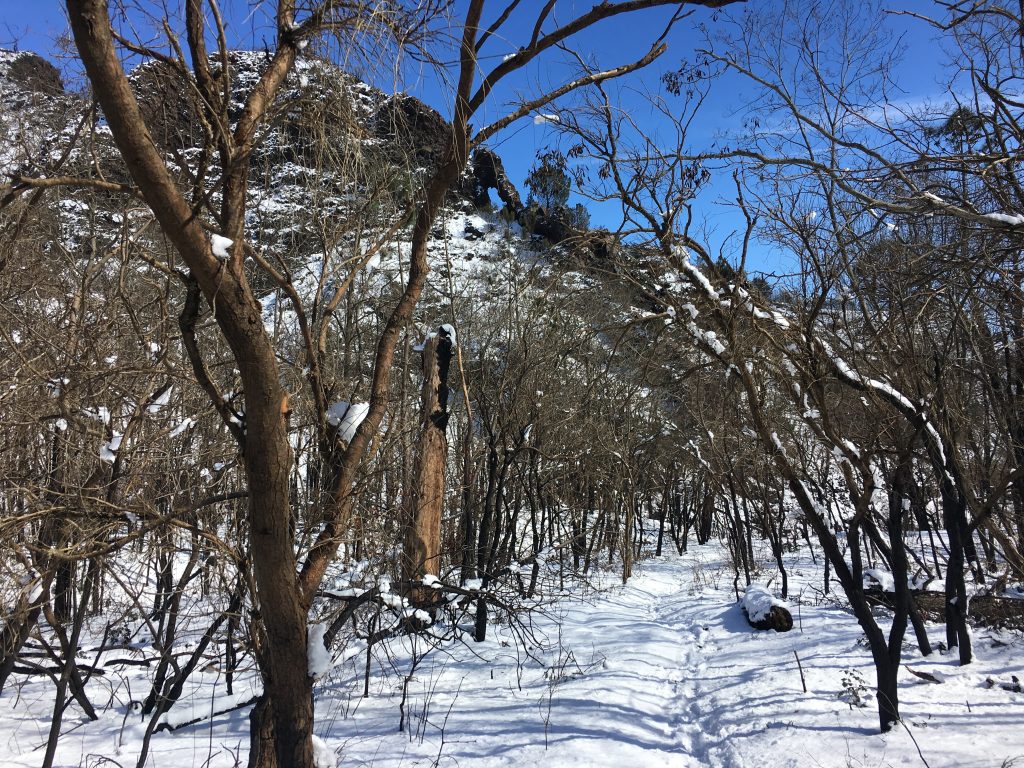 Lava formations in the cliffs above the Valle dell’Inferno 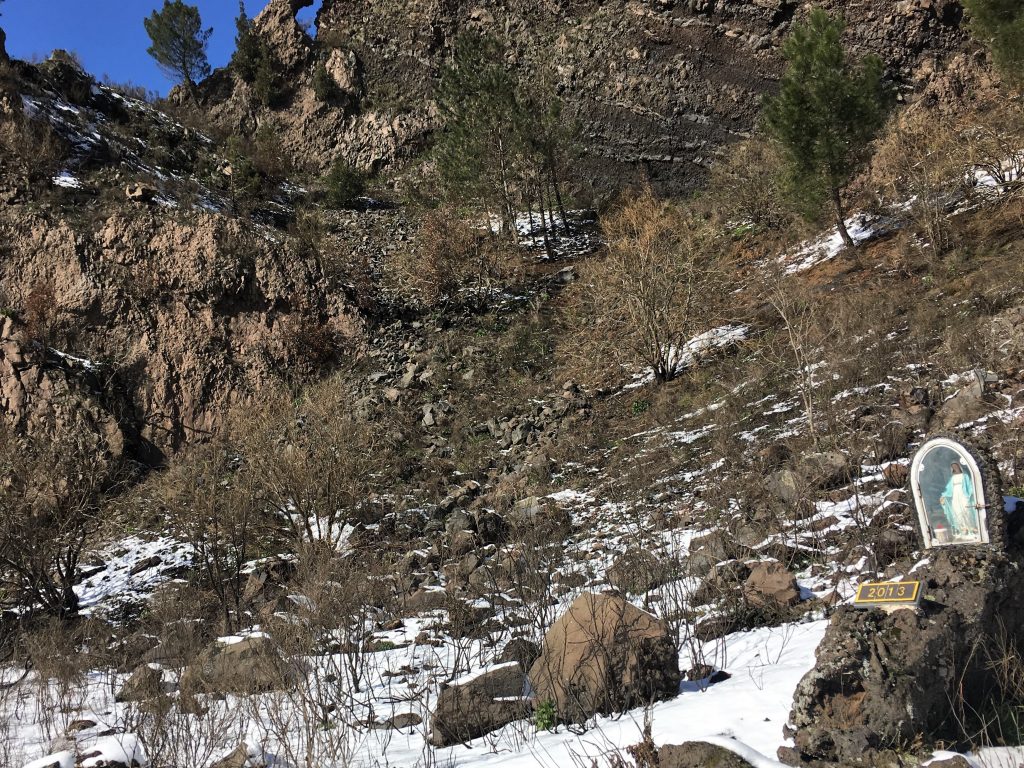 Shrine in remembrance of a mountaineer who fell to his death, a stark reminder of the danger of walking in winter conditions. 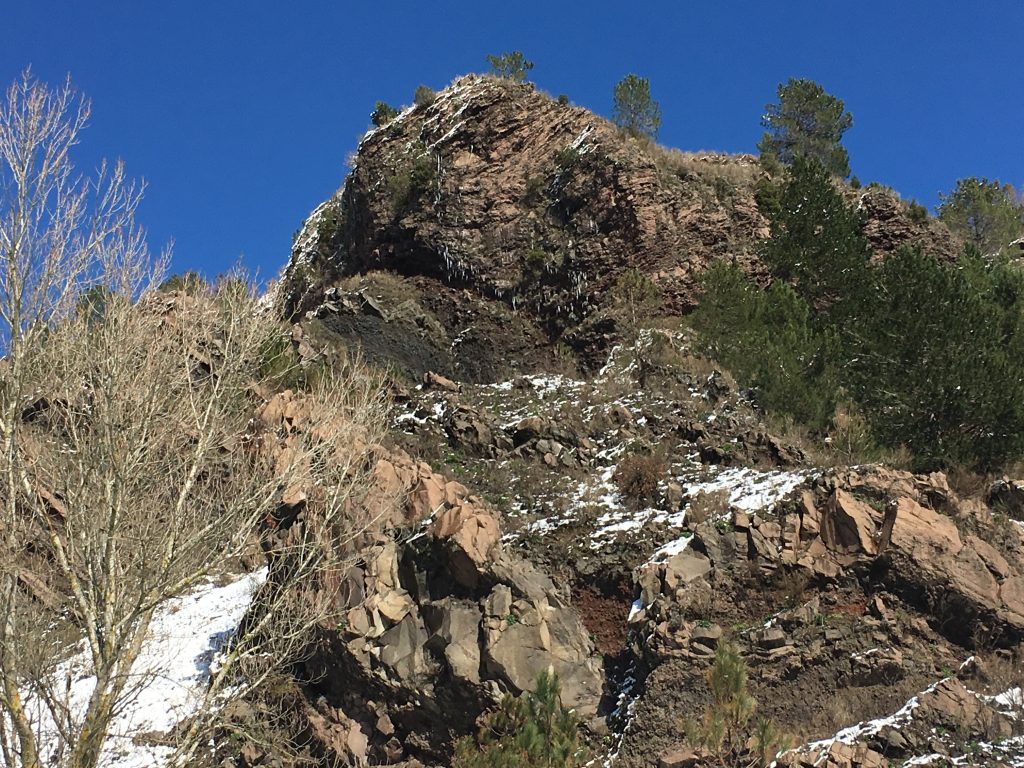 Volcanic rock formations with a beard of icicles

Finally we reached the plateau again and were able to follow our original route back downhill to Bertie. By now the snow on the paths was starting to melt, but we could still see our own footprints melted into enormous yeti style tracks.

We rewarded ourselves with a cuppa when we got back to Bertie before we moved on. We were now going to follow a route north along the Adriatic coast. Our next stop was on the eastern side of Vesuvius near Caserta. This time we decided to take the toll roads rather than try to navigate through the towns.