It had been some time since we last did any washing. Our washing bag was filled to bursting and we hadn’t come across any convenient self service launderettes since Sondrio (I have an aversion to serviced washes as I don’t like the thought of handing our sweaty smelly clothes to someone else to launder). With no other options available we decided to check into a campsite.

Camping Mimosa is an ACSI campsite near Nicotera, one of few campsites that are open all year round. The fact that it was open, and the friendly owner, are the main things going for it. It’s pitches are small and awkward to get into with narrow avenues between trees making it difficult to manoeuvre.  We nabbed a pitch that was on the end of a row so that we could get in and out easily, other arrivals were less lucky, and one large French van had a particularly difficult time getting out. Unusually the campsite offers private bathrooms, we got a key to a cubicle with shower, basin and toilet. Sadly the showers weren’t great, a bit tepid and weak. The cubicles were dated, but at least they had toilet seats – yay!

We did our washing, managing to get it hung out to dry in between rain showers. I dyed my hair, we did a few chores and finalised the booking of hire car and secure parking for Bertie when my sister visits in April.

One of our chores was the fixing of the toilet cassette. We had been putting this off for a while as it involved sticking a hand inside the cassette. But it had to be done as it was getting awkward to empty the cassette without any leakage. Our issue was the 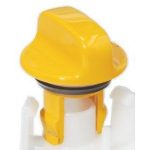 seal around the ‘Blade Opener’, a switching mechanism that you use to open up the toilet when you go to the loo. 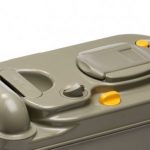 The seal was not working effectively and so a dribble of the toilet contents would escape unless you held the cassette horizontal. This included leakage while in transit – ugh! Armed with some disposable gloves I stuck my hand into the cassette and followed Paul’s instructions to remove the blade opener. Then we cleaned it and, with some difficulty, replaced it. We also cleaned the seal around the blade. Fortunately it has done the trick so we wont have to repeat that experience for a while.

We ended up staying here for three nights as the rain, thunder and lightening were just so bad on the Thursday that we didn’t see the point in moving. We were a bit stir crazy by this point and crossed our fingers for some better weather so we could get outdoors.