After the rainy days stuck in the campsite we were keen to get out and about. Our aim was to head to Gambarie, a key town in the Aspromonte mountains and a hub for outdoor activities. The weather forecast still had a lot of rain in it though and we didn’t know the altitude where this would be falling as snow. We hoped to get to Gambarie before the snow started to fall, but as we climbed up into the mountains it started to rain, and eventually this turned to snow.

Being caught as snow was falling and settling put us in a tricky situation. There wasn’t enough snow for snow chains or to get the snowploughs out, but there was enough to make the going slippery. Possibly with full winter tyres we would have felt fine to carry on, but with another couple of hundred meters of altitude still to gain, narrow roads and lots of switchbacks we just didn’t think it was sensible to continue. We carried on for long enough to find somewhere we could turn around, a more difficult proposition that you might think as the area was sparsely populated and the snow made it difficult to tell whether a turning area was solid asphalt or mud. We eventually found a closed hotel and Paul turned us around in their drive. We weren’t going to make it to Gambarie in this weather. 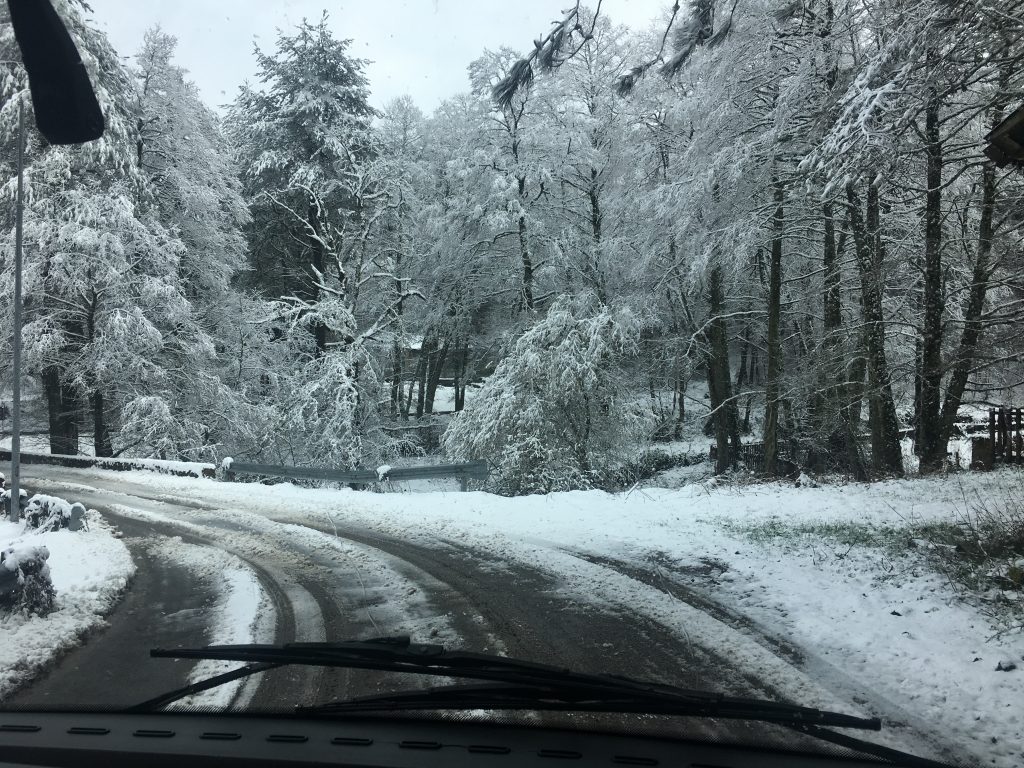 Snow falling on the way to Gambarie

Now we were discombobulated. Our plans had only gone as far as the mountains, and with them out of reach we needed to decide where to stop. Lacking any other plans we made our way back down to the SS18 that runs along the coast and started to drive east. We would decide as we drove.

First attempt was Scilla, a pretty little coastal town with an impressive castle. We drove along the town’s main road to see if we could get parked on the seafront, but there were signs stopping Motorhomes from accessing the small areas of parking on the front. The station carpark looked like a possibility but made us feel a little uncomfortable taking spaces for rail passengers. So onwards we went all the time with views of Sicily to the right and the Aspromonte mountains to the left.

Next was Villa San Giovanni, but we couldn’t find a way under or over the railway to the coast. We weren’t in a city mood so Reggio Calabria didn’t appeal. At this point the SS18 ended and we moved onto the motorway. Along this stretch of coast the motorway runs above the train tracks and the railway hugs the tide line, because of this there are no built up coastal resorts and the strand looks invitingly undeveloped but is inaccessible to large vehicles.

During our lunch stop we looked further ahead and saw that there were a number of parking spots coming up along the coast. It seemed like we were entering an area where parking was tolerated on a longer term basis. We kept an eye on the coast for motorhomes and as we passed the station for Ferruzano we saw them lined up along the front. A quick turn off the main road and a drive under the railway bridge that looked like it wasn’t going anywhere took us onto a long stretch of lungomare.

We stopped for the day and parked ourselves up on the grass amongst a row of motorhomes of various nationalities. This reminded us of Spain more than Italy, not in the way it looked, but with the long term parking culture. People had made themselves at home with washing lines and windbreaks behind their vans. Some had even created ramps from stone and concrete allowing them to more easily get up and down the kerb to their parking spot. There were small national enclaves and we wondered if we would be breaking any unwritten rules by parking between two German vans.

The seafront here was long and straight with one closed restaurant and a small clot of villas and apartments to the south. At some point money must have been allocated to tidying it up, and a number of paved areas had been built, including the ‘John Lennon Arena’. Superficially parts of it looked clean and new, but when you looked closer you could see that it was unfinished and already dilapidated. Old chunks of concrete and children’s play equipment lay amongst the weeds behind the seafront. Looking beyond the tatty seafront though the views were pleasant and the beach was clean. The parking was free and there were services. It would do nicely for a night or two. 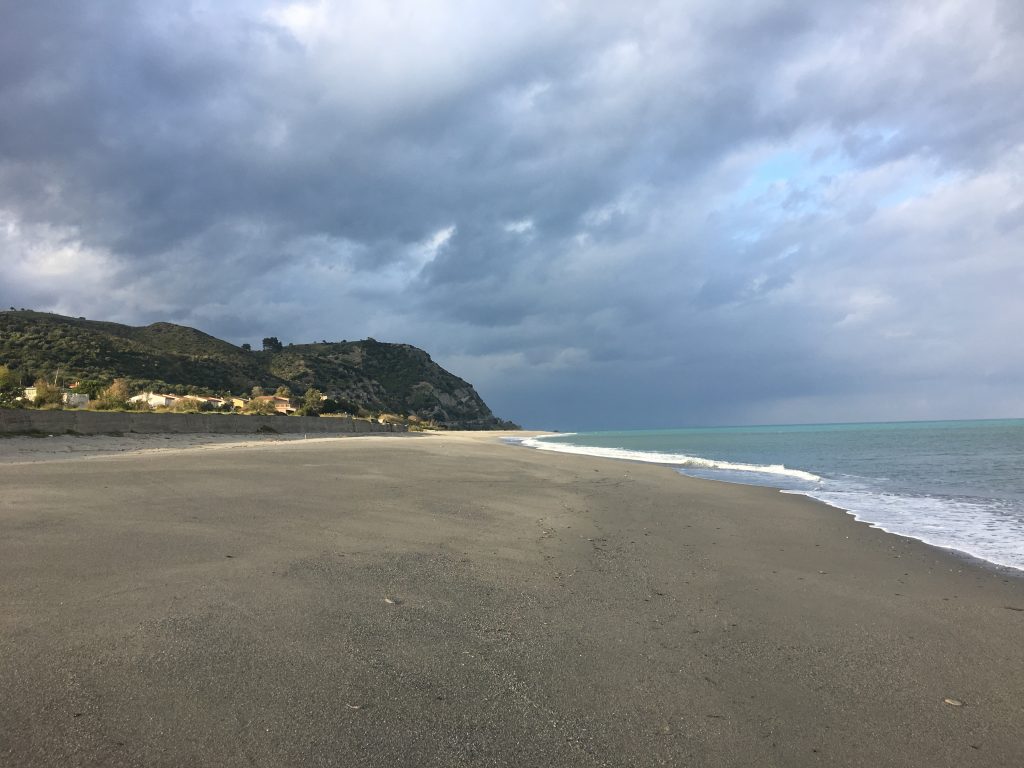 Looking north from the parking near Ferruzano station