Yesterday we had walked up to Prati di Tivo, today we drove up. The large car park which had been full of ‘macchine’ was now nearly empty and the cafes mostly shut. We wanted to have a short walk today, and although it didn’t take us long it was a good lung workout.

From the carpark we decided to take a walk up to La Maddonina (which is the top of the main chair lift) following a CAI path that was marked on our map. Frustratingly our map was out of date and so we had a bit of a struggle to find the start of path 100. The route up now seemed to be 103a and instead of traversing through the woods it went almost straight up to the right of the main chairlift. Once we found it, we had no problems staying on it and we puffed our way up the ski run on a steady and steep incline. A group of deer gave us an excuse to pause and a short diversion around a patch of snow allowed us to stop to recce the route ahead. 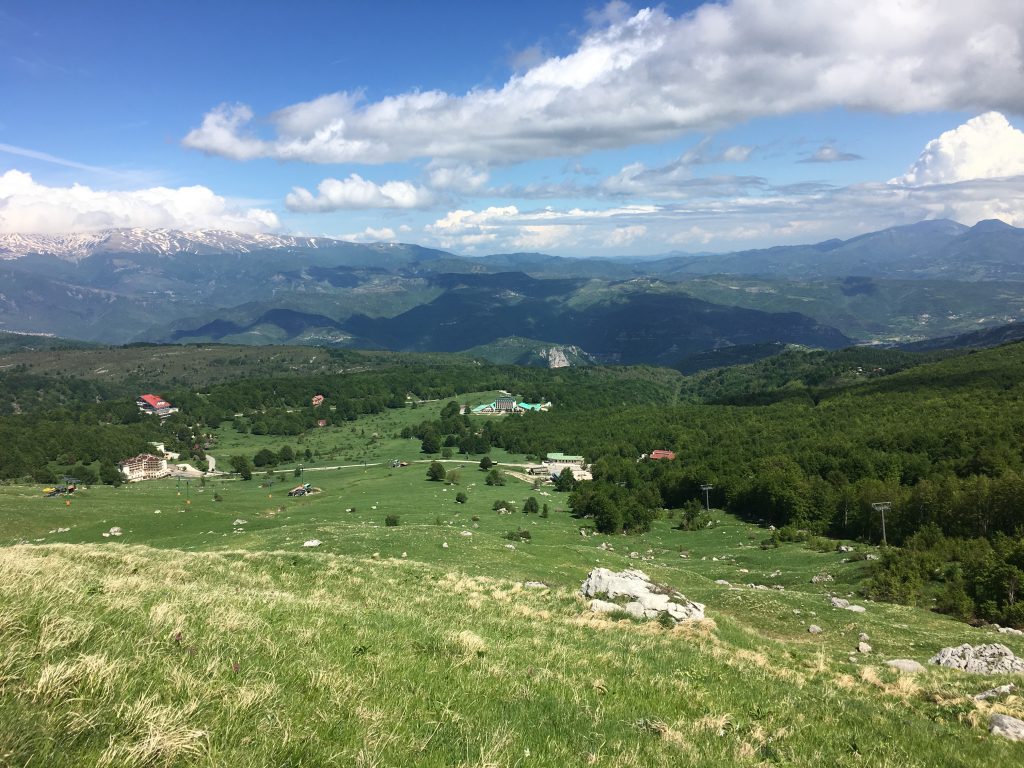 Looking down on Prati di Tivo

Breath caught we managed to get to the top and had beaten the other couple who were walking parallel to us directly under the chairlift (not that we’re competitive). From here we could see the route up Corno Piccolo, invitingly scrambly but currently too snowy for us to contemplate. Instead we took the broad grassy ridge in the opposite direction, past an incomplete hotel with it’s empty staring windows and to the minor summit of Cima Alta. 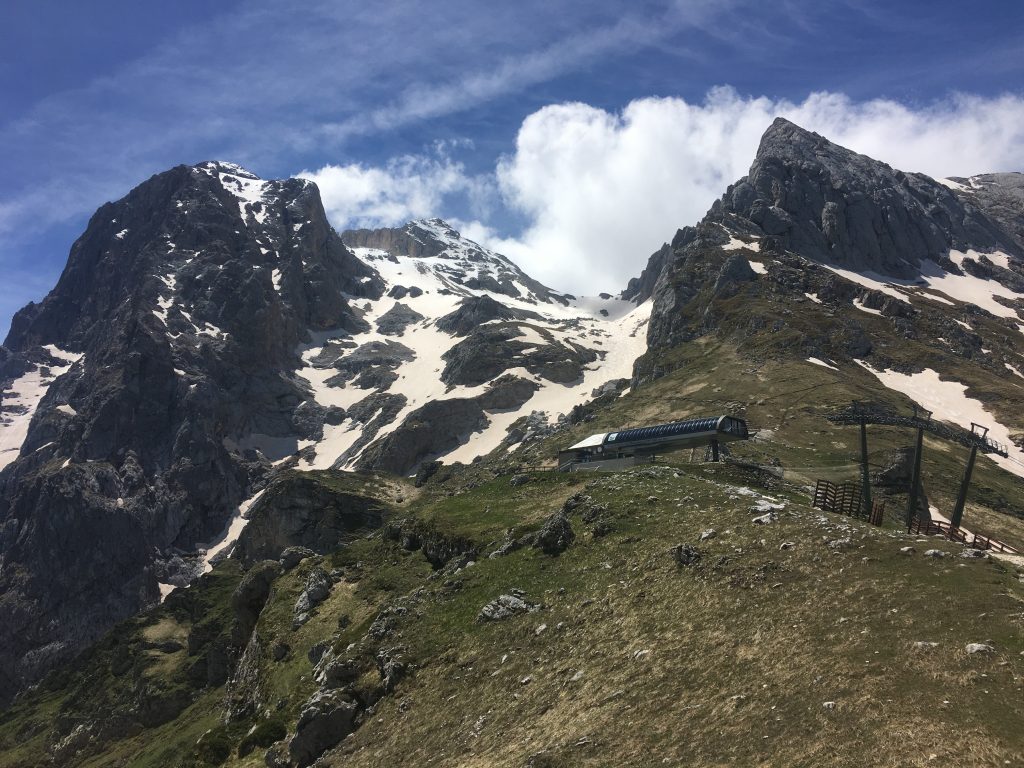 Corno Piccolo and the top of the La Maddonina chairlift

Because it was meant to be a short walk we turned around here and took the route down that we thought we should have ascended. Immediately we realised why things had changed; there is now a set of mountain biking routes and a terrain park where the original trail would have been. We went down it anyway, confident that there were no mountain bikers going to come haring down after us given that the lifts weren’t running, and anyhow the trail was so littered with felled trees and branches that we would have heard any mountain biker swearing loudly a long time before they knocked into us. The descent was rather tortuous now that there are so many routes to choose from, but we stuck to the ‘green’ mountain biking trails to avoid a steep descent and soon found ourselves on the road leading back to Prati di Tivo 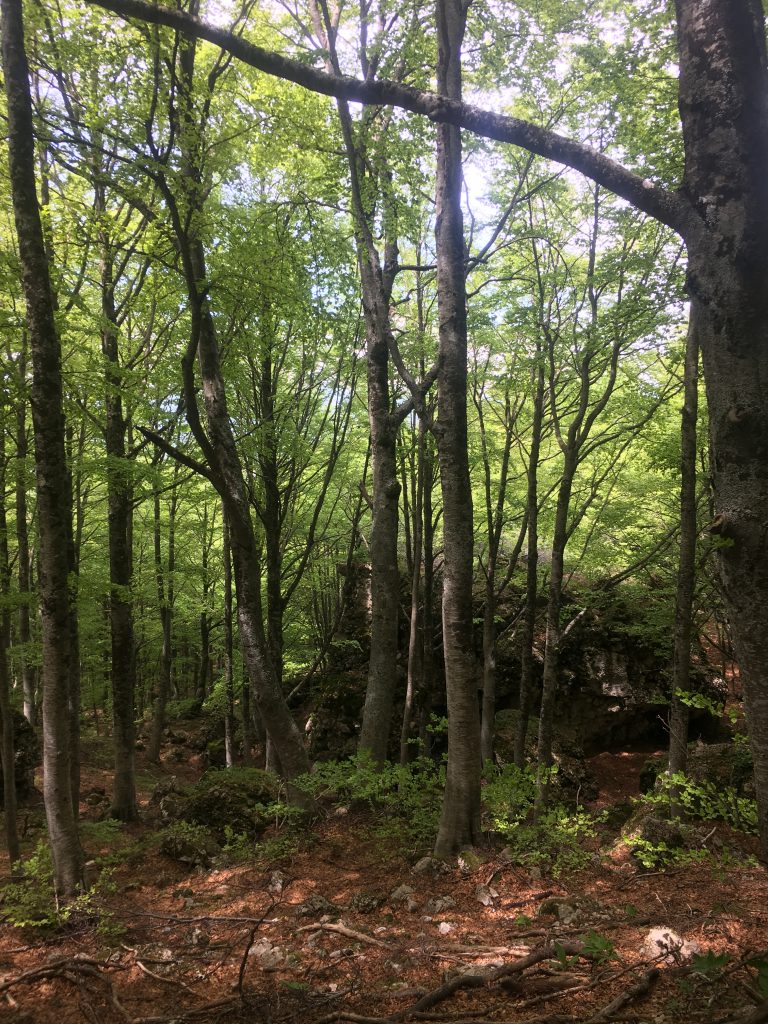 It really had just been a short walk despite the strenuous uphill section so we were back to the van before lunch. We had a bit of a scout around looking for an overnight sleeping spot that might be a bit more sheltered from the winds that were getting stronger in the exposed car park.

As we munched on a couple of speck and cheese pannini we discussed next steps and decided that rather than staying up here in the wind we would go back downhill. That soon led to us agreeing that a lazy day in a campsite would be a good idea. We could rest our legs and do some laundry. 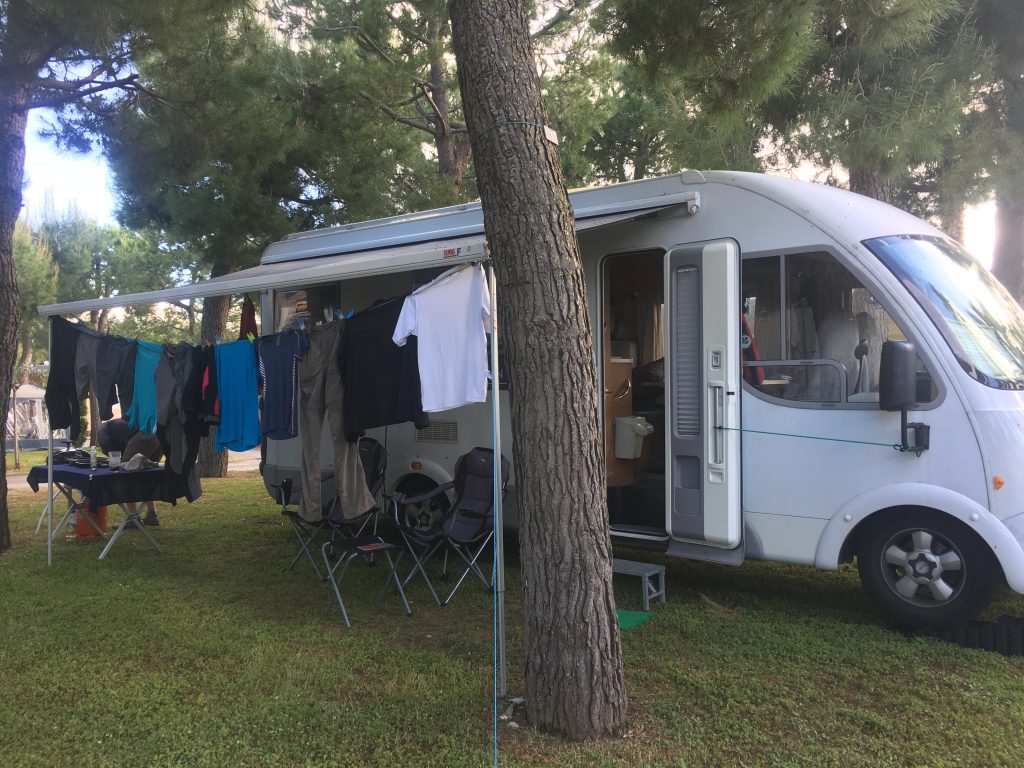 Bertie doubles as a washing line

We weren’t all that far from the coast so we picked a cheap ASCI campsite and drove on to Guilianova. It was one of those Italian beach resorts on a long and uniform (i.e. dull) stretch of coast. The town wasn’t that inviting from the main road, but the campsite was large, busy and well equipped. The seafront had the benefit of a long cycle path so the following day we had some gentle exercise as we cycled alongside the flat road, past small plantations of pine trees, over rivers where herons and egrets waded and through various beach resorts from dilapidated to modern. To our surprise we saw a black squirrel here on the campsite scampering up and down the trees and having a noisy argument with a blackbird. 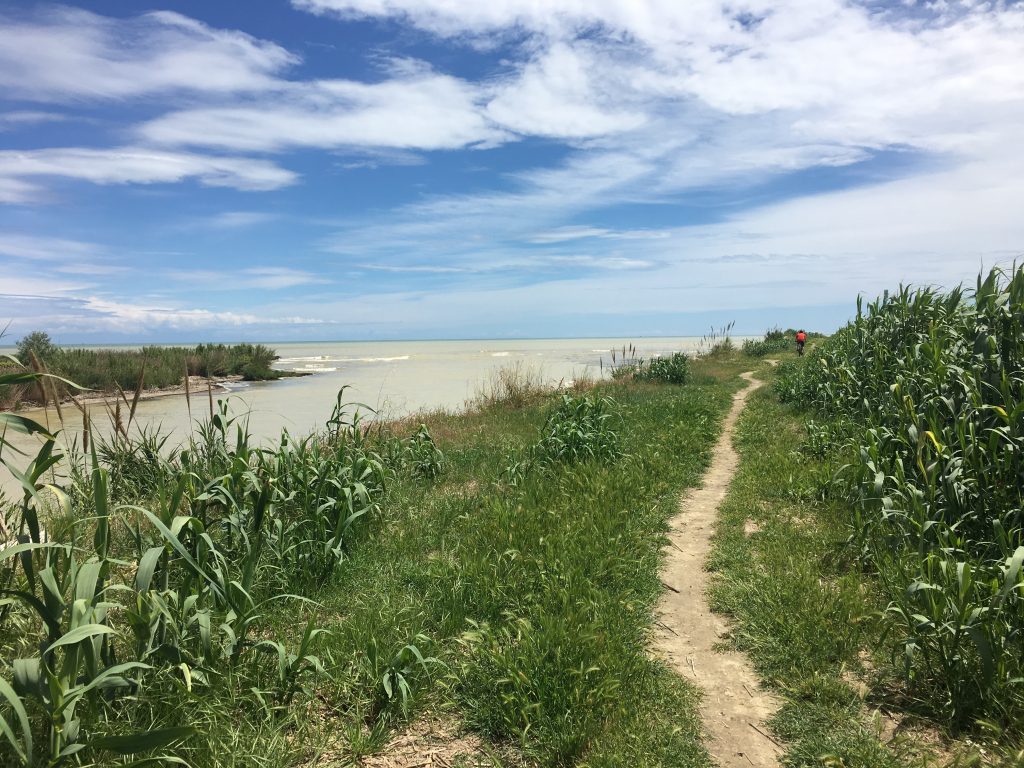 At the end of the cycle path we tried to go further by following the river bank, but the railway line stopped us.