As we travelled around the ridge of the Gran Sasso we started to see more evidence of earthquake damage, this was to become a feature of the next week or so and we never got used to the way in which people’s lives have been turned inside out by such a primal force of nature.

We stopped at Tossicia on the way around the mountains, this small town on the edge of the national park has a motorhome service area near a community centre and some of the ‘temporary’ accommodation that was erected after the 2009 earthquake. The mediaeval heart of the town sits on the edge of a gorge, but wander down it’s lanes and you see buildings that are only standing with support. We watched an older couple drive up and inspect one of the buildings, in my imagination this was their home they were visiting and wondering when or if they would ever be able to move back. 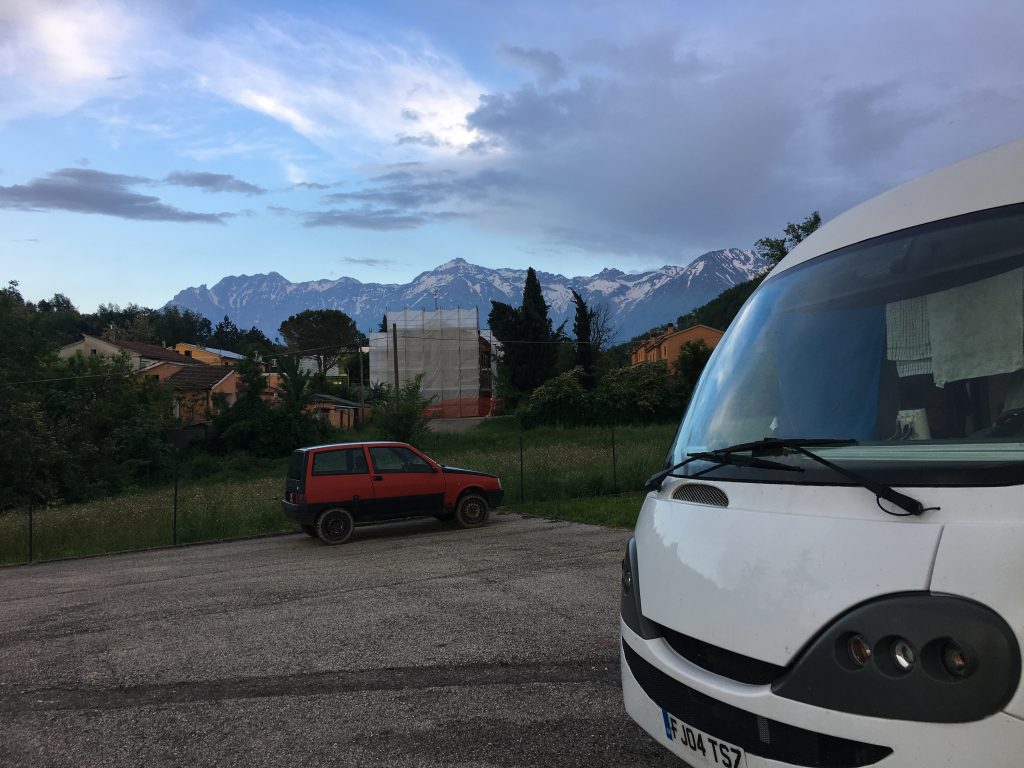 From Tossicia we followed one of the Ippovia – bridleways – on our bikes for a while, but the weather was hot and muggy and after fighting through undergrowth Paul was sweating so much that I was worried he was dissolving like the Wicked Witch of the West. We gave up and turned around getting back just in time for the thunder to start, but the fat spots of rain never really amounted to anything and the muggy atmosphere drove us onwards and upwards. 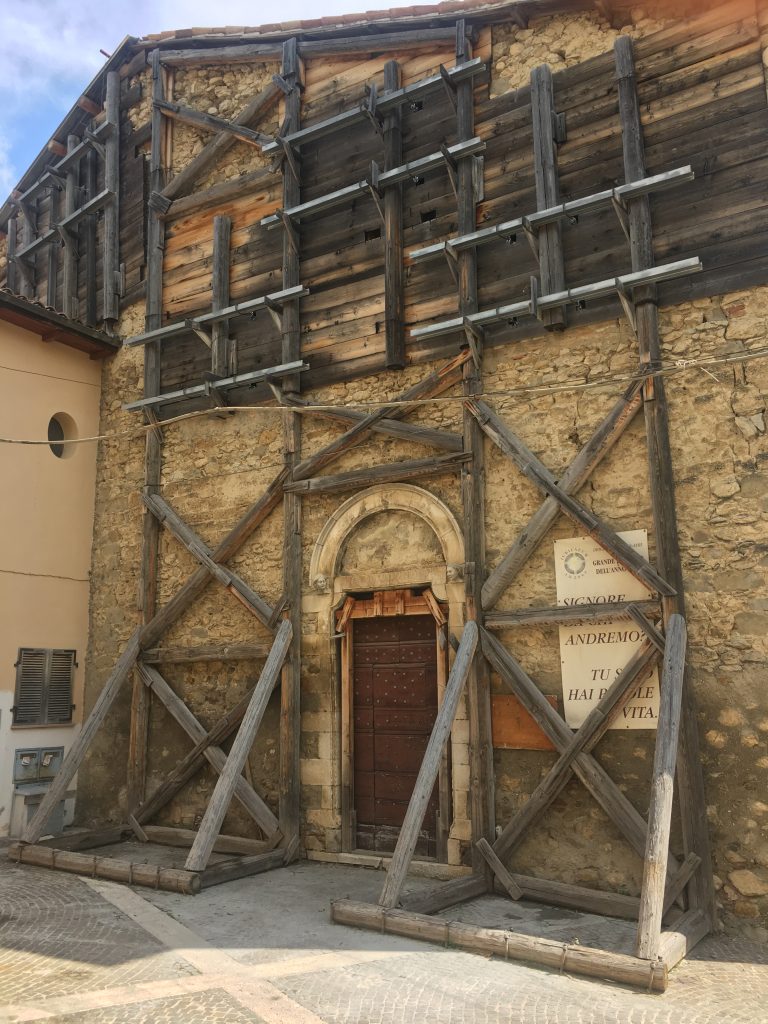 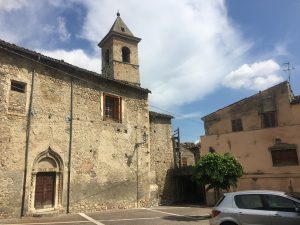 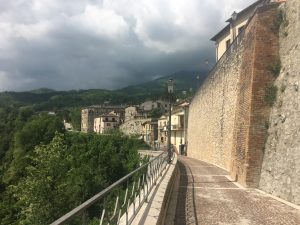 Our next destination was Pietracamela, we drove along the attractive SS80, following the river gorge before turning south and climbing up steep hairpin bends to the village. We thought there might be parking here but it was difficult to tell from google maps due to the tree cover. We almost overshot the turning just before the village which was unmarked and led sharply downhill to some parking on grass-crete just below the church. It wasn’t a dedicated motorhome parking area but no one else seemed to be interested in parking here so it was very peaceful. The car park also boasted a hi-tec recycling station which kept me entertained for a little while. 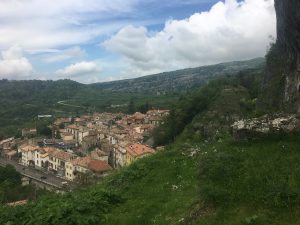 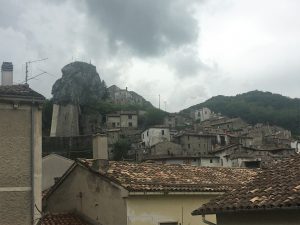 From here we followed a walk suggested by the guidebook we had bought, in fact we joined together three walks to create a circuit that has to be one of our favourite walks of all time, firstly following path 102 up into the spectacular Val Maone and then taking path 100 via Prati di Tivo to Pietracamela.

In early 2011 Pietracamela was subject to a different natural disaster; part of the rock outcrop above the village collapsed and a massive chunk of rock ‘the size of a block of flats’ sheered off from the cliff. As we walked up through the village on the first part of our walk we could see the resulting blocks of rock to the side of the path. We were lucky that the path was now clear as it had been closed for some time until the rock had been cleared away. 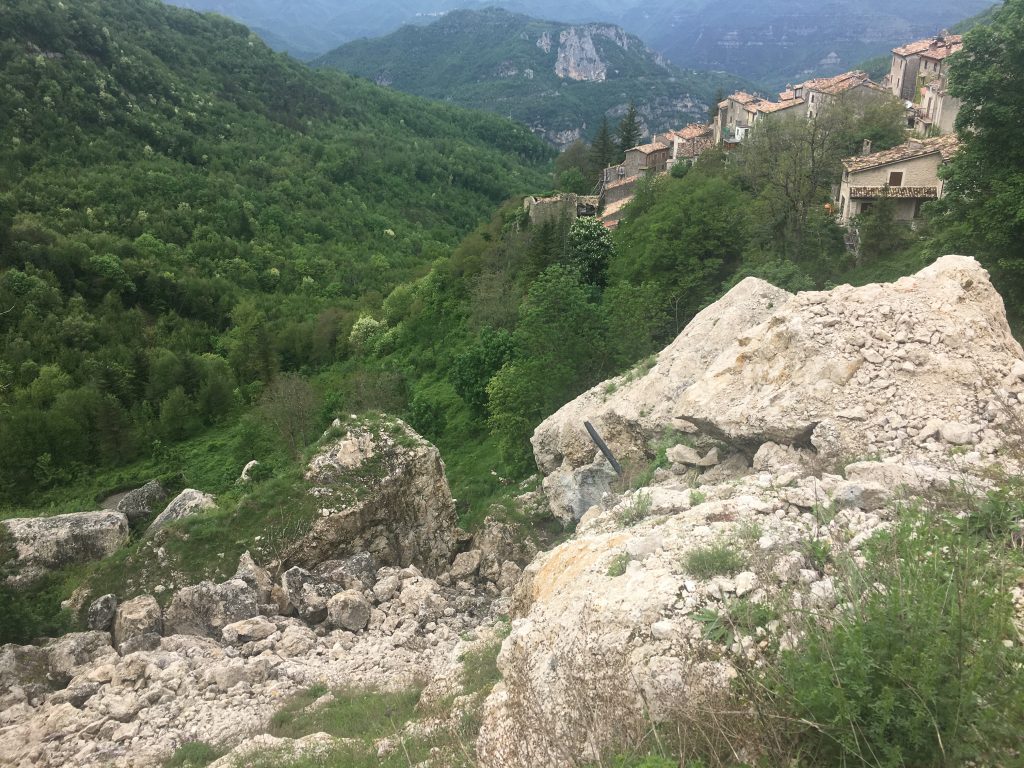 Rocks from the Pietracamela landslip

The path followed the river as it appeared and then disappeared under the limestone rocks. As we walked through the wooded valley we passed memorials to a couple of climbers who had been killed in blizzards here back in the early days of alpine climbing. The steepest part of the walk was a climb up a muddy bank shaped by a landslip and littered with fallen trees before we reached an attractive little waterfall and then broke from the tree cover into the Maone valley. This was the highlight of the walk, a beautiful and dramatic valley between the steep rock walls of Pizzo d’Intermesoli and Corno Piccolo. We walked up here as far as we could, over snow and around huge boulders. On the steep slopes we could see chamois browsing on the short grass and cooling off by laying in the snow. 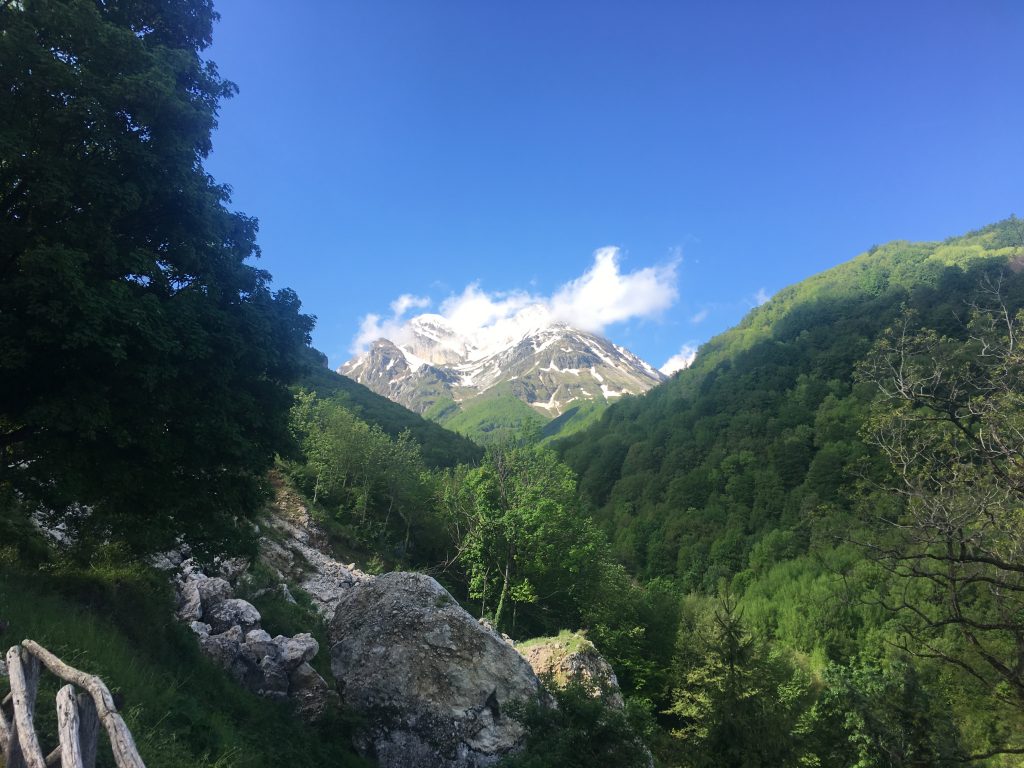 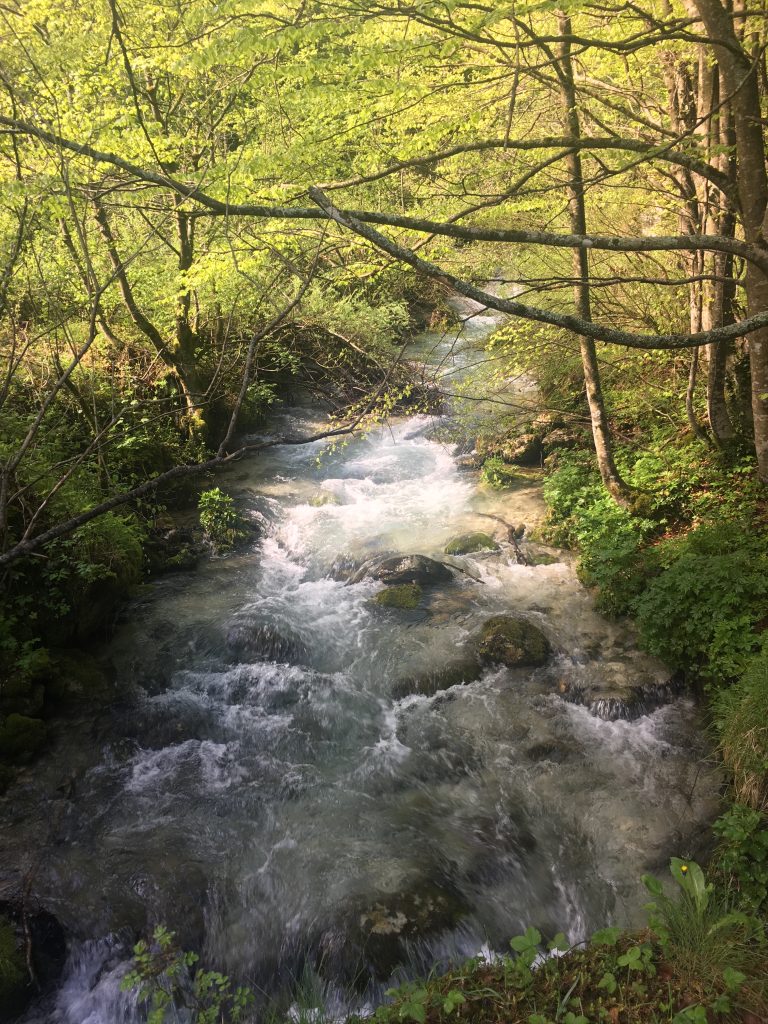 The river tumbling over rocks 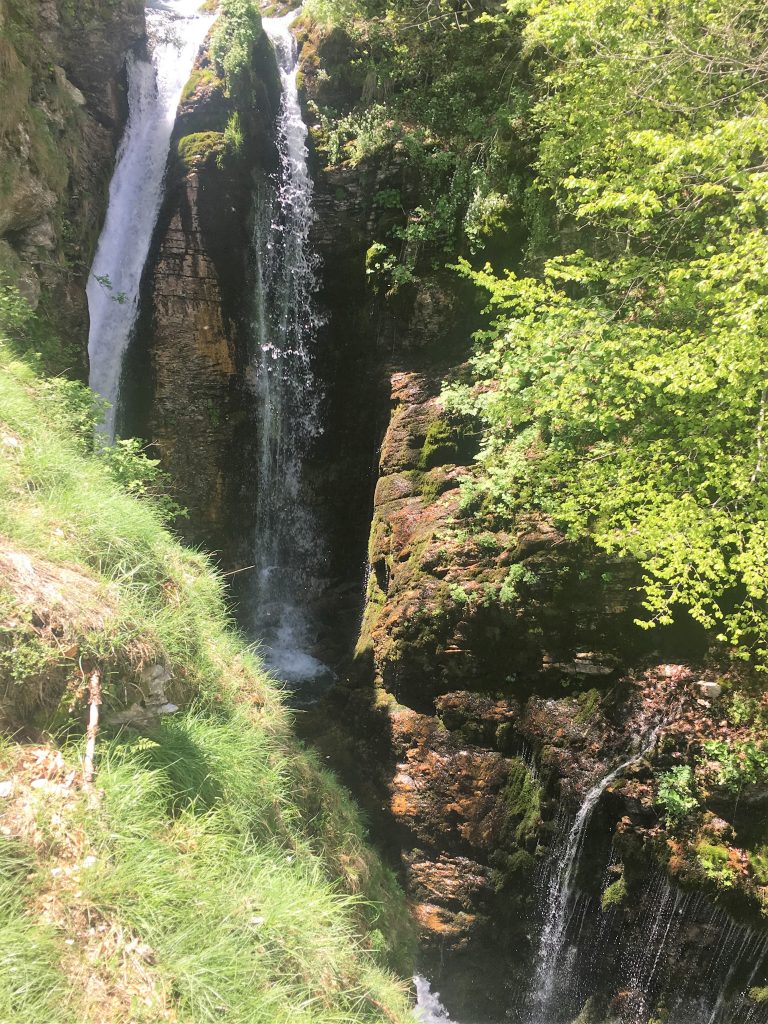 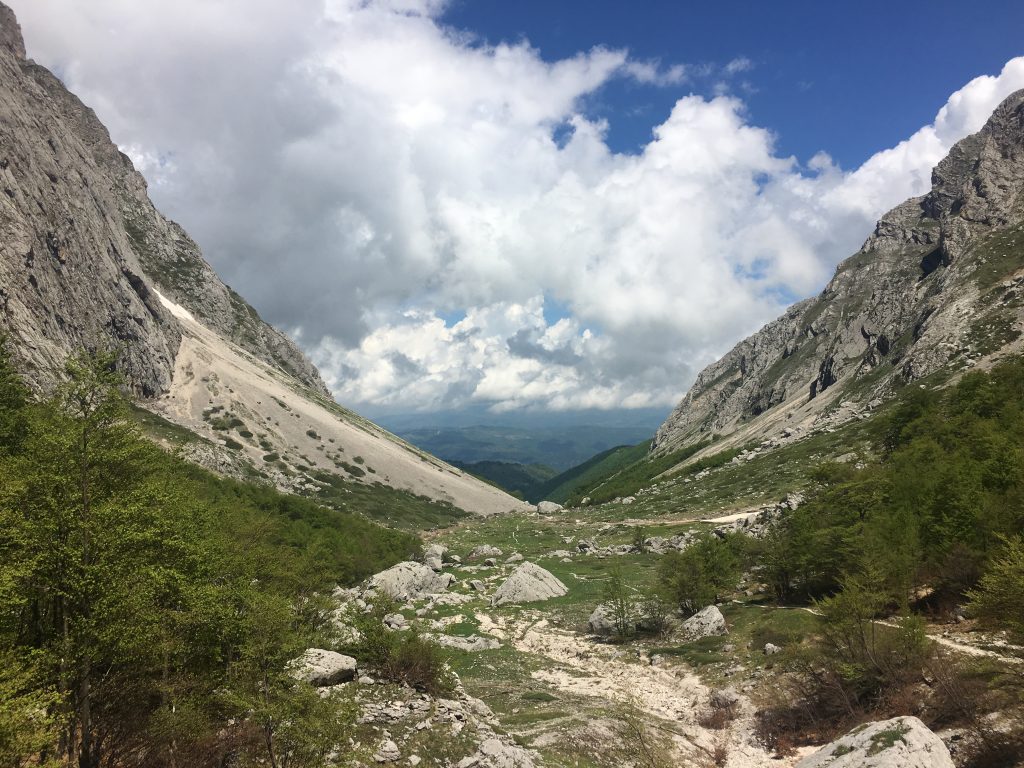 Looking back down the Maone Valley 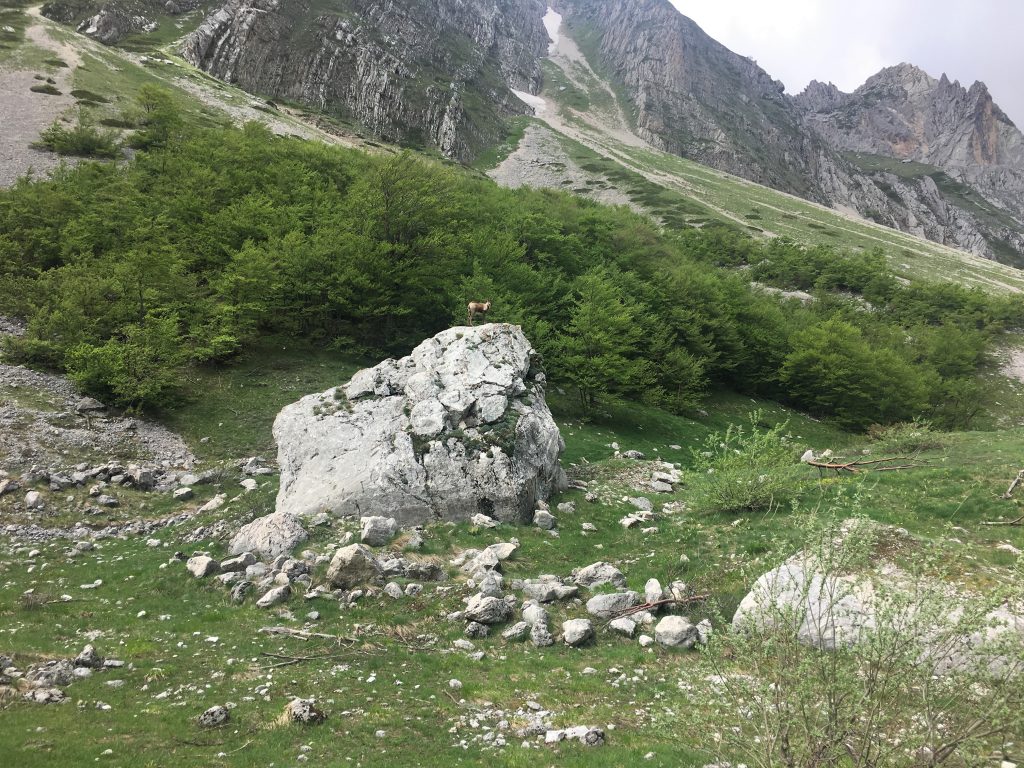 When we had our fill of the valley (and our lunch) we walked back to the waterfalls and took the alternative path across to the ski resort of Prati di Tivo. This path followed the contours of the valley and crossed a couple of snow banks. As we reached Prati di Tivo we crossed beautiful alpine meadows with narcissi and orchids flowering. It felt like a true Heidi moment. 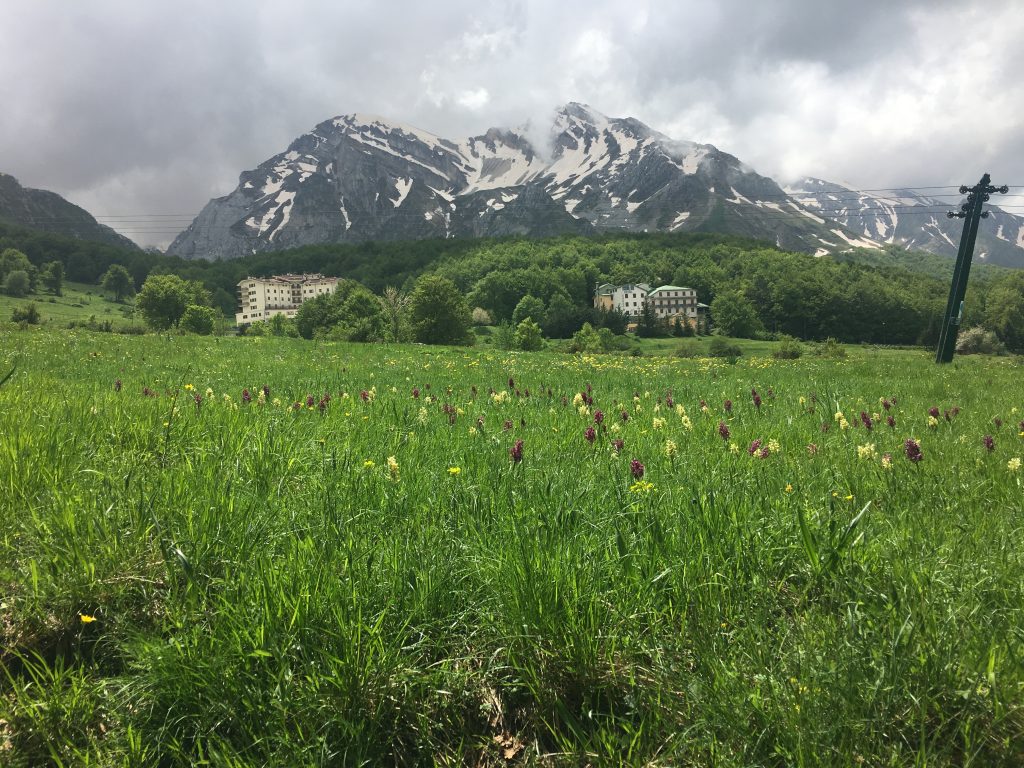 At Prati di Tivo the car park was busy, it took us a moment to realise that there were an astoundingly large number of Porsches and Lancias amongst the cars. Then we realised it was a classic car rally. Paul was particularly taken with the Sierra Cosworth and Peugeot 206 GTIs. It all just looked like a 1980’s carpark to me. 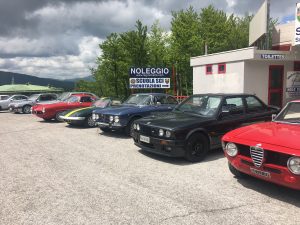 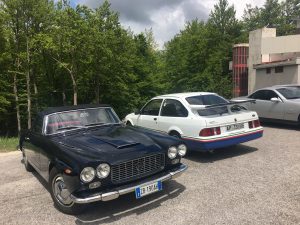 The walk down took us through woods again, and as we approached the village we had to climb over a new landslide, the rocks clean and freshly cleaved from the cliff. We stayed at Pietracamela overnight, watching the bats flit across the sky as the sun set and enjoying the stars in an unusually clear night sky. 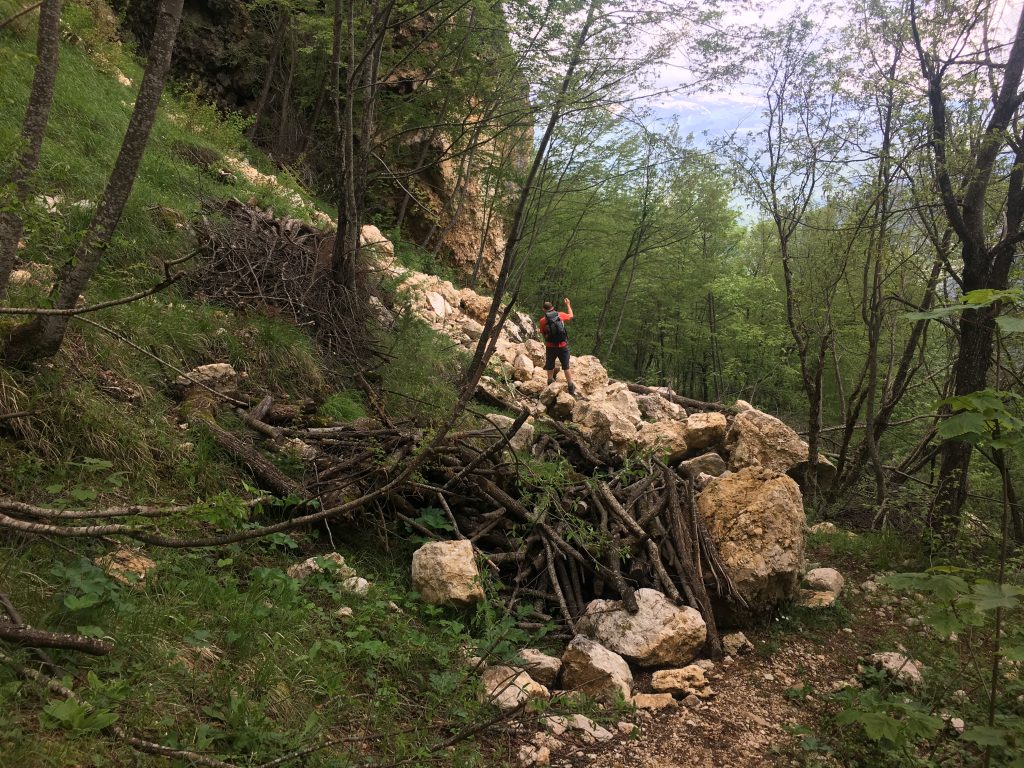