Guidebooks have little to say about L’Aquila at the moment because it is still recovering from the earthquake of 2009. But it felt a little unfair to take it off the tourist map completely; it is the major city for the area and has a number of historic buildings. We wanted to check it out.

It also has two free sostas, we chose the one near the Porta di Napoli where the pitches are in the gaps between trees that are just wide enough apart. Although the pitches are long enough for a large van, reversing in or out with anything over 8m might be tricky. When we looked at the route we wondered if we would fit through the 17th century entrance to the city, but we got through with room to spare.

We turned up in the evening and once I’d convinced Paul that we really did need to park between the trees (he had to look on google street view to convince himself) we settled in for a quiet evening while I researched a route around the tourist sights and possible restaurants for lunch.

So far we had seen no evidence of the earthquake, but we knew that the Porta di Napoli had been one of the first attractions restored. The following morning we set off up to the Basilica di Santa Maria di Collemaggio where restoration has been recently finished. It’s not the first time this church has been restored after an earthquake. The most attractive part of this church is it’s façade which has a distinctive chequered effect. Inside it is calm and austere with the floor echoing the red and cream of the exterior, large columns, frescos and the tombstones of various bishops. There were boards explaining the process of restoration after the earthquake when the side chapels became parted from the nave and parts of the floor had dropped by over a meter. You wouldn’t believe the extent of the damage when you look at it now. 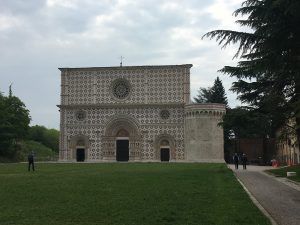 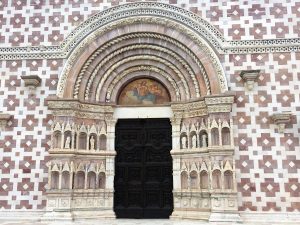 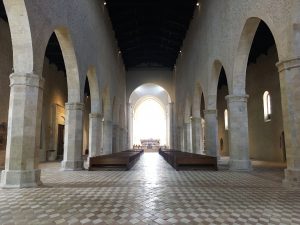 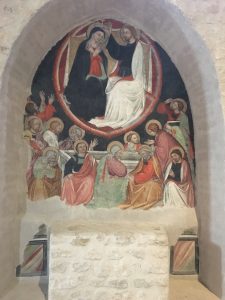 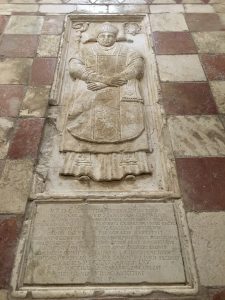 As we walked up into the centre of town we started to see more of the impact, the main tourist sights have been restored, but the rest of the centro storico is a building site. Cranes are the dominant feature and you feel like you should be wearing a hard hat and hi-vis jacket just to walk around. Whole streets are wrapped in scaffold and strapping to hold the buildings together. Looking inside windows and doorways it is evident that major work is still required. The amount of building work that is going on is incredible; they are essentially rebuilding a whole town. I know that there are a lot of opinions about the time it has taken to restore L’Aquila; lawsuits brought against the seismologists, money misappropriated, allegations of poor building quality. Whatever has happened, ignoring the place and taking it off the tourist itineraries isn’t going to help anyone. It is worth visiting for the attractions that are restored, and we found the insight into the physical process of putting a city back together after a major earthquake fascinating. 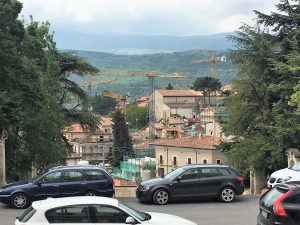 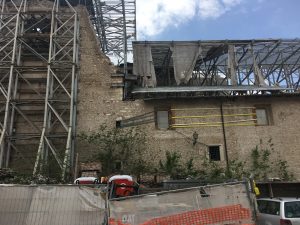 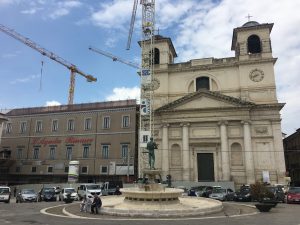 We visited the Basilica di San Bernardino which was in complete contrast to the Collemaggio, it’s style much more baroque and the interior gilded and ornate. Lined up along the nave were the various palanquins from the Easter procession that made an interesting display. I bet the procession was quite spectacular with all of the exhibits lit up. 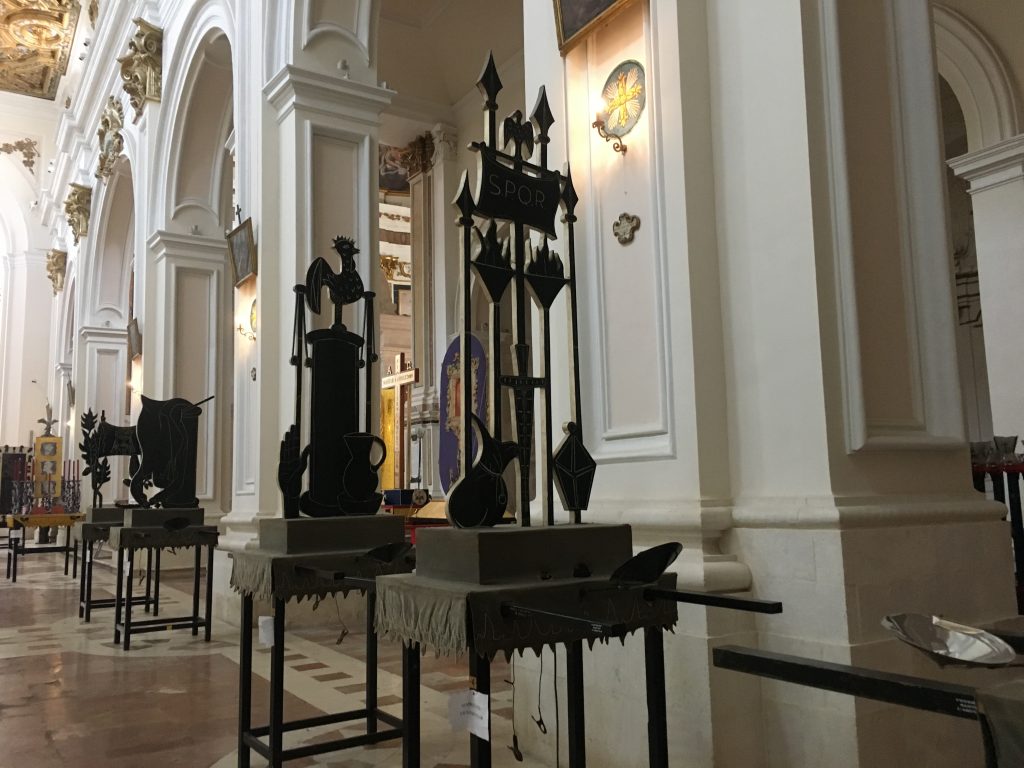 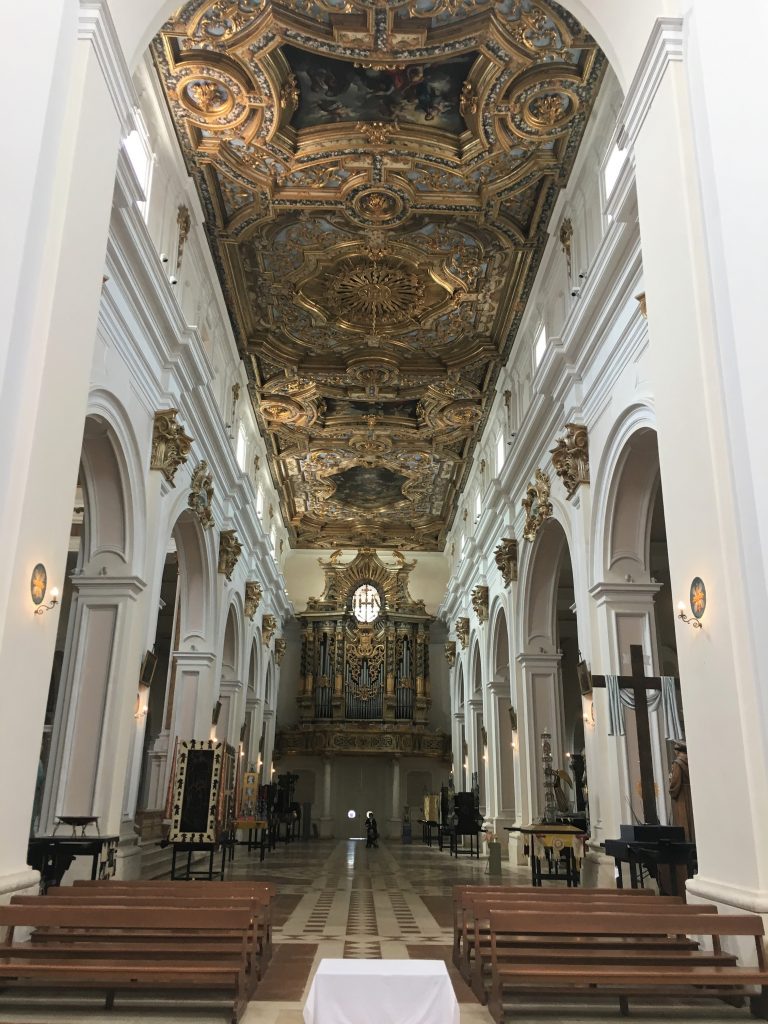 The Spanish Fort was still being restored, so we wandered around the outside before walking back through the town, taking in more sights, looking for the tourist information office and somewhere to have lunch. We didn’t find tourist info, but managed to find a café in the park which was open for lunch. We thought we’d seen everything we were planning to see by this point, but it was only the next day as we were driving away that I realised we hadn’t been to see the Fountain of 99 Spouts. Damn it! 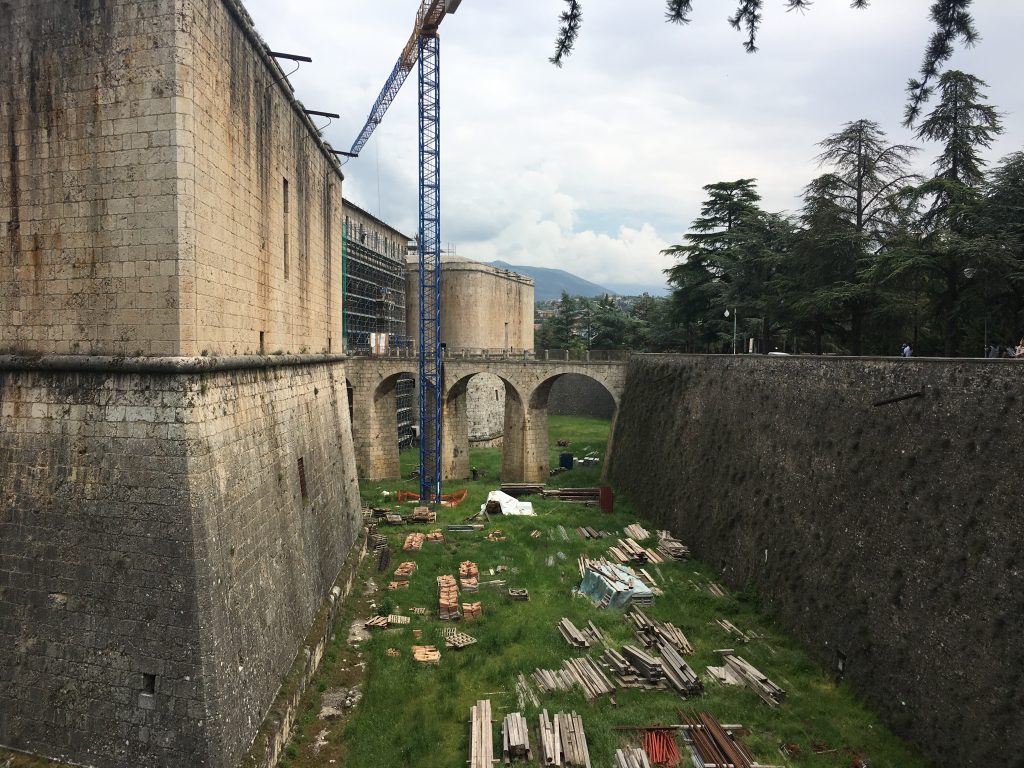