When we were planning our time in the Majella national park we had looked at various maps and options for walking and cycling. Ambitiously we thought we would be summiting at least one of the mountains, even if it wasn’t the highest (Monte Amaro at 2793m). But as we approached the mountains we realised it was unlikely to happen, the weather was still humid and stormy topping up an already reasonable amount of snow on the summits. We turned our attention to alternative walks that wouldn’t go so high but would still provide a bit of a mountain feel.

The Majella (sometimes written as Maiella) mountains are peaks on a wide limestone plateau that looms over the surrounding countryside like a dark wall. Once you are up on the plateau you are already around 1500 meters above sea level, some 1000 meters above most of the surrounding countryside. The steep sides of the plateau have made it relatively inaccessible and a haven for wildlife as well as an excellent area for walking. The villages in the area surround the plateau and only a steep access road to a ski resort provides vehicular access to the higher altitudes. It is possible to get motorhomes up this road, but we didn’t attempt it. We focussed on the gorges formed by the water that has run off the plateau and created deep narrow gouges in it’s sides.

We parked overnight in the national park car park before we walked up this gorge. There is steep parking on the side of the road leading to the visitor centre, but better parking is found by driving past the visitor centre up the dirt track to the start of the walk where there is a reasonably level car park. The only other people we saw here were a Belgian couple in a van conversion who turned up just for the day.

This gorge has one of the most spectacular starts, almost as soon as we started our walk we were in a narrow gap just a couple of meters wide with rock walls looming high overhead. It is said that San Martino elbowed the walls of this canyon apart. Elbows might be an exaggeration but Paul could touch both walls with his fingertips at the narrowest point. 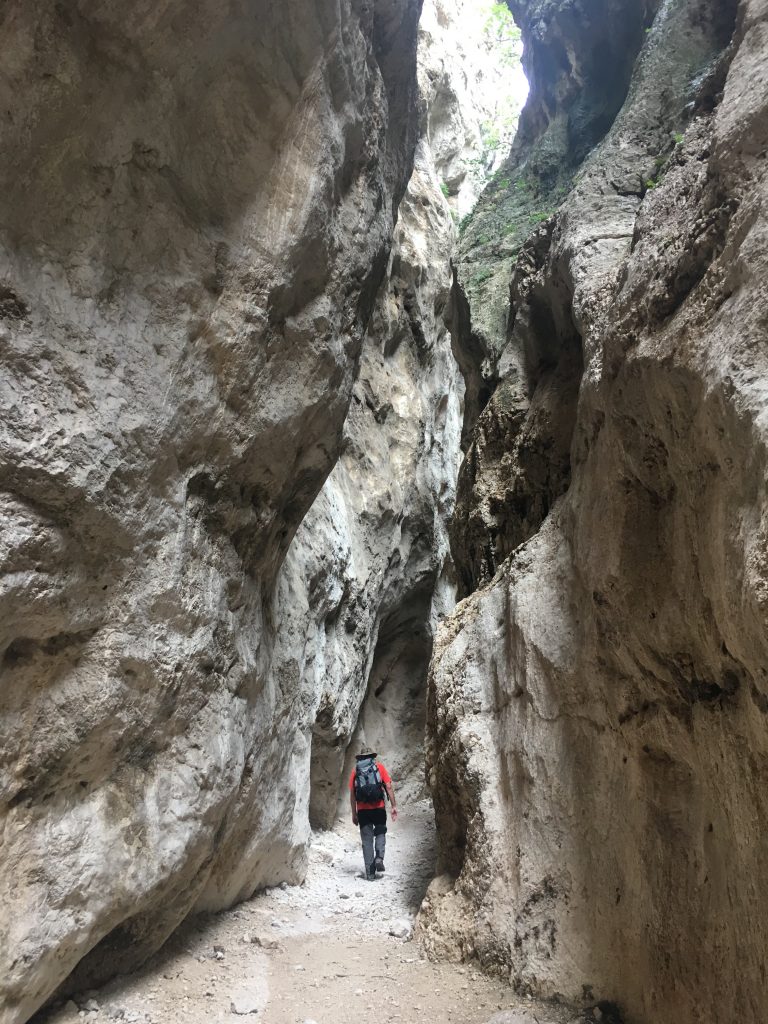 Once through the narrowest part you find the ruined monastery of San Martino in the Valley. In modern times water rarely flows through the gorge, it is all controlled and piped underground (there are a few drinking water springs along the trail), but this monastery was abandoned after being ruined one too many times by flooding. Guided tours of the ruins can be arranged for a fee, but you get a good view from the path. 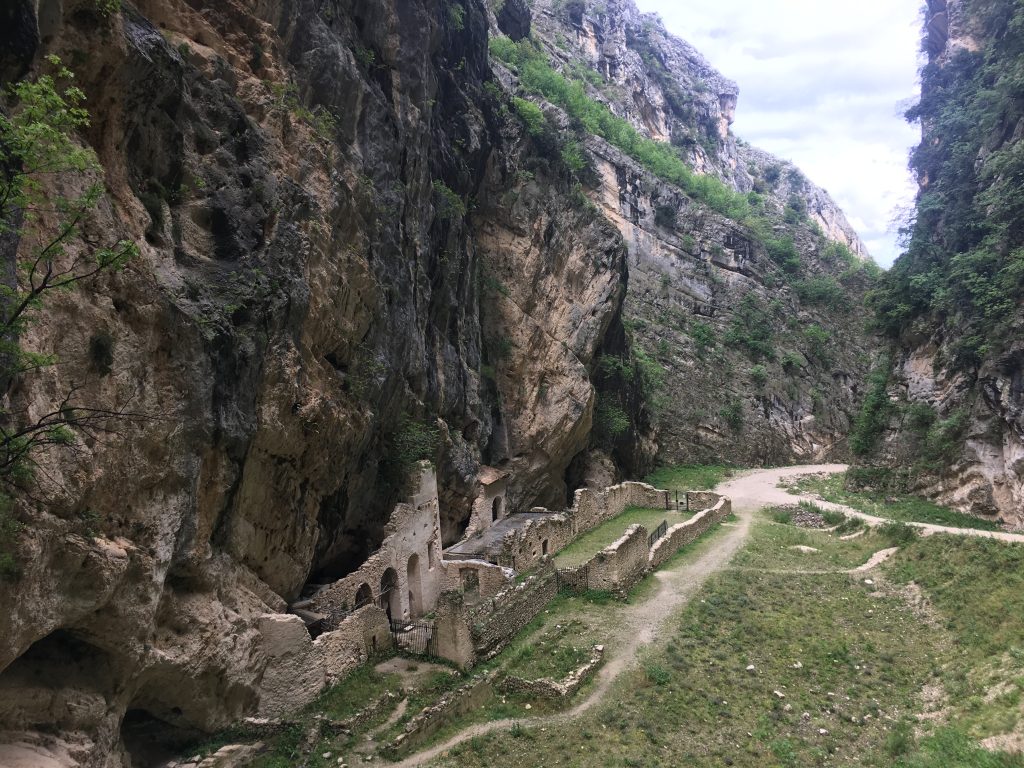 The remains of the monastery

After this you can continue up the gorge as far as you wish to go, the path will eventually take you to Monte Amaro but it would be a significant undertaking, a long long day’s walk or a two day trek with a stop at a mountain hut. The path initially ran through dry riverbed with scrubby plants giving off strong herby scents of thyme and oregano (or maybe marjoram) when we brushed against them. The high rock walls inspired gawping and tripping as we tried to walk and look upwards at the same time. 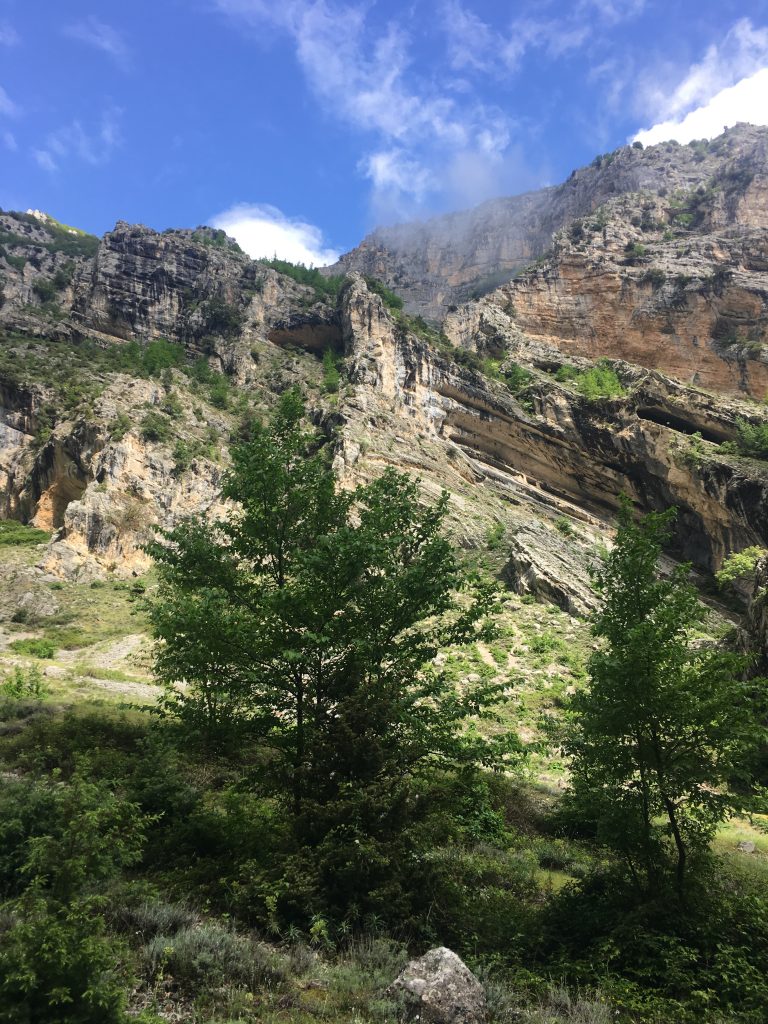 The high walls of the canyon continued for several kilometres, pocked with caves.

As we got higher the walls became less steep and wider apart and the beech forest started, full of bird song but strangely devoid of undergrowth. In the beech forest the path divided by a picnic bench. We took the left hand fork and continued up until we reached the cloud at about 1300m. We hadn’t made it to the top of the plateau but it was still a good amount of ascent and enough for our poor legs that had forgotten what it was like to walk consistently uphill for a couple of hours.

Taranta Peligna is a small town sitting under a split in the rock walls of the Majella. Somewhere up above us was the Grotte Del Cavallone, but the attraction was closed, as was the cable car that can be used to reach it. We were particularly disappointed that the cable car was not running because it’s open one-man baskets looked like a thrilling way to travel up the gorge. I’ll admit now that we didn’t walk up this gorge, even though there is a path/steps, the weather was incredibly wet and our muscles were aching from our previous day’s walk. Instead we cycled away from the gorge, up the hills to the east of the village where we got better views. Our round trip route, planned on google maps, was cut short due to a road that was washed away. In the evening we walked up to the tiny Santuario Madonna della Valle; the sonorous voice of the priest could be heard as we walked up the streets towards the church, we were unsure if it was natural acoustics or electrical amplification. 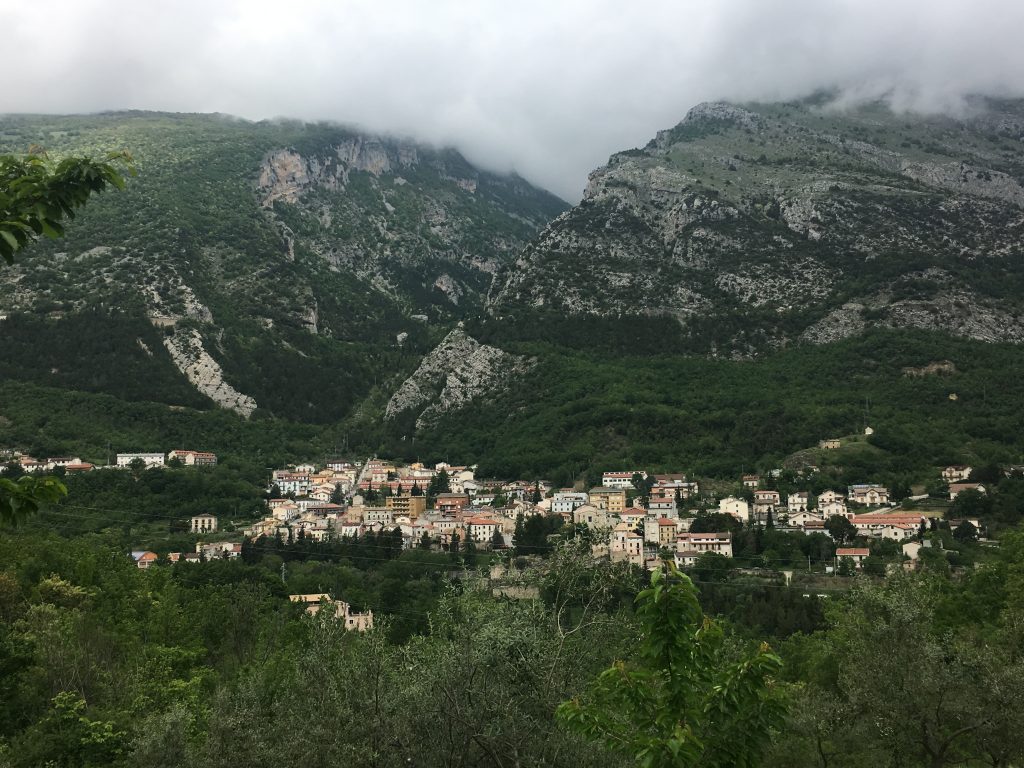 The town of Taranta Peligna from our bike ride, behind you can see the gorge we didn’t walk up

We stayed in a well equipped but overgrown sosta in Taranta Peligna, on the notice board at the entrance it told us to ring a number on arrival, but where the number should have been was a blank space. We waited for someone to turn up and take our money but no-one arrived. Like many out of season locations in Italy I assume they just don’t care until summer when I hope they strim the pitches and de-infest the bathrooms before they start charging. The bathrooms were open and we turned on the hot water heater and had the luxury of showers, luckily neither of us are worried by critters, Paul even found a scorpion in his shower tray. 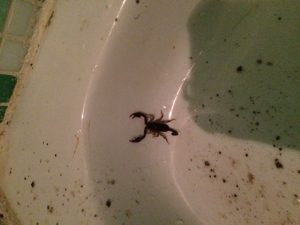 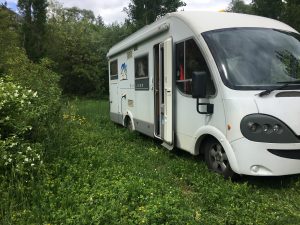 Bertie gets a tummy tickle from the deep grass

Next stop was Caramanico Terme, a spa town on the north west side of the massif. When we hit a closed road our journey changed from 50ish to over 100 km, but at least our detour took us onto better roads. In Caramanico Terme we stopped in the car parking at the bottom of the hilly town. There is a lift at the back of the car park which allows people to avoid the steep hill to the main street, but by this time our legs were back to normal and probably a bit better at hills. 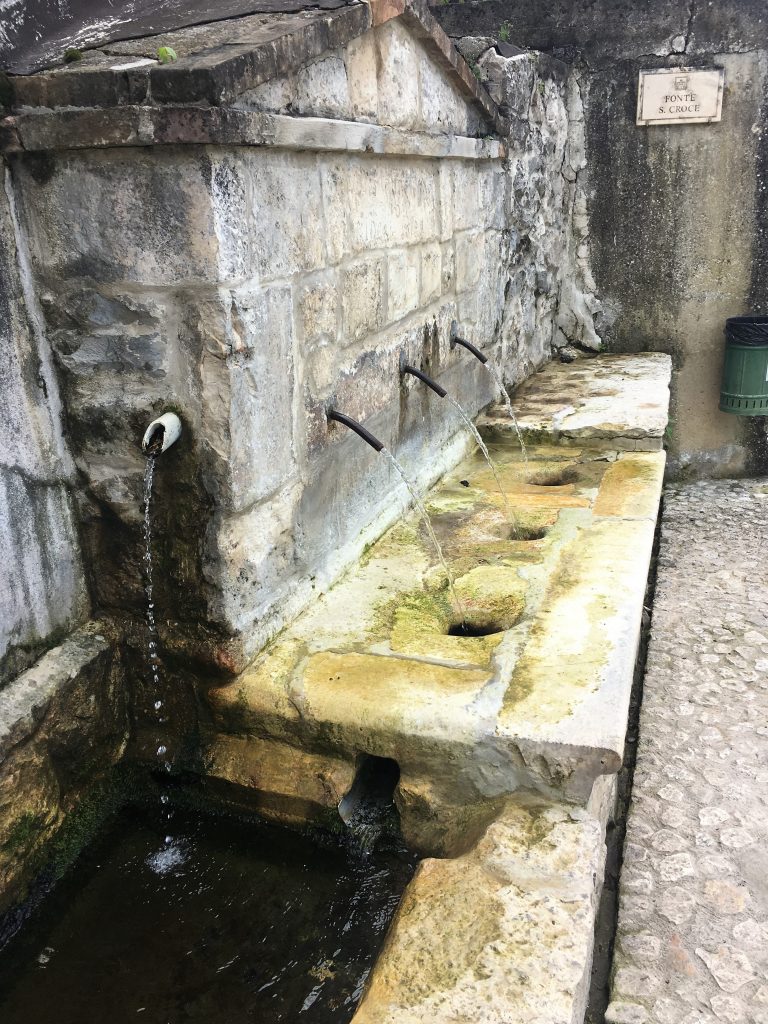 We had a quick shop for lunch items in the town bakeries and popped to the national park office to pick up our walking permit. These permits are free, but you have to take an ID document and register your intended route before you walk, then you are issued with a copy of the permit to carry with you. In theory you could be asked for it, but I cant imagine that it happens very often. The national park office here was really useful and stocked with maps and books, I think I would start in this town if I was visiting  the Majella again. 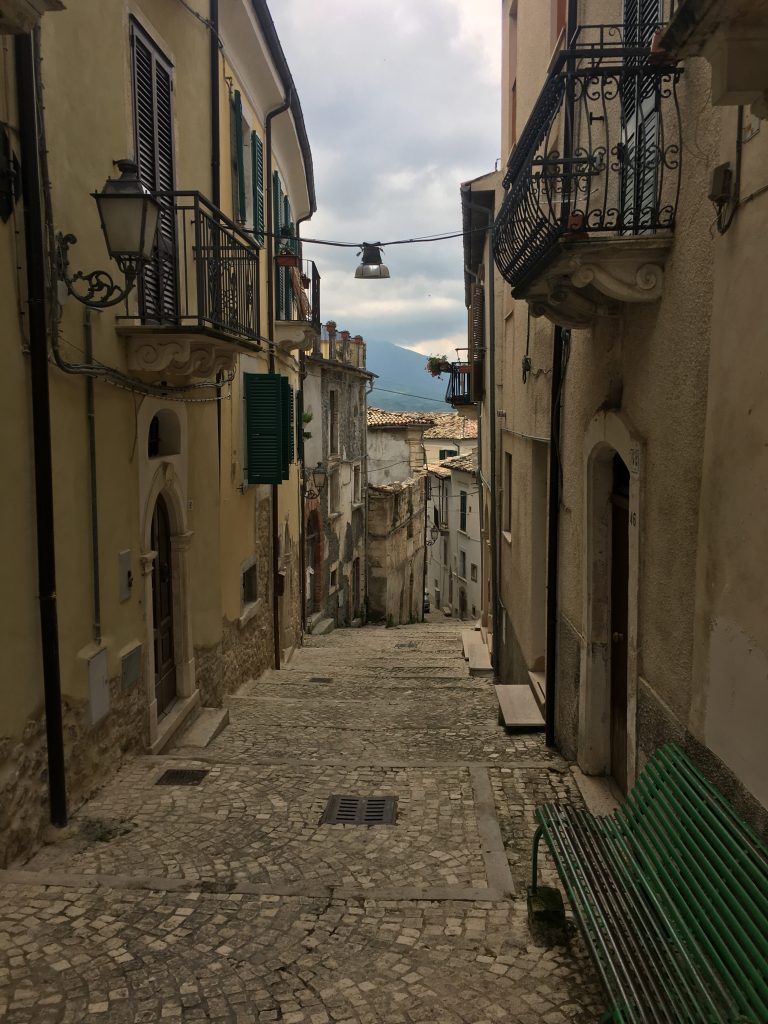 Streets of the old town, our sat nav tried to bring us up through these streets – luckily it was pretty obvious that we were heading the wrong way.

This was another walk up a gorge but of a completely different nature than our first one. For a start there is a river running noisily through the valley, it was slightly opaque, sulphurous and gave off a misty vapour. The overhanging mossy greenery gave it a mysterious and prehistoric feel. We started our walk by descending to the Ponte di Caramanico where a signposted path took us down steps to the bank of the river, it criss-crossed the river several times giving ample opportunity for photos. 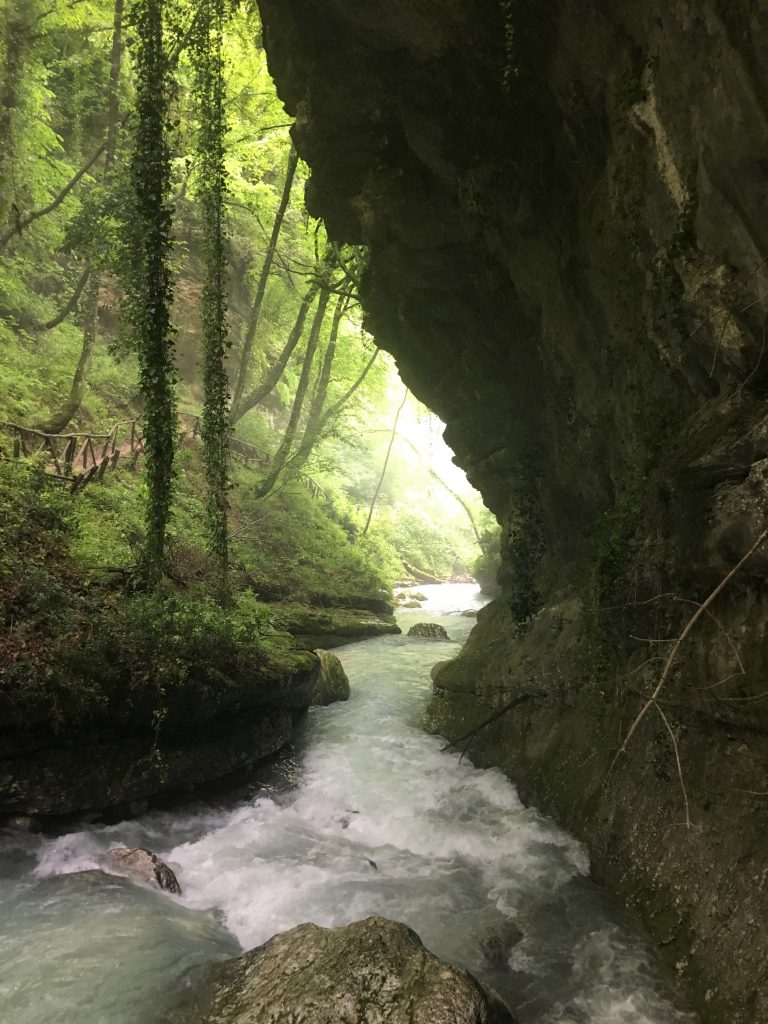 Then we continued along the bank, following the ‘Spirit’ path, one of the three long distance paths across the park. Our registered route was to cross the bridge at the Ponte del Vallone and return along the other side of the river, which we did eventually, but first we continued on a little further – shh don’t tell anyone! 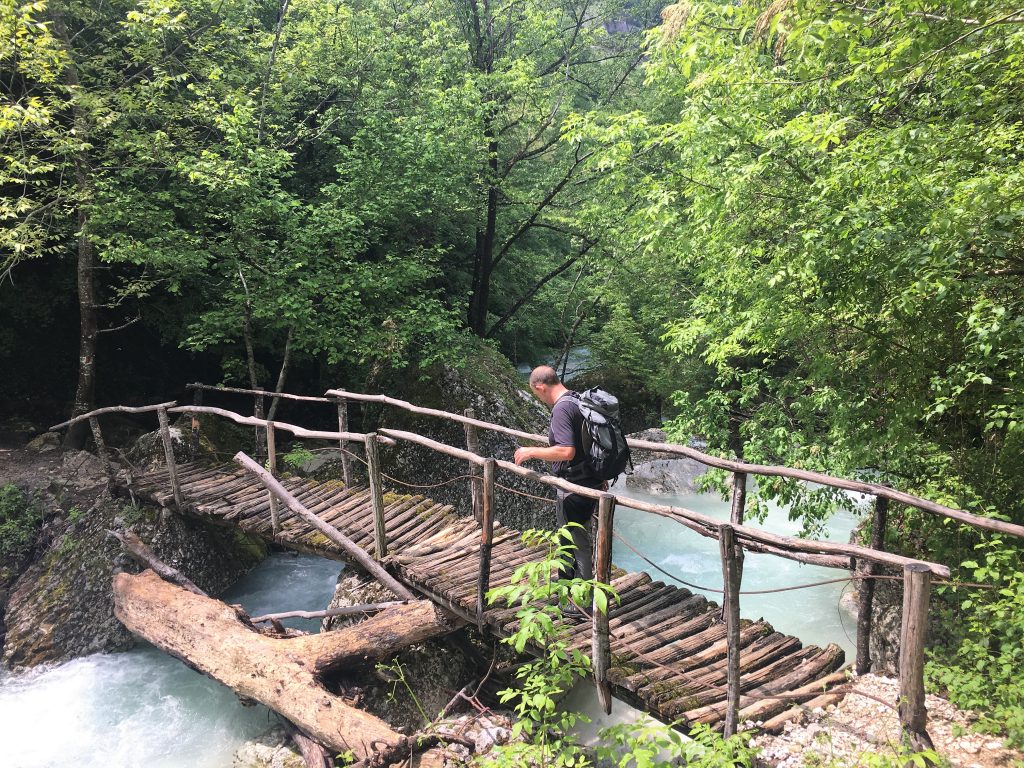 The bridge was more sturdy than it may appear – honest!

After crossing the bridge the path took us high up the other side of the valley, giving us a completely different perspective. We enjoyed the longer views across to deer tracked scree and rocky cliffs and caves. As we walked back along this trail, which took us back into the top end of the town, we bumped into a group from Devon who were on a walking holiday. It’s a small world! We had a conversation with them and like starving people presented with a feast we may have enjoyed our English conversation far too much. I bet they were happy to get away! 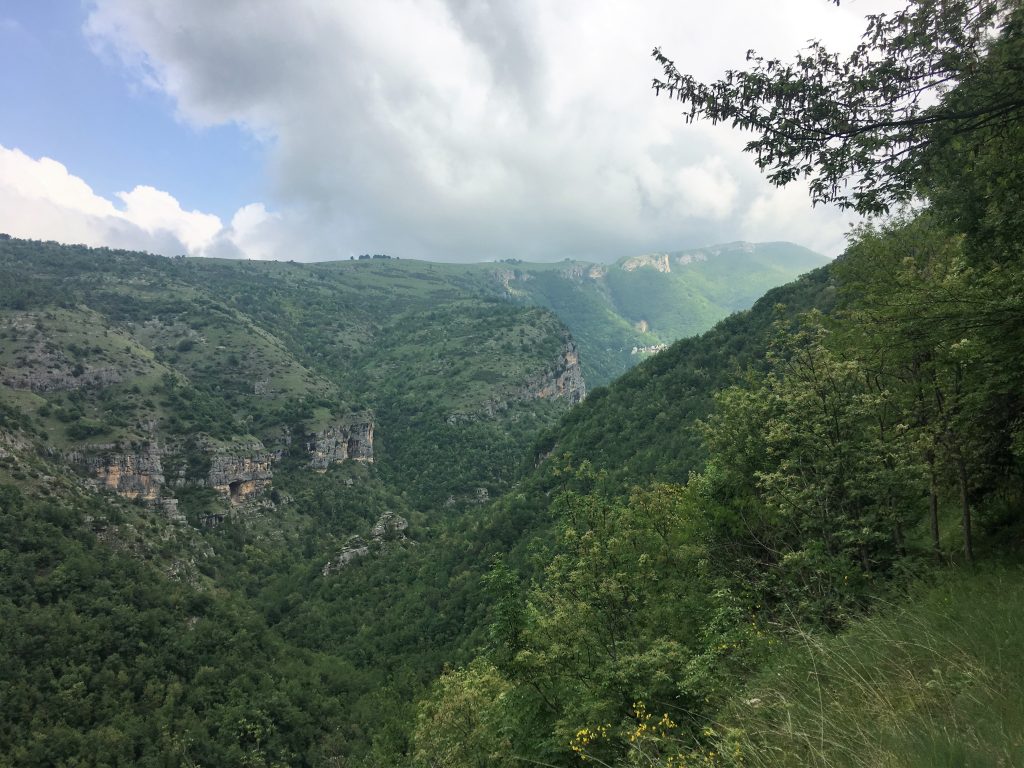 Looking down from the high path

Finding a collection of walks whose start points had car parks that were easily accessible by motorhome makes this area really attractive to us. One day we’ll come back for a late summer assault on the higher peaks.