We made our way from L’Aquila up through the foothills of the Gran Sasso national park, climbing up on the major road (A24) that chugged almost imperceptibly uphill and through tunnels to the village of Assergi. Ahead of us the crystal white peaks of the mountains peeped out from the green forested hills. We knew we wouldn’t get to the top of these alpine mountains without proper winter equipment so we were heading for a base slightly lower down where we could enjoy some mountain walking with limited ice and snow.

Our parking spot was a large carpark built to service the traffic on the gondola that takes people up from Fonte Cerreto to Campo Imperatore. A large, flat and almost empty car park with grand views of the valley below – it was perfect. We checked out the gondola, expecting it to be shut in May as per the website, but it was running. Very few people were using it, but we soon found out that they were expecting to ferry several thousand people up to watch the end of stage 9 of the Giro d’Italia on 13th, something that took us a little by surprise, was it that time of year already?. 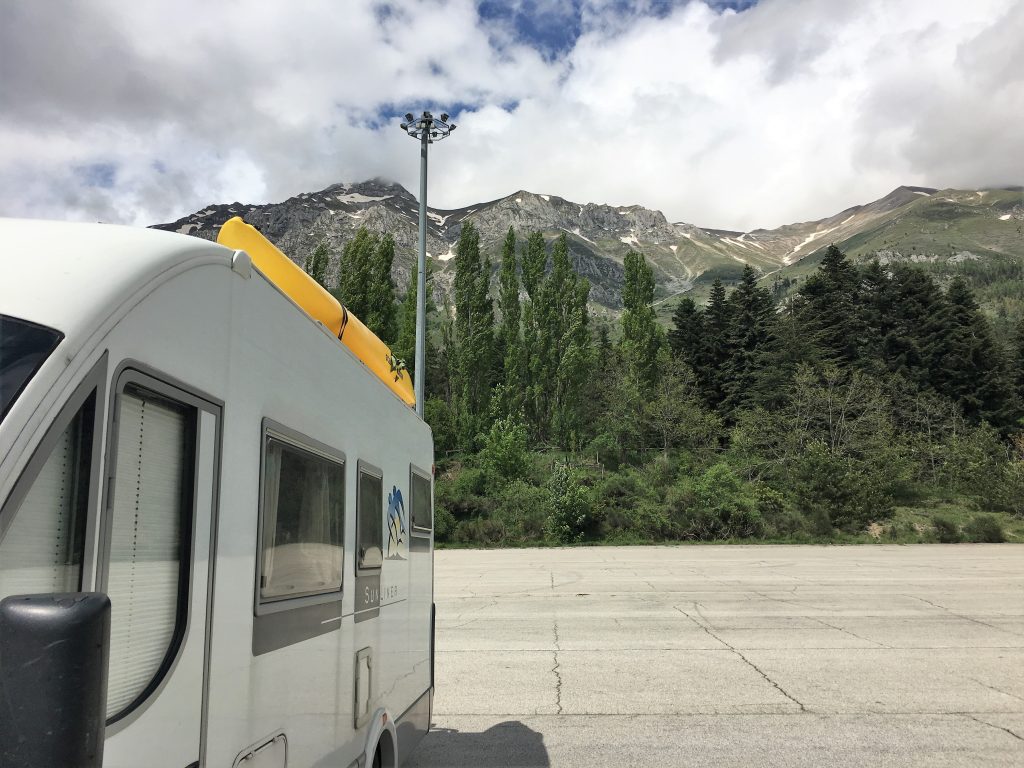 Parked up at Fonte Cerreto

On our first day here we went for a bike ride along a route that was recommended on the national park website. Probably our favourite mountain biking route in Italy so far, it took us up the valley from Assergi following a well marked and wide track gradually uphill to the village of San Pietro. From here we followed the road even further uphill past springs, troughs and herds of cows until we could take a steep downhill track to Vasto. Once down to the river we followed fun and easy single track below limestone cliffs and caves before eventually meeting another track just before Assergi. We had to ford the river four times, using our bike to steady us as we tried to find the stepping stones that were mostly submerged in the spring melt waters. By the time we got back we had wet feet but we’d had a lot of fun. 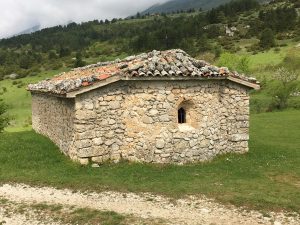 Rocks holding down the roof tiles 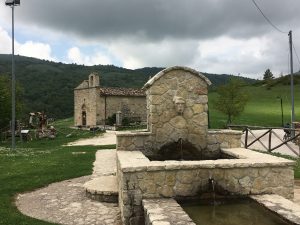 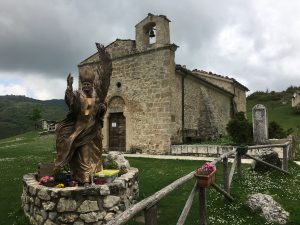 We took a quick detour into the cobbled streets of Assergi to try and find some tourist information. We found an ‘information point’ i.e. a carousel with lots of useless leaflets in it, but I was sure there must be more. Only once I’d walked into a random office did I realise that the carousel was it. The lady in the office helpfully pointed me in the direction of a local hotel (Hotel Giampy) who had an English speaking receptionist and more books and maps for walking than we have seen for a while. I was in my element and could have spent a fortune, but limited myself to a map and a guidebook.

Using the guidebook and map we planned another walk from Fonte Cerreto. This time we climbed up a marked track (CAI red and white markings) through woodland to the west of the gondola, taking multiple zig-zags as we got higher and higher and eventually cleared the tree line. Above the trees we started to spot alpine plants, violas and orchids, both in yellow and purple, were the flowers we could identify. Small patches of snow lay in gullies but didn’t impact the path as we traversed along animal tracks to pick up another CAI path down under the line of the gondola. On the downward path we had great views into the valley where we could occasionally make out our car park far below us. At one of the gondola supports, where red paint was splattered on the surrounding rocks and vegetation (it must have been a windy day when they painted), we mistakenly dropped into the gully rather than sticking to the ridge, the gully was uncomfortable walking over large stones and avalanche debris and we tracked back up to the ridge as soon as possible.

It felt odd to be walking in the mountains without reaching a summit, but summiting seems to be a peculiarly British obsession that we need to get over. With over 800m of ascent and some spectacular scenery and flora it was still a good mountain walk. 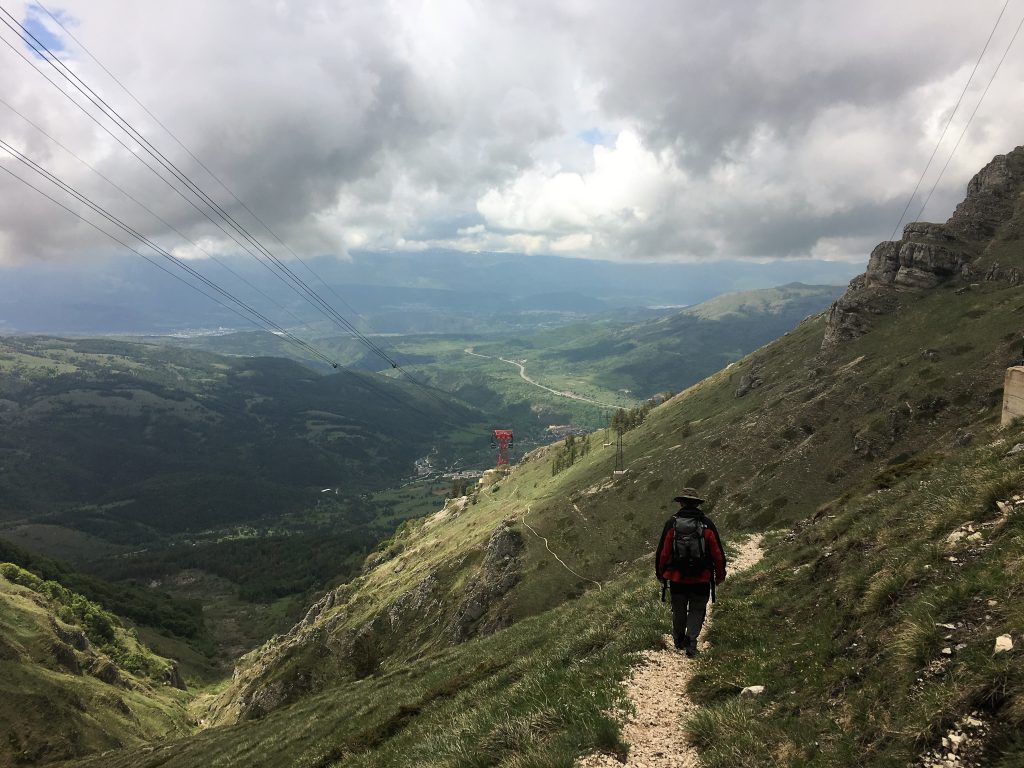 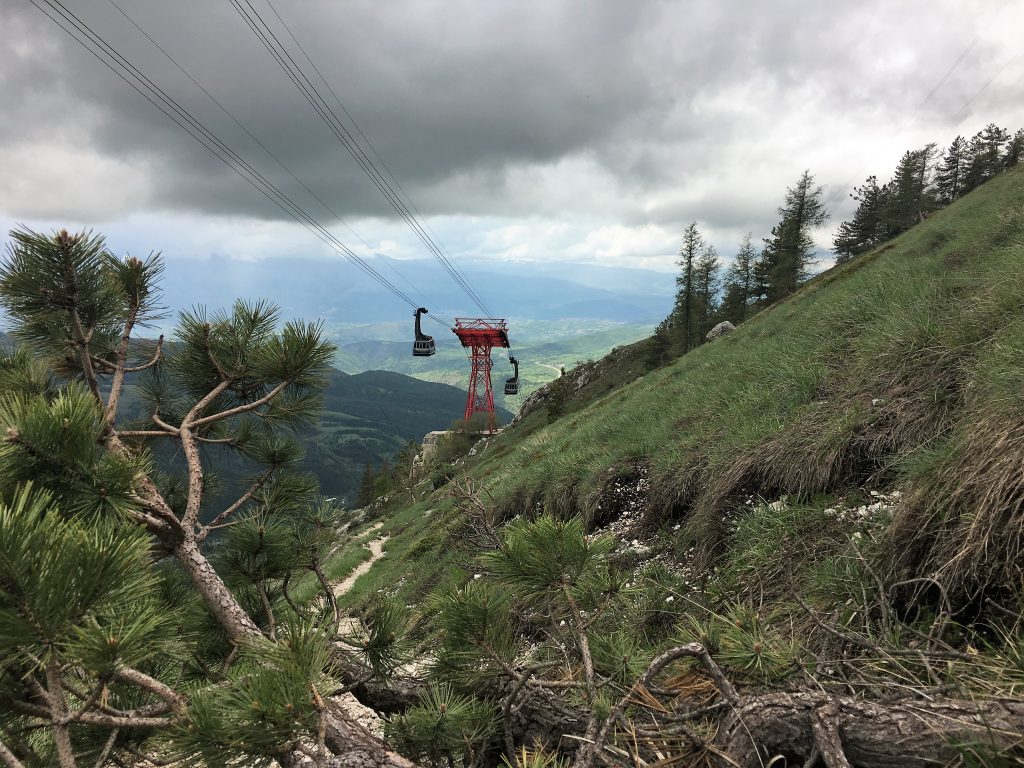 Watching the gondola go past

When we returned from our walk there were signs erected in the carpark forbidding parking all weekend. The Giro d’Italia had reserved the space for press and other support staff. We wondered how the ordinary supporters were going to get to the gondola, presumably they would have to park even further downhill and get the bus to Fonte Ceretto before getting the gondola up, then they would have to slowly be ferried back down at the end of the evening. You would have to be a pretty hardcore cycling fan to contemplate being the last person in that queue. 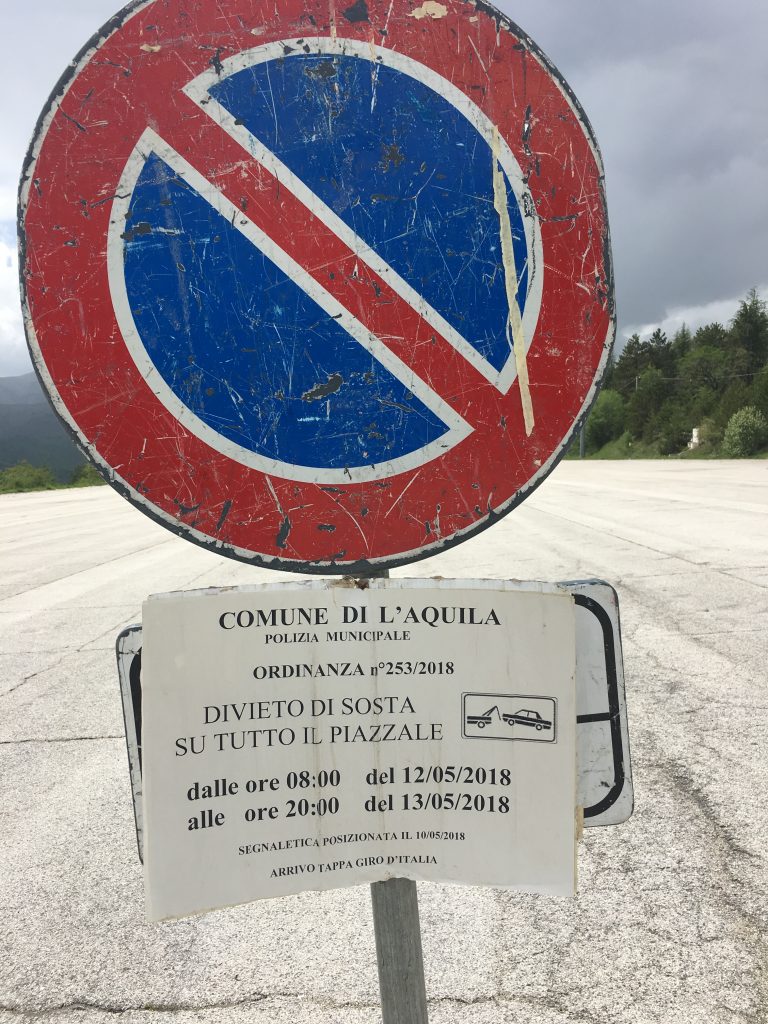