We didn’t intend to spend much time in the Algarve, but we wanted to see the rock formations of the Algarve cliffs somewhere and Lagos seemed as good a place as anywhere.

We stopped off at the Intermarche supermarket on the approach to Lagos and here we got an indication that there may be a few British people around. As well as hearing a lot of English spoken we were also able to get our hands on some British produce. Blackcurrant squash was number one on the list for us.

We parked up at Praia de Porto de Mos on the western side of Lagos where there is a large dirt car park behind the beach and from here we walked along the coast towards the Faro. Or at least we tried to. There is a lot of development right up to the coast and it was difficult to find a coastal path on the way out. We ended up walking up residential streets trying to find a way through to the coast with no luck, and eventually walked through a hotel complex, climbing through a hole in the fence around their golf course before we were able to get onto the headland. On the way back it was much easier to find the coast path, we had just picked the wrong street, and we only had to leave the coast for the last part of the descent back to Bertie. 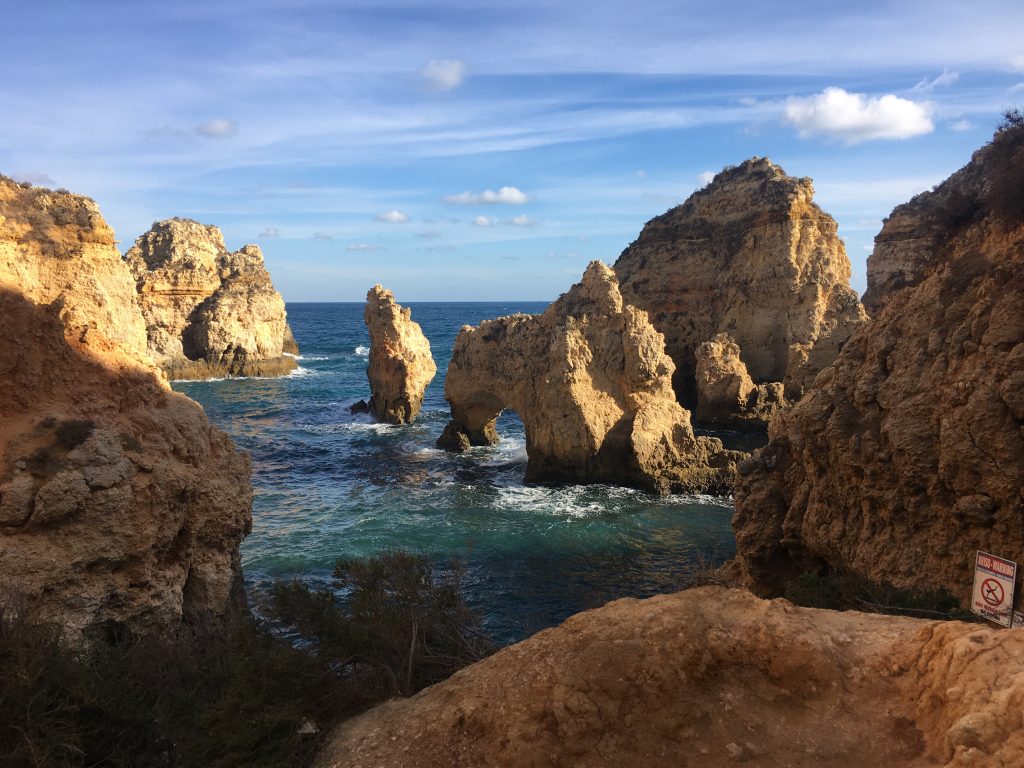 The cliffs around the headland of Ponta de Piedade were spectacular, worth exploring with lots of paths and stairs winding around cliffs, arches and grottoes. There were plenty of people there, including a rapper (grime artist?) making a video to the backdrop of the golden arches.

The campsite we arrived on gave us a taste of the life of the people who stay on campsites long term. We were amazed by the shanty style dwellings that had been erected by some of the residents. In some cases you couldn’t see the caravan or motorhome, they were covered with shelters and surrounded by windbreaks and awnings. Even fences and gates had been erected. The social life of the campsite took place at lunch time – making the most of the daylight hours – we saw people joining each other for lunch, going out for a walk or just stopping to exchange greetings. By evening it was a different matter, the campsite was deathly quiet. We went into Armarcao de Pera to have dinner one evening, when we got back we thought we’d crossed into a parallel world inhabited by shuffling, dressing-gown-wearing, zombies.