Well…one of them anyway.

Our parking spot was at Cabo São Vicente, the south-west corner of Europe near the town of Sagres. We had emptied and refilled Bertie at the Intermarche supermarket in Sagres before finding a parking spot.

When we arrived on the evening of the 4th we parked up with views of the sunset which was spreading rose and amber colours across the sky. I was so caught up in watching the colours that I forgot to take a photo. Oh well, it’s sometimes nice to just enjoy something without thinking ‘I must take a photo for the blog’.

The following morning we set off to walk along the coast, the cliffs here are spectacularly high and the wind swirled around them, carrying sea birds, pigeons and falcons in swooping curves above and below us. As usual there were fishermen dropping their lines from high vantage points into the sea below. We rock hopped amidst the scrubland between the top of the cliffs and the road, heading west and skirting around a couple of military installations until we hit private property just before Praia de Tonel that would have forced us inland. Instead we decided to turn around and back to Bertie. We dropped down to the Praia de Beliche for a spot of lunch and a paddle – enjoying the sunshine and sheltered from the wind by the high cliffs – before making our way back by a more direct route parallel with the road. 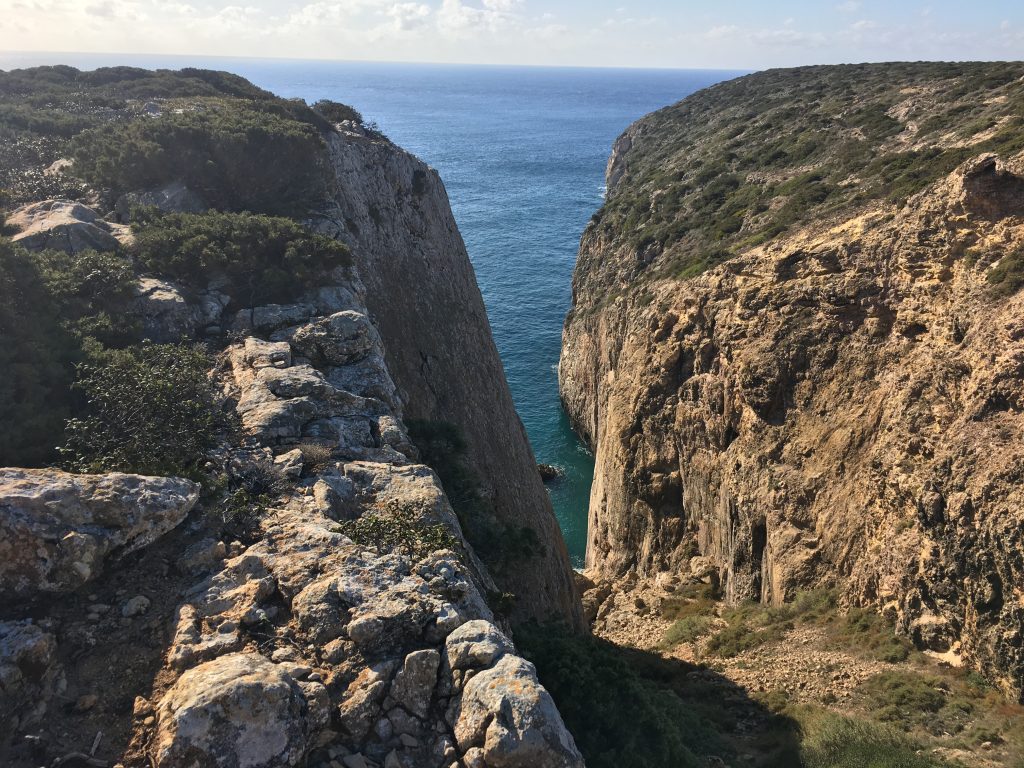 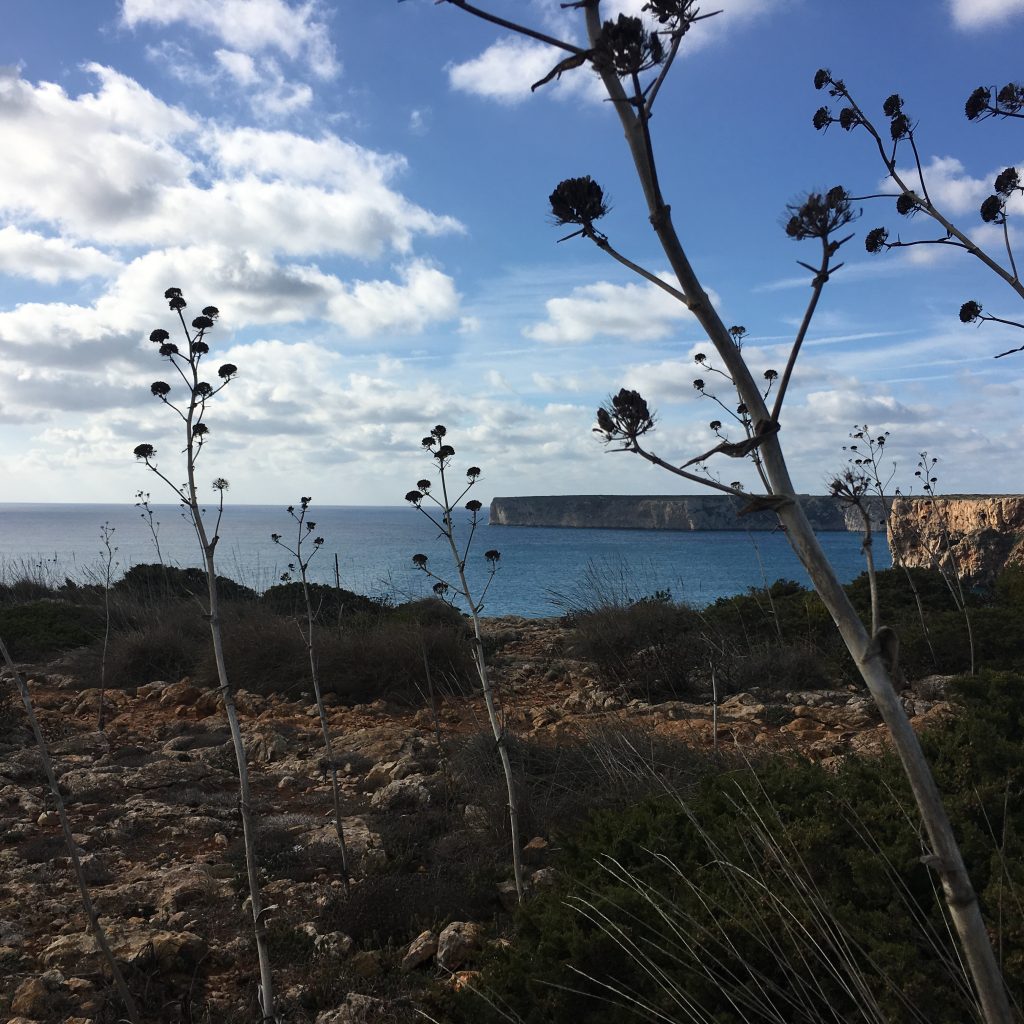 Flower heads on the clifftops

That evening we moved a little further along the coast to the Praia de Boca do Rio. On first sight this seemed like a run down place with an abandoned graffiti covered building between the car park and the sea and a very small beach at high tide. But ignoring the building the car park was set in an attractive river valley nature reserve and also has some roman ruins. At low tide much more beach was exposed. We stayed for the night even though there were signs forbidding overnight parking, I think they probably don’t bother enforcing this in low season. We didn’t stay for long the next morning just took a short walk to the top of the cliffs before we left. 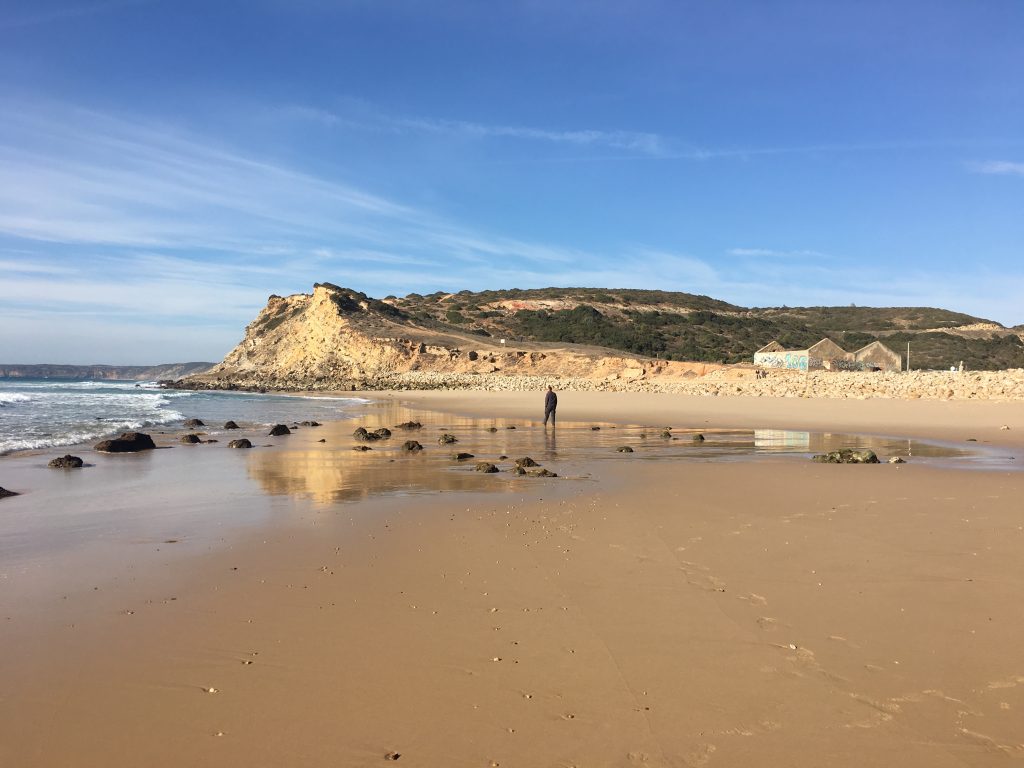 Beach at Boca do Rio, beautiful despite the abandoned, graffiti covered, building