We left Les Angles behind and continued south and east along the N116. This road is wide and well constructed and makes sickening large swooping turns. The tables were turned from our gorge drive a couple of days ago. Paul was thoroughly enjoying himself on the wide bends whereas I was holding on tight on the turns and unable to do anything but look ahead. The road follows the valley of the river ‘La Têt’ as does the rail line for the well known Train Jaune, a canary yellow tourist train that runs up the valley and has open topped carriages in the warmer months. In the earlier stages the road is high above the river and the rail line can be seen below, further downhill the train crosses on viaducts above the road.

We had considered a number of places along here to stop. The area is peppered with forts, built during the period when the area was hotly contested borderland. We drove past the citadel at Mont-Louis in two minds whether to stop, but the weather was forecast to be cold and we decided to go a little lower for the opportunity to have a warmer night’s sleep.

We decided that the motorhome parking at Thues-entre-Valls would be our destination, on the map we could see a few options for walking routes and the parking had good reviews. We indicated to turn right and immediately saw a sign for a 3.5 tonne limit on the bridge, so Paul pulled back out before committing to turning and we continued a couple of hundred meters to the parking area on the main road. A discussion ensued, should we stay parked on the side of the road, ignore the weight limit or proceed onwards to another parking spot. In the end we decided to ignore the weight limit, whether we were sensible to do so I don’t know but we had observed a couple of weighty trucks driving across the bridge while we were deliberating.

The drive to the parking was a test of our nerve, across the bridge with the weight limit and then steeply up through the village, following the signs for parking through narrowish streets. We didn’t meet anyone coming in the opposite direction and our short drive finally rewarded us with the entrance to the car park and clear signage for the motorhome parking. The parking here has services and is €9 for the first 24 hours and €5 for each subsequent 24 hours, you take a ticket on entry and then have to pay at the machine (cash only) before leaving. We parked up in the level motorhome area under chestnut trees and breathed a sigh of relief, we’d made it! 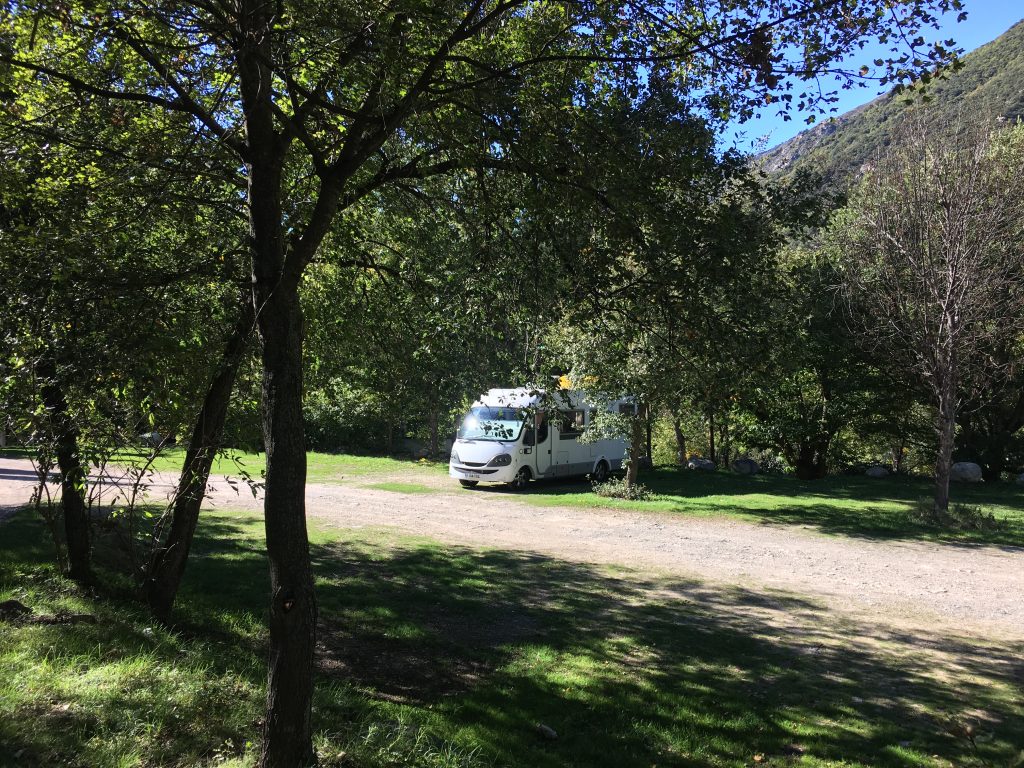 Parked in dappled shade under the chestnut trees

By this time it was only early afternoon, but the sunny weather and sheltered position tempted us to relax outside the van rather than do anything energetic. We watched the yellow train go past a couple of times, full of holiday makers enjoying the scenery and waving from the windows. The train stops here (on request) and is another good reason for choosing this parking spot if you aren’t inclined to long walks. When we got bored we collected fat ripe chestnuts and took a wander down to the notice boards and café/kiosk to see what walks we fancied doing. We even got the BBQ out for a change although by tea time it was cooling down rapidly and so we ate inside.

The following morning we set out to walk the Carança gorge. We knew this walk was going to be exciting and exposed because of the many warning signs at the entrance to the gorge. Little did we realise just how exciting it would be and that we were at the start of one of our favourite walks in the French Pyrenees. 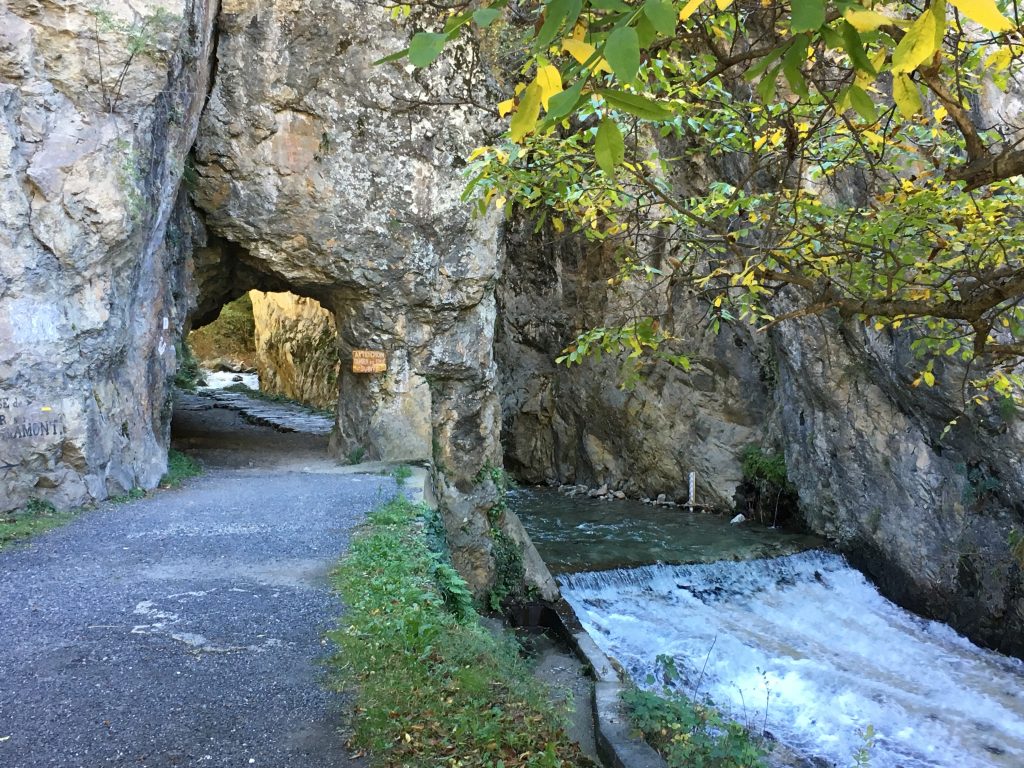 The entrance to the gorge is through an archway carved through the rock under the railway line and next to the river. The path starts quite gently, a part concrete and part rock path alongside the gorge leading to a concrete bridge where you can cross and walk up the other side of the gorge, up into the hills, or back via a hilly route to the car park. We were not crossing the bridge but continuing onwards, staying on the same side of the river and following the path as it tracked uphill becoming more rocky and exposed and then back downhill again to rejoin the river. Along the way we could see the path along the other side of the gorge, a corniche dug into the rock and realised that we were going to miss out on this spectacular section of the walk. If you are going to do the long loop like we did, I would recommend crossing the river at the first concrete bridge and proceeding along the corniche for maximum excitement, rather than the Roc de Madrieu route. 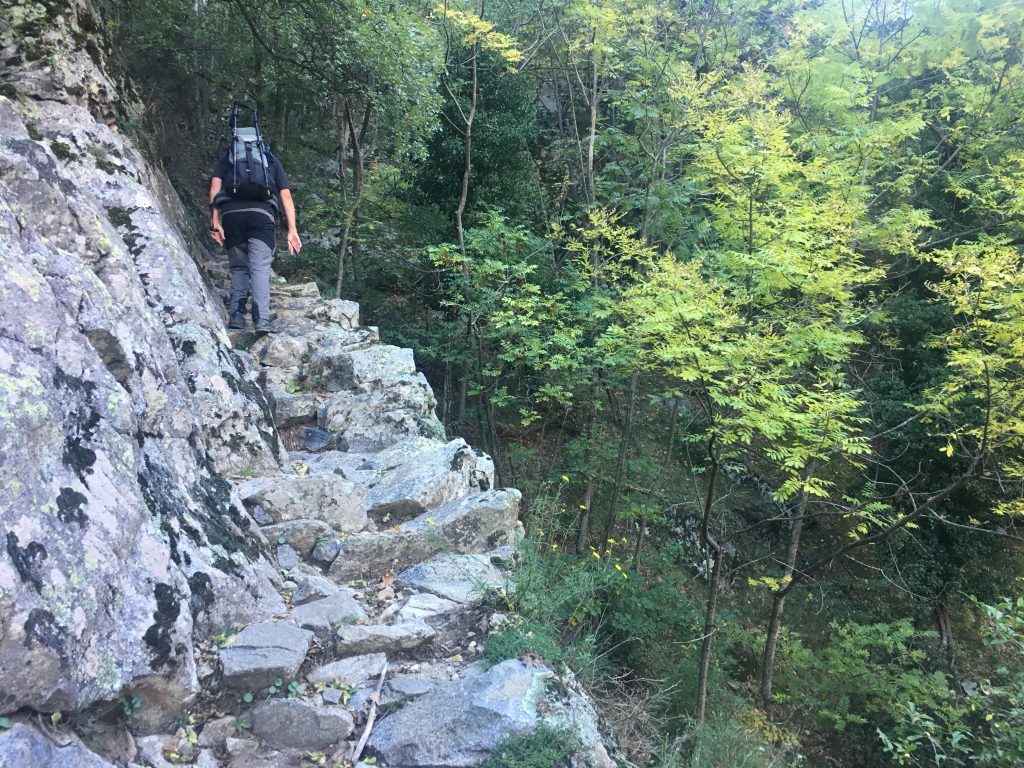 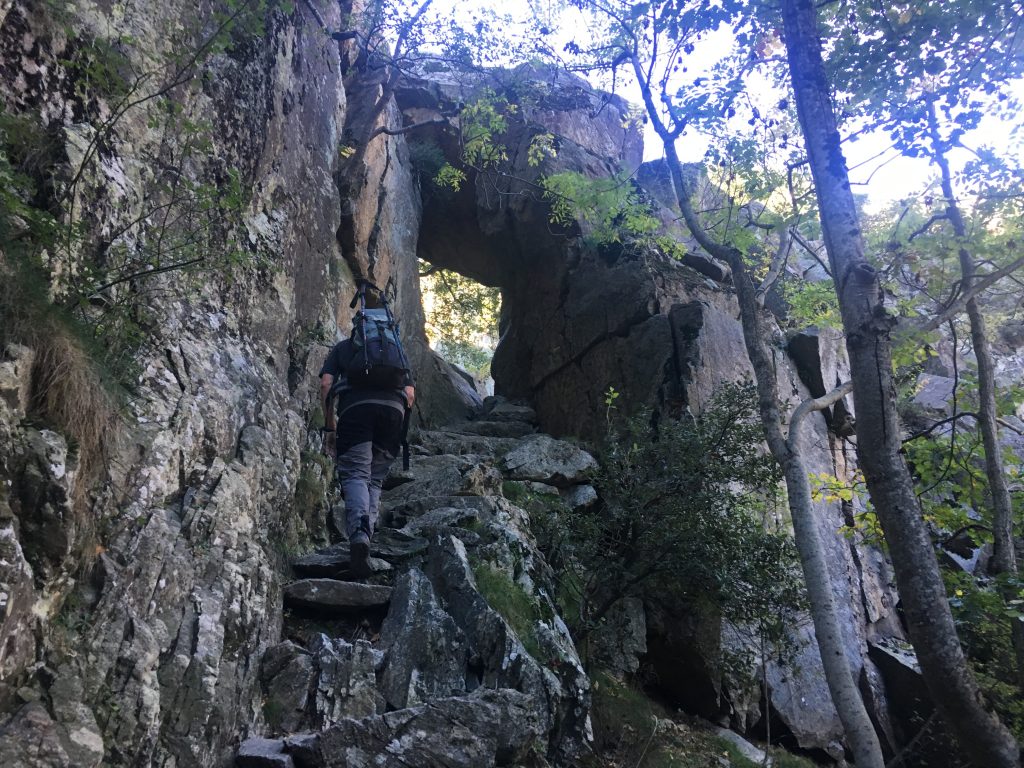 Pathway cut through the rocks 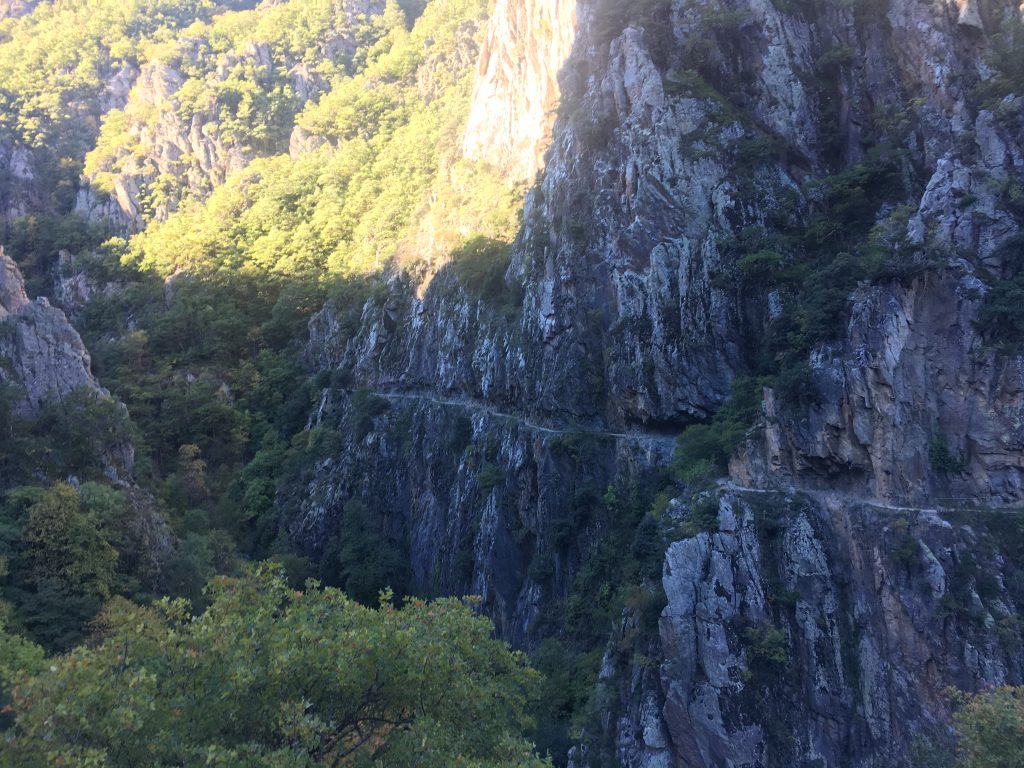 The corniche on the opposite side of the gorge

We reached the next bridge across the gorge about an hour from the start, this was a metal walkway with a single rope hand rail. It wasn’t that exposed but it was a taste of things to come. This is also the point at which we could have done the shorter 8km loop, by crossing this bridge and turning right we would have found the route back along the corniche to the concrete bridge and our start point.

But we weren’t heading back, we were pressing on across the bridge and further into the gorge. The path now followed the river closely, moving from one side to the other and using a selection of suspension bridges, walkways and ladders to navigate the sheer sides of the gorge. At every point there was at least a single rope handrail – the suspension bridges were very wobbly but at least had handrails on each side to help keep your balance. I let my darling husband go first across most of these obstacles as he had a habit of shaking the bridges if I went first! On the map this path was marked as ‘Sentier sur passerelles’ which interpreted as trail on gateways – I suppose the walkways were a bit like gates, laid on their sides and attached to sheer rock faces. At least I will know what this really means if I encounter it again. 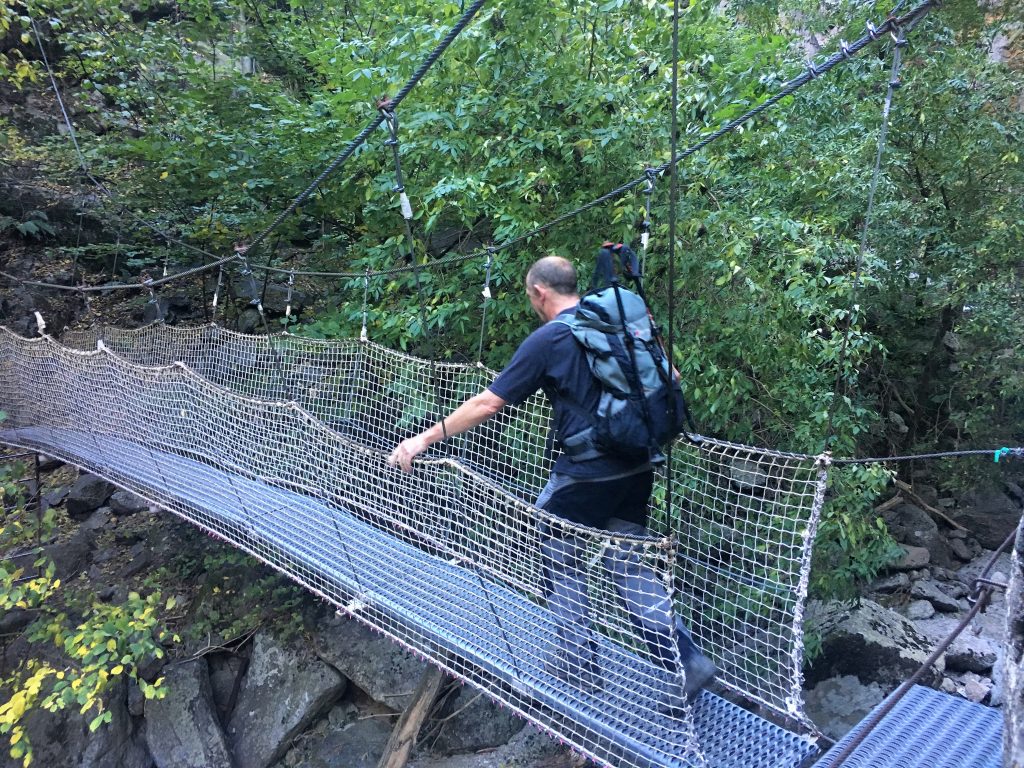 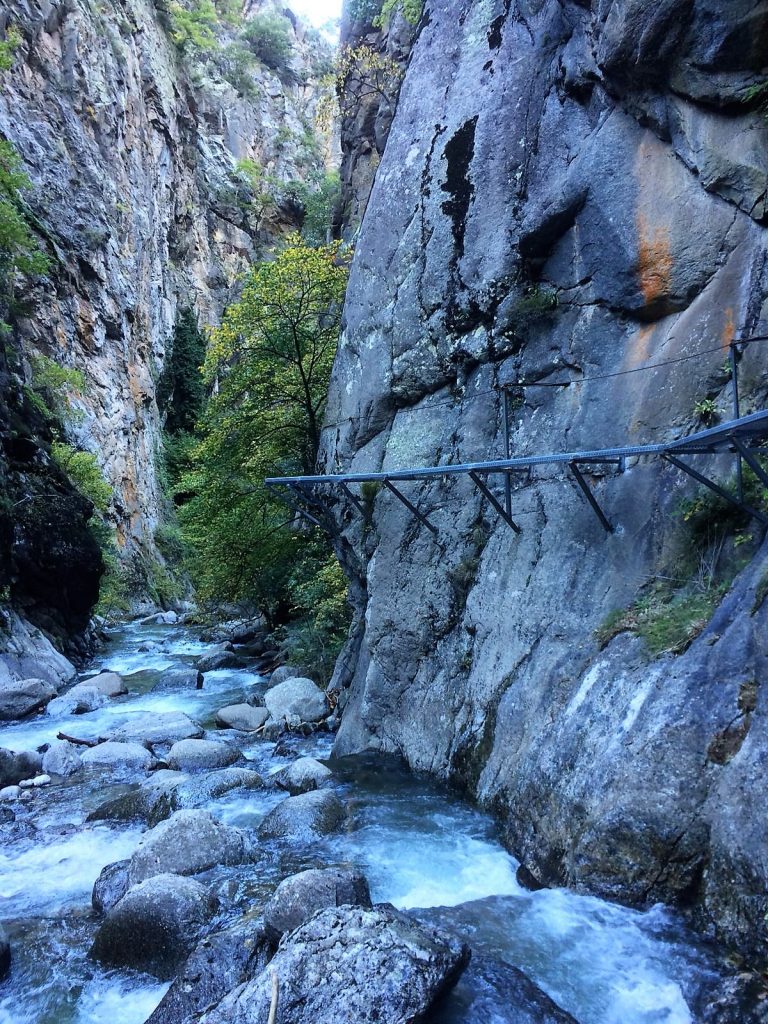 Walkways above the river 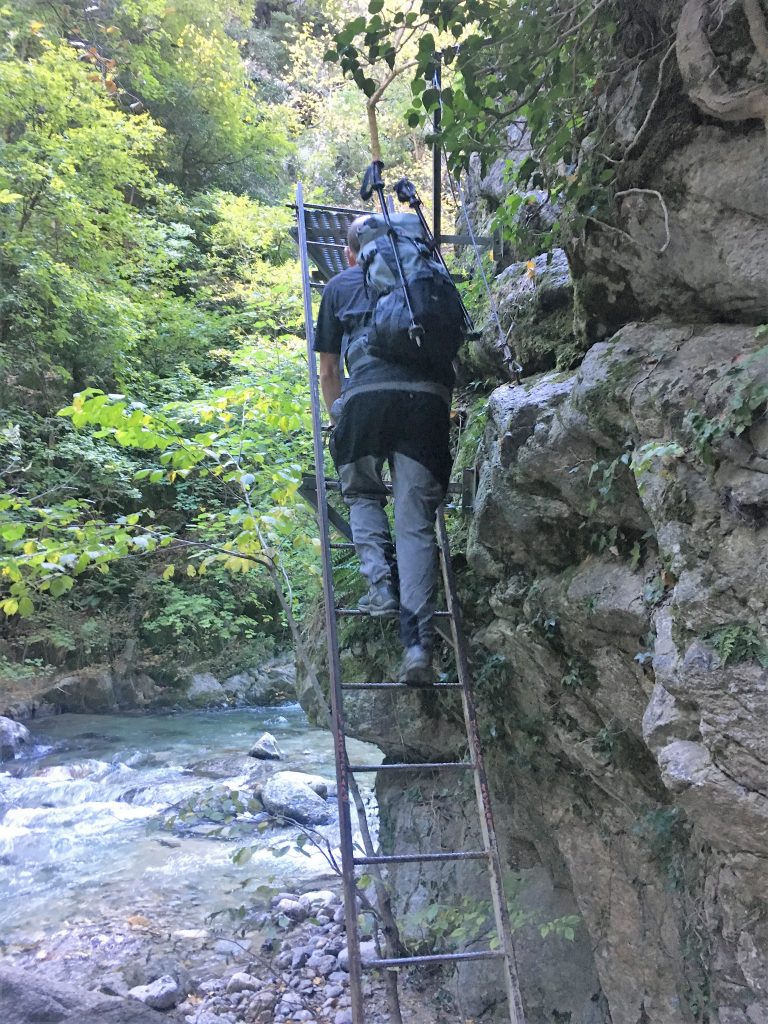 We really enjoyed this unexpected but adrenaline fuelled section of the walk. If you’ve ever done Via Ferrata this was like the very easiest of Via Ferrata without any safety equipment. It’s no surprise that dogs are not allowed on this walk, and I would caution against bringing small children this far unless you are very confident in their ability.

After the passerelles the path resumed it’s rocky course along and above the river gorge. Beautiful in it’s own right but feeling rather tame following the more adventurous section. At one point a small stone bridge and pathway seems incongruously placed in the middle of nowhere, but historically the river was used to transport logs down from the forests to the village sawmills and the stone path would have joined up with wooden walkways where the passerelles are now.

After about 10k and three and a half hours we reached a signpost. Twenty minutes further on would have taken us to the refuge but we were turning right and heading back along the Cami Ramader, a Catalan name meaning Farmer’s Way. This cattle tracked path led back towards our parking spot but much higher up the side of the valley. Along the way we found traces of the original farming communities who bought their livestock up to the high and steep pastures above the river. A small hamlet of ruined dry stone huts remain where once whole families would have migrated in the summer. The steep ground has been terraced by many generations of herders to create flat grassy areas held back by stone walls. It is amazing what humans will do to try to eke out a living in areas that seem inhospitable. 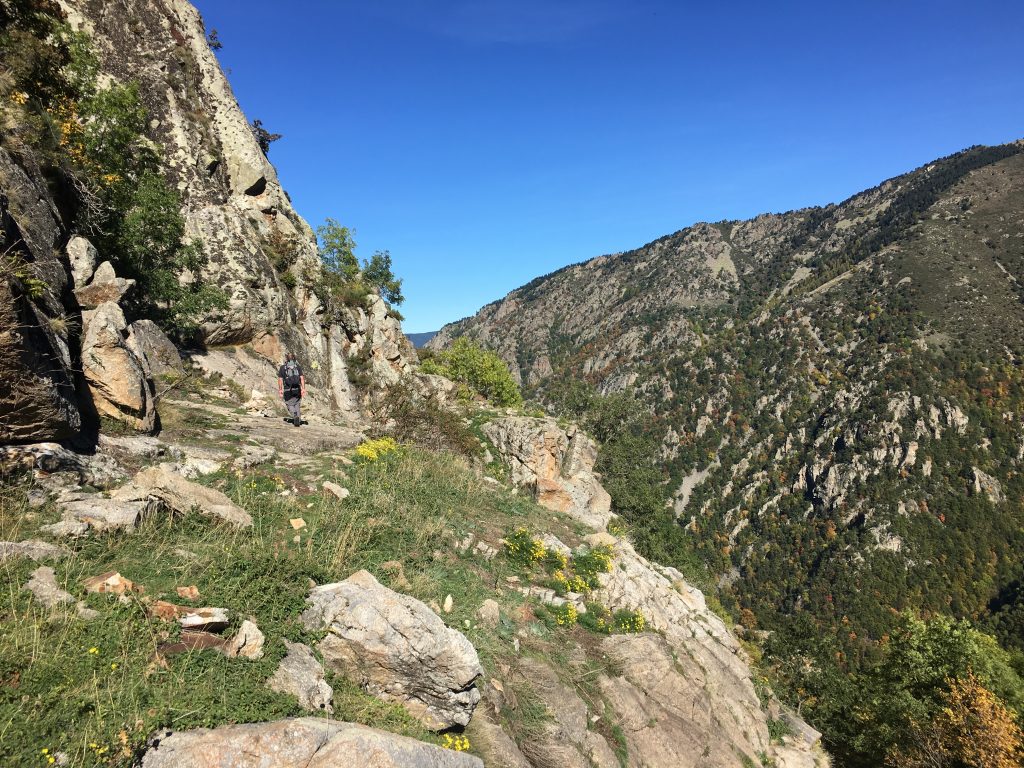 Pathways around the rock pinnacles 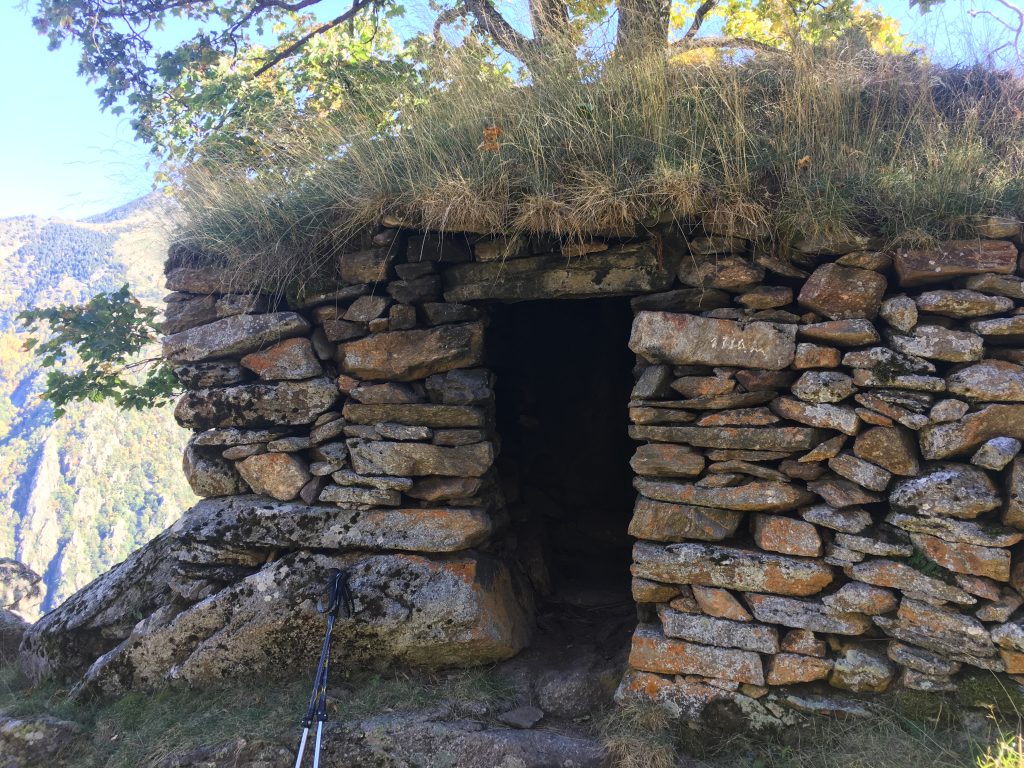 The path stays high for some time here, winding up and down between stone pinnacles – the ‘Campanilles’ mentioned on the map – and providing fantastic views across to the hills on the other side of the gorge. We started to get apprehensive about the downhill section as we were still so high up, and when we left the deciduous woodlands and entered the pine forests the path started it’s downhill trajectory and we started to feel the strain on our calves. Beside the path were what looked like metal bathtubs – evidence of the charcoal burning that once took place here. 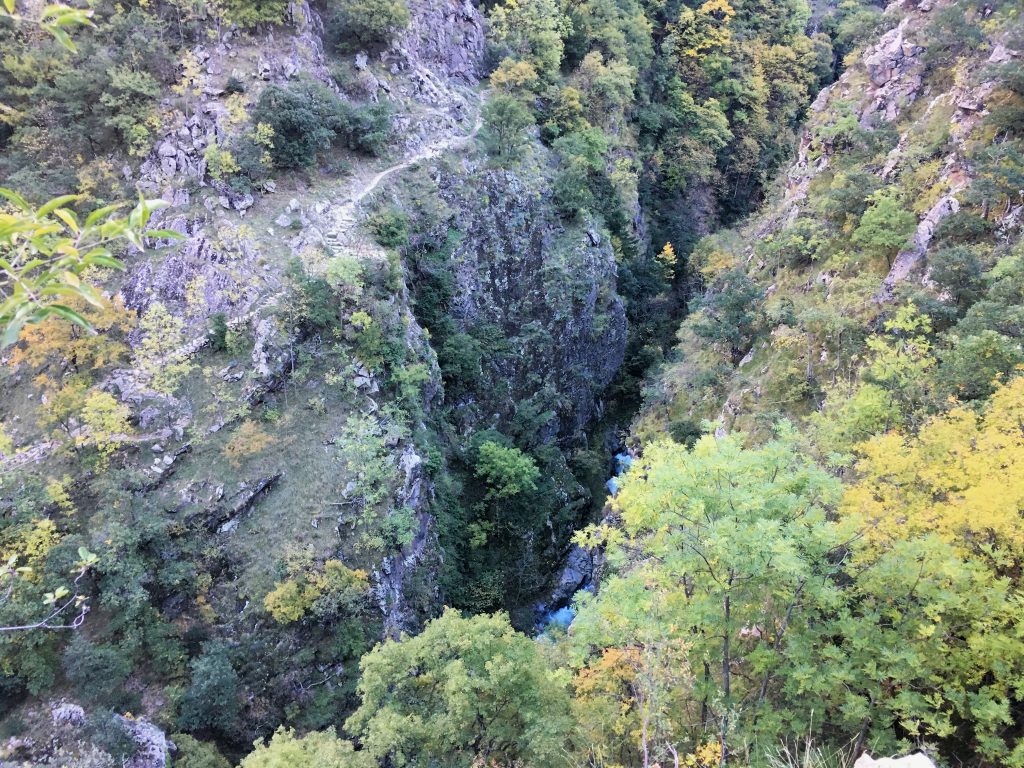 Looking back down at our original path 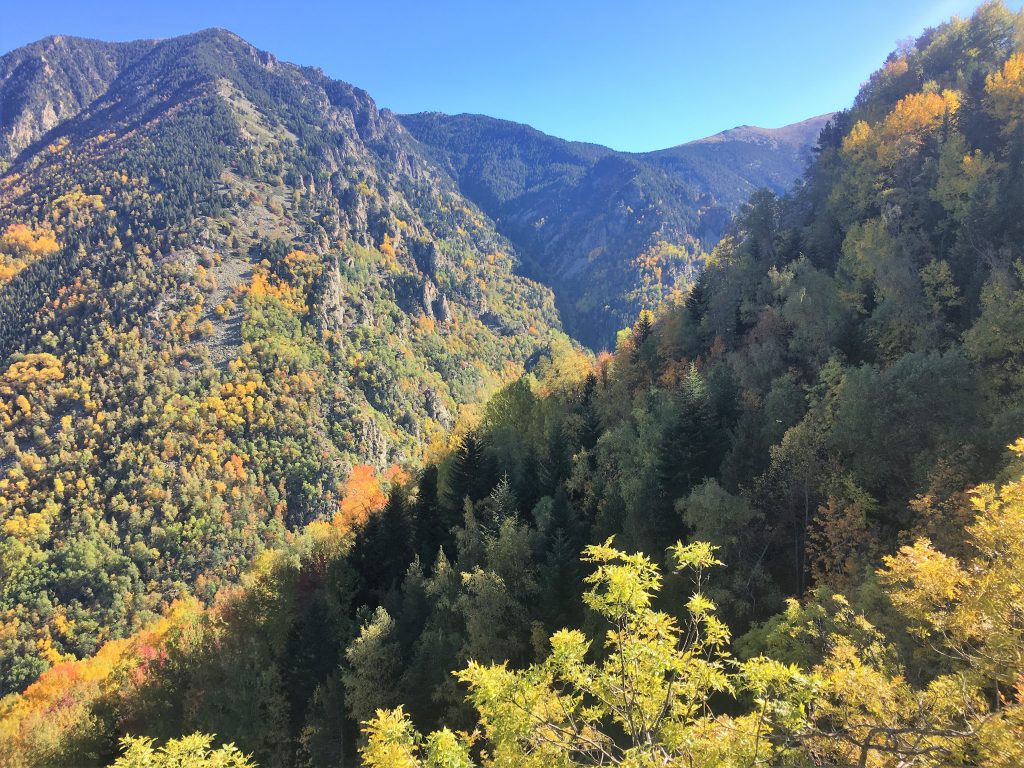 Autumn was here – beautiful colours on the hills

This path took us eventually to a junction where we could have turned right onto the corniche, but instead continued downhill along a section of 14 switchbacks to the original concrete bridge. This section of path had been shored up using stone walls again, improved at the same time as the creation of the corniche by the SNCF engineers who built the railway.

It had been a long walk, but an incredibly beautiful and exciting one. We will be coming back at some point to walk the corniche and explore other aspects of this historically interesting area. For now we took our aching legs back to Bertie and decided to stay another night in these beautiful surroundings.