Following our morning of sightseeing in Carcassonne we decided to crack on back into the Pyrenees. Our target was Les Angles, a large ski resort in the Pyrenees Orientales. Originally we had identified it as a destination due to it’s extensive mountain biking area but as Paul was still waiting for his mountain biking part we had a look for some walking routes instead.

The D118 road down to Les Angles followed the upper reaches of the Aude. After Carcassonne there was very little sign of flooding and as we got further south the river was constrained by the rocky walls of the Gorge d’Aude and Gorges de Saint Georges. I thoroughly enjoyed this part of the drive, the fabulously scenic road twists and turns through the gorge with the river rushing below. At times it’s single track, although there are plenty of passing places, the main difficulty was navigating around working vehicles who were making repairs, clearing hedges and removing overhanging branches from trees. At times this balcony road is cut into the side of the cliff which made me reflexively lean towards Paul, but the overhangs were never too low for us. 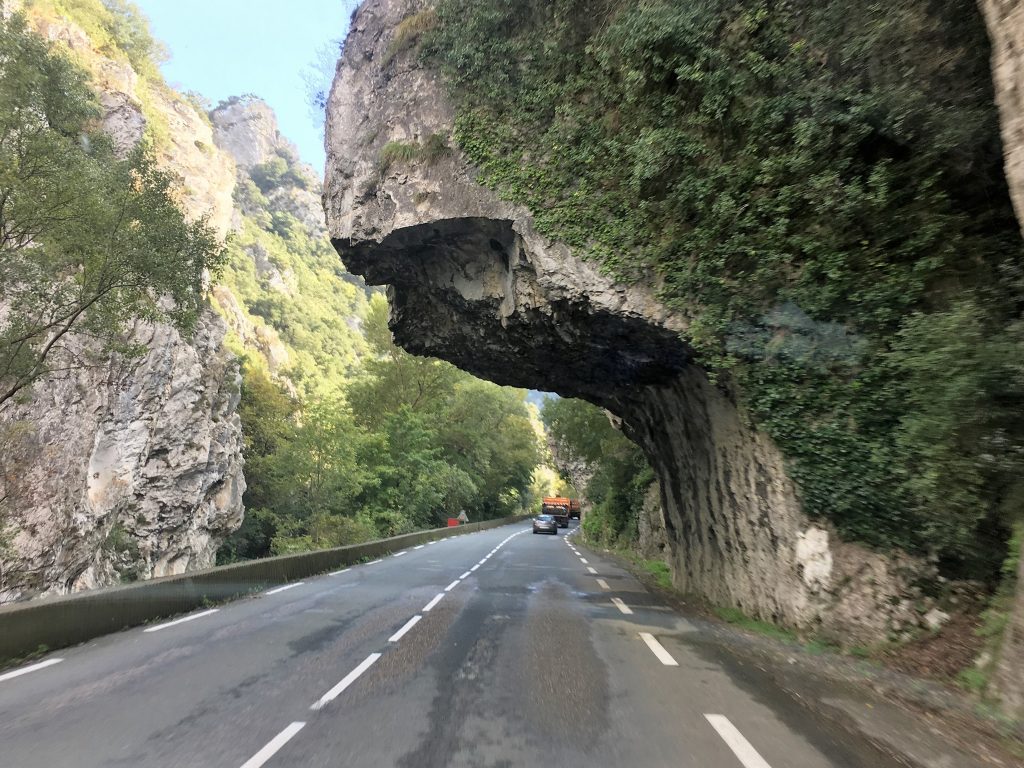 Overhangs, never too low for us at 3.5m 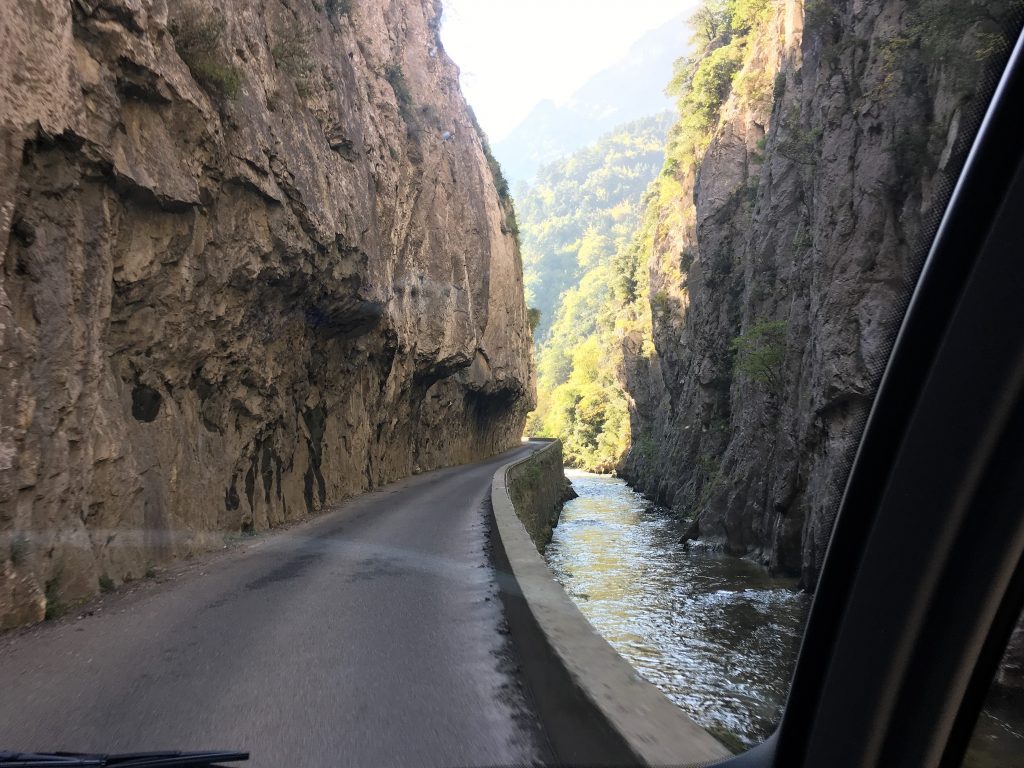 Narrow section of the balcony road

Paul, it has to be said, found the drive highly frustrating as he crawled around corners and past other vehicles. The amount of concentration and patience required took any joy out of the drive and he was relieved when suddenly the valley widened in front of us and we were in a completely different landscape.

Our first parking spot here was near the ski lifts at Pla del Mir. This designated motorhome parking is priced depending on the season, for us it was €6 including 16A electricity. It rises to €11 during the ski season but still seems good value for money. We settled in for the evening and while we had electricity I trimmed Paul’s hair and reduced his stubble to something a little neater.

The following morning we took a walk up from the parking area into the mountains. The character of the hills here was significantly different than the jagged peaks we had become used to. The hills slope gently away from the valley floor with large boulders peppering the grassy sward. We walked in the sunshine, enjoying a recovery walk that was a little less strenuous than usual. 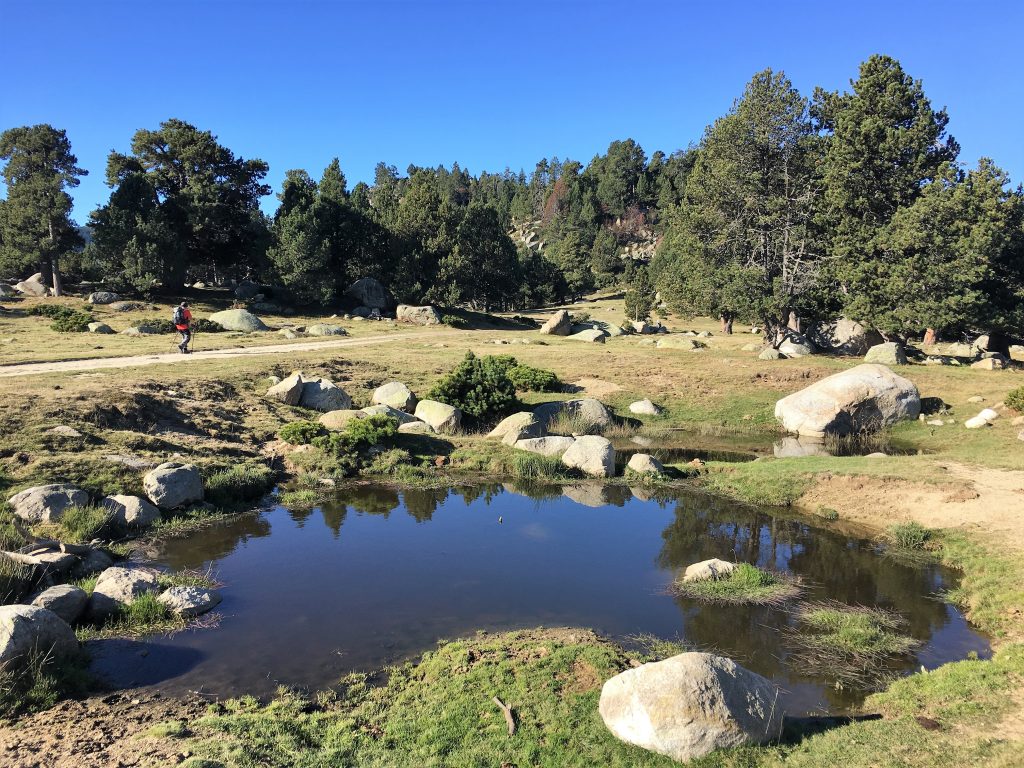 Boulders in the meadows

The route was on a track at first, running to the north of the Animal Park, and was well signposted as we wandered up through meadows and open woodland. We followed the signs to the Lac d’Aude, the source of the river that had caused so much trouble recently, keeping left where we had the option, which took us under the cliff face of the Roc del Filipe before we made our way to the southern shore of the lake. 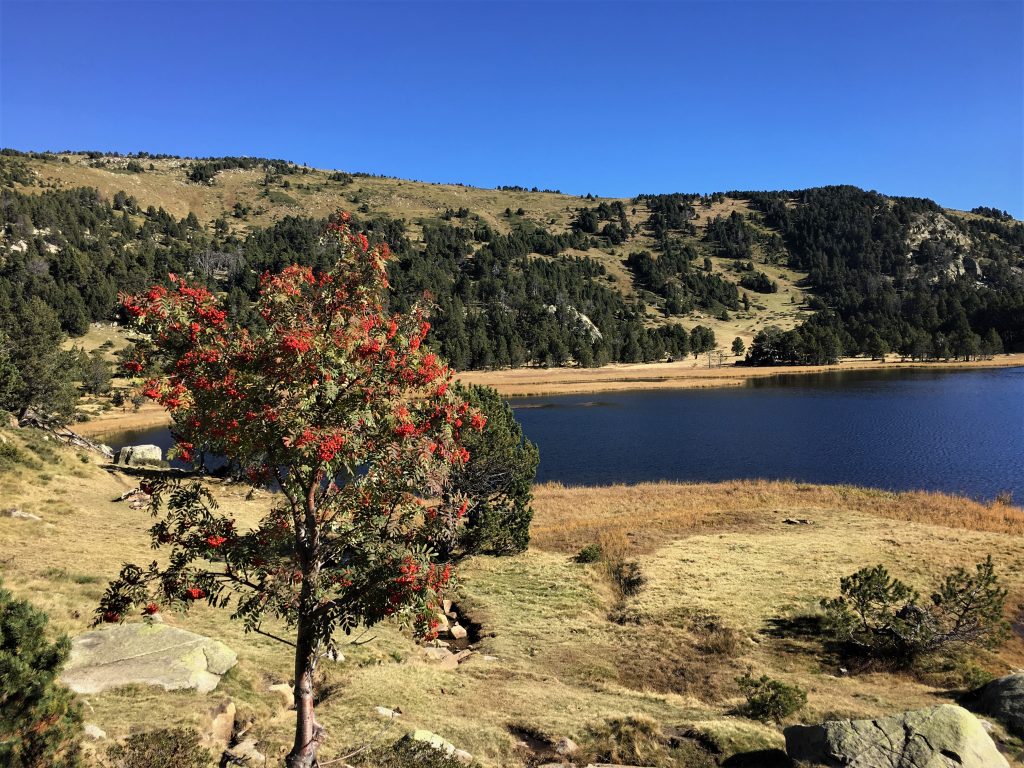 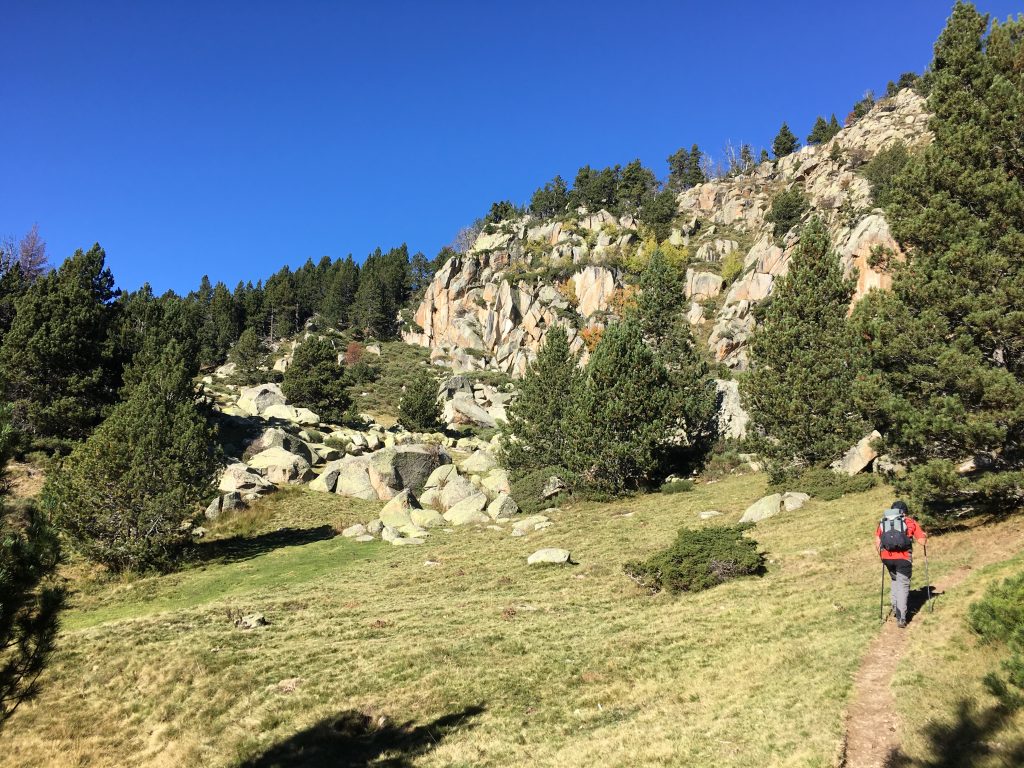 The cliffs of the Roc del Felipe

From here we walked around the lake eventually finding our return path leading vaguely southwest from the north west corner of the lake. This path was on the map but was poorly signposted and there were very few tracks on the ground. We eventually realised that we should be following the wooden posts with dark green paint that were sparsely distributed along the route. Thankfully the day was clear and we could navigate using the posts, our map and the infant river Aude to guide us in the right direction. We met our outward route again roughly where we expected on the initial section of track. It hadn’t been a long walk, and navigation issues aside it had been a pleasure to walk in such different scenery. 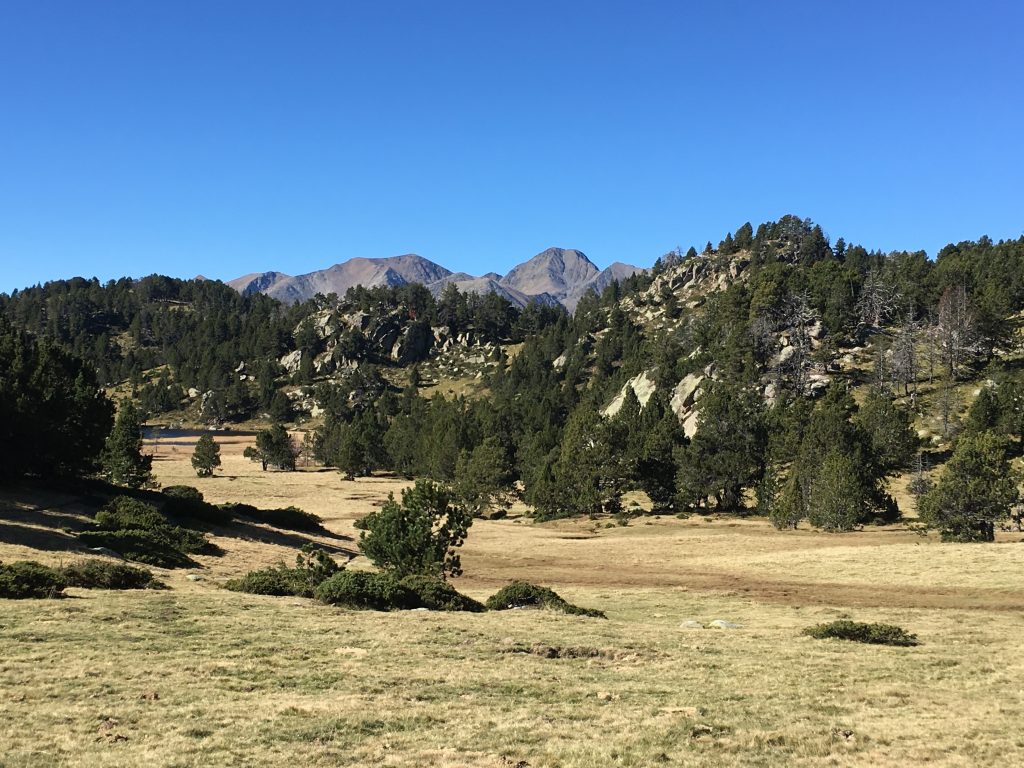 That afternoon we drove down to the Lac de Matemale where we parked up in a specific motorhome parking area (no services) with lovely views of the lake. An easy mountain biking route circles the lake, but with Paul’s bike out of action we were a bit stuck. The following morning we saw lots of people jogging past the van and so I decided that I would jog the 9k around the lake, Paul would give me a head start and see if he could catch me using my bike. He did! It’s been some time since I went for a run and although my legs were fine, I was mentally unfit, obviously far too used to walking and stopping for a break whenever I feel like it! 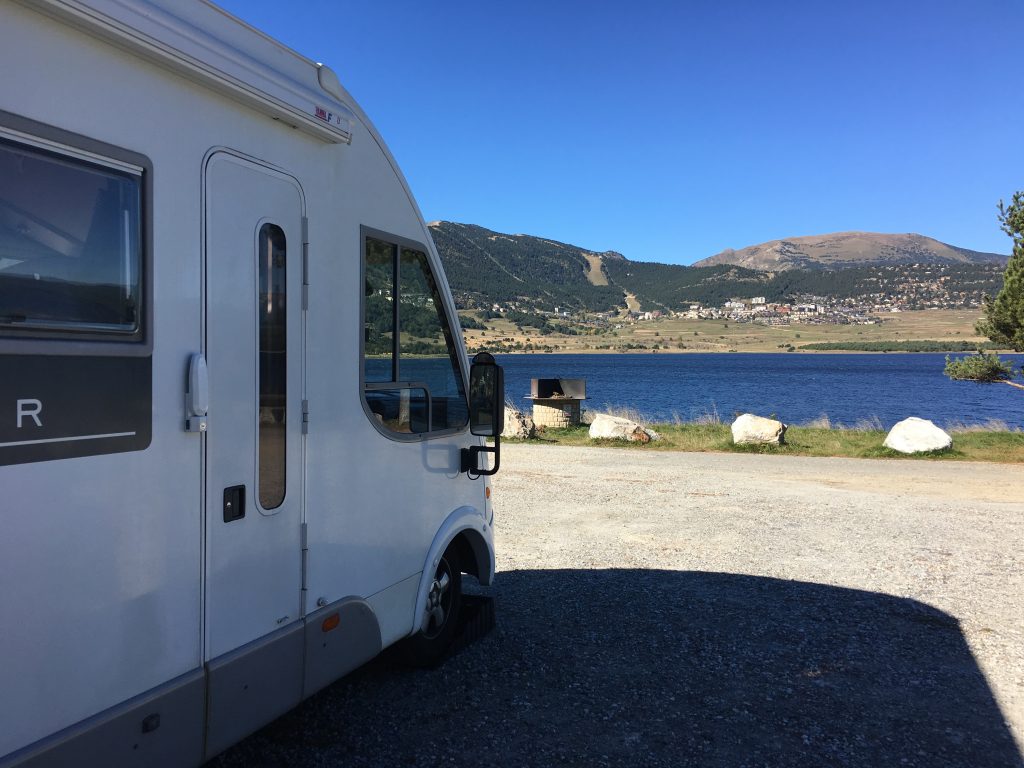 Our view across the lake, just beautiful