We nursed a mild hangover on Sunday morning, relaxing in the Lagbruguiere aire until Paul felt fit to drive. We needed to make our way back to the Pyrenees, this time to the  Pyrenees-Orientales, the easiest route would be following the Aude river south, but only a week previously there had been severe flooding along the Aude and we weren’t sure whether the roads were back open again. A bit of online research didn’t help us so we stuck with our original plan, hoping that any diversions would be clearly marked.

One of the things I find difficult to get my head around is the fact that the Aude river flows south to north. For someone who has mostly lived in the south of the UK this feels unnatural. As it drops out of the Pyrenees it carves gorges and gathers tributary mountain streams to contribute to it’s power. Just north of Carcassonne it bends east towards Narbonne, it’s Mediterranean destination.

So we drove southwards with Carcassonne our destination. We stopped for lunch at Lac des Montagnes, a very attractive spot high in the hills. There was motorhome parking here and we were severely tempted to stop for the rest of the day, but after a walk around the lake we decided to move onwards. 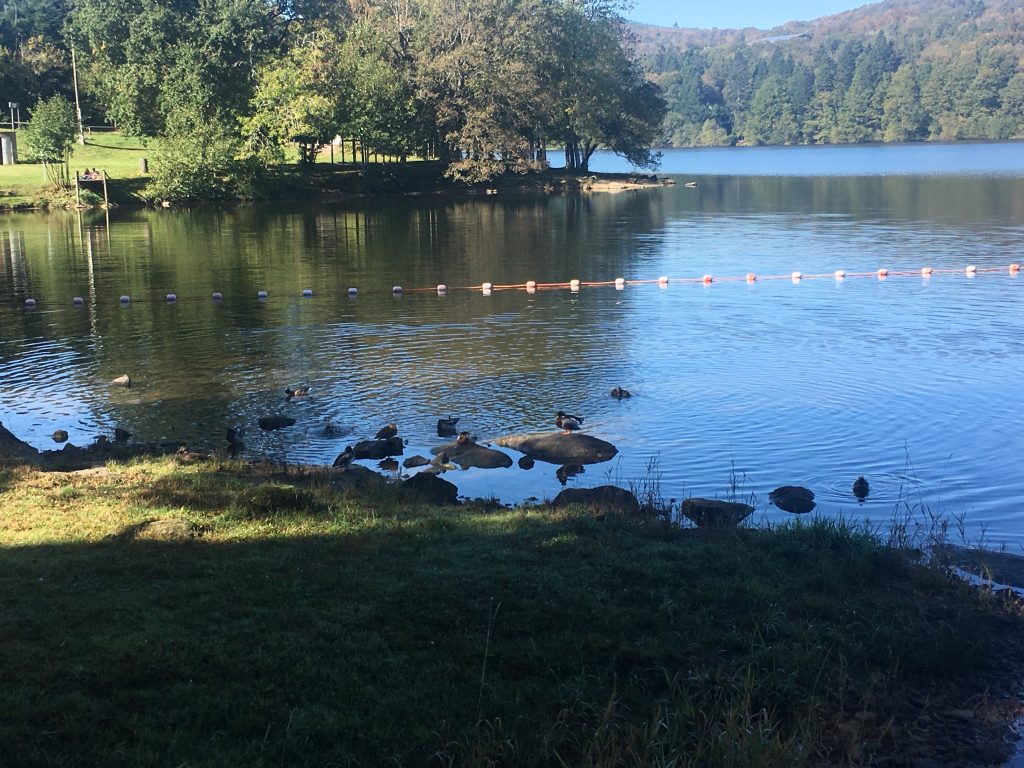 It was at Cuxac-Cabardes that we encountered diversion signs, sending us westwards off of the main road and via the very attractive village of Montolieu. Unfortunately I was too busy worrying about the signage to take pictures and enjoy more of this ‘Village of Books’, there were 3.5 tonne limits, one-way systems, narrow roads and bridges that made us slightly stressed as we tried to navigate our way through without ending up in some cobbled back street. We breathed a sigh of relief as we escaped out of the village, having ignored a 3.5 tonne limit in order to stay on the main thoroughfare.

We later realised that the reason for the diversion was the badly flooded village of Villegailhenc where sadly people had been killed by the highest floods since 1891.

We approached Carcassonne intending to use the aire outside the municipal campsite, but I had read a recent review that it had been closed due to the flooding, and as we approached it we could see it was barriered and taped off. It looked unaffected by the flooding but I could understand the caution as it is on level ground near the river. We drove around the southern part of Carcassonne a couple of times looking for an alternative parking spot, but on-street parking doesn’t appeal to us so we ended up driving slightly out of the city to the Lac de Cavayère where there is parking (no services) near the lake and park. We had another little leg stretching walk and then settled down for a blessedly alcohol free evening.

If we both had working bikes we could have cycled a long the cycle track from here back to Carcassonne, but Paul’s bike was still out of action. So the following morning we decided to drive to the bus and motorhome parking on the outskirts of the medieval city of Carcassonne. You can park overnight for free (between 10pm and 8am) but at other times you have to pay, the first half hour is free, but then the price goes up in 30 minute increments. You take a ticket on entry and then pay before you leave at a machine that takes credit cards as well as cash. I can see why they charge for parking as entry to the city is necessarily free, so this is their way to recoup the cost of maintenance of the ancient and heavily visited city. 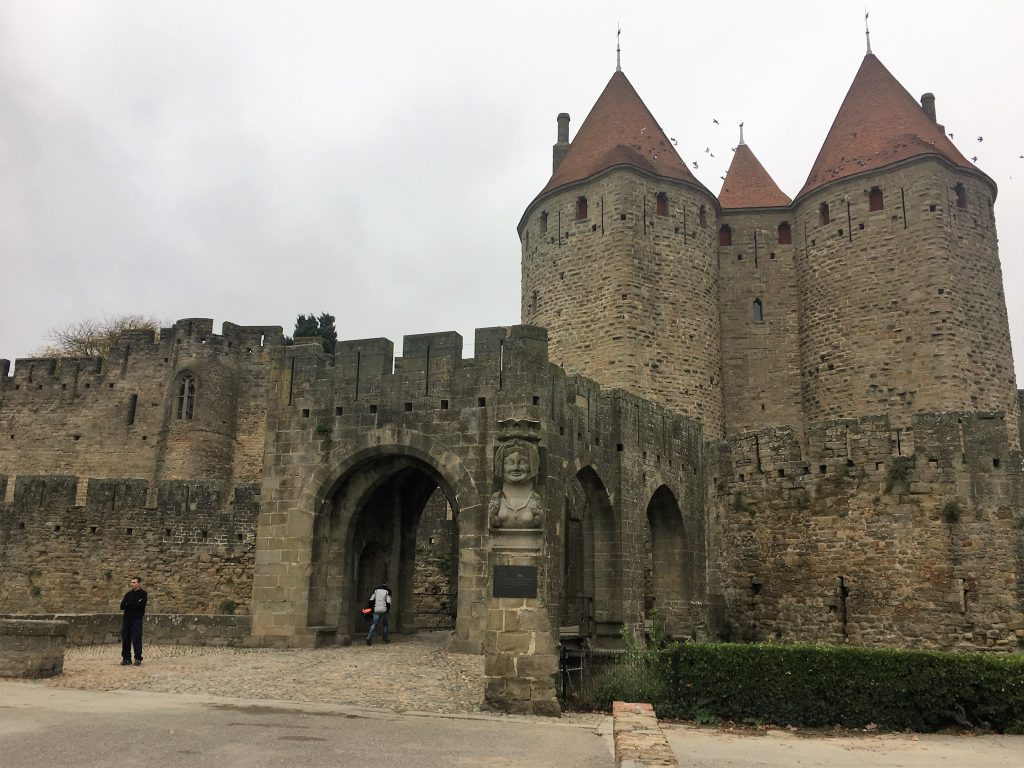 We walked around the city, first of all taking the route between the two sets of city walls, an area known as ‘le lices’ where medieval knights would have trained. Parts of this area were blocked off, so we moved into the centre of the ‘cité’ where tourism abounds; restaurants, hotels and gift shops make up the majority of the buildings here. I wonder if anyone actually lives in the cité. We popped into the basilica to listen to the beautiful choral music that was being performed (‘you can buy a CD as you leave’) and generally wondered at the many towers and turrets of the citadel. It’s amazing to think that this city was once so derelict that it was recommended to be  demolished. It’s now so perfectly restored that it feels almost sterile and Disney-esque. 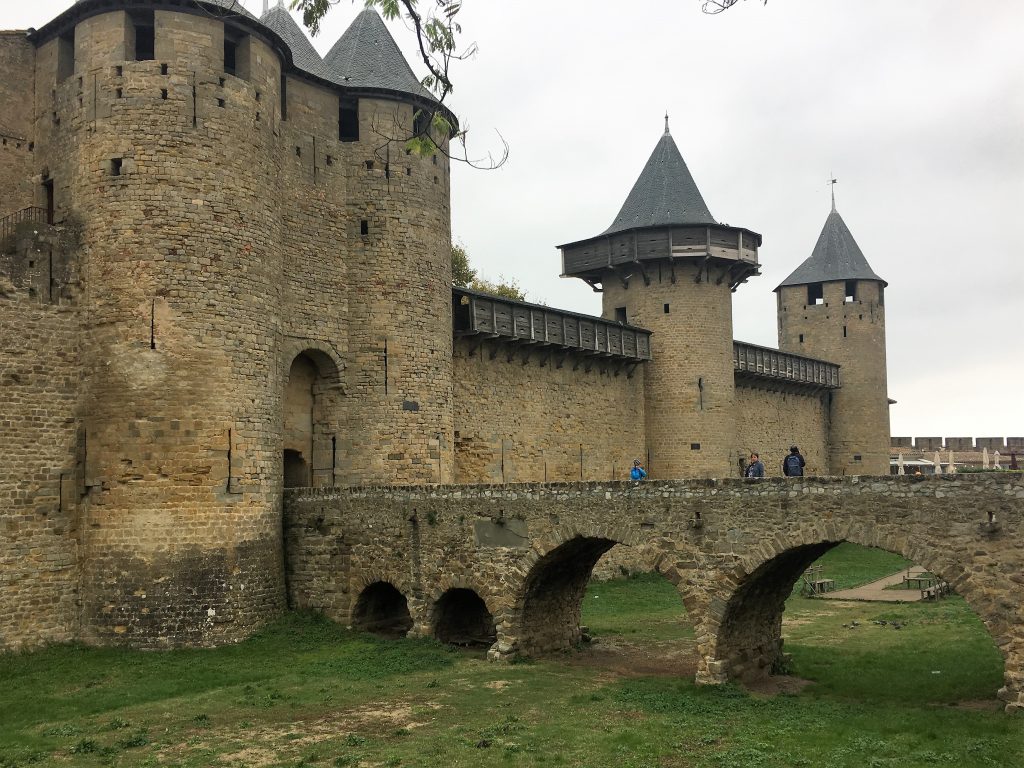 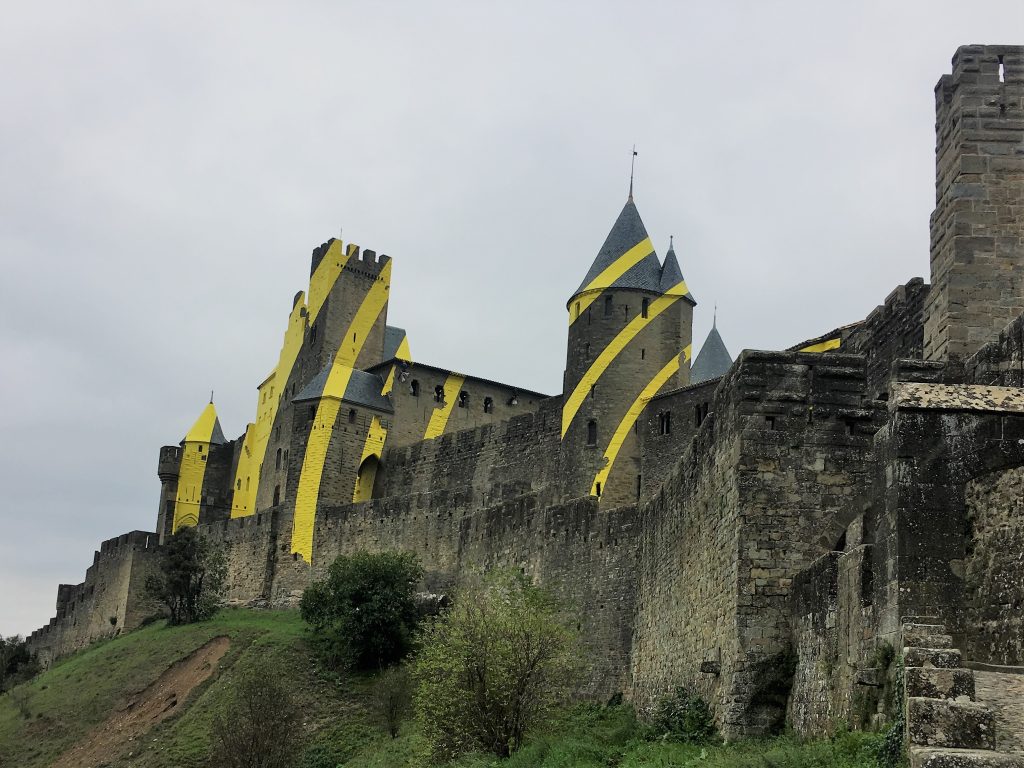 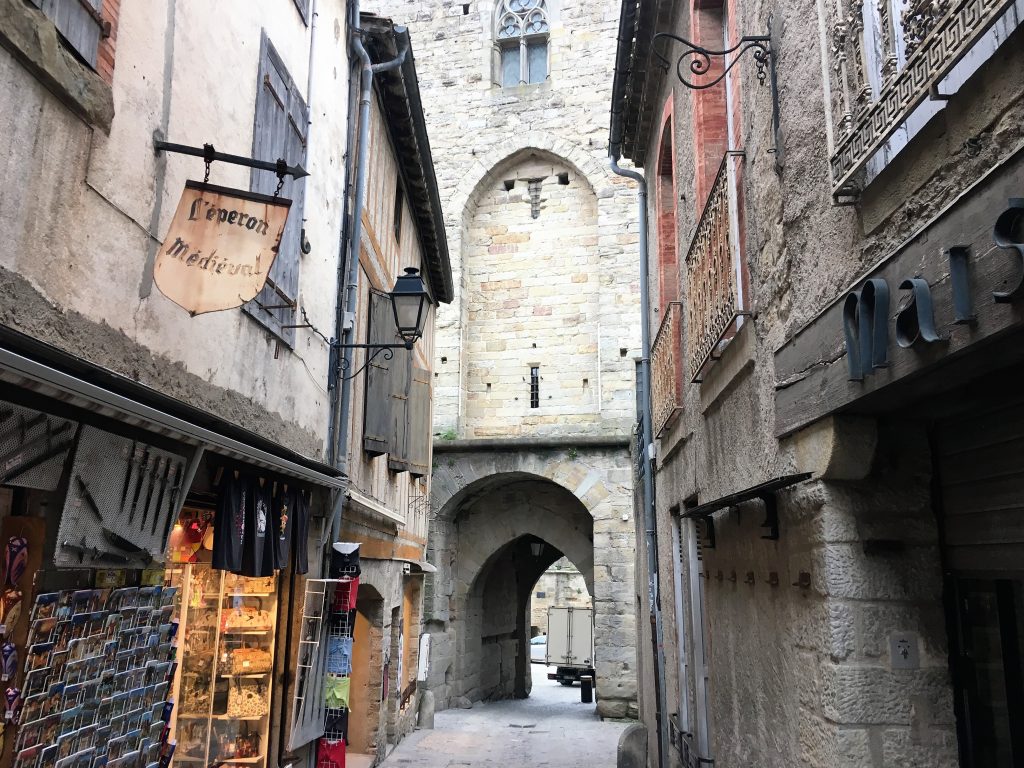 However as we wandered around we found evidence that all was not well, the recent massive amount of rainfall had caused the collapse of a couple of small walls inside the cite, and had badly eroded some of the gravel paths through le lices and out to the town below. As we walked around the outside of the city, taking in views of the walls from below, we could see that parts of the mound that supports the city had been washed away. Workmen were busy shoring things up and making good. This is where our parking fees go. 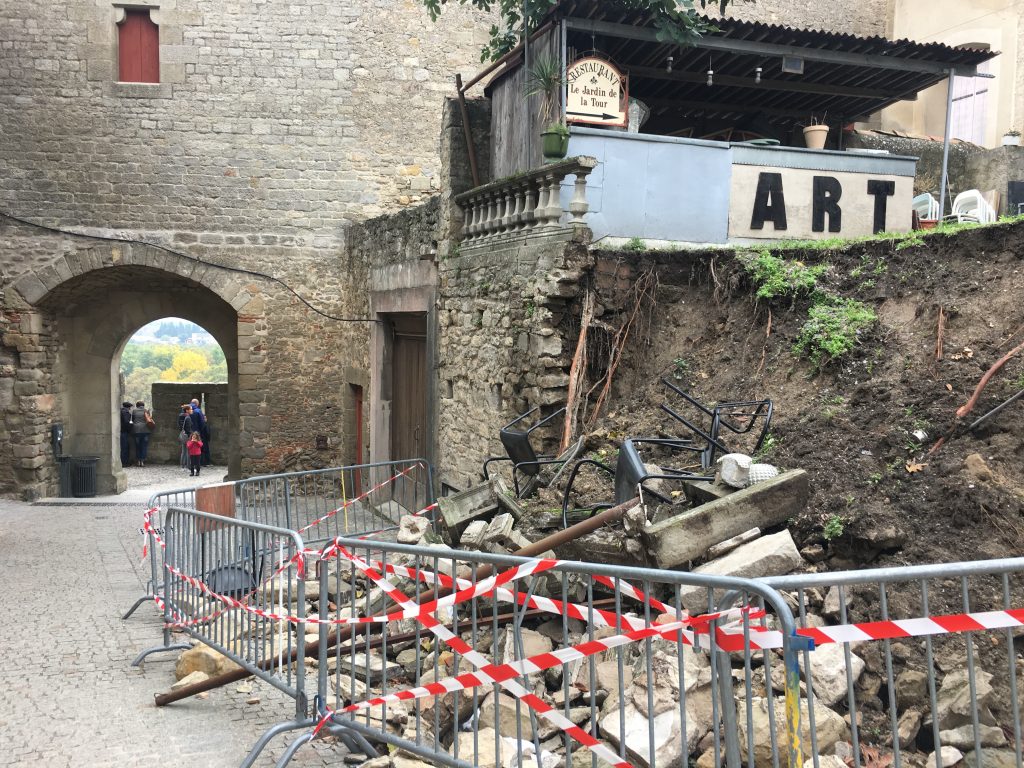 Collapsed wall inside the city