We spent the night of 22nd parked at Batalha in preparation for a visit to Batalha Monastery. We wanted to visit one monastery while we were in Portugal and it was a pretty random decision that bought us here of all the monasteries we had flagged as possibilities.

Batalha means ‘Battle’; the monastery was built by King João I to give thanks to the Virgin Mary for victory in battle over the Castilians in 1385. For many this was the deciding point in establishing Portugal as a country, distinct from Spain, and so the monastery has a special place in the Portuguese people’s regard. 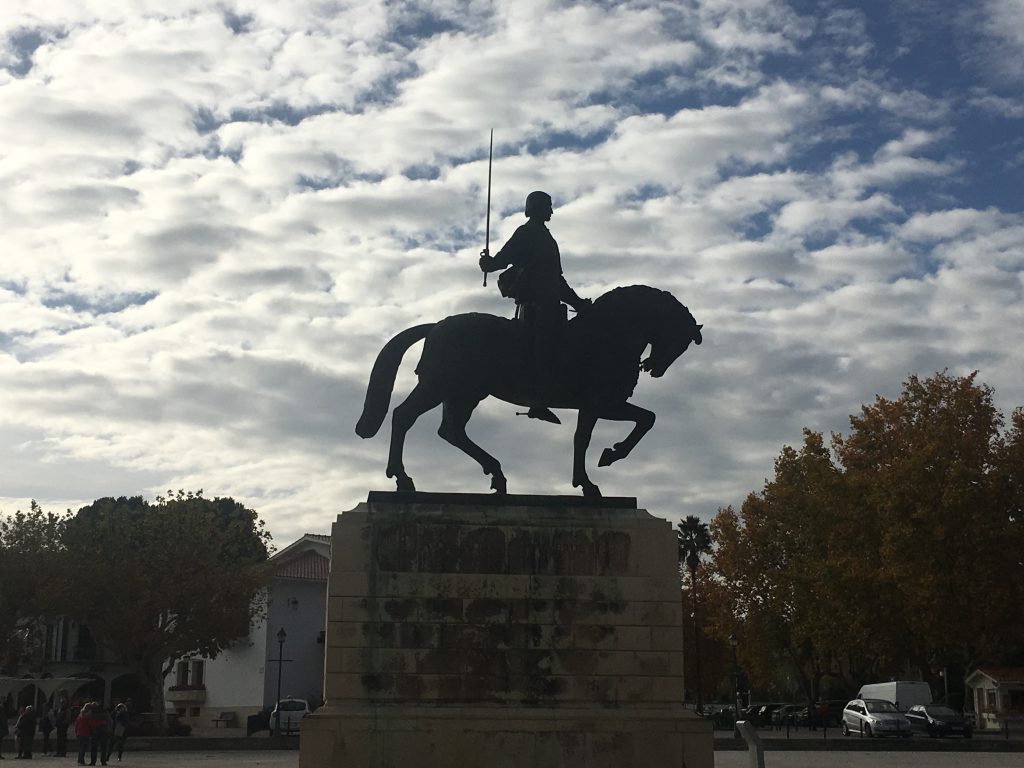 Statue of King Joao I

The church is free to visit but some of the other buildings require a ticket, after a bit of a search we found the tickets being sold at the back of the church and started our exploration. The building is beautiful with highly ornate stonework in parts, although the church interior was surprisingly stark. The contrast in styles apparently being due to King João’s wife – Philippa of Lancaster – inviting British architects to contribute to the design. We liked the chapterhouse with it’s vaulted ceiling which houses the Portuguese tomb of the unknown soldier, attended at all times by military personnel, the two cloisters, very different in style and the unfinished chapels with their ornate stonework left open to the sky and pigeons. 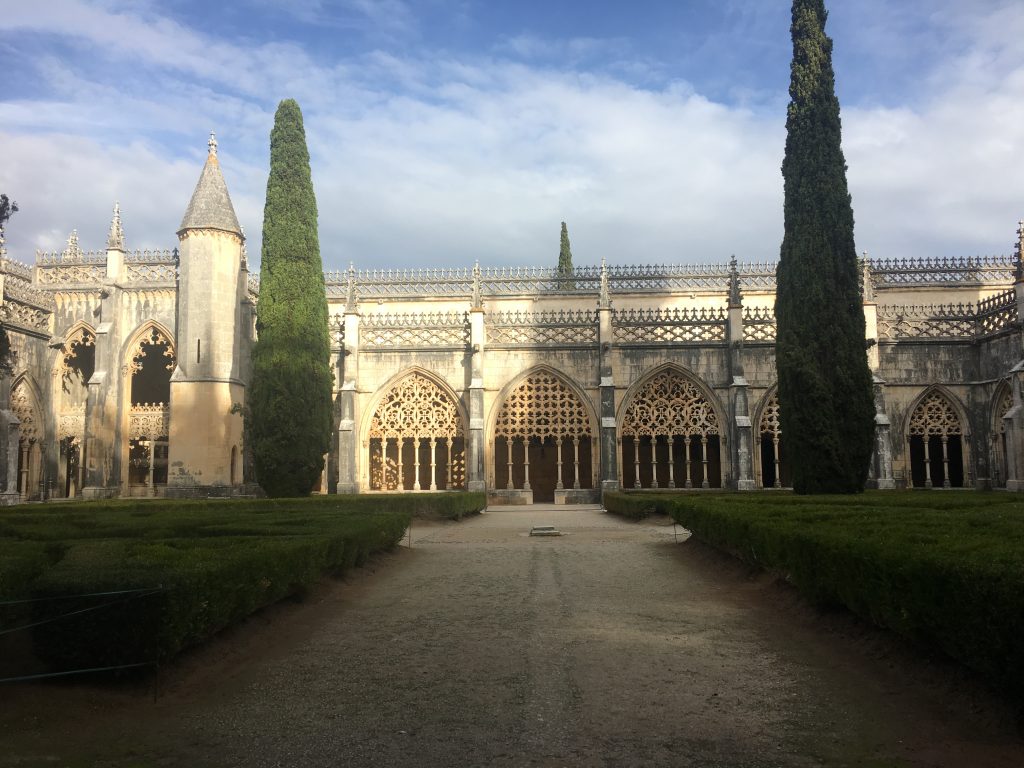 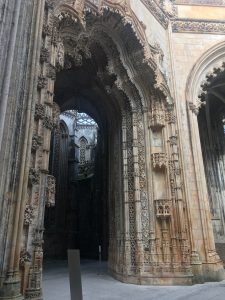 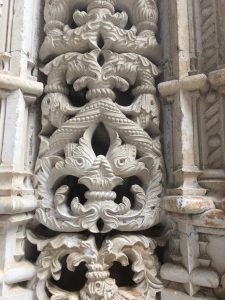 The ornate stonework of the unfinished chapels

After exploring the monastery we ventured further inland to Mira de Aire. This town is in a Natural Park area of limestone rocks, gorges and caves. We found our parking spot up near the sports complex at the top of the town after another sat nav disagreement (this time it tried to take us straight up a cobbled alley to the top of the town when there was a perfectly sensible road that cut uphill on a more gentle gradient) and wandered down into the town to visit the Grutas Mira de Aire, one of a few tourist cave systems in the area. We bought our tickets and waited for the tour with a handful of people only for a large school party to arrive. The sound of 40 eleven year olds having a good time was an assault to our ears. We crossed our fingers that they would be giving the kids a different tour but it was not to be. With apologies they lumped us in with half of the class. We watched a documentary about the geology of the area (they obviously didn’t believe in dumbing down) which was interesting when we could read the subtitles, but guesswork when showing white subtitles on a limestone background. Then we went down to view the caves, the guide providing commentary in both English and Portuguese.  The part of the cave system on display was vertical, so we descended lots of steps (there was a lift at the end to take us back to the surface) it was well decorated with stalactites, stalagmites, curtains and flowstone. Despite the fact that this is a tourist attraction, has some fairly garish lighting, and water is pumped through during dry periods we still enjoyed viewing the impressive natural decorations. 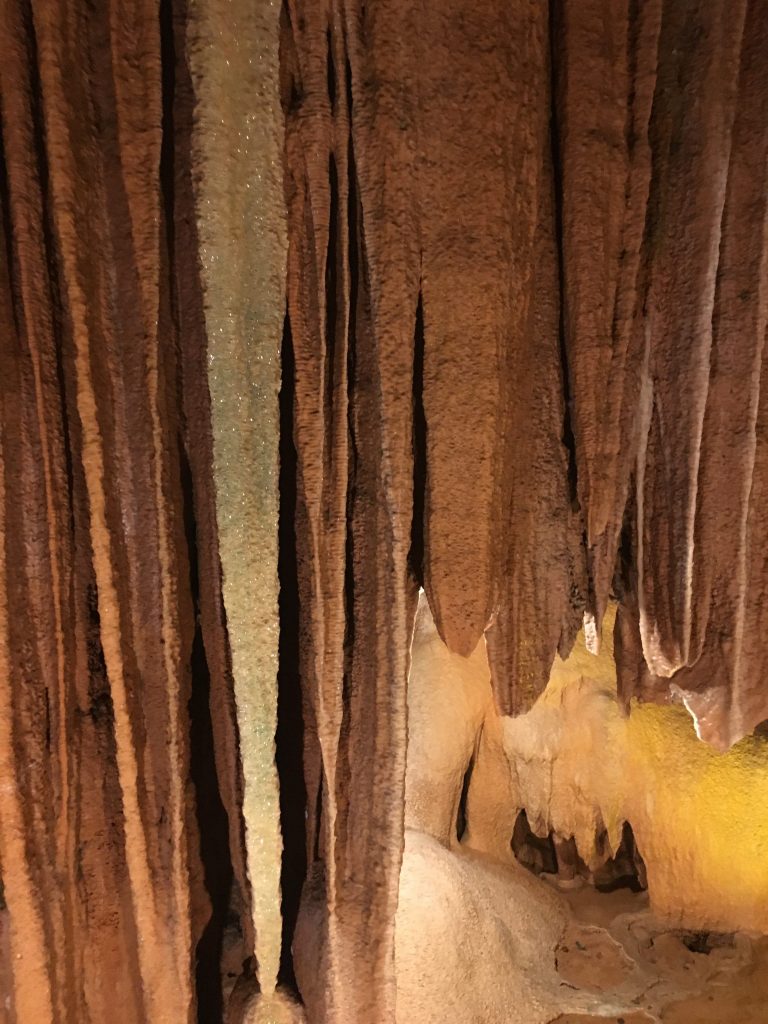 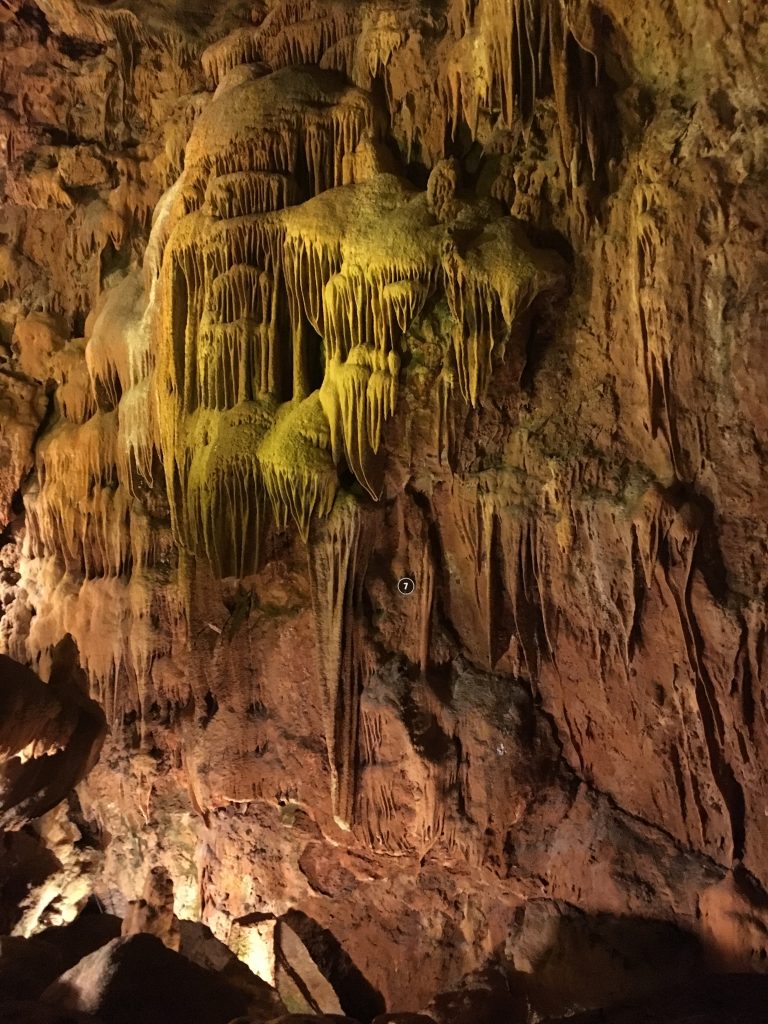 Some of the many stalactites in the cave

We left the caves, walking back uphill to Bertie. The skies were dark with cloud and the first spots of rain started to fall. It quickly got heavier and Paul decided that he wanted to escape the rain rather than stay for the night. We drove back down to the coast in heavier and heavier rain with occasional flashes of lightening. As we approached the coast we got stuck behind a car doing about 15mph, not sure whether he was scared of the dark, worried about the rain or just drunk, we kept our distance until they slowed to a complete stop halfway round a roundabout. We gingerly edged past them and down to our parking spot.