We had a moment of deja vu as we approached our next destination of Sao Pedro do Moel. This is Portugal’s Silver Coast and had some striking similarities to France’s Cote d’Argent; long sandy beaches, big waves for surfing and dunes backed by pine forest. We drove to a parking spot on the coast just north of Sao Pedro where we had a view from the cliffs with the lighthouse to the south and a long golden beach to the north.

This area had seen significant forest fires this year and we drove through large swathes of burned forest where the sand and ash and dead trees created a starkly monochrome scene of desolation. 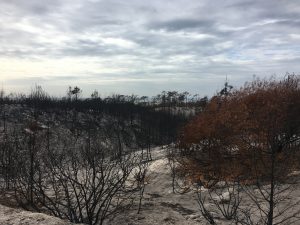 The black and white of a burned forest

We took a walk along the cliffs and then down onto the beach, watching fishermen casting into the surf and exploring the lagoon created where the river pooled behind a sandbank. The wind was blowing strongly although the skies were blue and people were wrapped up against the chill. 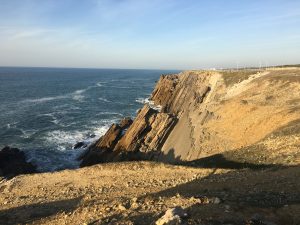 Cliffs slowly slipping into the sea

The following morning we got on our bikes and followed the bike track north. The road was long and straight, passing coastal resorts that had shut down for the winter, few people seemed to live in these towns where most of the shops and cafes were boarded up waiting for next years tourist season. We sat on the beach in one location watching the sea and were alerted to a pod of dolphins by large numbers of gannets, cormorants and gulls swirling around and diving for the fish that were being driven to the surface. There was life here, but not much human activity. 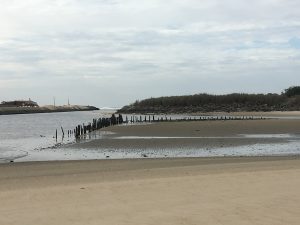 The river at Praia de Vieira