As I’m writing this blog post I am sitting in Bertie at a parking spot on the meditteranean coast and the outside temperature is 21°C. It’s a far cry from the single figure days and frigid nights in the Pyrenees. The one common thread is sunshine. We have been really, really lucky; our time in the Pyrenees has been sunny more often than not and now we’re down at the coast in the sunshine too. While we were in the mountains we had seen news of flooding in France and more latterly reports of heavy rain and flooding on the Catalan coast of Spain but we’ve managed to avoid the worst of it. Fingers crossed that luck will continue.

These two days were to be our last in the Pyrenees for now. We had finally decided that we would allow ourselves some beach time, a treat for being so active for the past eight and a bit weeks. Before we left we had two more walks planned in the Vall de Boi. Originally we were going to base ourselves in the car park by the hotel at Caldes de Boi. But there is no phone reception there and so we decided we would backtrack down to a parking area by the side of the road. Not that we absolutely MUST have data, but …

So we moved back downhill , the only downside of this parking area was the noise of the trucks going past as went back and forth to the Mineral Water bottling plant up the road. Luckily they didn’t work overnight, but they made an earlier start than we usually do. Oh and it was a little bit sloping, we ended up using our levelling blocks which doesn’t happen very often.

Our first walk left from this parking spot, following the Ribera de Sant Nicolau, mostly a there-and-back journey, but with a couple of options to add a bit of variety.  We weren’t going any higher than about 1900m so we didn’t have to worry about snow and there was nothing demanding about the path that rose steadily at an easy gradient. This was going to be a leisure walk for the joy of the scenery and it turned out to be a favourite.

From our parking spot there was a short walk up to the next car park, somewhere we couldn’t drive Bertie but smaller, thinner (ie under 2m wide), vans would be able to access. It didn’t really matter because it was only a short walk and on the way we had nice views of the river and came across an old lime kiln. 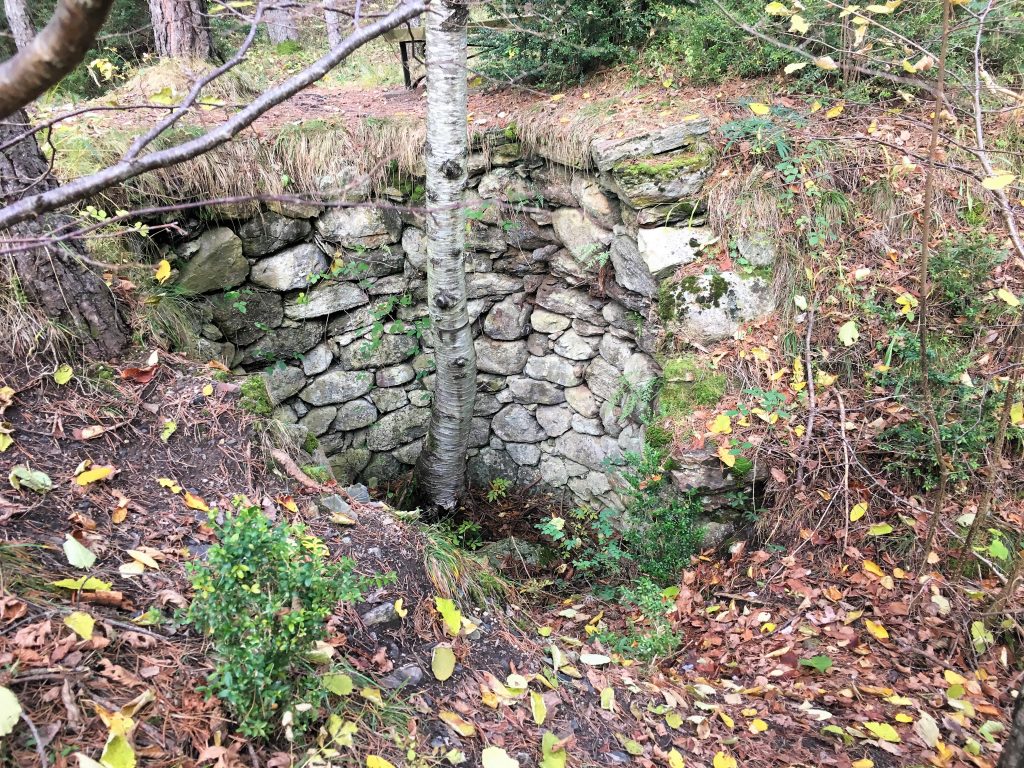 Remains of the lime kiln

A little way further up the path and we came across our first challenge. The Pyrenean cow is a cute looking creature with fluffy ears and long lashed eyes, but they make a heavily muscled and obstinate barrier in a small space. They had congregated on the path, crowding together for warmth. Of course cows are inquisitive creatures so they wanted to get closer to us rather than back away. With the electric fence behind us there was no chance of us being able to back off and let them pass us, we were going to have to push past them. Paul did his best cow-herd impression and chivvied them backwards (not a cows favourite direction) until we got to a spot where we could get off the path and go around them. It was only about 5 meters but it took a good twenty minutes. 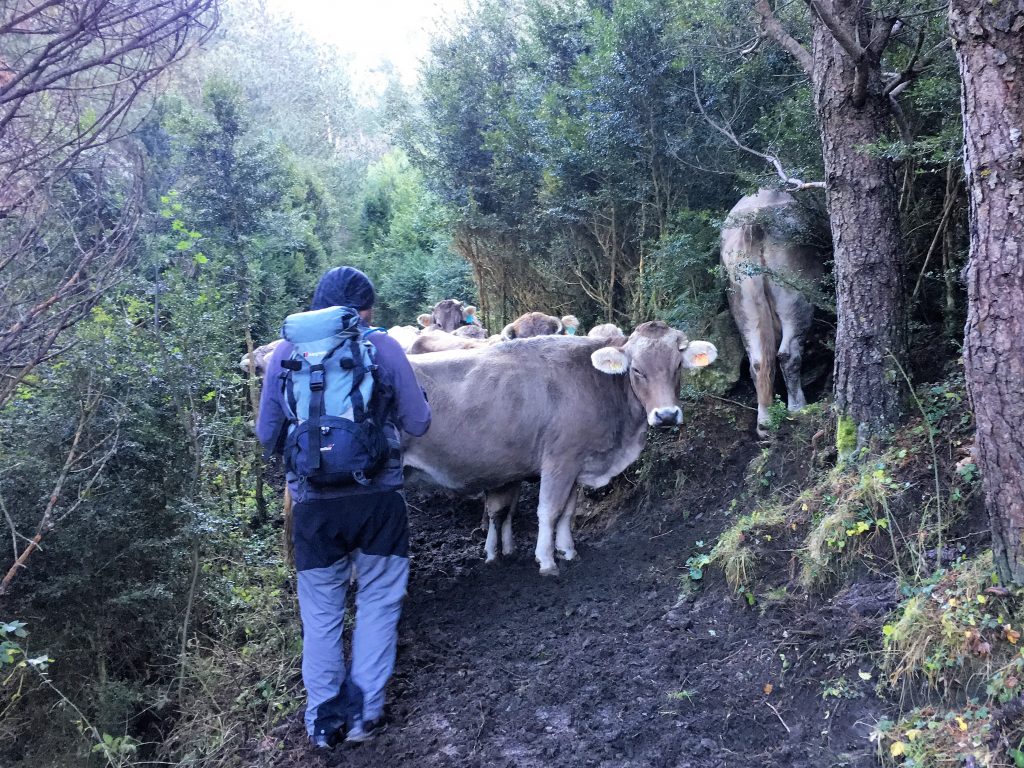 The path continued to a bridge across the river. Here it is possible to walk along both sides of the river, so we crossed the bridge on the way up and came back down using the other path, it’s definitely worth doing both. The path on our side of the river is called the Otter path, but we weren’t lucky enough to see any. There were squirrels though, red squirrels and their black cousins scampered between the trees industriously preparing for winter. Along this path we also passed the chapel and partially ruined hermitage of Sant Nicolau, only opened for the annual pilgrimage on the 1st of July. 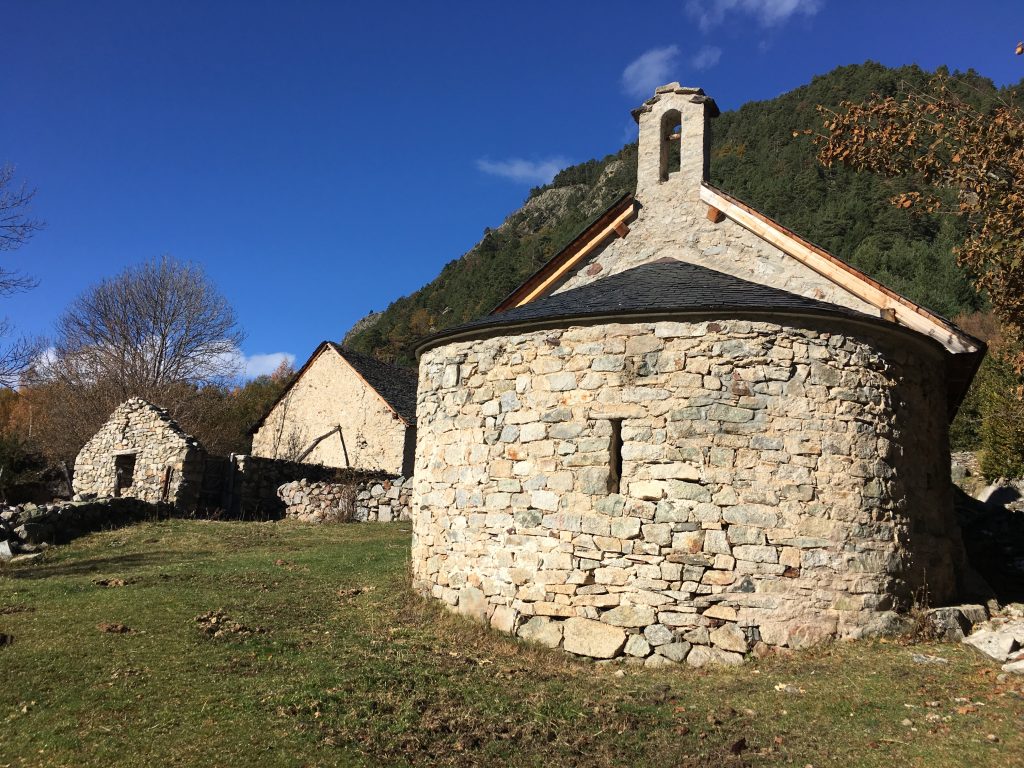 Chapel of Sant Nicolau and the hermitage buildings

The Estany de Llebreta is the point where the two paths meet again, we dropped down to it’s shores where the calm water reflected the autumnal trees on the far side of the lake. On the way back we followed the lake-side path to it’s western end where we crossed a bridge to take us onto our return route. 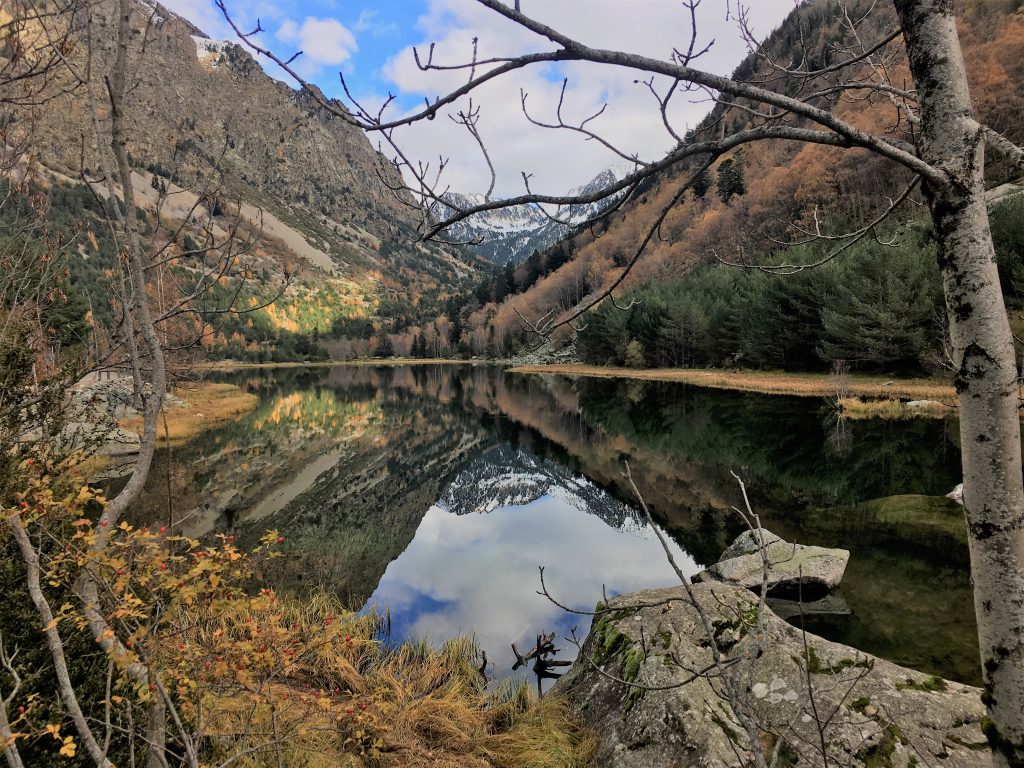 Reflections in the Estany Llebreta

At the far end of the lake is a beautiful waterfall, a series of stone cascades and pools with a path that climbs easily by it’s side. We clambered up the rocks and finally emerged onto the Aigüestortes plateau. 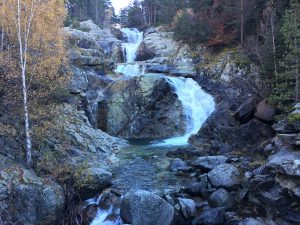 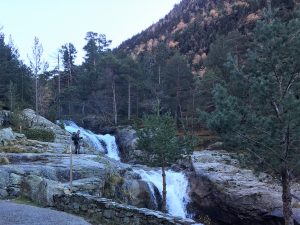 On the Aigüestortes plateau is where you can see where the name –  the tortuous waters – derives from. The river twists and turns in slow but tight meanders through the valley, flowing under broad leafed trees and across meadow grass, crossing between erratic boulders and shaded marshes. It’s a beautiful place for a picnic and we sat here in the warming sun just taking it all in, watching the vultures taking to the thermals in the blue sky above us. 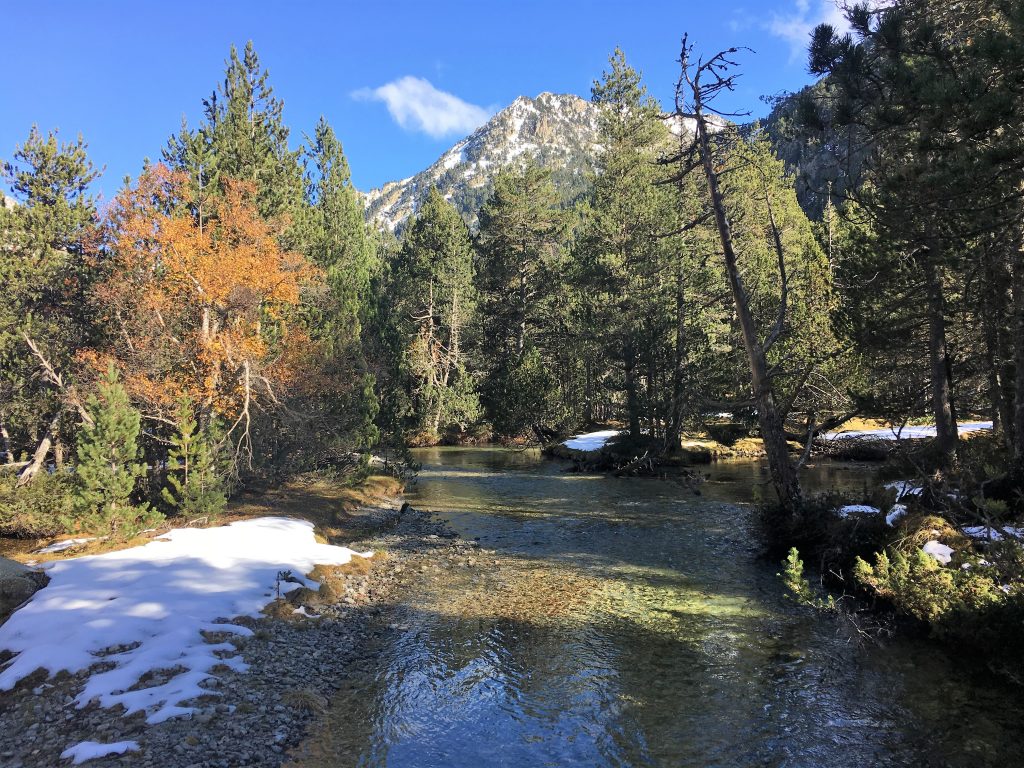 If you cant walk this far the national park taxis will bring you all the way to the plateau, where there is a wheelchair accessible route that explores the river for a couple of kilometres. We followed this route with it’s shaded views of the water, but in these winter conditions the shade had left the boardwalk icy and treacherous, rivalling the cows as the most challenging part of the walk.

You could also take a taxi to this point if you wanted to walk deeper into the park. This path eventually links up with the Estany Sant Maurici, where we’d been a few days before. It’s a long walk but with the help of the summer bus service that goes between the two ends of the walk you could do it in a day, or stay in the refuge at Estany Llong to make it two more comfortable days. It feels like a challenge for the future, linking the two places that give the national park it’s name.

We stayed in the same parking spot overnight and then drove back up to the Caldes de Boi the following morning. We had a couple of possible walks to do from here and we chose to do something a little more strenuous today, walking up the steep slopes on the western side of the valley to reach the two lakes Gémena de Baix and Gémena de Dalt.

This path starts on the road north that leads to the reservoir, but soon turns off to the left past a couple of large erratic boulders. It climbs steeply through the forest amongst mossy boulders and silver barked trees. 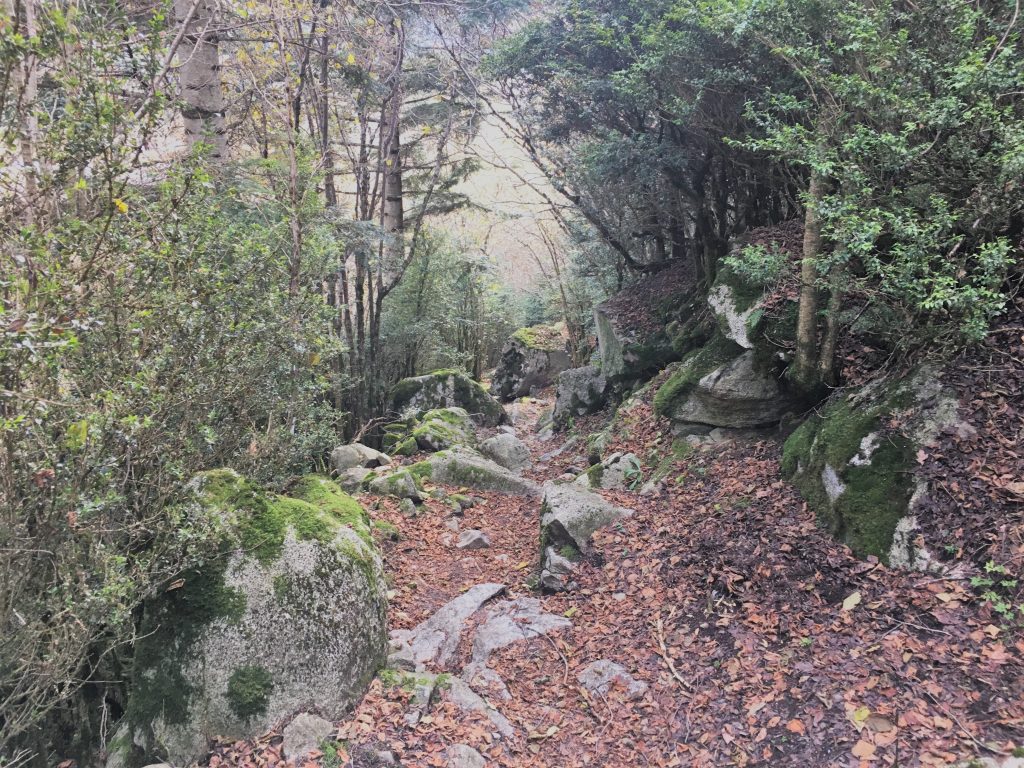 The route up through the forest with it’s mossy boulders, remnants of avalanches past 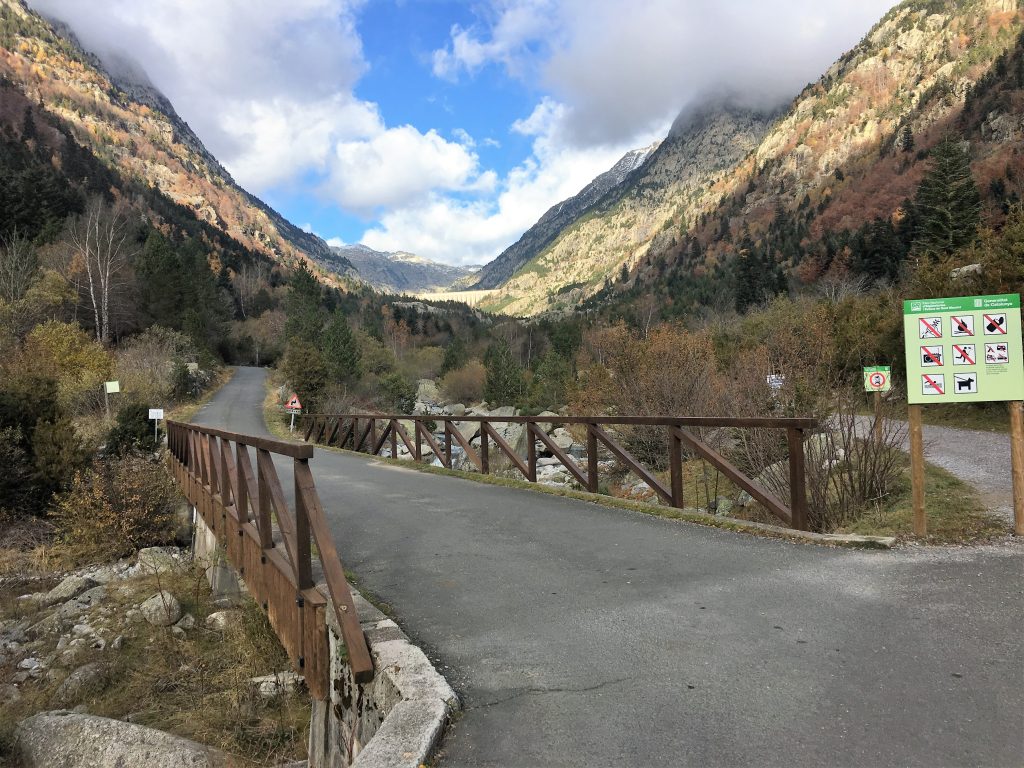 After a while you start to hear the sound of the river, but only ever catch glimpses of it between the trees to the left until the steep slopes level off and the path crosses the intertwining streams. 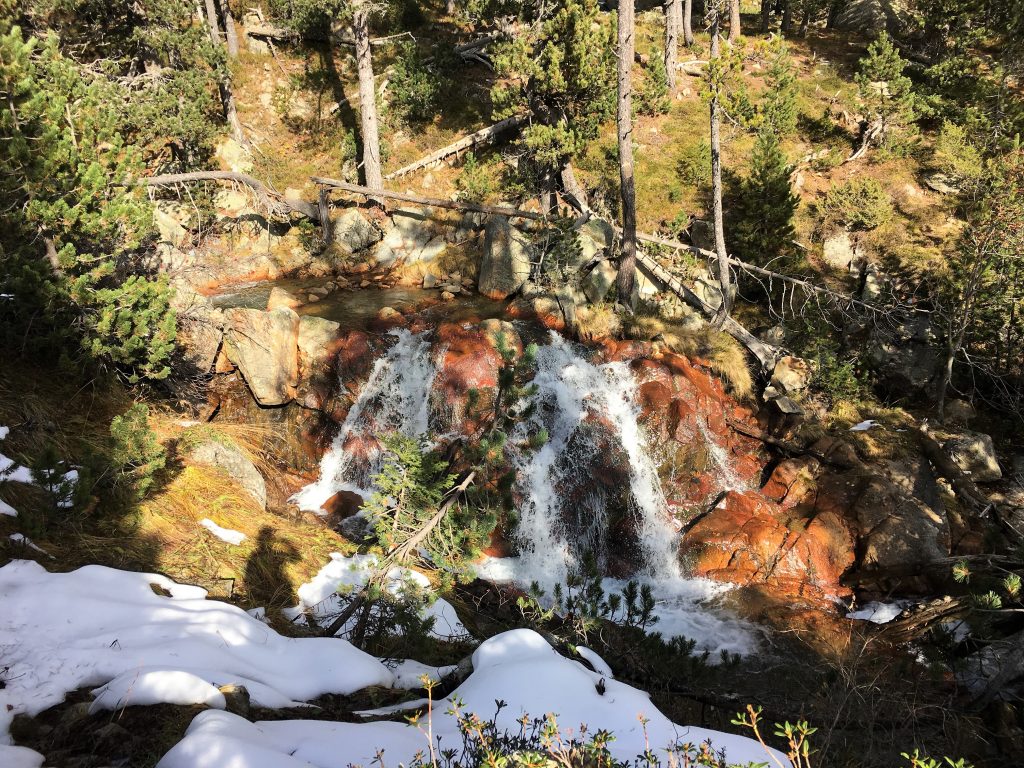 The rust coloured iron bearing rocks in the river

More steep slopes then took us up to the plateau below the lakes where once again we had to cross the river, here it was snowy but passable and we could see our route onwards would take us up the rocky cliffs to the north. A waterfall teased us with distant views but we never reached it. The signpost told us it would be an hour and a half to reach the topmost lake that was only about a kilometre on the map,  sure enough it was a steep and strenuous walk. 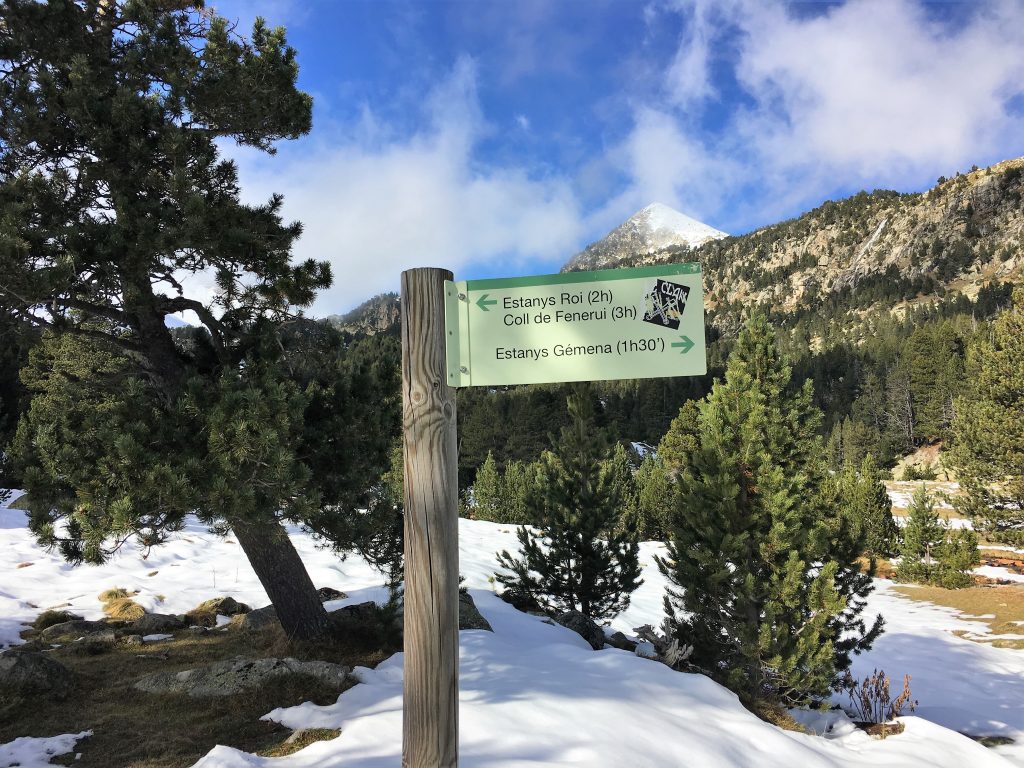 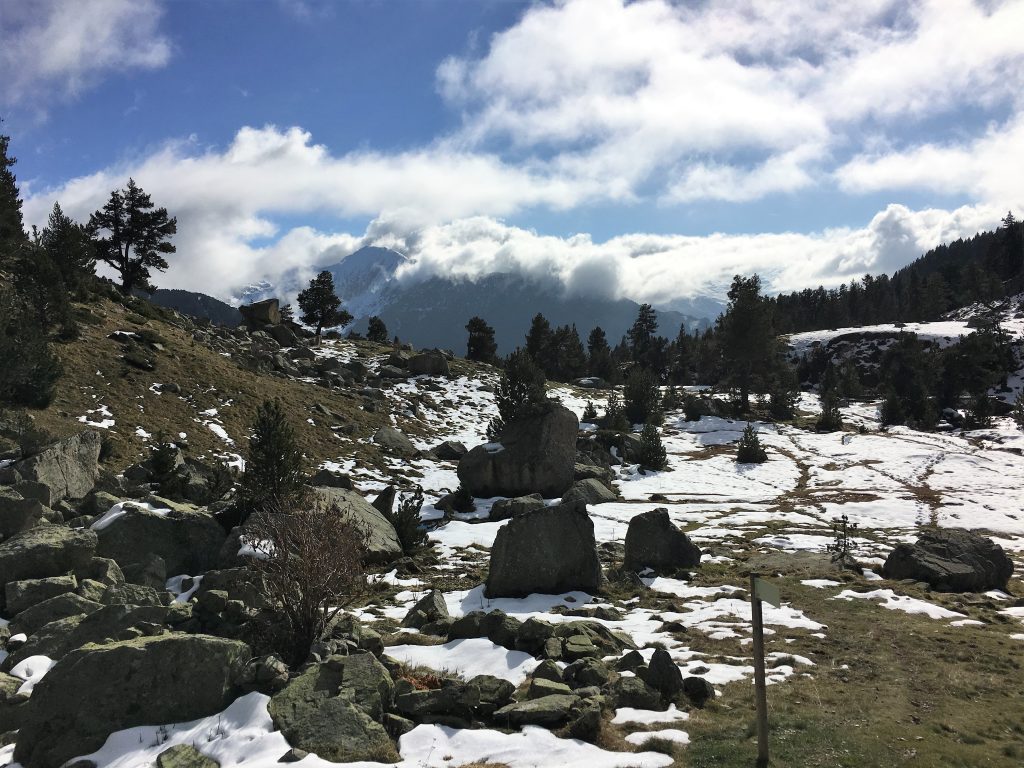 The plateau was a welcome relief from the steep climb

When we emerged by the lower lake we were in a beautiful cirque with snow all around and the water partially frozen. Our route took us around the lake and then up a step in the valley to the next lake where we ascended the side of the valley to get a seat with a view. From here we could see mountain peaks for miles, a beautiful view between the clouds, we are really going to miss this. 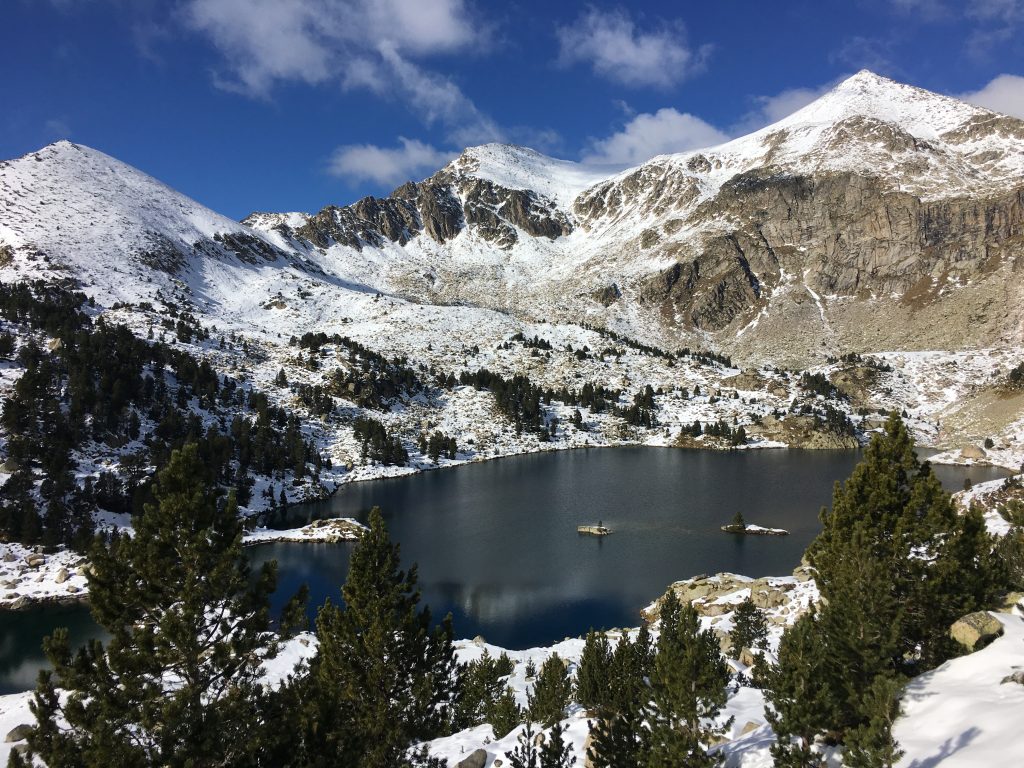 View over the lakes

We followed the same route back to Bertie. Only just over 10k, but we had climbed nearly 900m and it had taken us 5 hours. A tough walk but worth it for the views over the park.

That evening we left, driving southwards out of the park and out of the Pyrenees. Our parking spot for the evening was at La Pobla de Segur, a nice parking spot with services and electricity. But it wasn’t the mountains.

Walk to the Aigüestortes Plateau

Walk to the Gèmena Lakes