The Vall de Boi is the second major entry point to the Aiguestortes I Estany de Sant Maurici national park (the other being Espot). The valley runs from south to north into the park and so we had to leave Salardu, drive west to Vielha and then south before we could take the road that would take us deeper into the mountains.

In Vielha we stopped to take advantage of their supermarkets, a quick trip to replenish supplies especially as our experience was that November is a really quiet month and many smaller shops and bakeries are closed. Vielha was a nice town and we might have stayed here longer if we hadn’t overshot our proposed parking spot by missing the turning and so ended up at an out of town supermarket. Rather than turn back we moved onwards, taking the Vielha tunnel through the mountains. This is a common route across the Pyrenees for many people who are heading to Spain. In these winter months very few actually stop here in the mountains, preferring to get to the sun as soon as they can. We saw a few British vans on our drive but still haven’t seen any parked up in the Spanish mountains.

The route into the Vall de Boi is well signposted and we followed the road northwards amongst some of the most vibrant autumn colours we have seen so far, from scarlet to deep chestnut brown. Just south of Barruera there is a motorhome service point and we stopped to empty and refill. Only to find that the water was turned off. At least we could empty the toilet cassette, using one of our spare water bottles to provide a bit of a rinse. We considered parking here but we really needed to get some water on board, plus the service area has a very strange rule of no daytime parking. Only parking between 8pm and 8am, perhaps a way of ensuring that people move on. 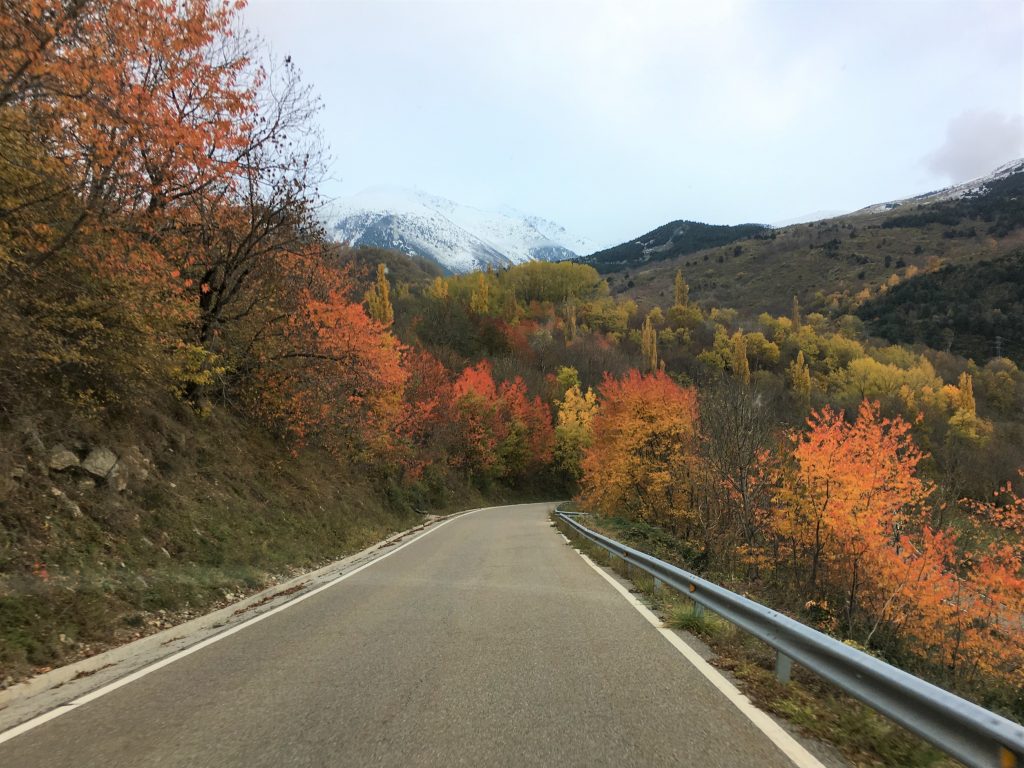 With a little investigation we discovered that there might be water at Taüll, a little further up the valley so we popped up there to investigate. There is an area of mixed parking with open public toilets, but the drinking water tap in the play area is off. We parked up and wandered into the village where we find a tap near the church that is working. A couple of trips backwards and forwards with our water carriers and we’d topped up enough for the essentials (cups of tea).

Because Paul wasn’t in the mood for walking we decided to drive Bertie further up the valley to the ski area of Boi-Taüll. On the way we spotted a couple of information posts for walking and snowshoeing trails and popped out of the van to take a look. 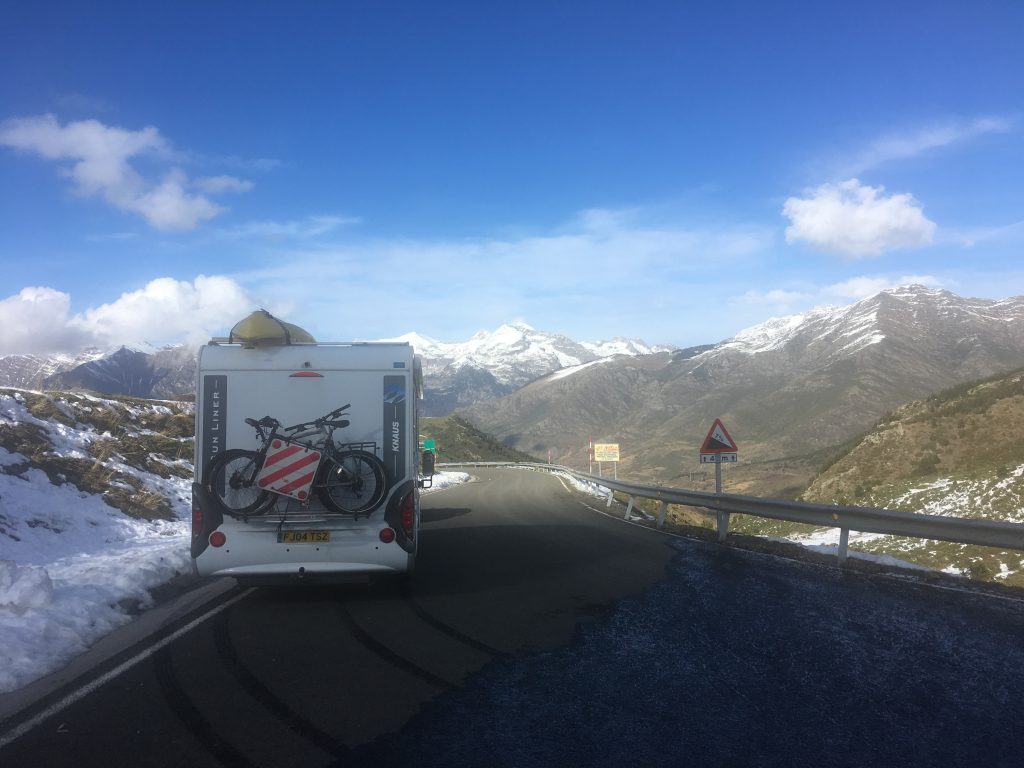 Stopping for a look around near the Boi-Taull ski area

The ski area parking was closed though so it was back down to Taüll for the evening. We wandered around the village where two churches vie for the title of prettiest Romanesque church. The curved stone buildings and perforated bell towers look like they’ve been directly transplanted from Italy but are quite typical of the 11th century churches in the area. The frescos inside are amazing, although many are reproductions with the valuable originals preserved in museums. 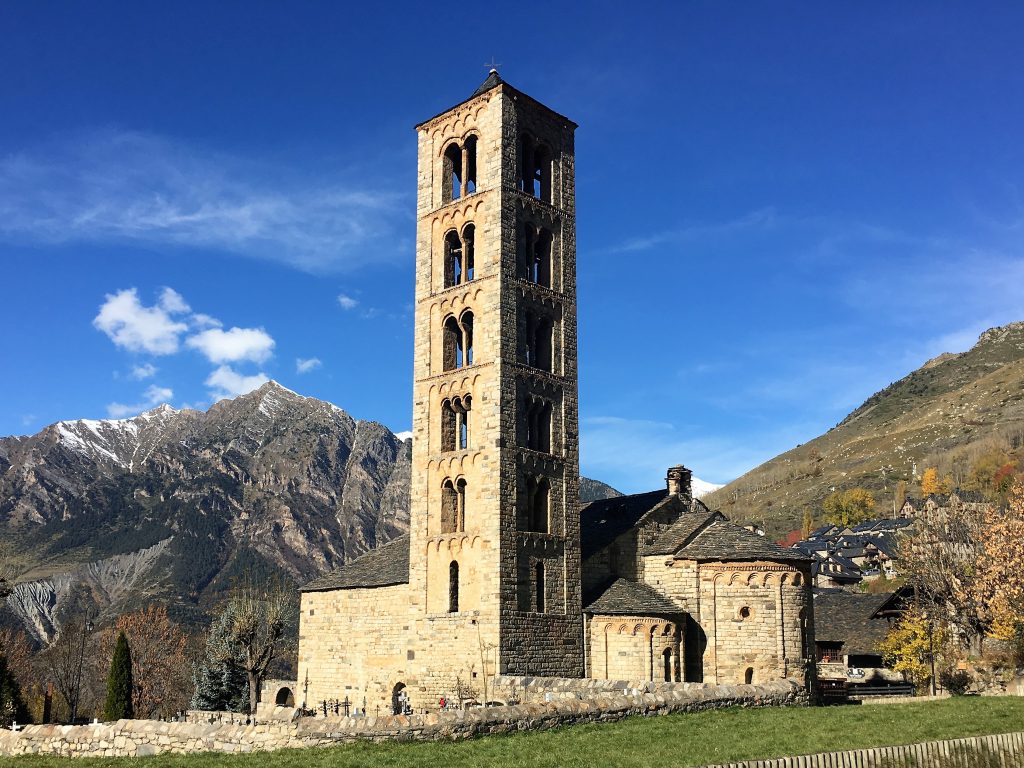 Sant Climent de Taull, one of three Romanesque churches constructed in the village, although Sant Marti was destroyed in an avalanche. 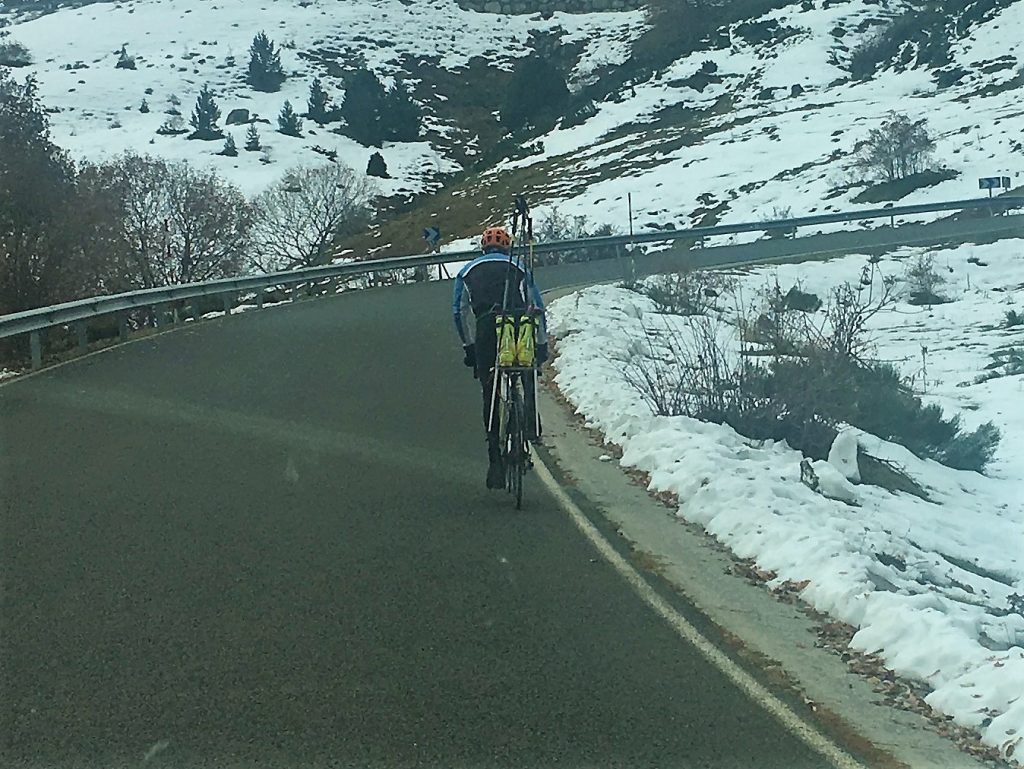 We saw this chap cycling up to the ski area, a clever home made ski and boot carrier on the back of his bike.

The following morning we drove back up to the ski area to walk the snowshoe trail that starts just below the ski area. There are two trails from here, a blue and a red, and we combined them both together to make a trail that took us to a couple of small tops with views over the hills and the ski area. On our way back it felt like it was raining, but actually they were running the snow makers. 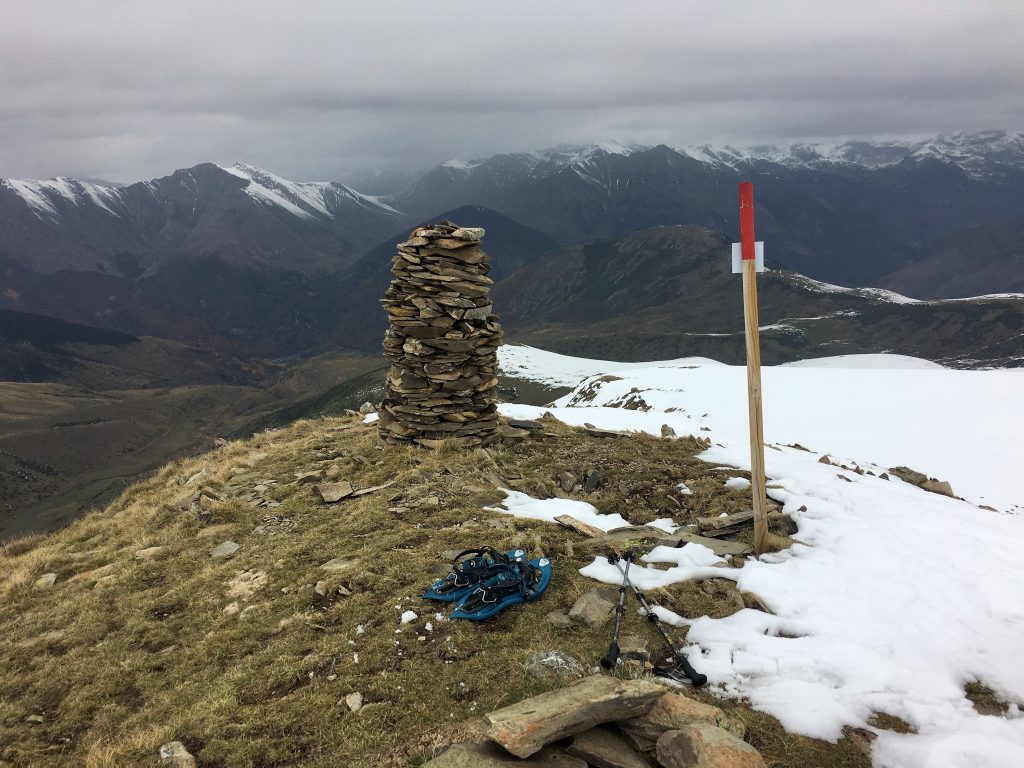 Views from the top of the snowshoe trail. The stark line between snow clad north and bare south facing slopes is evident.

On our way down the hill I feel a little unfulfilled, our snowshoe walk had been a pleasant but undemanding seven kilometres and I wanted to go a bit further. Paul didn’t have the same motivation but was happy to stop part way down the road at another trailhead where I could walk a short circular route up one side of the Riu de Sant Marti and back down the other. It’s not often I walk on my own and I felt a bit odd walking without company, but the walk itself was really nice. It started on a track that swiftly became a path climbing the side of the valley. The sound of falling rocks startled me at one point, but it was a deer running across the scree. There had been a little snow on the path up to the bridge, but heading back down the other side of the river on the north facing slopes the snow hadn’t melted and I had a few moments where I had to cast about to find the path, something that is a lot more unnerving when you’re alone, but at least I knew I could retrace my steps. 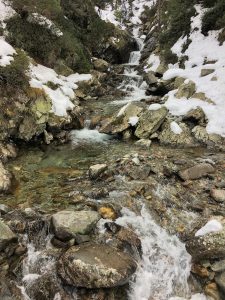 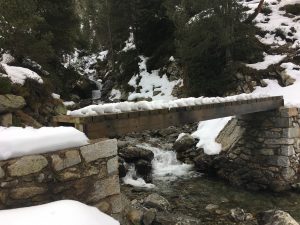 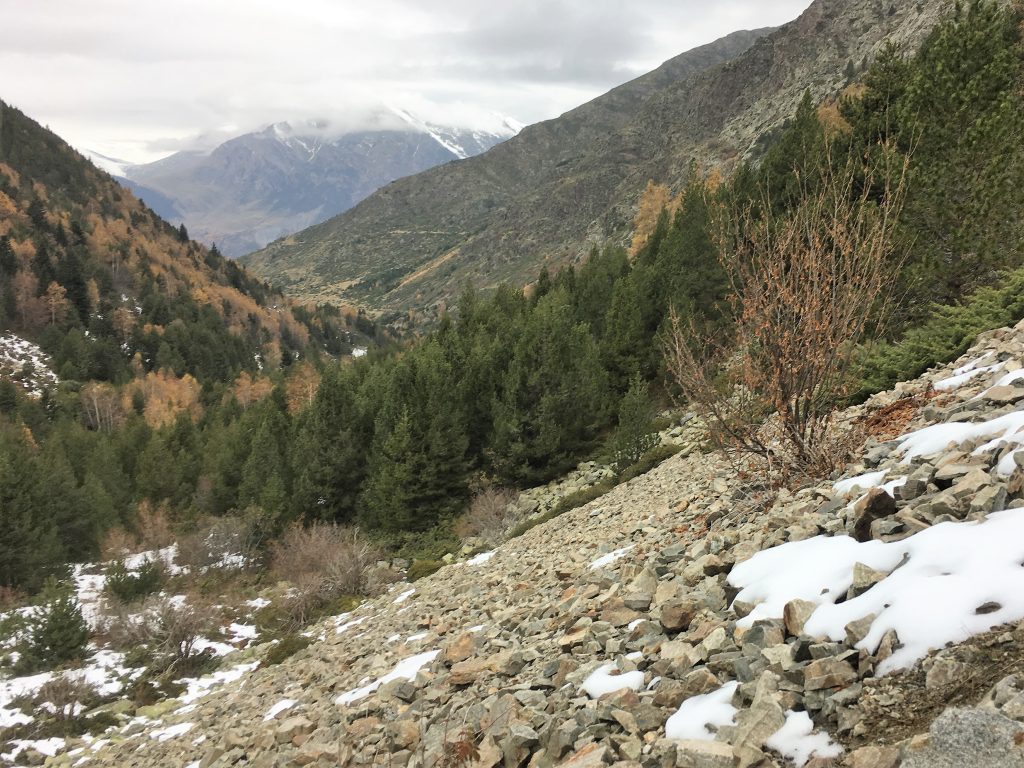 Views on my walk around the Sant Marti river

That evening we drove out of this part of the valley and up towards the Caldes de Boi where we would be spending the next couple of nights.