We woke up to a dreary morning at La Pobla de Segur and decided to move on rather than stay and look around the area. As the motorhome area is next to a park we had a quick leg stretcher before we left, joining local dog walkers taking in views over the large lake and across to the hills beyond.  Although we had left the main mountain ranges of the Pyrenees the terrain is still mostly hills and ridges and quite dramatic.

While we had breakfast we triggered the free electricity again to give all of our devices a final charge. There are two electricity points on the service tower and they are free, but they have to be triggered every hour as they are still on the same timer that would normally be triggered by a coin or jeton.

Our drive took us south east, we were heading towards Tarragona, our first touch on the coast. With the weather so dull we thought we might get there in one journey, but I took the opportunity of a long easily navigated drive to do some research and decided we should stop at Poblet monastery on the way. Before we got there though we passed through the Serra del Montsec and were taken aback by the dramatic limestone cliffs and the gorge of the Noguera Palleresa river. We stopped for another leg stretch and a gawp at the rock strata, caves and cliffs. The highest mountain here is 1676m, higher than anything in the UK, and yet I had never heard of it until we got here. Spain has got so many mountains and I feel a little guilty that I only know about the Pyrenees and the Sierra Nevada. As a comparison the average height above sea level of Spain is 660m, compared to the UK at 162m so it’s a pretty hilly country. We made a note to come back here some time in the future and do a tour of Spain’s less well known mountain areas. 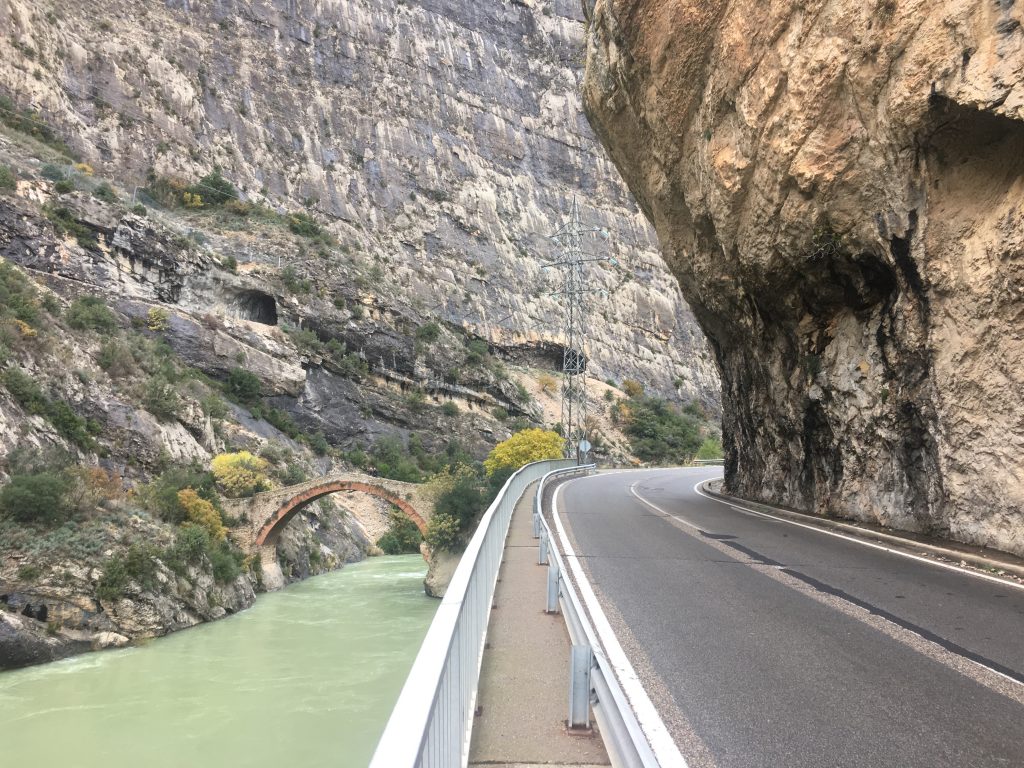 Dramatic gorge along the Noguera Palleresa 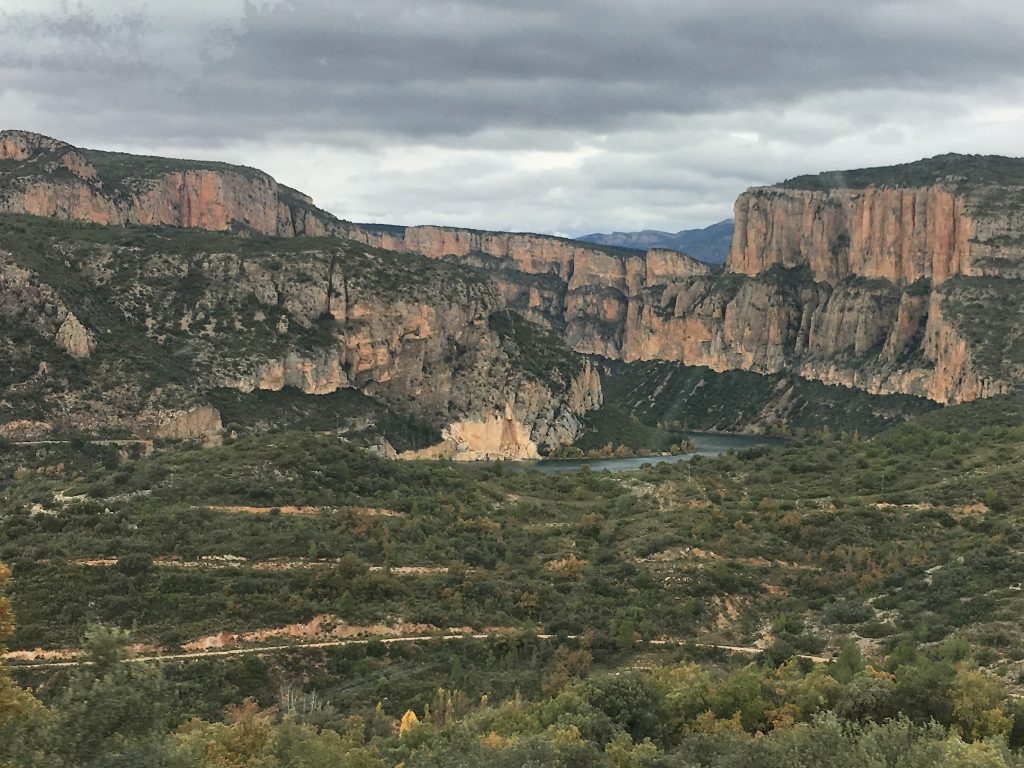 After our stop we continued following the river towards Lleida, the views were great and it wasn’t a difficult drive. Lleida was a point where we could fill up with fuel and pick up some supermarket goods before we continued to Poblet. It was also the point where we suddenly found ourselves out of the mountains and into agricultural Spain, surrounded by olive groves and almond orchards.

Poblet monastery has a large car park down some good but not overly wide roads in a very peaceful location amongst vineyards. Peaceful so long as you are immune to the sound of the bells regular chiming. They allow overnighting and we decided to spend the night and visit in the morning. If we had thought it through we would have gone to the ticket office that evening, but we didn’t realise that entry was on a timed basis and ended up having to wait nearly an hour. You have to go in and leave (they lock the gates) with a tour group, although you don’t have to actually follow the tour leader once you are inside. They didn’t have any English tours running while we were there so we payed our 8 euros (it’s 10 euros with a tour guide) and were let in with the Catalan tour. We had a handy booklet in English so that we could work out what we were looking at. Although we didn’t stay with the guide, he was a very proficient English speaker and was quite happy to answer questions when we were let out at the end of our visit.

The monastery itself is a UNESCO world heritage site. A large complex of austere stone buildings around a large church and beautiful cloisters. Alongside the original 12th century buildings and later medieval additions there are a number of modern buildings including a guesthouse. Despite being very obviously modern they blend quite well with the ancient complex. 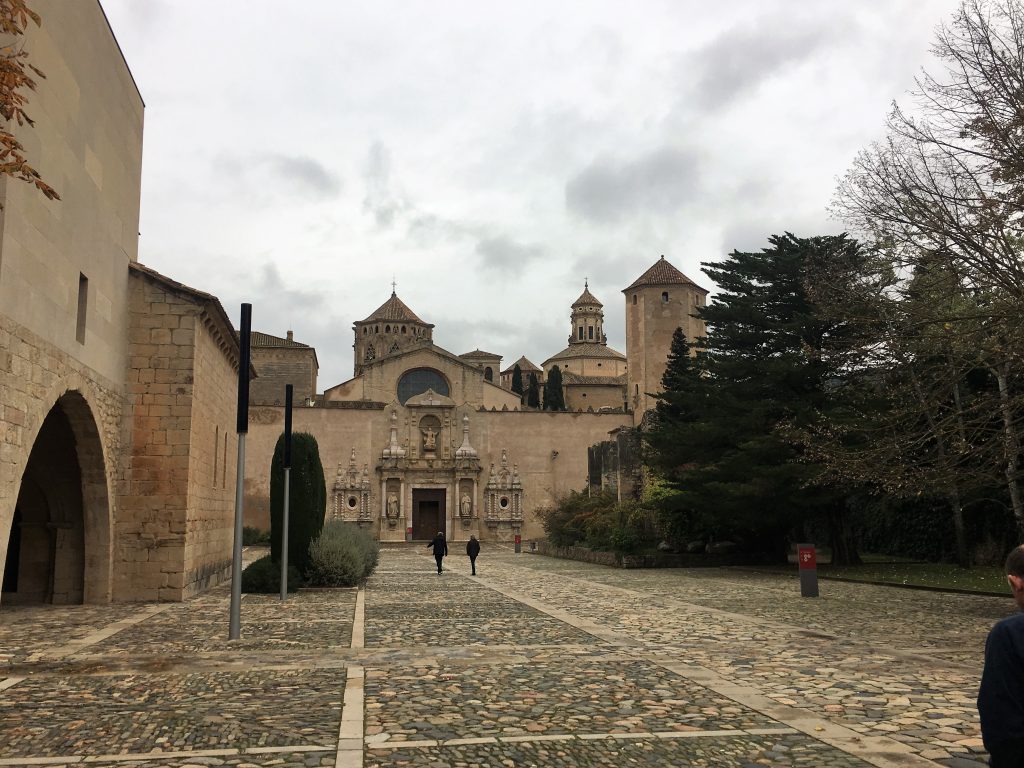 The outer courtyard, anyone can get access to these areas

There was a gardener in the cloisters while we were there, creating beautiful herby scents as he weeded and pruned. 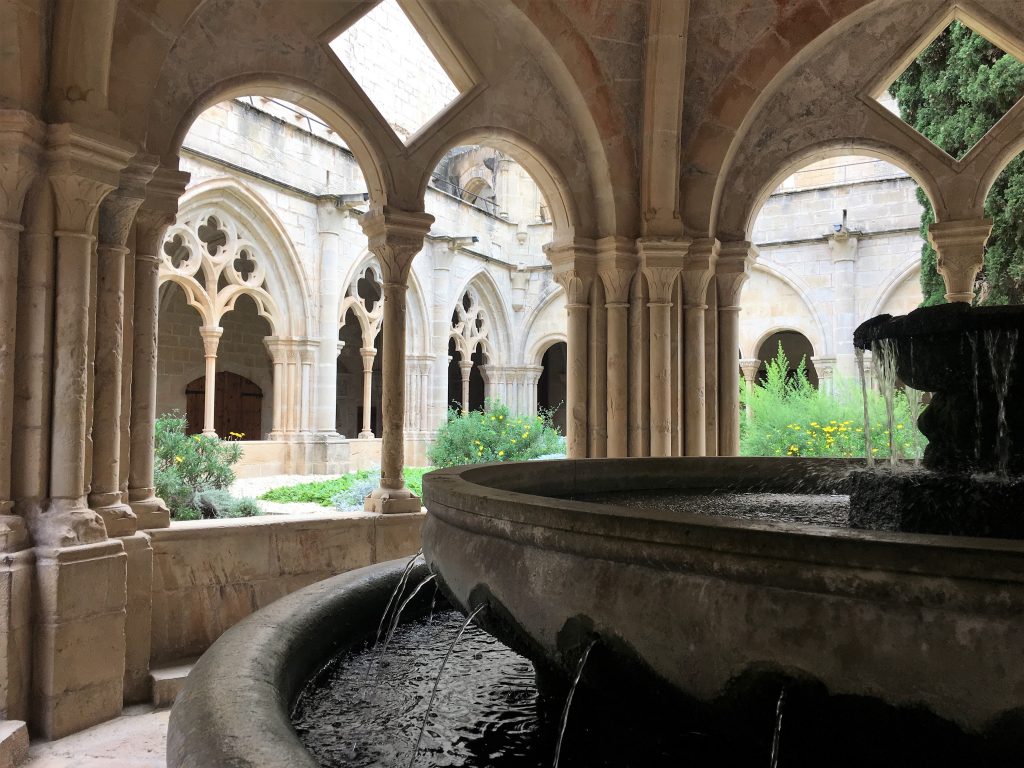 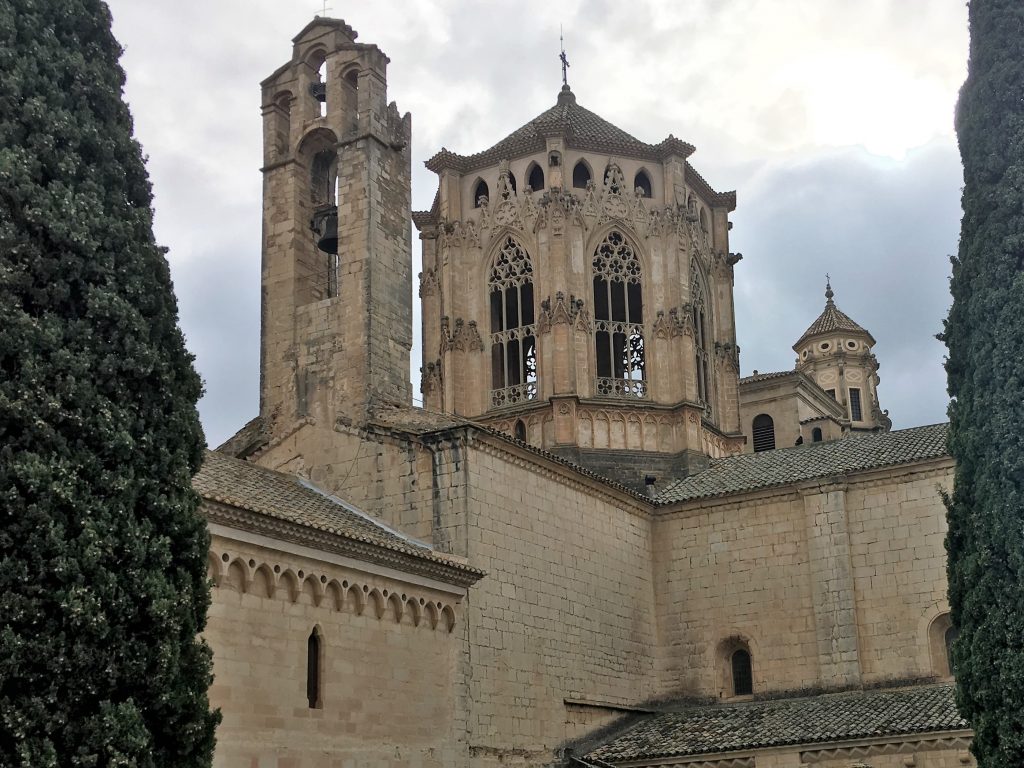 The church may be best known as the resting place for a number of medieval kings and queens of Spain and the tombs are quite splendid. 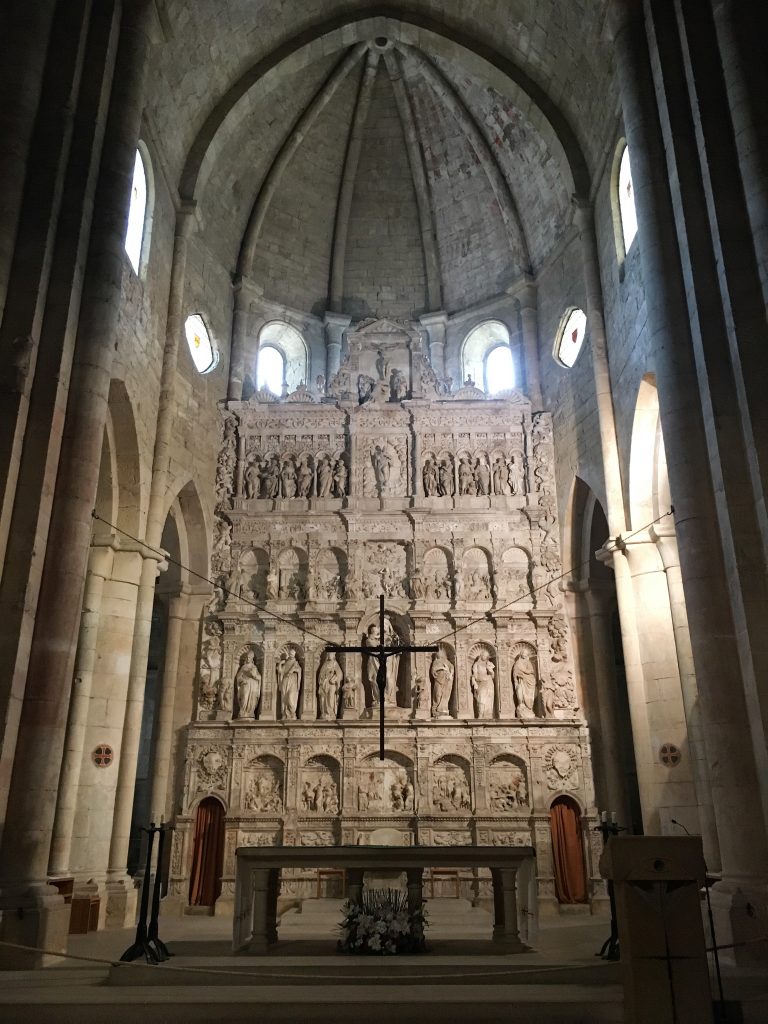 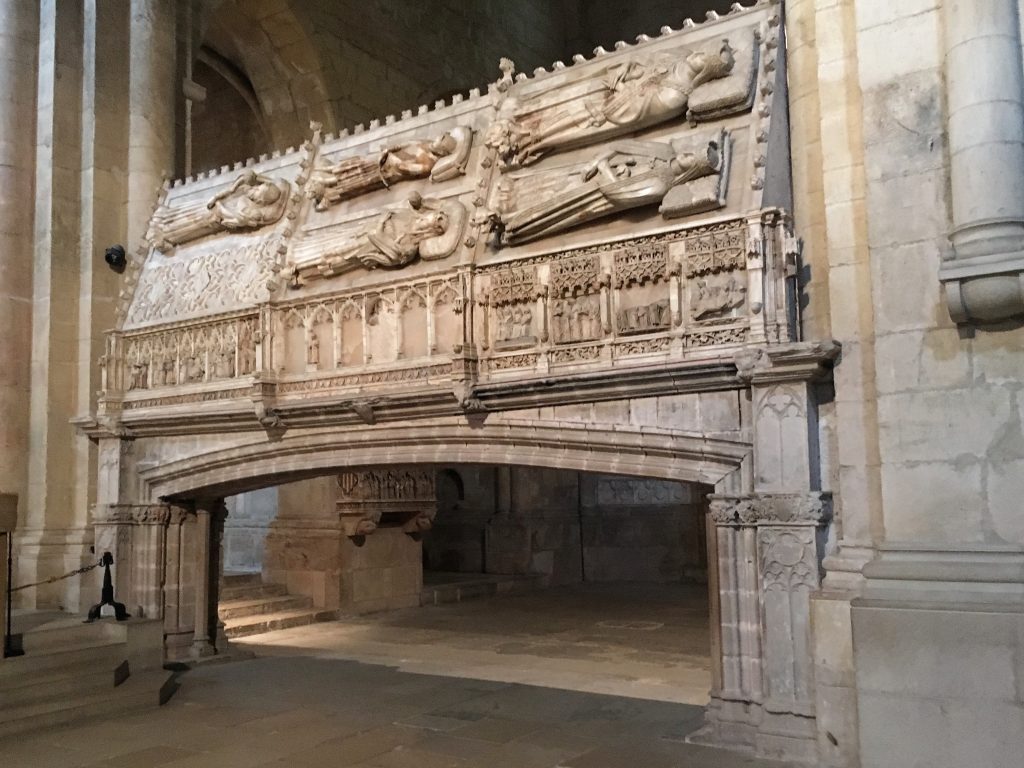 Some of the tombs of the kings and queens of Aragon

Possibly more interesting is it’s history. It was originally founded by Cistercian monks after the Moors were conquered in this part of Spain. It is said, although it was almost certainly propaganda from the supporters of the confiscation of monastic property, that the monastery became highly corrupt, only interested in increasing it’s wealth and luxury. Whatever the truth, after the Spanish dissolution of the monasteries it was abandoned, ransacked, fell into disrepair and plundered for stone by local people. It was only in 1940 that a group of Cistercian monks from Italy returned to Poblet and began the process of restoring the monastery, reversing the decline of the buildings and extending it to provide modern services. The work continues and a small community of monks live here, seen in  occasional glimpses as we took our tour.

We wandered around the inner areas, taking in the calm beauty of the spaces until the tour group were finished, the gates were unlocked and we were allowed back out. 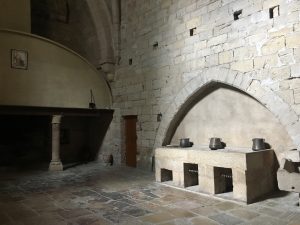 Kitchens with the large fireplace and serving hatches 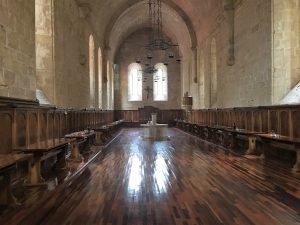 The well polished refrectory, the wood panelling is all modern 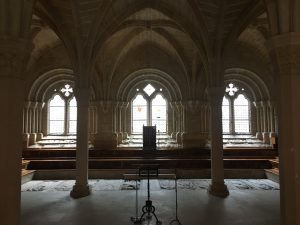 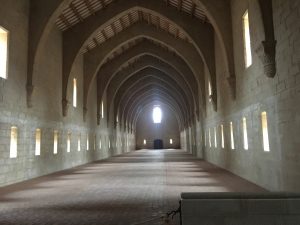 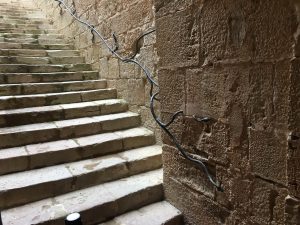 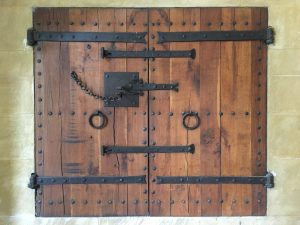 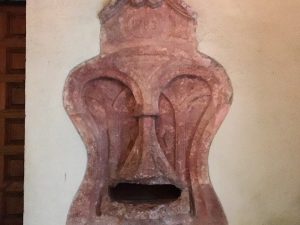 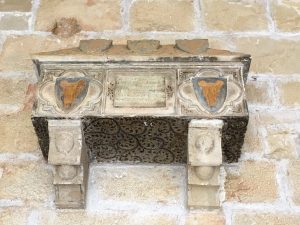 The remains of coloured paint