Tarragona is not all about ancient Rome, but the industrial port city on the shores of the Meditteranean was the earliest Roman city founded on the Iberian peninsular, so part of the draw for us were the Roman remains (affectionately known as ‘old sh*t’ by Paul) dotted around the city.

Our first Roman site was slightly outside the city, an impressively intact (and impressively free) aqueduct that hides in a park a few kilometres from Tarragona’s centre. We stopped here on the afternoon of our visit to Poblet, taking a stroll amongst the scrubby pines that are so typical of Spain’s coastal areas and wandering across and under the aqueduct. It’s a fine way to spend a couple of hours and if we both had working bikes we could have cycled from here into Tarragona city itself along a pedestrian/cycle track. 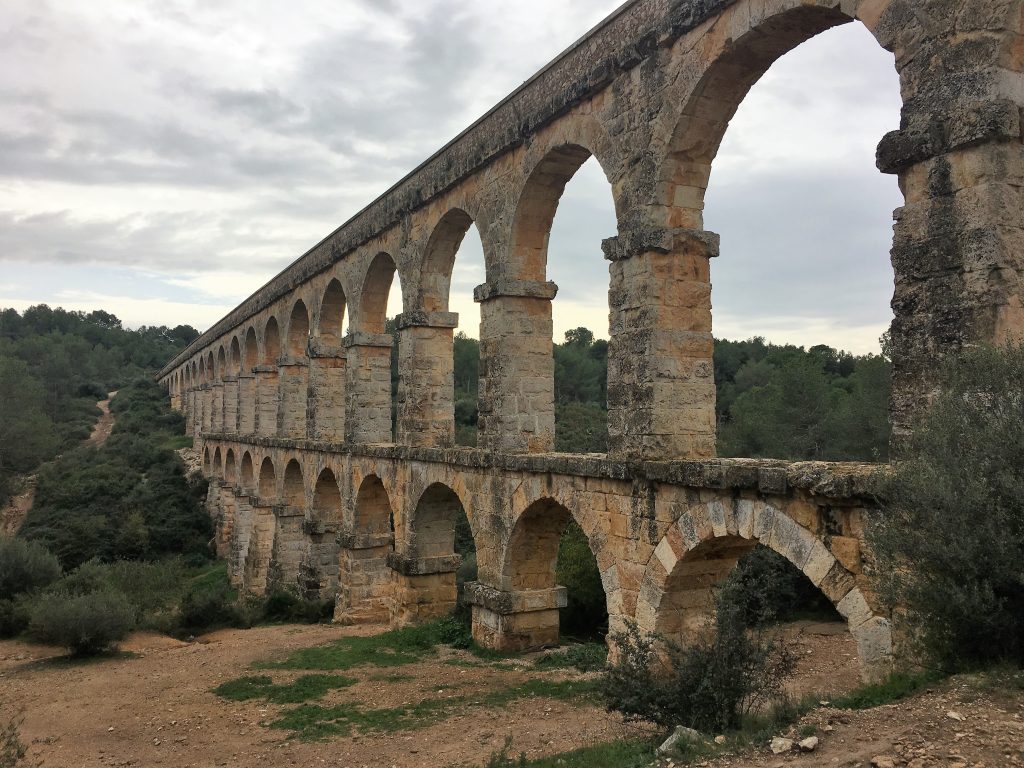 The aqueduct spans a dry valley 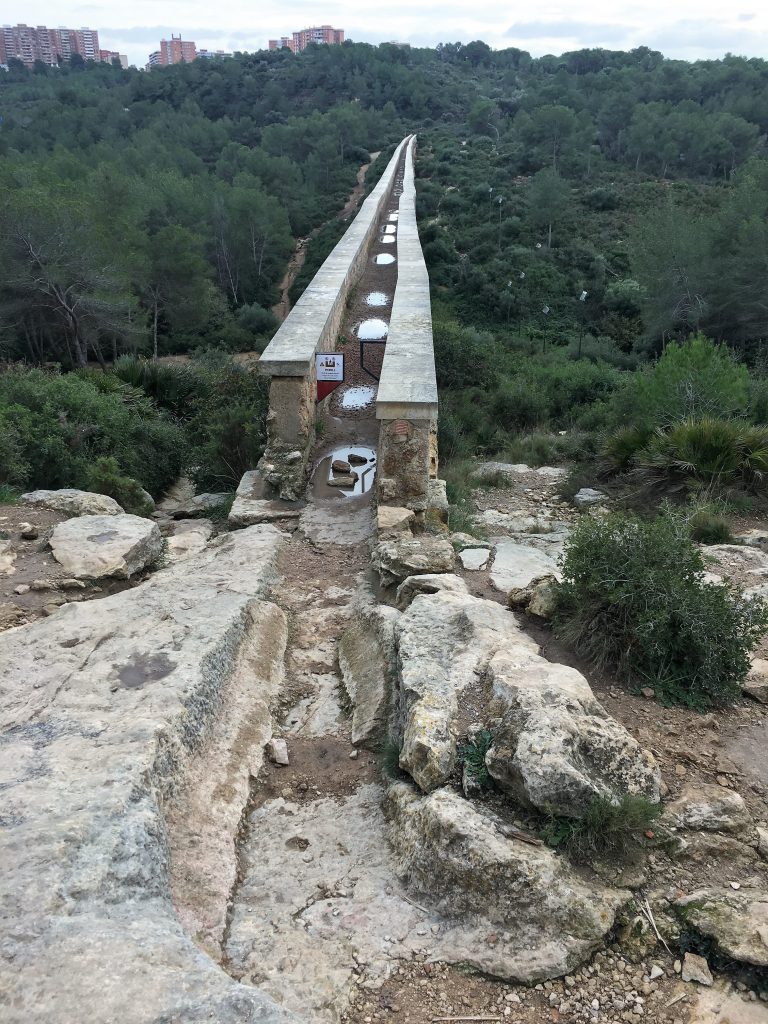 We had looked at some reviews of Tarragona’s motorhome parking spots and had dismissed them on the basis of reports of robberies and people being moved on. In hindsight we probably needn’t have worried at this time of year, but feeling a little cautious we decided to stay outside of Tarragona and use public transport.

Our chosen parking spot was in the town of La Selva del Camp where there is a modern parking area with services and free electricity. Oddly it doesn’t have drinking water, but this is being remedied – a tradesman and a local government employee (or so we judge by their sign written transport) were discussing the best possible site for the tap while we were there, we asked in our broken Spanish when drinking water would be available and the answer was ‘when you next visit’. It was the busiest motorhome spot we had been on to date with multiple nationalities parked up and all of the spaces taken by the time the final van turned up that evening (they doubled up with their friends on one of the generous parking spots). We spent the evening wandering the town and sussing out the time it would take to walk to the train station. It was back to Bertie for tea, after we’d visited a couple of local shops for some fresh veg and bread. We still haven’t got to grips with the late dining arrangements in Spain and so if we eat out it’s usually at lunch time.

The following morning we were down at the station with the commuters, I was a bit nervous as we didn’t have anywhere to purchase tickets, but as soon as we were on board it was evident that it was perfectly normal to buy tickets on the train. The conductor spoke Catalan to us and then switched to English which somewhat undermined my attempt to speak Spanish, but I did try. It’s not the speaking that foxes me so much as understanding the responses.

Tarragona is highly industrialised and our train journey took us past the petrochemical factories that sit behind the port, where smoke belched into the sky and a bright flame burned at the top of a chimney. Starlings queued along the wires and fences in their thousands silhouetted against the dull sky. It all looked a bit post apocalyptic.

The train arrived into Tarragona station without any Mad Max style mishaps and we were ready to start our wandering around the sights of the city. We walked up to the amphitheatre first, not much is left of the ancient Roman site, a few arches and terraced seating – some built and some cut into the natural rock embankment. Although you can see most of it from the outside we had decided we would pick up the MHT (Museu d’Historia de Tarragona) ticket that would provide access to Tarragona’s main Roman sites as well as a few other places. It was only €7.40 each which seemed a small price to pay. 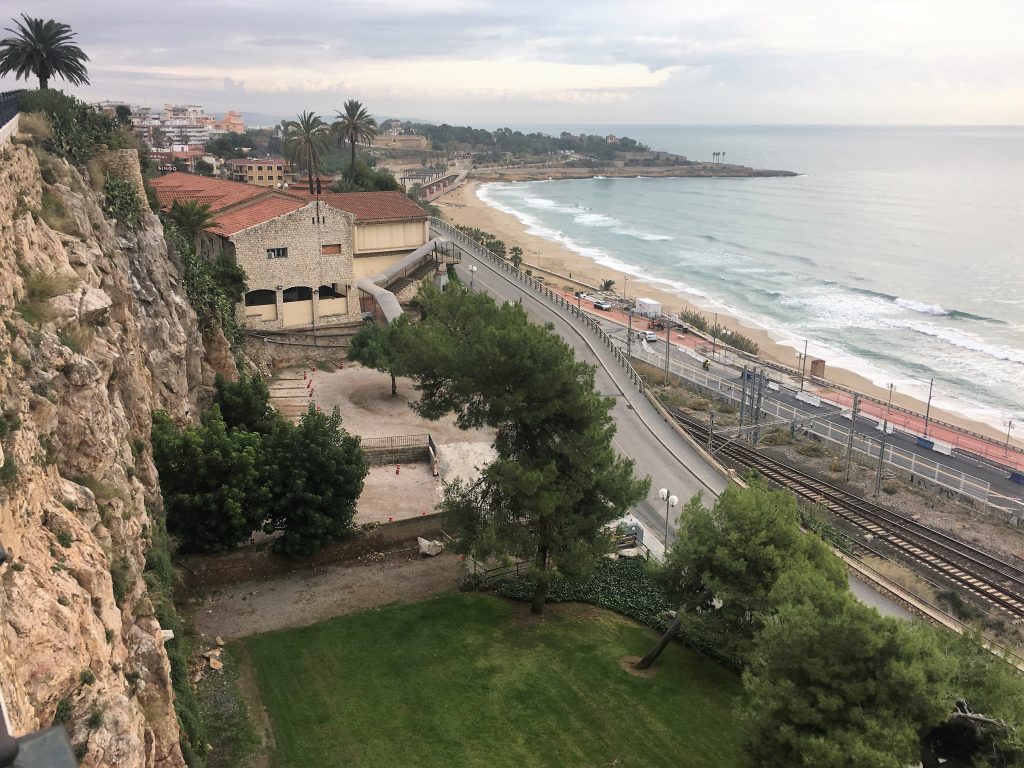 View from the Balcony of Europe 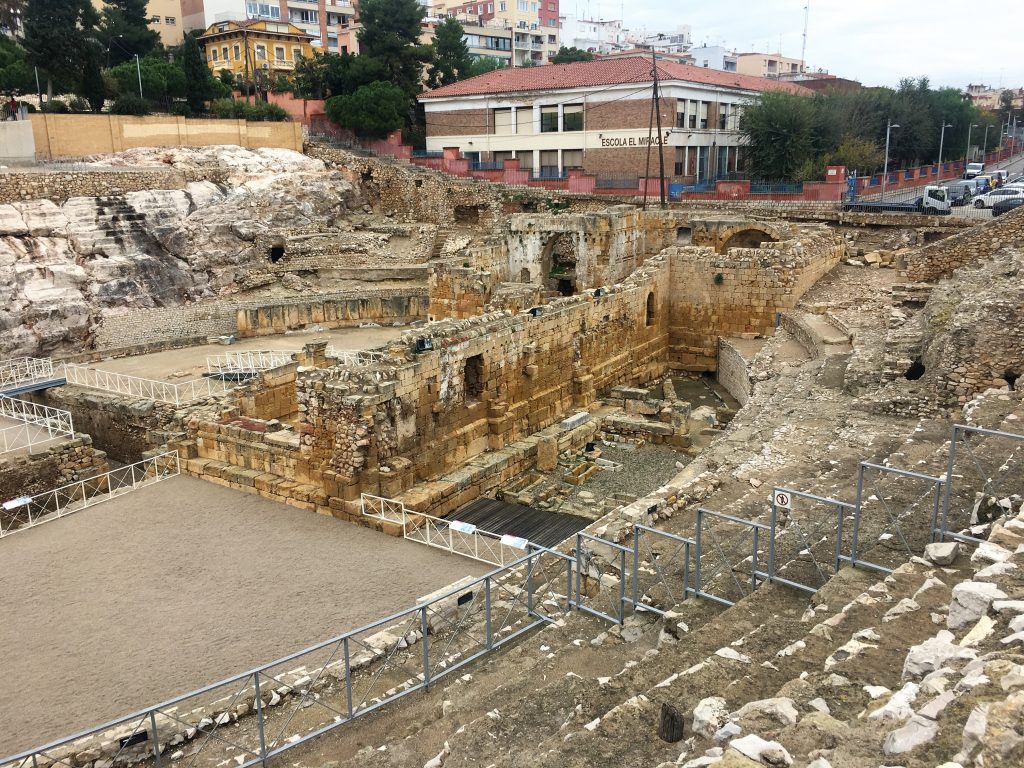 The remains of the amphitheatre – the remains of a church is slap bang in the centre of it. You can also see the seats carved into the cliff on the far side.

We wandered around, using a tourist map provided by the amphitheatre to help spot bits of Tarragona’s past dotted around the city, a bit of a wall here, some arches and colonnades there. In fact that was one of the most interesting aspects of the city, the way that you can see how the city built up around and on top of it’s historical buildings, using them for building materials (the amphitheatre) and for refuse and drains (the long vaults of the circus). With the ticket we visited the Muralles – the Roman walls, later developed as defences against cannons – the Praetorium – which was repurposed as Medieval castle and has amazing views over the city – the Circus – where chariot races were held by the Romans and now partially hidden under 18th and 19th century houses. There was an excellent short animation in the vaults of the Circus, showing the location of the Roman buildings and the way the layers of the town had built up over the top. 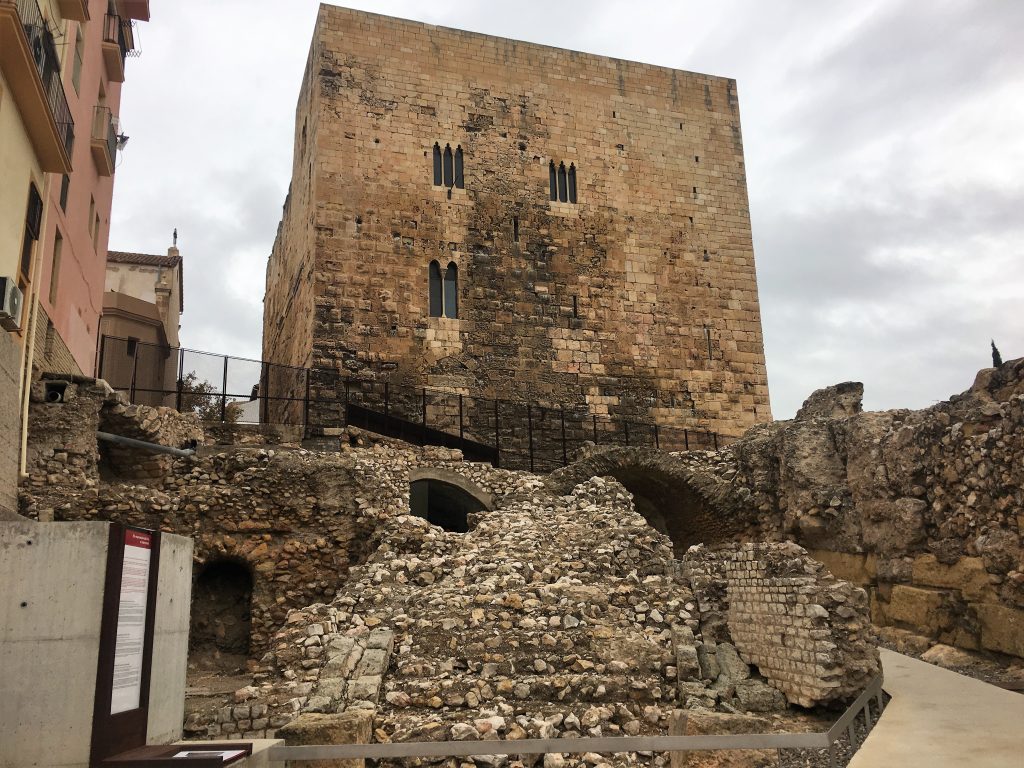 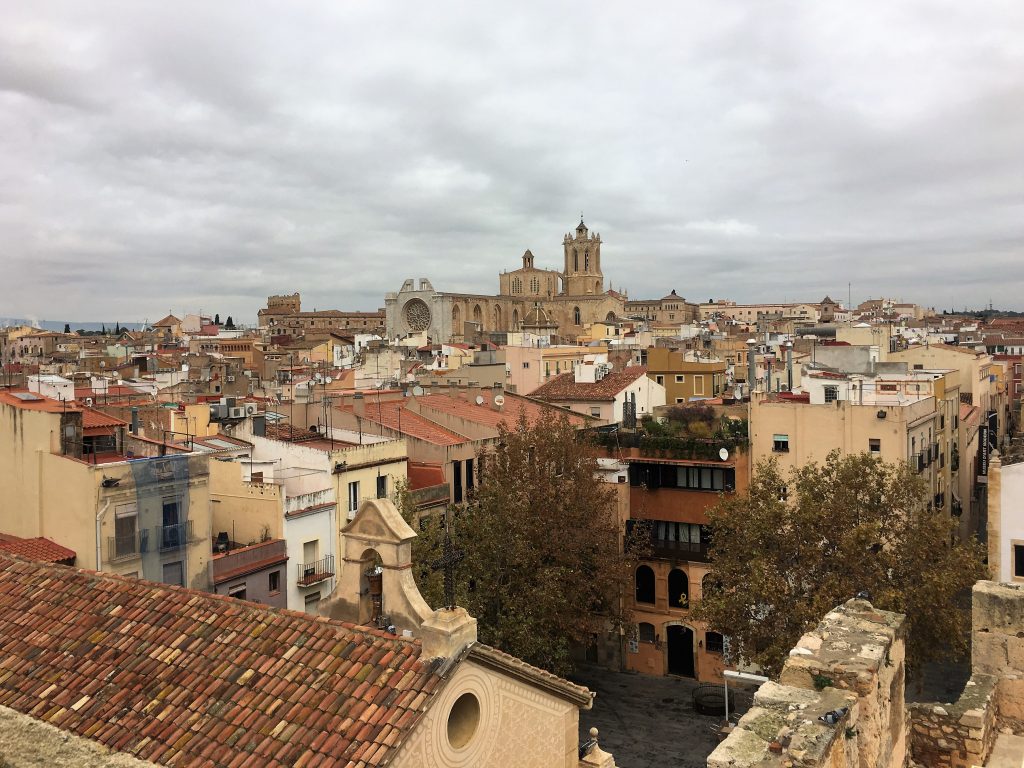 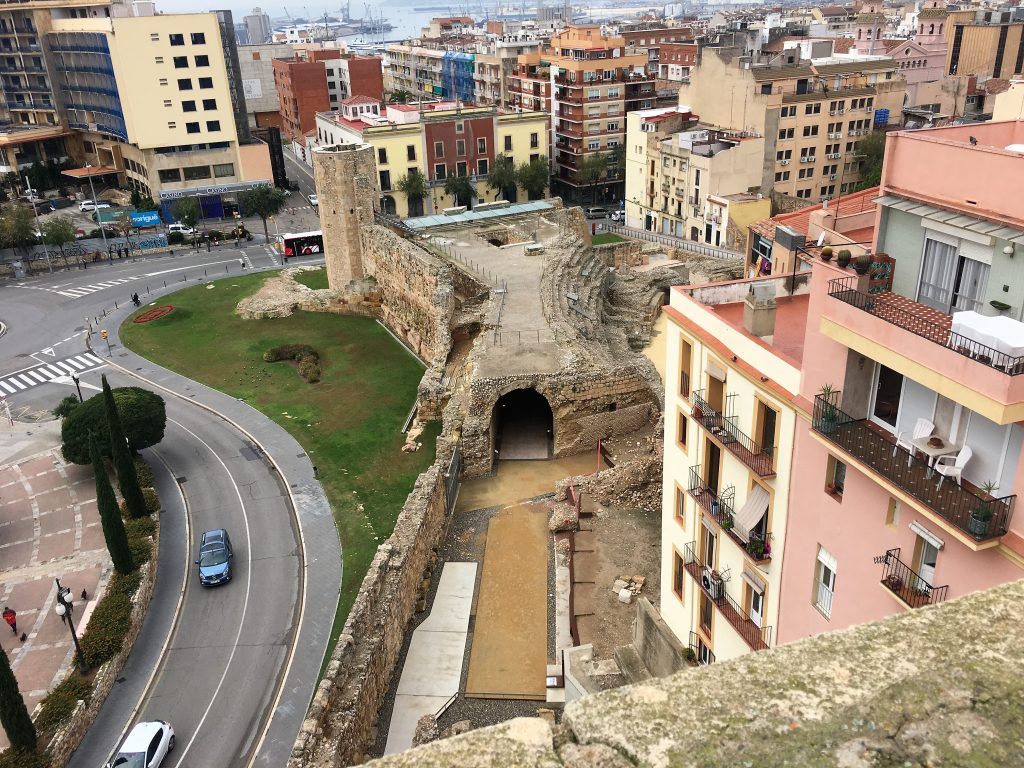 View of one corner of the Roman Circus 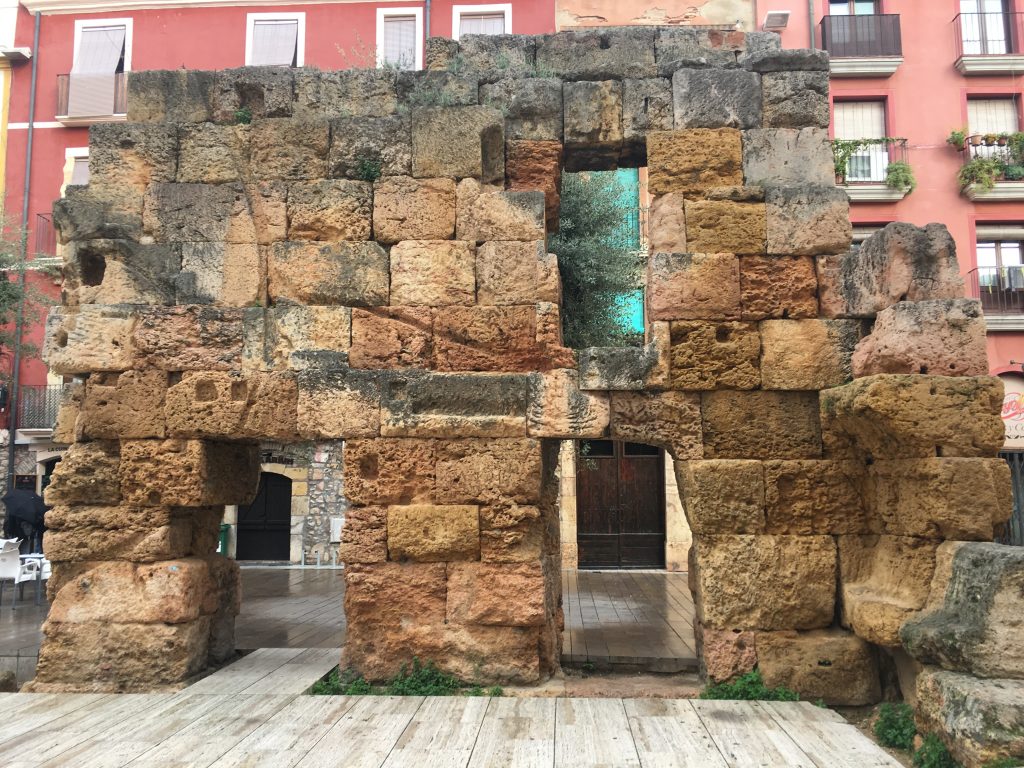 Remains of the Roman Forum in one of the town squares 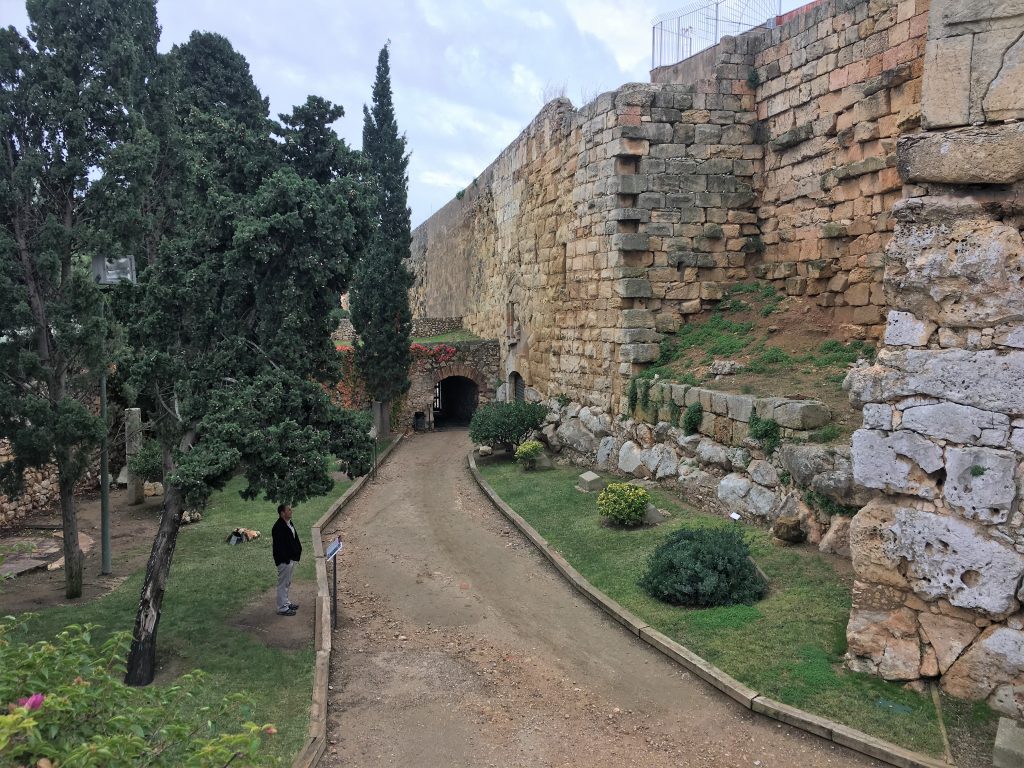 City walls with many layers. The really large stones at the bottom are Early Roman, followed by later Roman, medieval and 17th century additions 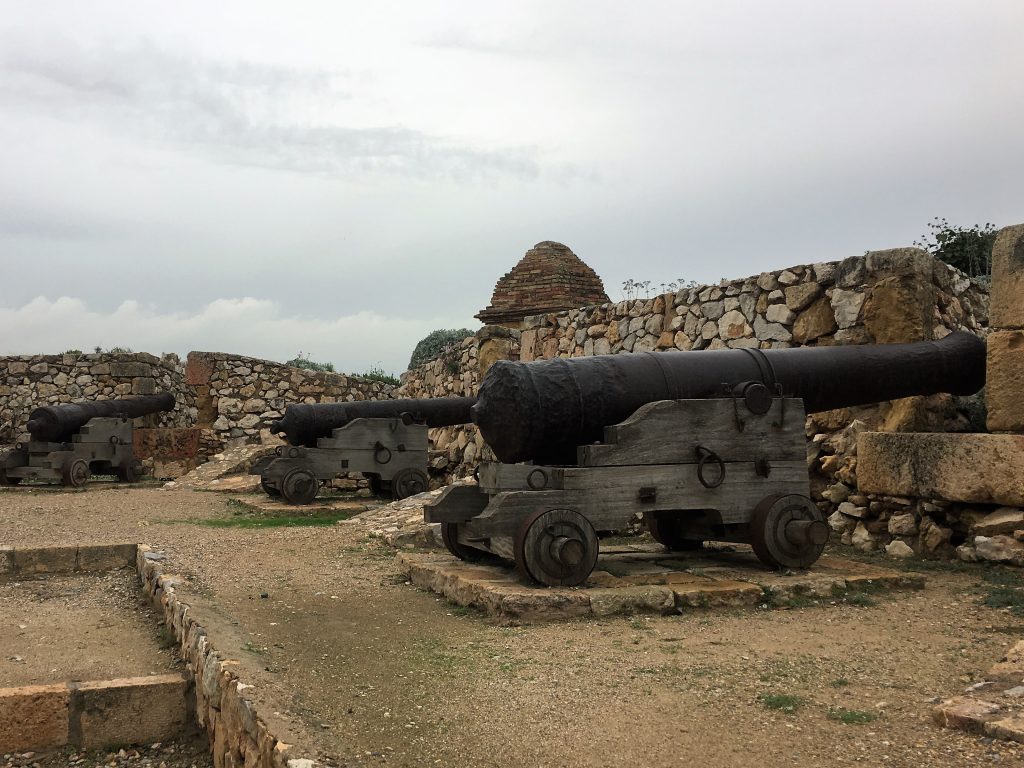 The defensive cannons were made in Scotland. They were used as mooring points for ships in the port before being recovered for display. 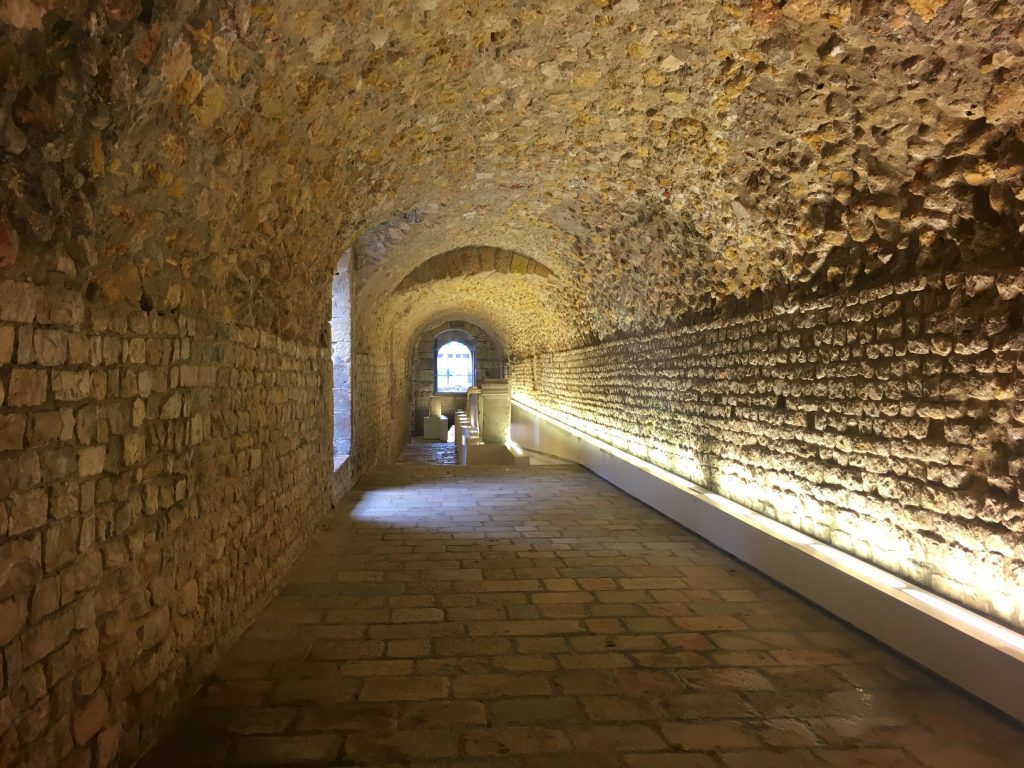 The long galleries of the Circus are mostly incorporated in and under later buildings. They were used for refuse and drainage before being cleared out by archaeologists (nice job!)

For a bit of something different we visited the free Modern Art museum which had an interesting collection of works by Julio Antonio, of importance to the city because he created a monument to the survivors of the Siege of 1811, a particularly horrific episode in the Peninsular wars. The final sculpture was controversial because of it’s classical nature (ie naked bodies) and it took some time before it was finally installed in the location it was intended for.

As well as the ancient stuff we wandered around the more modern areas where the streets are wide and clean. A statue of a ‘Castell’ stands on one of the main streets. Building human castles is something that Tarragona has taken to such extremes that it has UNESCO recognition. If you visit in the summer you can watch teams practicing in the lead up to the championships in October.

There is obviously a lot of development going on along the seafront to improve the pedestrian access and we wandered out to the Punta del Miracle to take a look at the beaches. This is also where one of the motorhome parking spots is and it looked perfectly safe and pretty busy.

Tarragona was great for a varied day in a small, industrious, city. We were tired but satisfied when we got back on our train to La Selva. The weather had warmed during the afternoon and heavy clouds were building over the hills. By the time we got back to the van it was a muggy moody twilight and before long we started to hear rumbles in the distance. The thunder and lightening storm that followed was pretty impressive, most people in the parking spot were in their vans, but we stood outside, joined by a couple of other Brits and watching the light show. Until the first fat raindrops started to fall and then we all raced inside again.

2 thoughts on “A Day in Roman Tarragona”