When we left the parking area at La Selva there was already someone waiting to take our spot. I really hope the local community gain something from having the motorhome parking there.

Our destination was a parking spot inland, provided by the cooperative Wine and Olive Oil producer Cellar Masroig. I am really quite uneducated about wine, I like drinking the stuff – particularly soft, easy drinking, red wines – but I don’t know much about it. I was looking forward to trying some locally produced wine rather than just picking up a cheap bottle from the supermarket.

The village of El Masroig sits near the border between the Priorat and Montsant DO regions. The main grape grown is Carignan, one I’d never heard of – and it’s not surprising as it’s rarely used to make a single variety wine. The lady in the winery explained that Carignan has high yields but has to be picked by hand, it’s main characteristics are high tannins, strong acidity and a deep colour. Not my sort of wine at all. When we arrived at the parking in the morning we saw people turning up with plastic 5 litre bottles which they were getting filled in the winery. It turned out that the wine they were collecting was pure Carignan wine and I insisted on trying it although I was told I wouldn’t like it. True enough it was too rough for me.

Fortunately for me the blended wines (using Grenache, the other key grape variety in the area) were much more enjoyable and I particularly liked their boxed Vi Negre. So I had to pick up one of those (I think I’ll be returning to pick up some more) along with some of their filtered olive oil and a jar of local honey. We didn’t do a tour of the winery, but the shop is very accommodating and has lots of samples of wine and oil available for people passing by. 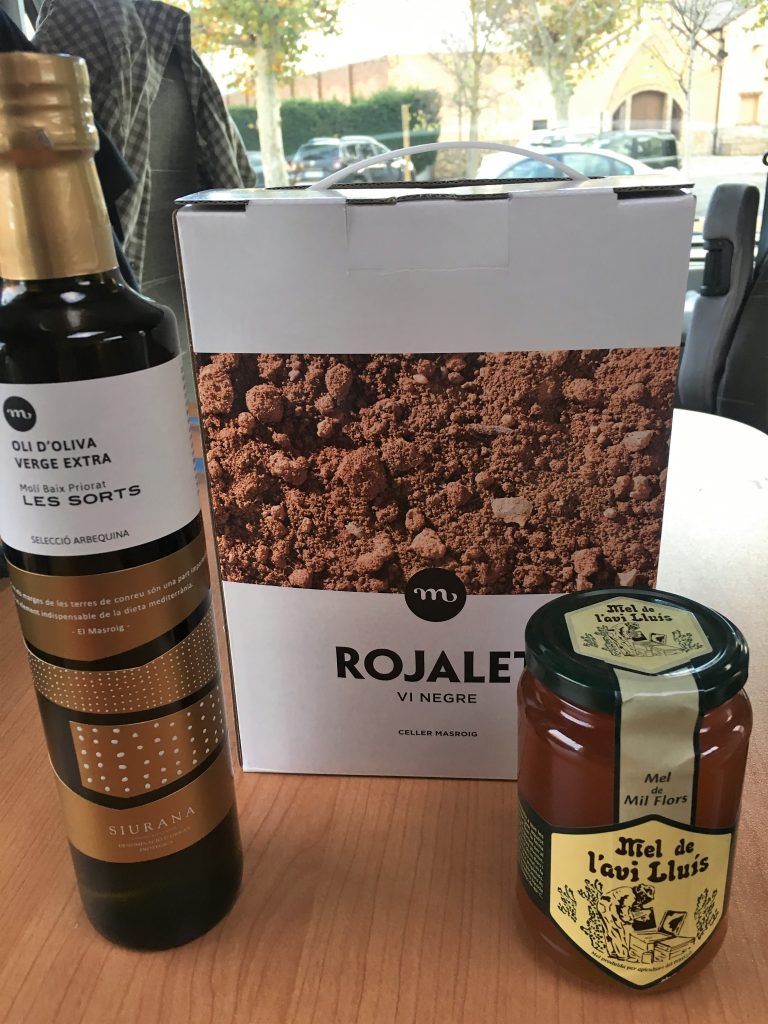 I was please with my little haul

We didn’t just come here for the wine, there is also plenty of walking in the area. So when we arrived, and before we even leapt into the winery, we were off on a hike through the vineyards and olive groves of the area.

We decided to do a walk that joined two paths to make a circular route. The only issue being the part where the paths joined, it looked like we’d be able to follow a ridge but we weren’t sure.

So we set out of the Northern side of the village on the Cami del Masroig y Bellmunt following a well marked track used by the local growers to access their crops. Although it was mostly dry, there was still evidence of the recent floods in the scoured clean barrancas. 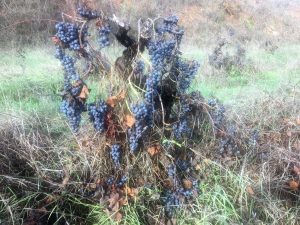 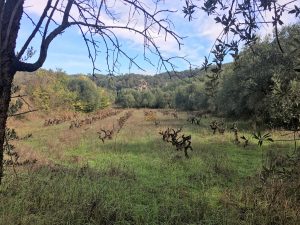 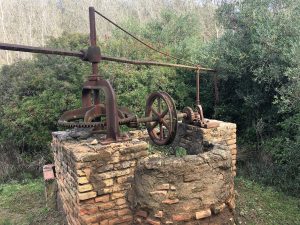 Old press amongst the olive groves 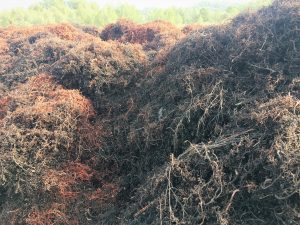 Lo Serrai is a small peak on the end of a ridge and we turned off the main path towards it (still signposted) and clambered up the friable rock to reach it’s summit. From there the marked path ended but we wanted to follow the ridge to the west and drop down to pick up the Puig Roig track. It took a few false starts before we found the trail along the top of the ridge. And it was good walking once we found it, but we were continually delayed by route finding. We knew that people had walked it – there was a wikiloc route along it (sadly the GPS info was incorrect) and we found small cairns along the way – but the top of the ridge was scrubby and there were multiple routes through, some ending on the edge of the cliff. 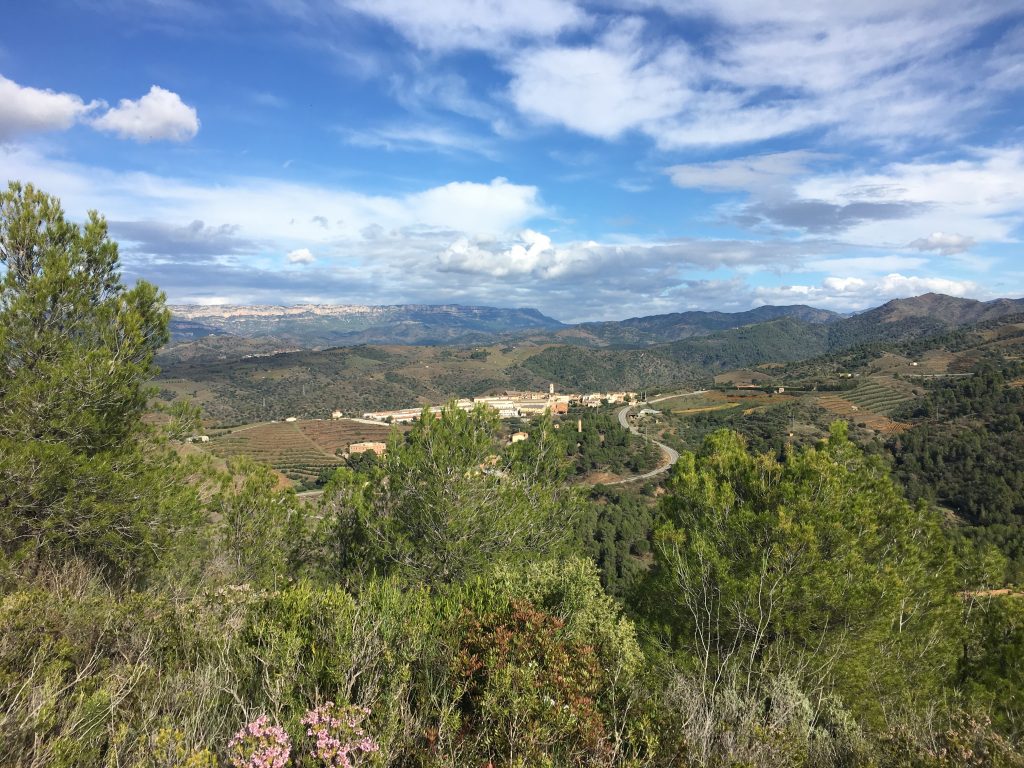 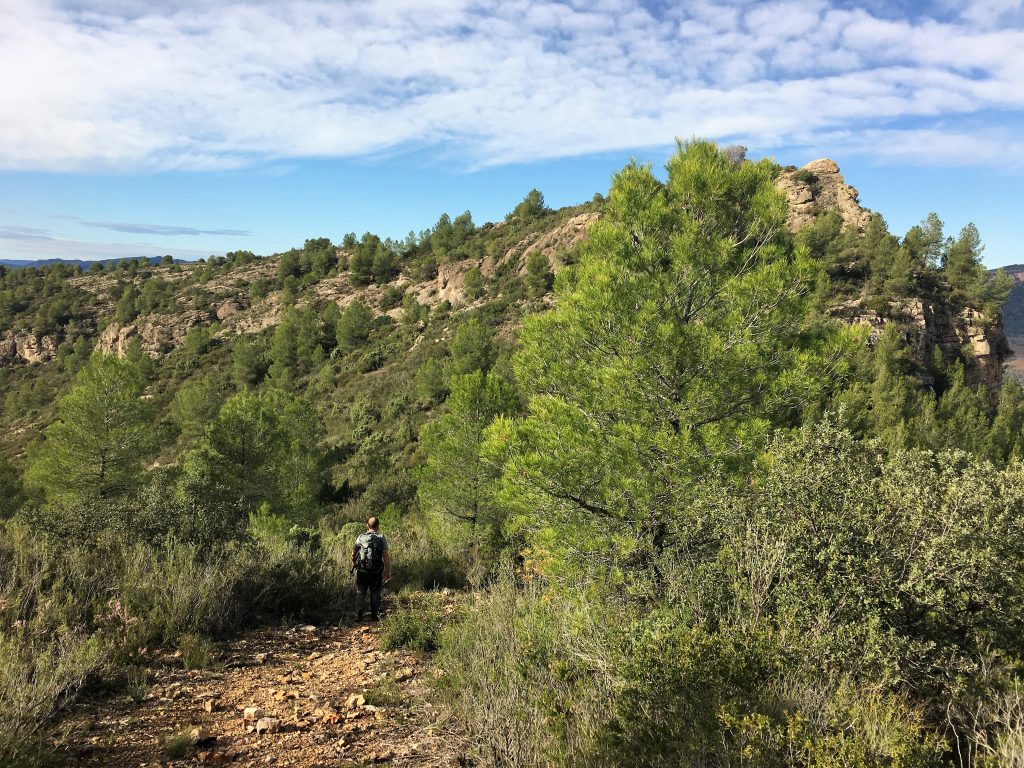 Lo Serrai and the ridge

Finally we started to drop down and the route became easier to find. We worked our way through a vineyard where the vines were clad in their autumn leaves and around a muddy Olive grove to reach the path to Puig Roig  By this time we were too tired (read frustrated) to go and visit the archeological site of Puig Roig itself, so once we reached the track (actually an asphalt road, but we didn’t encounter any motorised vehicles) we followed it back to El Masroig. 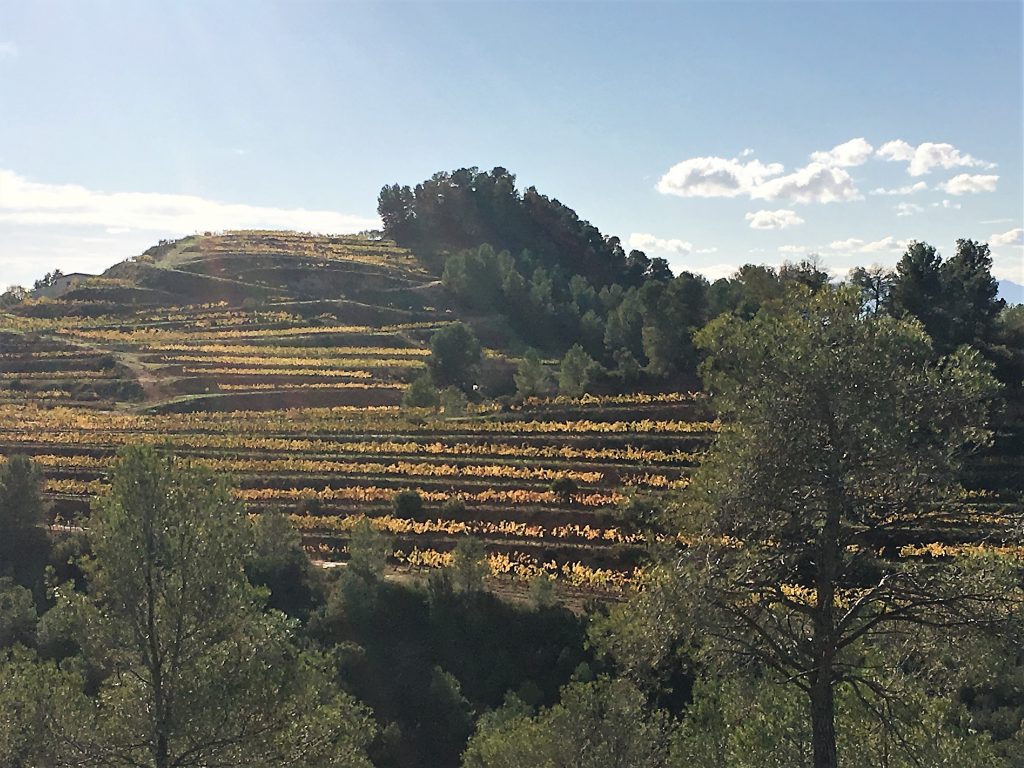 More vineyards, this time in their autumn colours

We stayed at the Cellar Masroig parking that evening in one of the six (I think) marked out bays for motorhomes and topped up using their free service point the following morning. It was a really peaceful night on the outskirts of the village.