If there’s one thing we have realised on our travels so far it’s that beach locations can offer so much and deliver so little. It has, I think, to do with the commercialisation of seaside locations and the resulting over development, often accompanied by the economic deprivation that accompanies such a seasonal and trend dependent economy. We see it in the UK, and even more so we have seen it in Portugal, Italy and Spain. And so our foray to the coast is accompanied by a little nervousness about what we will find.

Our first spot on the coast was at the motorhome parking behind the Castell of St Jordi d’Alfama. A tolerated motorhome parking spot (no services) right on the coast, in the area of the Tres Calas tucked between two of the three pretty sandy coves. It’s surrounded by villa developments of varying quality, many owned by ex-pats trapped in negative equity. It has that odd and peculiarly Spanish situation where one minute the roads will be beautifully newly laid tarmac and the next minute will be old rumbling strips of concrete. The route in took us on what looked like a service road under the railway and motorway before bringing us up in a huge area of parking which was already busy with motorhomes.

Despite it’s oddities it was a peaceful and rather beautiful place. The coastline is conglomerate rock, highly eroded, forming many small coves, caves and overhangs. The GR 92 route runs along the coast and is marked with red and white stripes, sometimes along the coast, sometimes clambering over rockfalls and sometimes back into the streets. We wandered north along this path until just before the power station and then wandered back again, stopping frequently to admire the crystal clear sea and at one point a snorkeler making his way around the rocks. 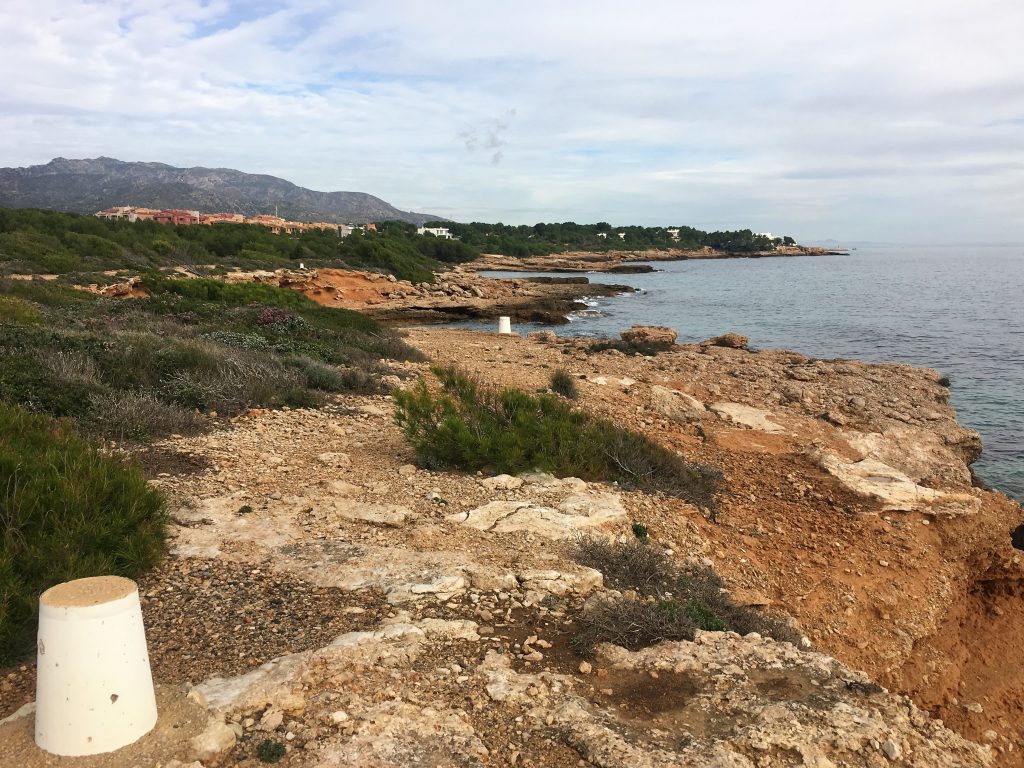 The white bollards are for coastal surveying. They replace the previous bollards, many of which are now in the sea 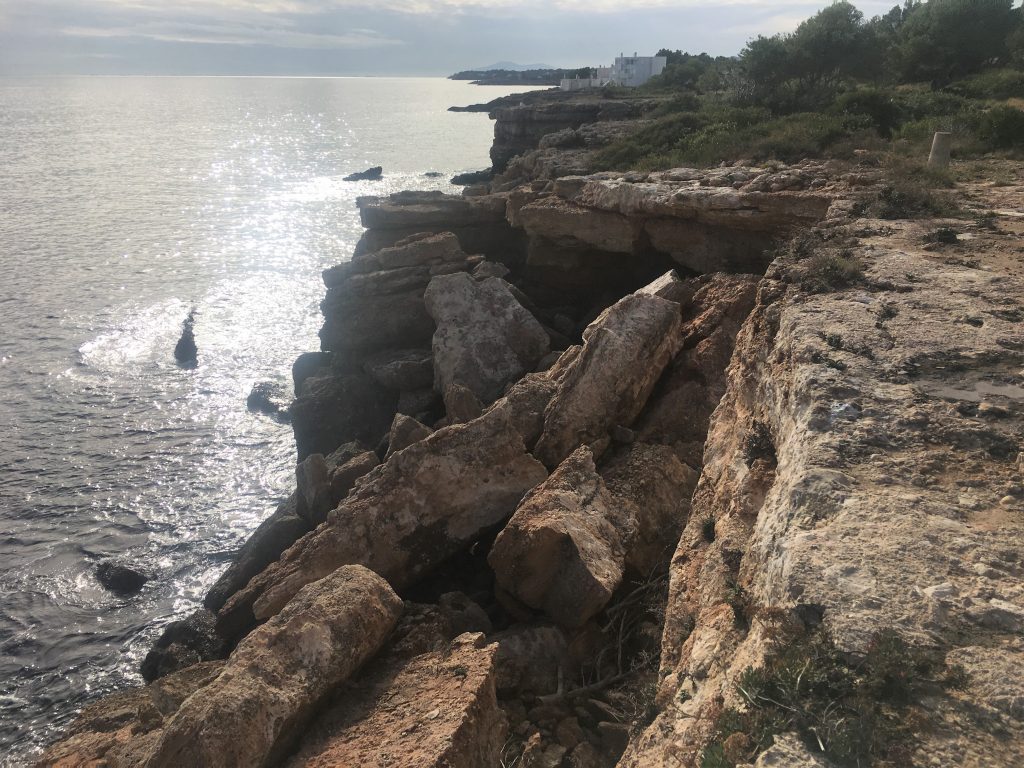 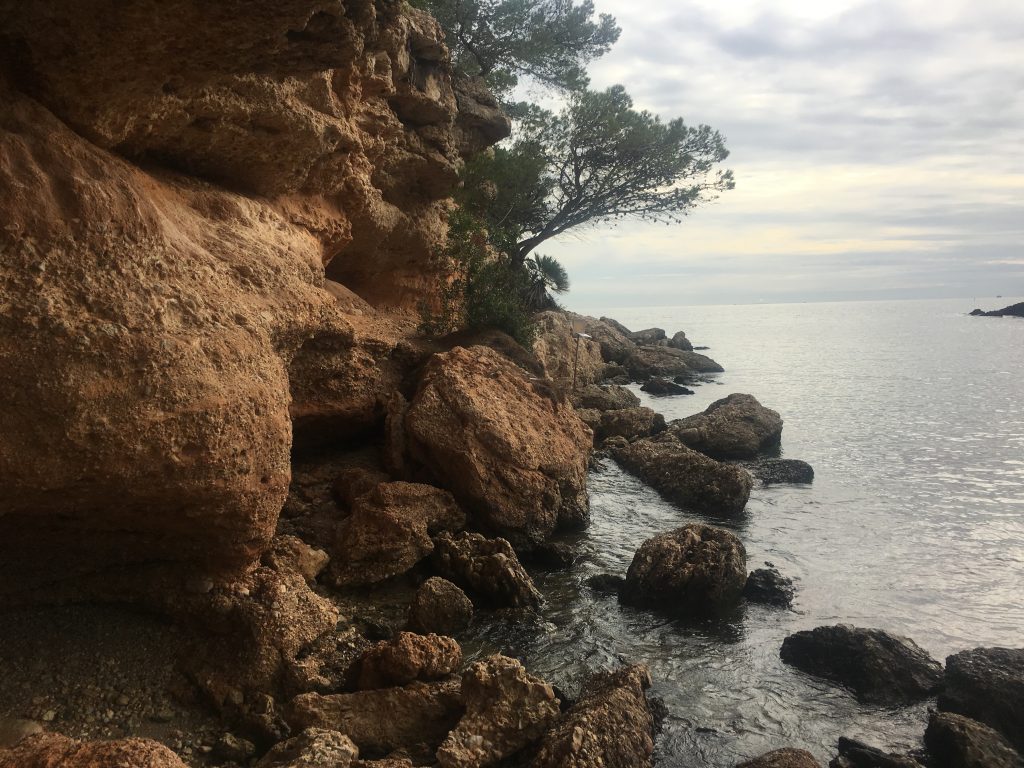 Our next stop was Peniscola (yes the name does engender a bit of a snigger). Last year we had stopped at Alcossebre, on the southern edge of the Serra d’Irta natural park. We had walked along the coast and seen the promontory of Peniscola in the distance. This year we finally made it there in the motorhome. We had high expectations, many people have talked about how beautiful the place is. Our view? Well the castle on a rock jutting out into the ocean is very scenic and it’s worth a ramble around the walls and the surrounding narrow streets. The views of the Serra d’Irta are beautiful and the way that the more exclusive end of town climbs in whitewashed steps up the side of the hill is attractive. Turn north and look at the beach and it’s high rise backdrop and it’s just another over exploited beauty spot. Perhaps we were in an unusually negative mood, but it just wasn’t somewhere we wanted to stay. We had paid to stay at Parking Els Daus – a fairly standard private motorhome parking spot – otherwise I think we might have just moved on. 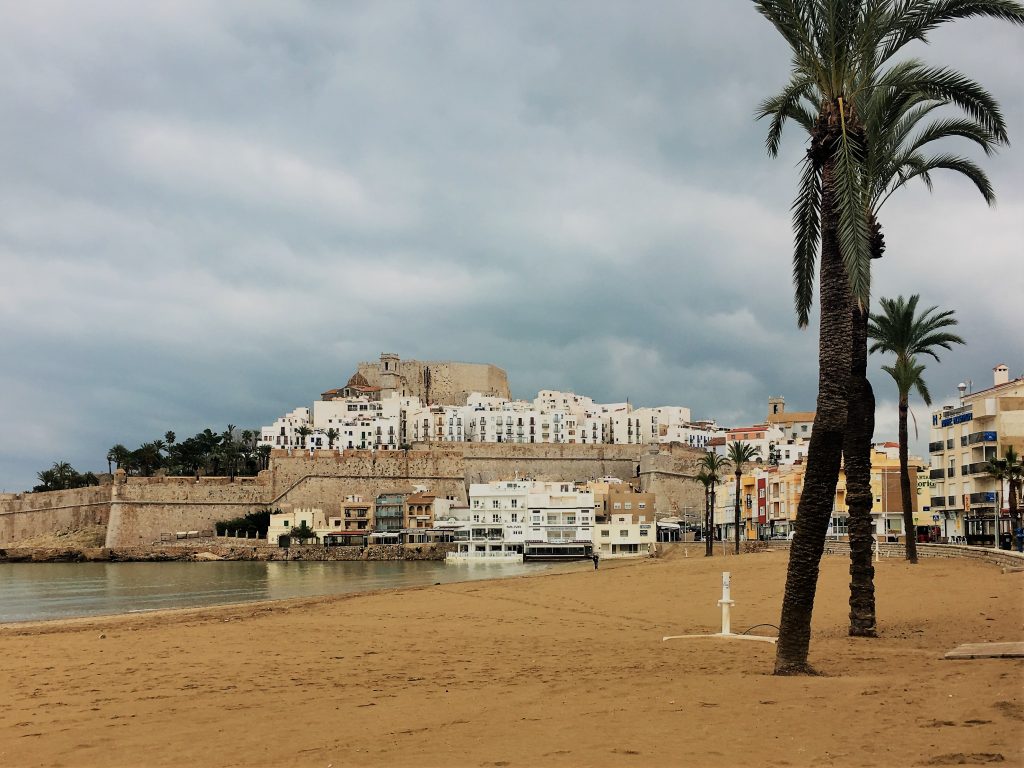 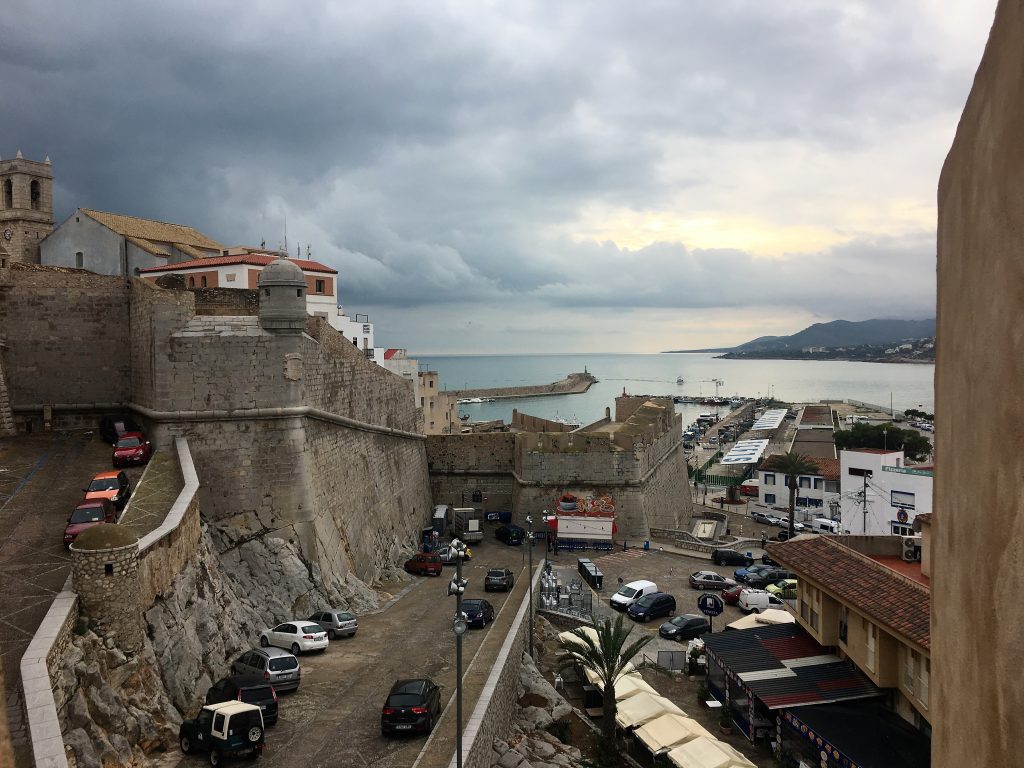 Looking towards the port and the Serra d’Irta

Our third coastal location was at El Grao de Castellon. Here in the stretch of coast between resort town Benicassim and the working port of Castellon there are two options for motorhome parking. You can stop by the airfield in a large car park without services, or you can stop on the parking next to the planetarium which has services. Both have their benefits but as we needed services and then there just happened to be a spot available, we stayed by the planetarium. 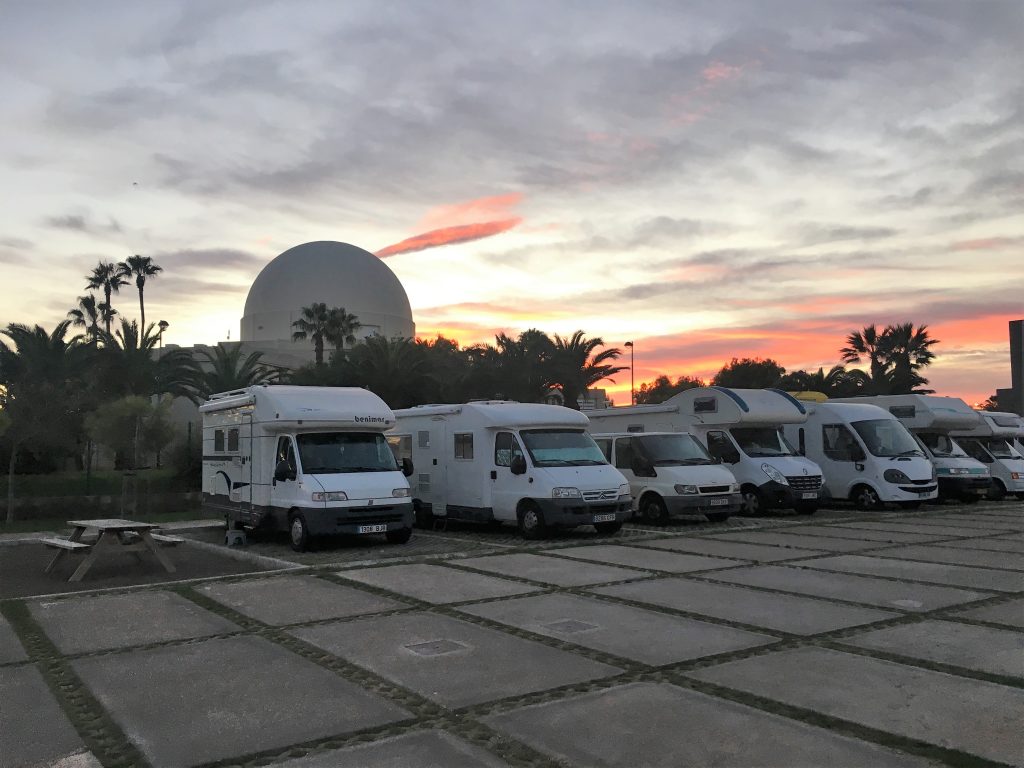 On first sight this wasn’t for us, lots of motorhomes squished together behind a long and unexciting sandy beach, but there was something about the place that really appealed. Perhaps it was the parks, one park littoral just behind the beach with boardwalks and paths and one park of pine trees with paella barbeques and play areas, both made pleasant places for a wander. Perhaps it was the sight of parachutes descending from the sky on a regular basis, tiny specks of colour against the blue. Perhaps it was the harbour with it’s friendly cafes. We didn’t do much here, we watched birds (lots of hoopoes) and bats, we waded in the sea, we chilled in the van and we sat in the cafes. It was a nice place and we stayed a second night without needing any persuasion. It’s a good place to linger for a day or two even though I cant quite put my finger on why. 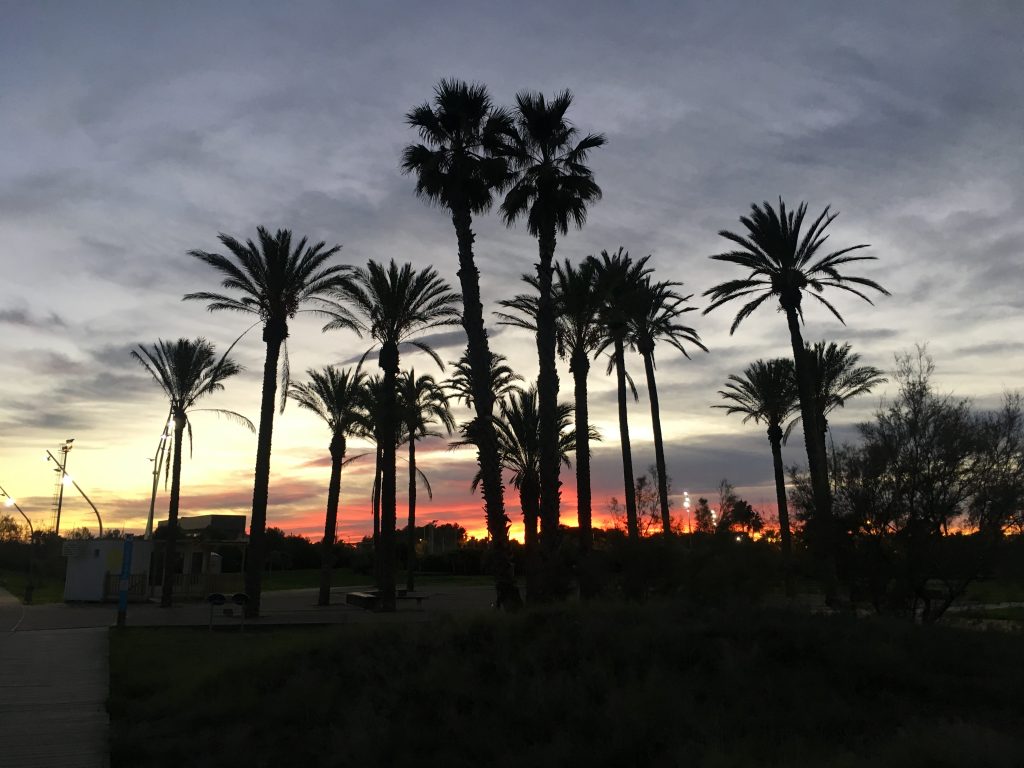 Sunset over the palm trees of the Parc Littoral 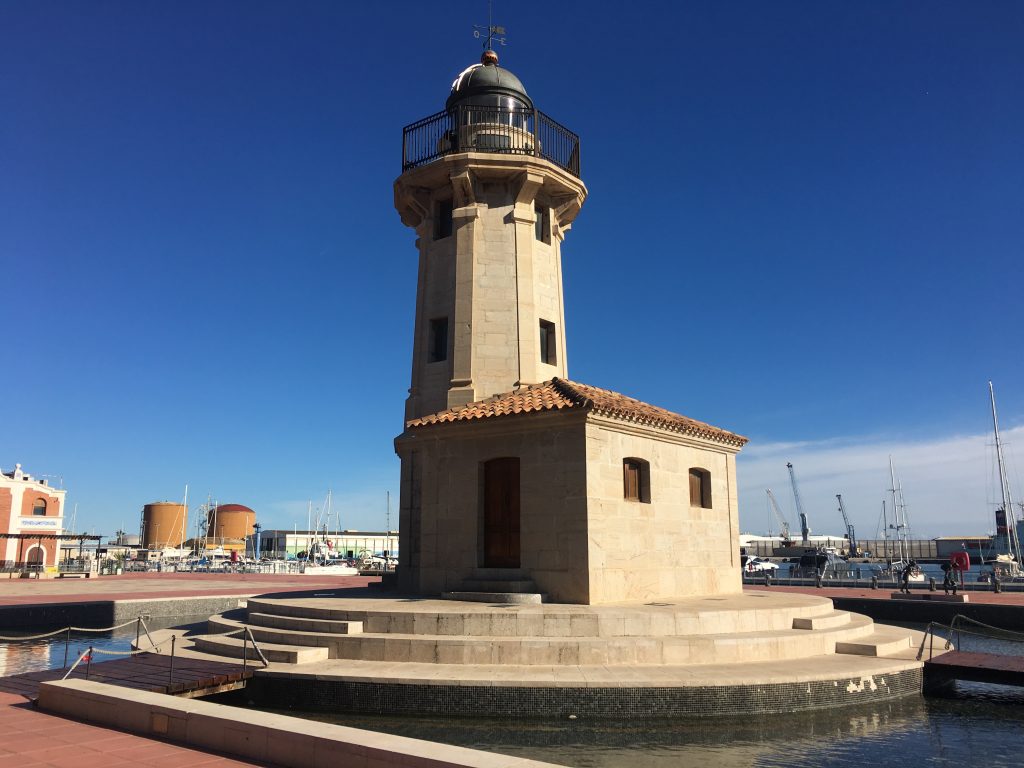 Lighthouse in the port area 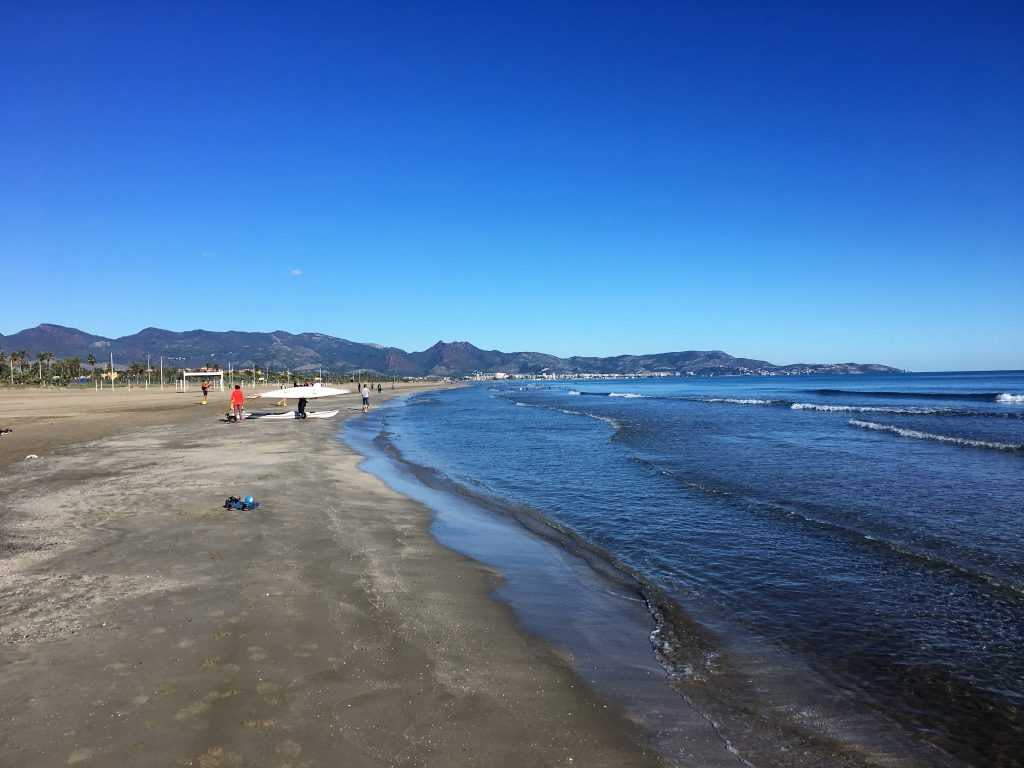 The long sandy beach stretches all the way to Benicassim