The next couple of days were spent around the Setubal area, birthplace of Jose Mourinho, the Special One. Setubal is just south of Lisbon and we skirted the capital to get to our first parking spot which was Figueirinha beach, a wide expanse of white sand and enticingly turquoise sea. Sadly, despite the sunshine, the wind was whipping along the coast and put paid to any thoughts of going for a swim. Instead we got on our bikes and headed up to the Forte de Sao Fillipe. The ride took us along the coast road, past the large cement factory where the air tasted of fine cement dust and left our skin feeling dried out. Then up through cobbled country lanes and dirt tracks before joining the tarmac road that leads to the fortress.

The fortress is a hotel, part of a chain of Pousada hotels, similar to the Paradors of Spain this chain specialises in hotels in historic buildings, but this doesn’t stop people from looking around. 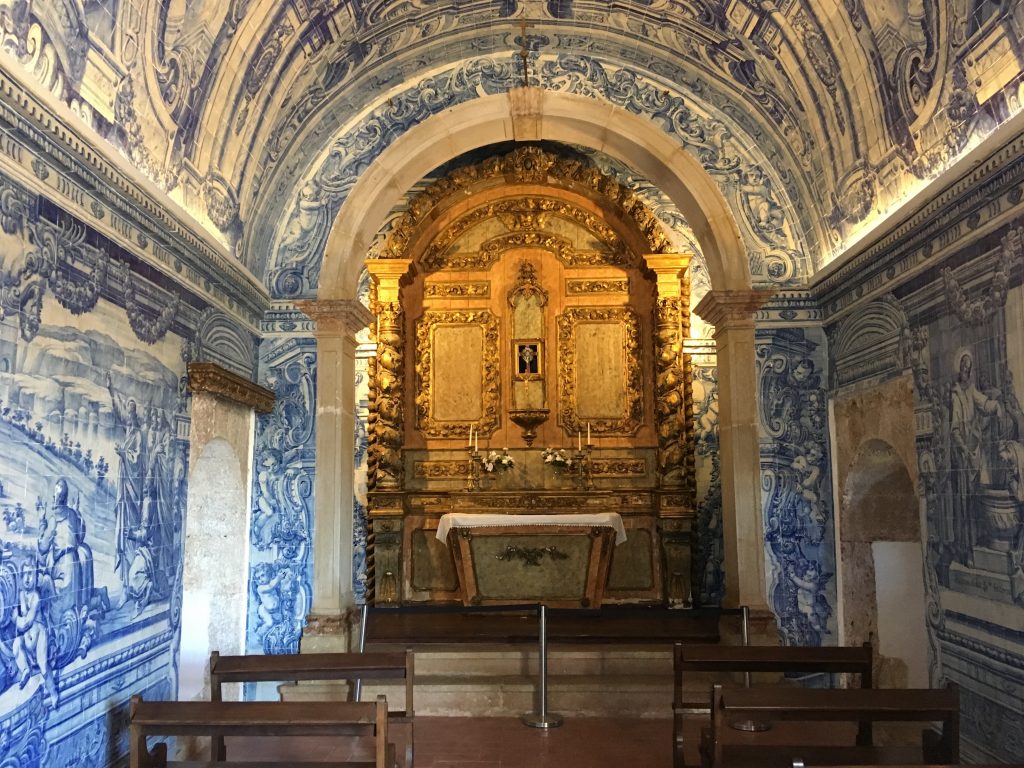 Recently extensive renovations have been carried out and the hotel only reopened earlier this year. We explored the walls of this ‘star’ fort, with it’s battlements pointing out towards the surrounding countryside; views of windmills on hilltops inland, views across the city of Setubal and views out to sea. It would be a lovely place to have a meal or a drink with it’s rooftop bar and restaurant but too windy today. 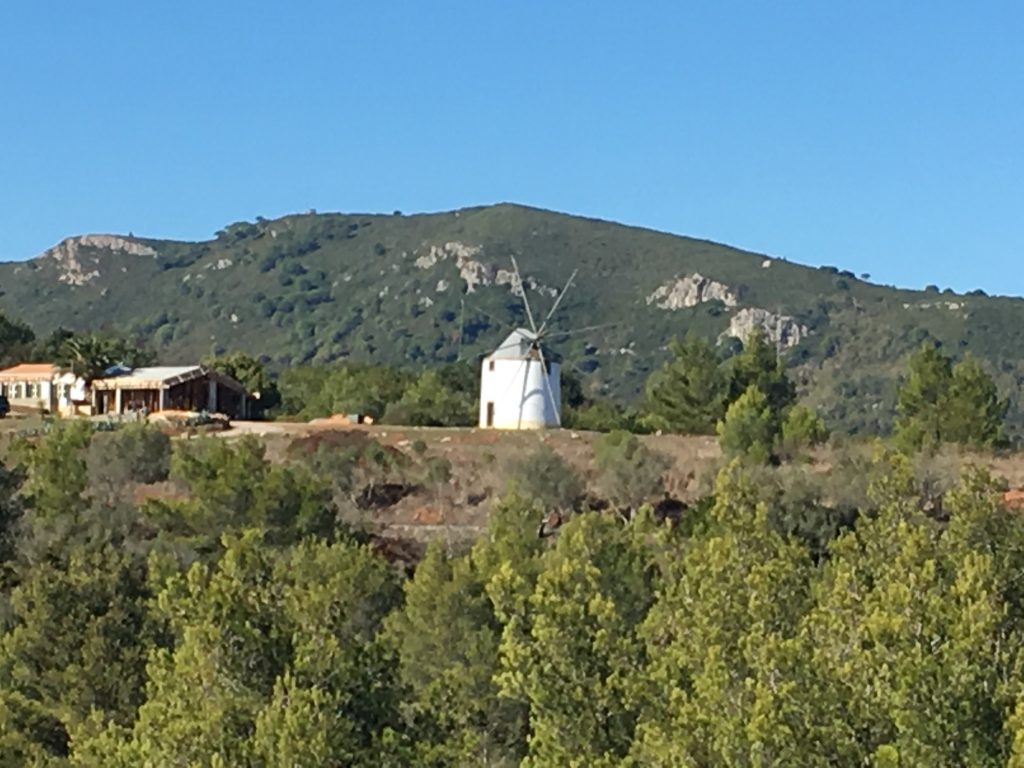 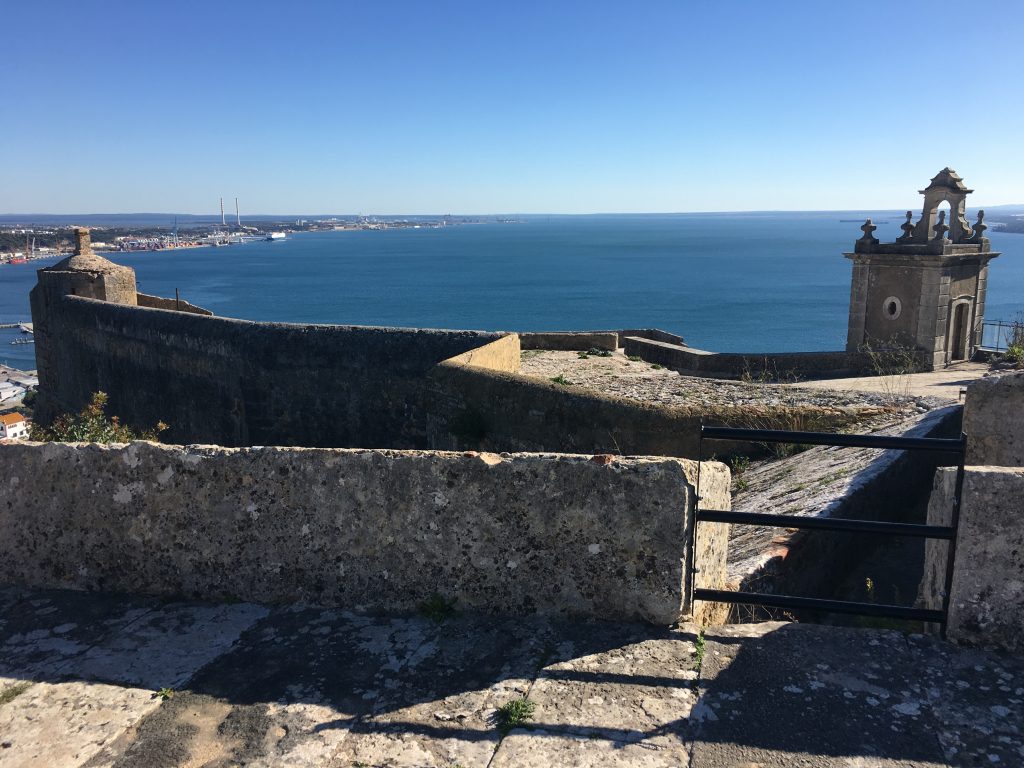 Each point of the ‘star’ fort was very similar apart from the views – this point looked over Setúbal and the sea, a view of strategic importance, protecting naval access to Lisbon

The following day we moved onto Comporta, not far as the crow flies, but the road has to bypass the estuary of the Sado river. As we drove through Setúbal we traversed Av. Jose Mourinho, of course, there don’t seem to be any statues yet!

We stopped in Comporta at a dusty aire on the village market square with several other vans and took another bike ride along the spit of land that points back towards Setubal. This time we were cycling on flat easy roads past rice fields, we were aiming for the roman ruins but these were closed for the season; we peeked through the fences. The whole area at the end of the spit is a holiday resort and was a bit of a ghost town, empty for the low season. You got the impression they really didn’t want anyone going there out of season with lots of barriers and security. We tried to get a bit of variety to our route on the way back by heading off road, but each time we did we ended up wallowing in deep sand. It was one of those places we felt we could have lived without, but the number of cans in the parking left us wondering if we had missed something. Maybe we should have gone into the Rice Museum. 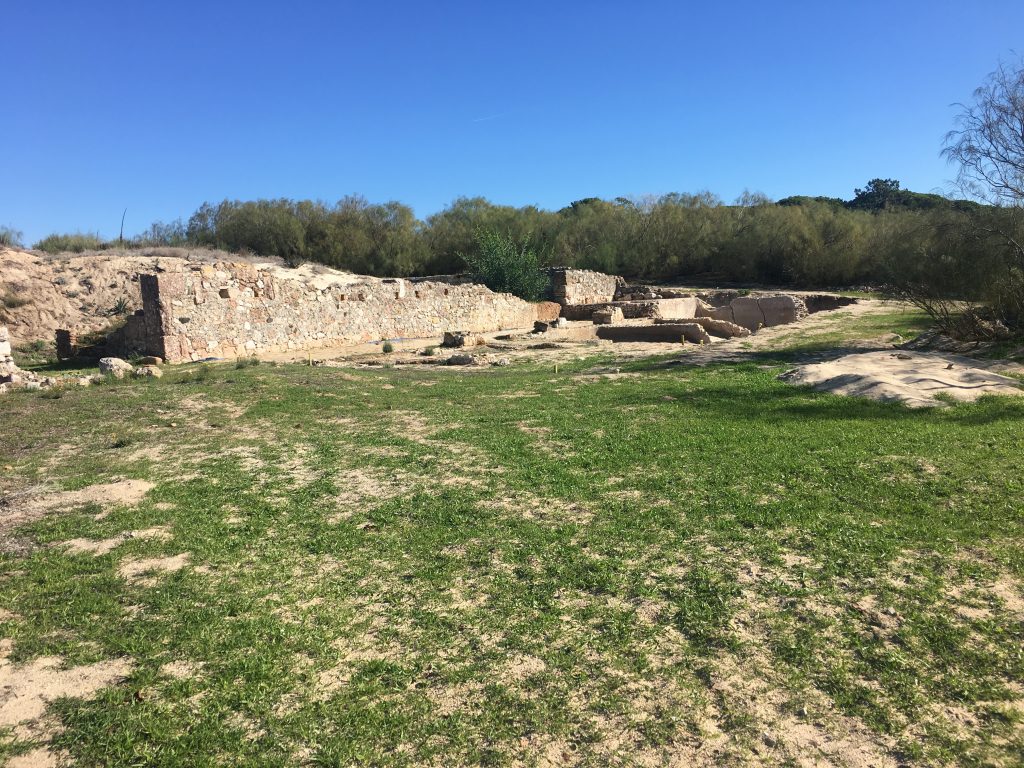 A distant view of the Roman ruins through chain link fence 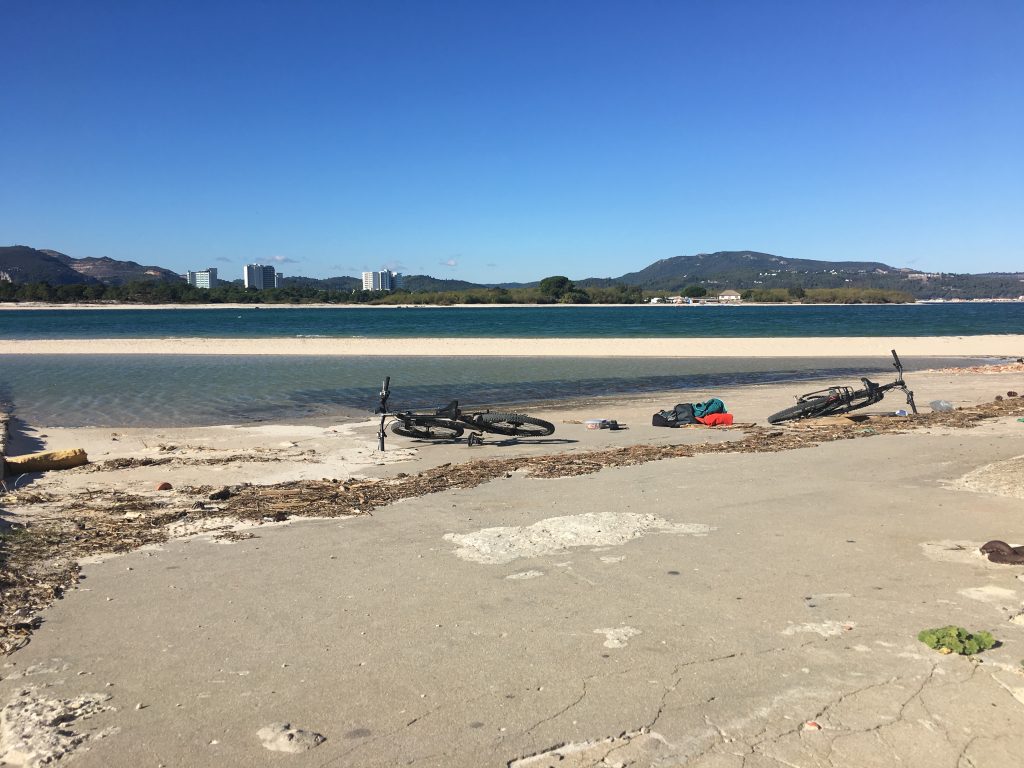 View from the Troia peninsular

Time to move on, so we set sights for the coast south of here. I had seen good things about Vila Nova de Milfontes, but the amount of ‘no motorhome’ signs put us off (it didn’t put everyone off, we saw one French van parks across four spaces in front of the ‘no autocaravannas’ sign) and so we moved onto Praia de Almograve where we were the only motorhome parked on a large concrete parking area above the beach, but still felt more welcome.