From our parking spot at the Praia de Almograve we could access part of the Ruta Vincentina, two interconnected long distance trails that run all the way down the south west of Portugal from Santiago do Cacem to Cabo Sao Vincente. There is a historical trail, a fisherman’s trail and a number of circular routes that allow you to join the two together. 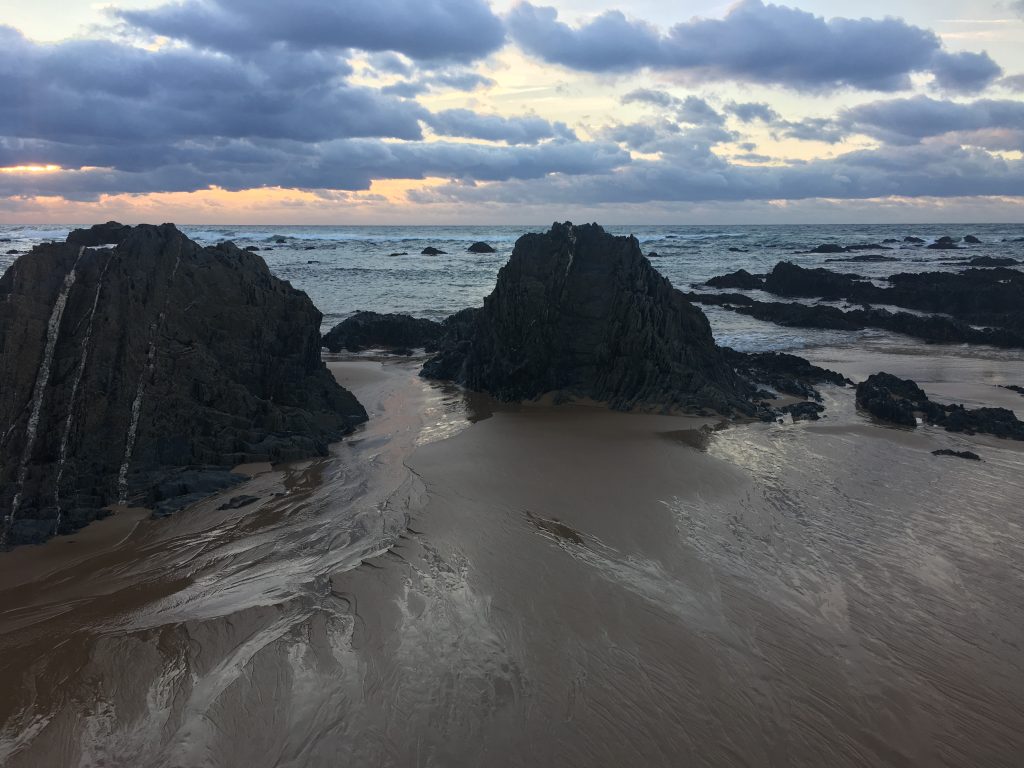 Exposed rocks on the beach at Almograve

We joined the fisherman’s trail and walked south, heading for Cabo Sardao. The route took us for a short distance down a well made track until we reached a small fishing port. There were plenty of other people walking this section of the path and most turned around here. 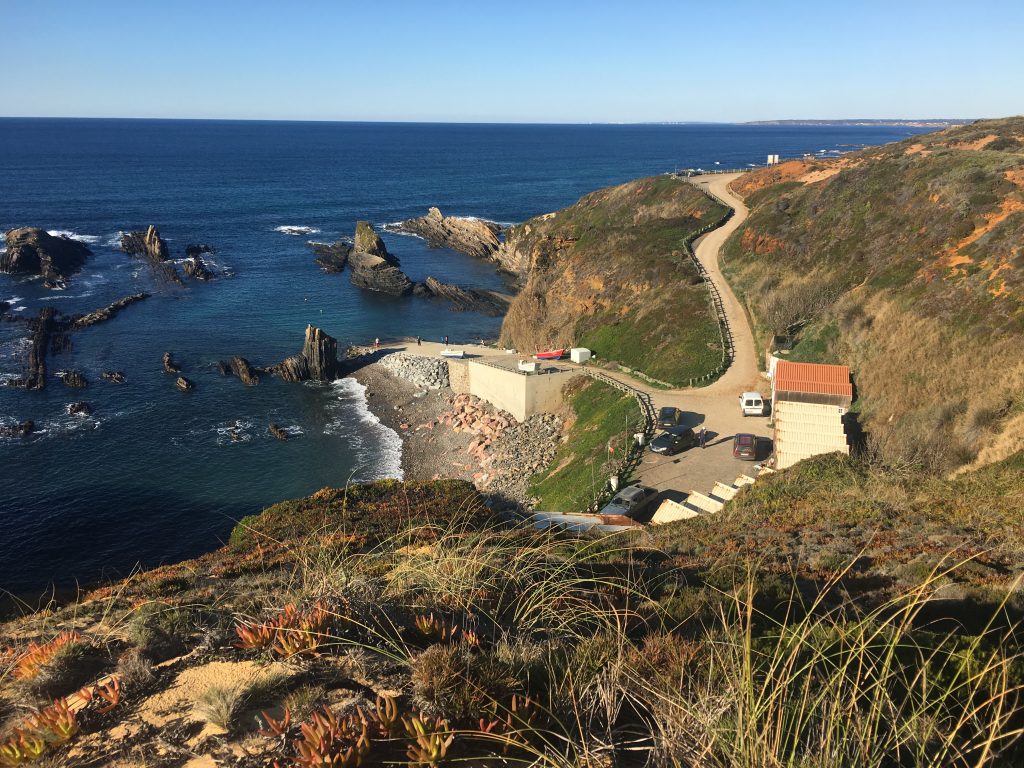 Looking down on the tiny port

The route struck off over the clifftops with the paths mostly soft sand between rocky outcrops. It was hard going on the uphill stretches as we slogged through the sand, but worth it for the fine views of the ochre cliffs against the blue sea. 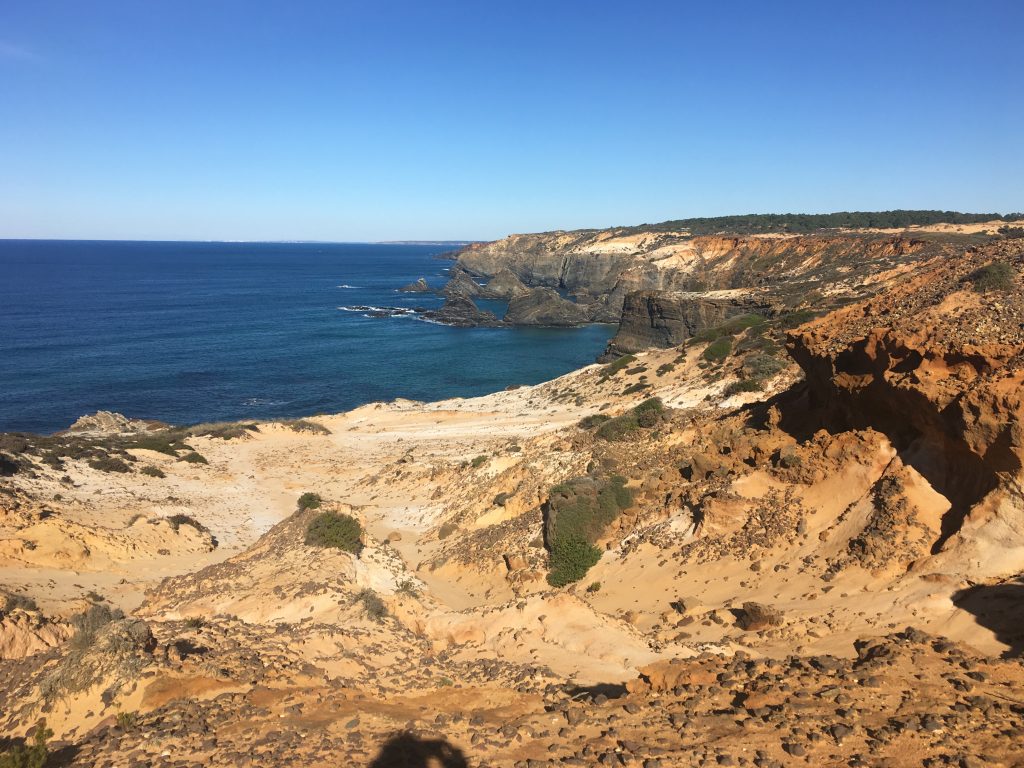 Colours of sunsets and rust in the cliffs south of Almograve

As we approached the Cabo Sardao we detoured inland to avoid a large sand dune, this took us through a forest which gave us welcome respite from the sun. 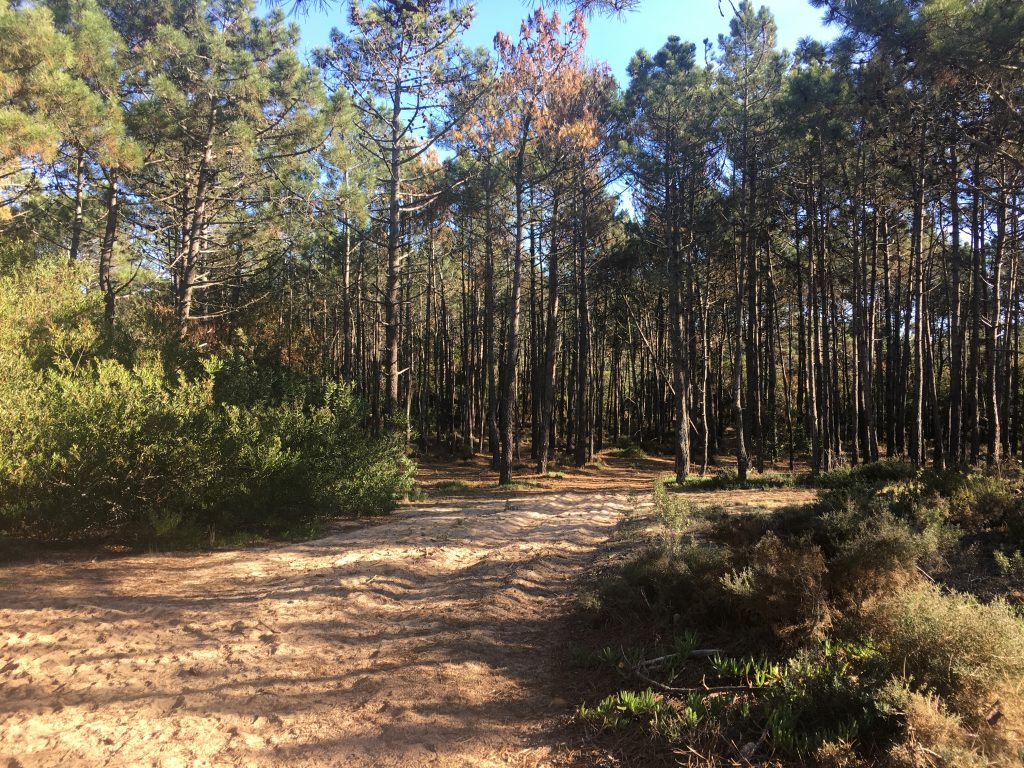 Cool shelter provided by eucalyptus and pines in the forest

On the other side of the forest we were only on the coast for a short distance before we took another inland detour along tracks and roads to avoid a deep valley, on the other side of this was the lighthouse at Cabo Sardao which had plenty of decking platforms for people to admire the view. We were sure that we hadn’t needed to take that detour, so on the way back we followed faint tracks down into the valley and up broken steps the other side to emerge in a thicket of shrubs – we would never have found this from the other direction. Not the designated path but it cut out a lot of the less interesting walking.

This walk was incredibly beautiful and worth doing, despite the tonnes of sand we found in our boots, clothes and rucksacks at the end of it. The coastline, constantly being redefined due to erosion, is made up of many shades from cream to deep ochre and is sculpted into interesting shapes and precipitous overhangs. Being Portugal the fishermen still manage to find somewhere high and dangerous to fish from.

After our walk we wanted to find somewhere we could enjoy the sunshine and relax, so we took off down the coast and explored a few parking spots. Eventually, after exploring a number of spots and with darkness fully upon us, we settled on Praia de Bordeira. There were plenty of other vans here, in the dark we didn’t know if it would fit the bill but it was time to stop for the evening and we would decide whether to stay the following day.