The forecast for the 28th was rain, so we didn’t make many plans except for a spot of grocery shopping. It was a mega two supermarket shop. Lidl for the bargains and stuff we know that they sell (i.e. cheddar cheese) and Intermarche for their baked goods and French cider. Paul, being almost exclusively a cider drinker, has had some interesting experiences in Portugal with Somersby and Strongbow – so called – cider. He was very excited when he saw these British brands in the supermarkets, but disappointed to find that it wasn’t really cider especially as he went a bit mad and bought 24 bottles. Instead it is a mixture of cider, apple juice and apple flavouring and tastes like an apple alco-pop. Luckily Intermarche sells the french stuff which passes muster and I’m sure we’ll find some british brands for vastly inflated prices when we get down to the ex-pat territory of the Algarve.

After stocking the cupboards we decided to take a quick trip to Cabo da Roca, the headland that is the most westerly point in mainland Europe. We approached along busy roads and drove into the carpark only to drive out again, narrowly avoiding the hordes of tourists. We parked for a cuppa on a layby to the side of the road and watched coaches arriving and leaving with great regularity. It’s obviously a popular day out from Lisbon. The Romans believed that this was the end of the world.

Although we’d fancied the walking from Cabo da Roca, we didn’t fancy the company of the tourists so we pushed on further south to Cabo Espichel. Another headland but much quieter this time although it seems to have more going for it than just geography. The church of Nossa Senhora do Cabo has been a place of pilgrimage and still has the dormitories for pilgrims lining the approach, although they are now boarded up. There is also a chapel lined with Azulejos – the blue and while tiles  that Portugal is famous for – depicting the story behind the dedication of the church, although it was locked when we were there and we had to peer through the bars on the door. 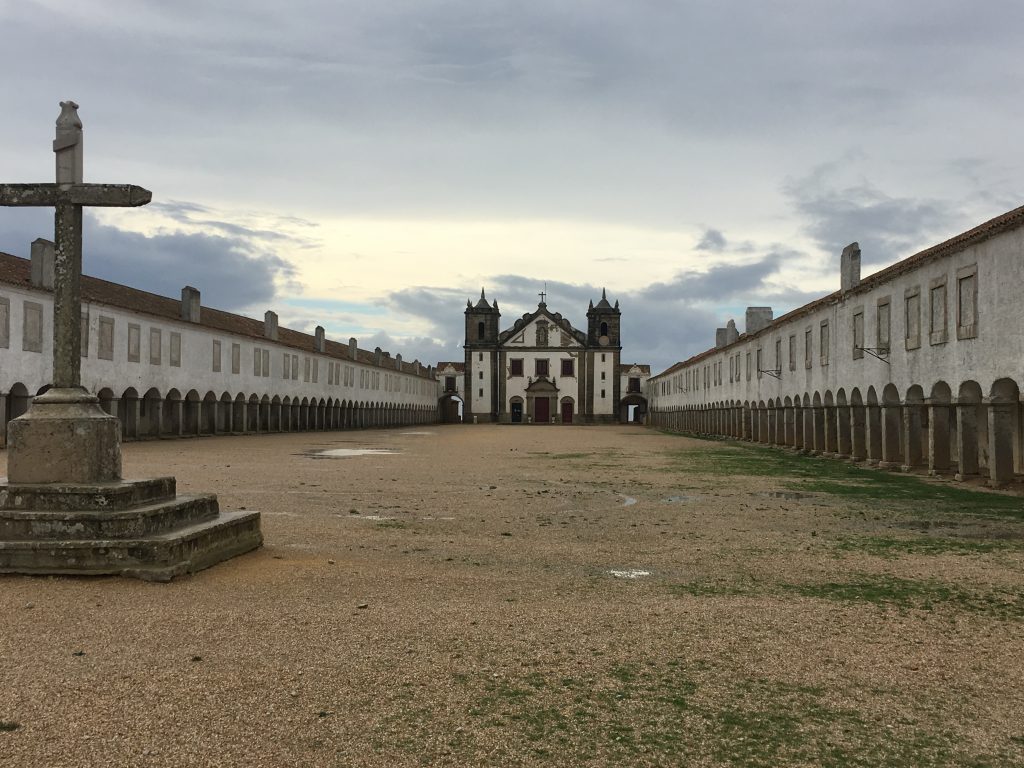 The church of Nossa Senhora do Cabo and the pilgrims accommodation 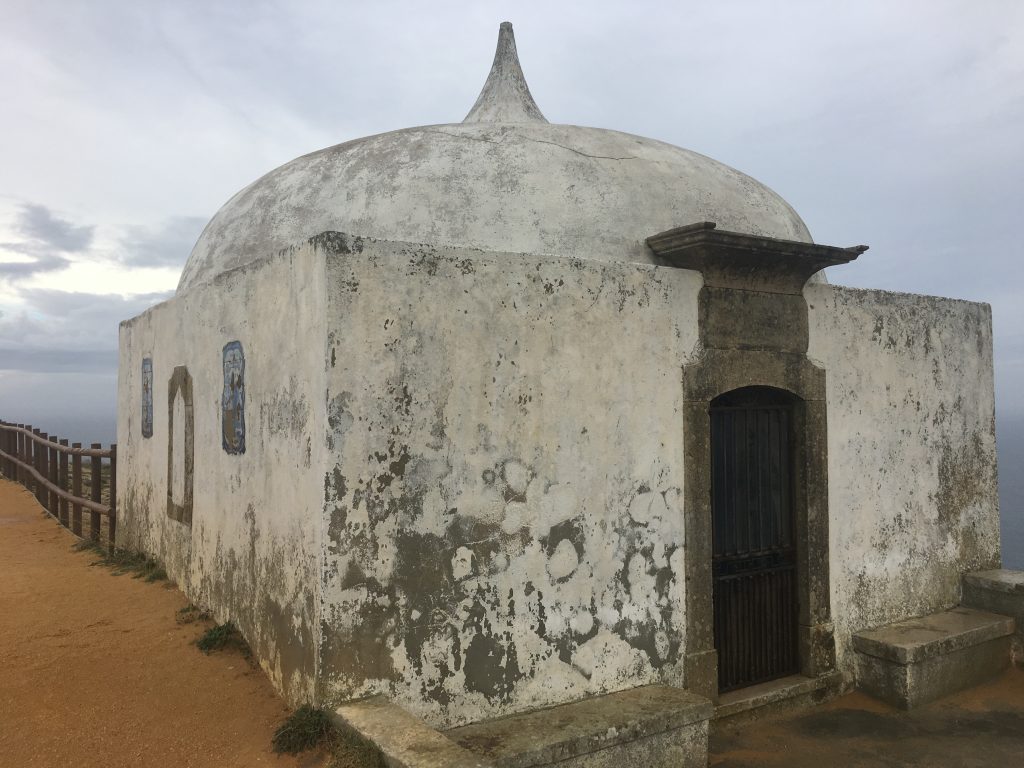 This tiny chapel was beautifully decorated inside with azueljos

The skies were a deep grey by now and rain was threatening. We decided not to venture too far from Bertie and sure enough the rain began to descend heavily almost straight away. We watched as the car park in front of us turned into a small pond and water ran in rivulets down Bertie’s sides and then down the carpark eroding channels in the clay. It was an afternoon for a bit of TV and web surfing.

The following day the rain had passed and we went for a walk around the headland, following a marked route to the south, passing the lighthouse and taking us to a ruined 17th century (we think) fort where a rusted pillar would have once held a warning beacon. 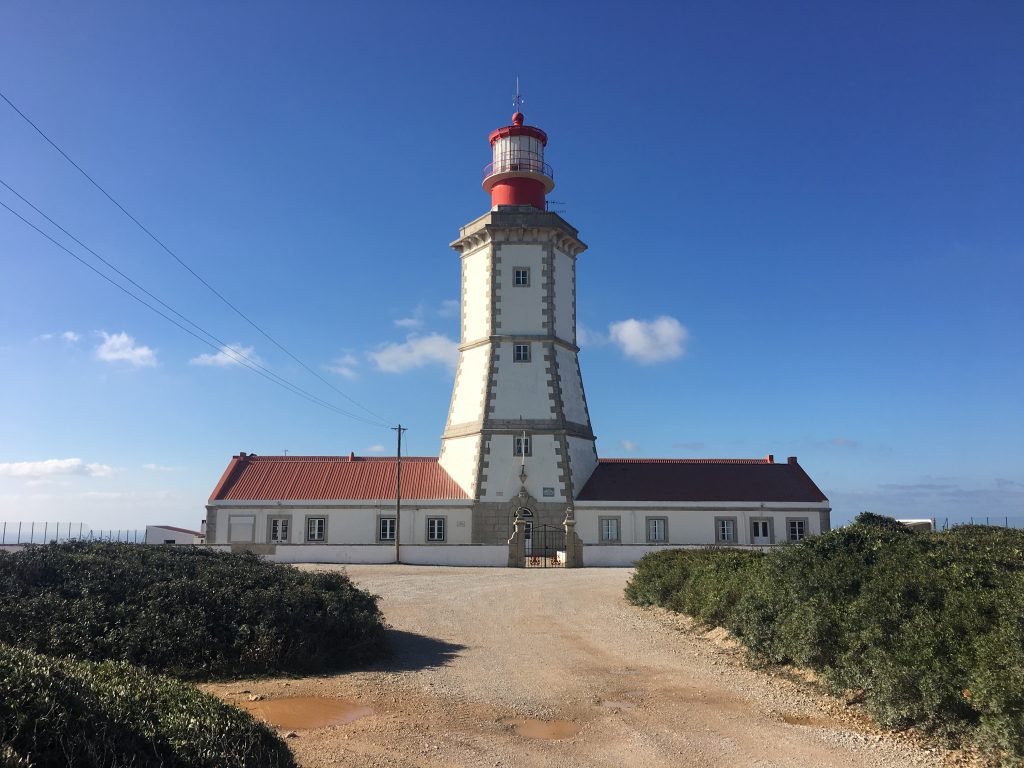 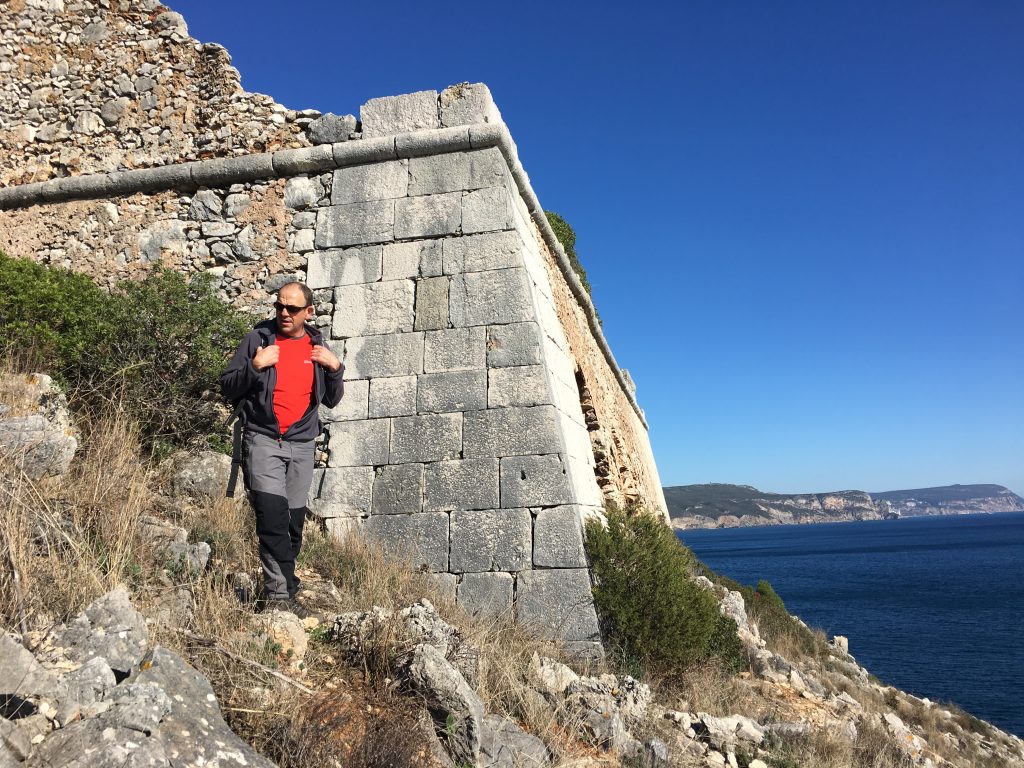 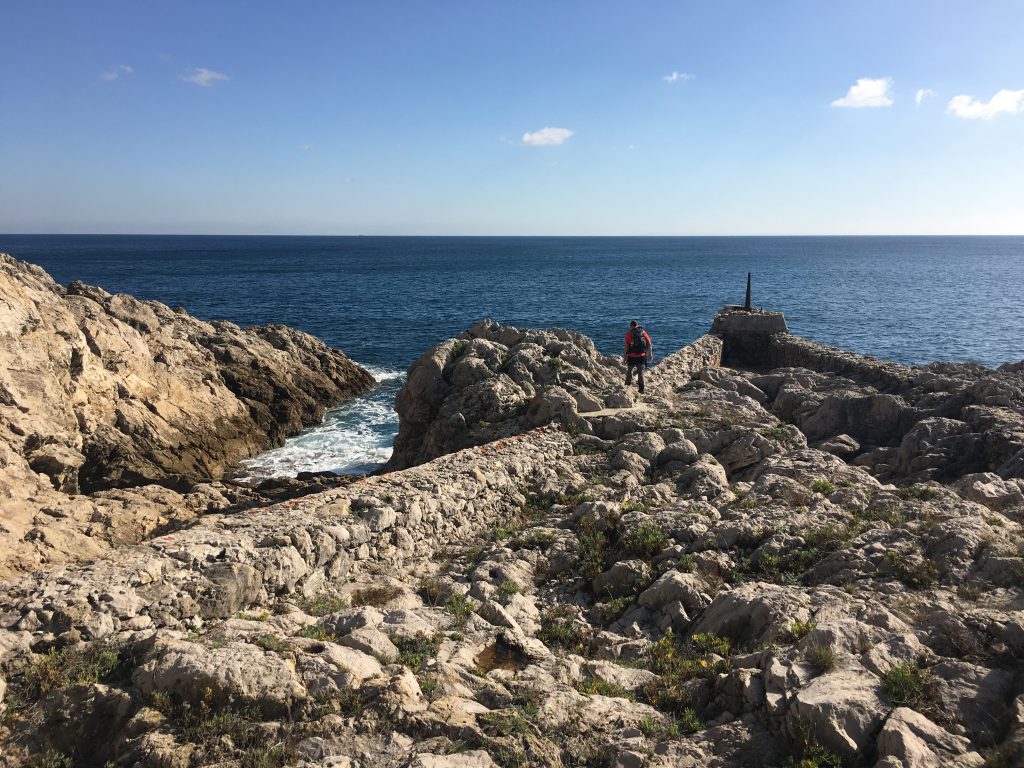 On the coast below the fort was this emplacement, including a rusted post for a warning beacon. These days it looks like someone uses it as a fishing spot.

From the fort we cut across the headland, passing half built villas, maybe from the 80s which were now derelict. Building materials were scattered around and Paul identified a few asbestos tiles – nice. 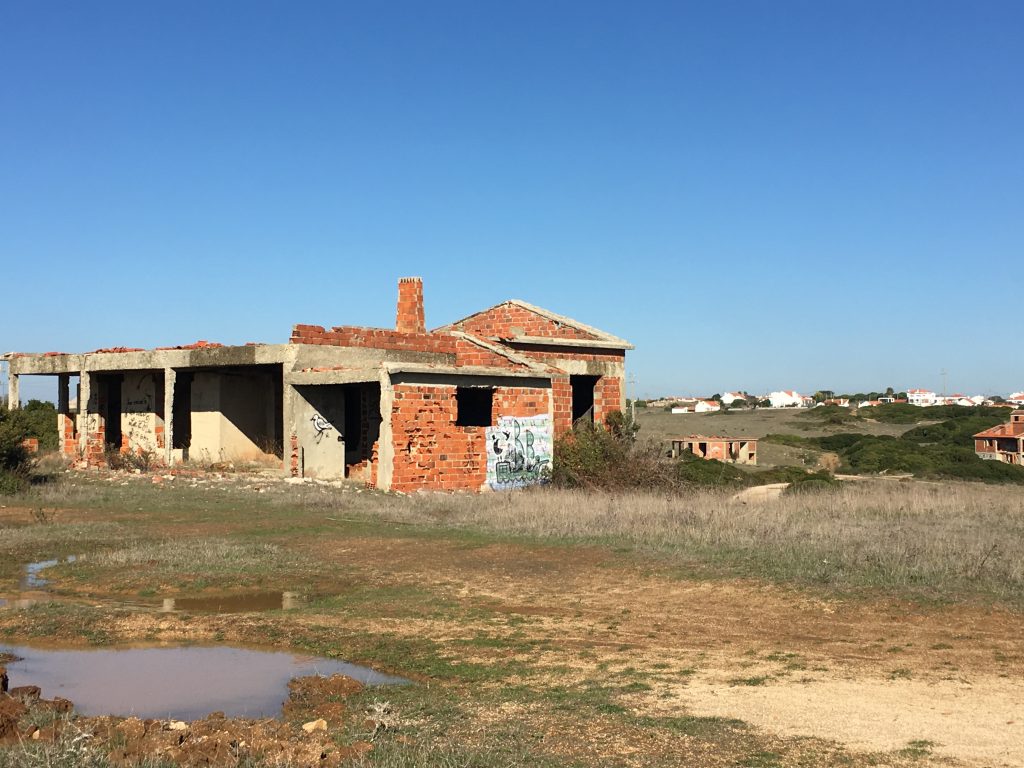 Half completed buildings, there must have been a dozen of these in various states of completion.

On the north side of the headland we joined another marked route that followed the northern coast to the Pedra da Mua – the footsteps of the dinosaurs. The coast here is made of many layers of sedimentary rocks and several steps of dinosaur footprints have been found. The only ones we could make out were those that tracked up the cliff opposite the viewpoint, although there are others we couldn’t find them and I would recommend looking on the internet for some pointers before going rather than afterwards! These footprints form part of the legend of the area with stories that the Virgin Mary rode a giant mule out of the sea and up to the headland. 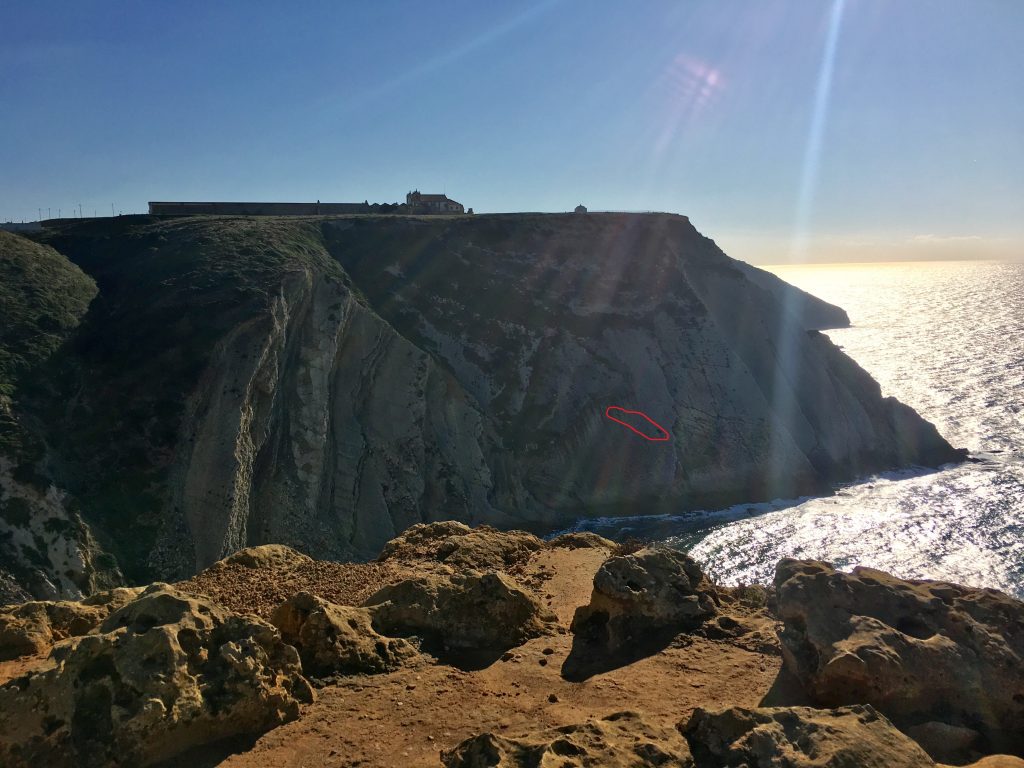 Can you make them out? 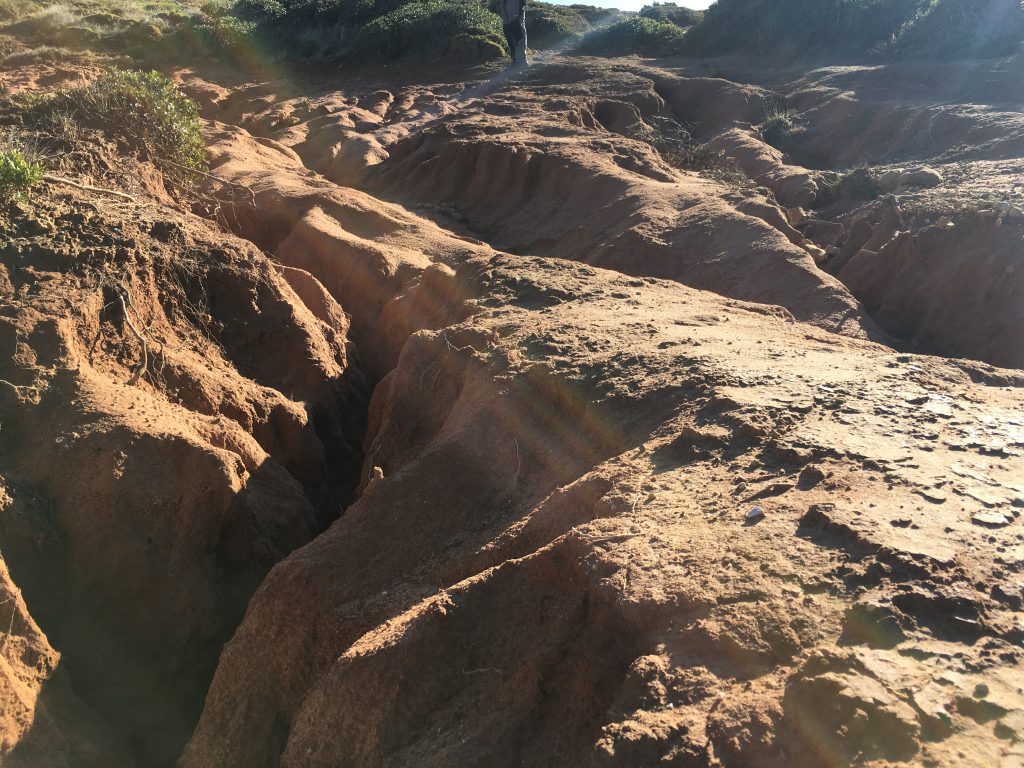 Eroded paths, channels have been scoured by rain waters through the soft sandstone

At the end of the walk we investigated another building, this was part of the water supply and laundry area for the church and pilgrim buildings and an aqueduct can be seen near the road that leads to the headland. 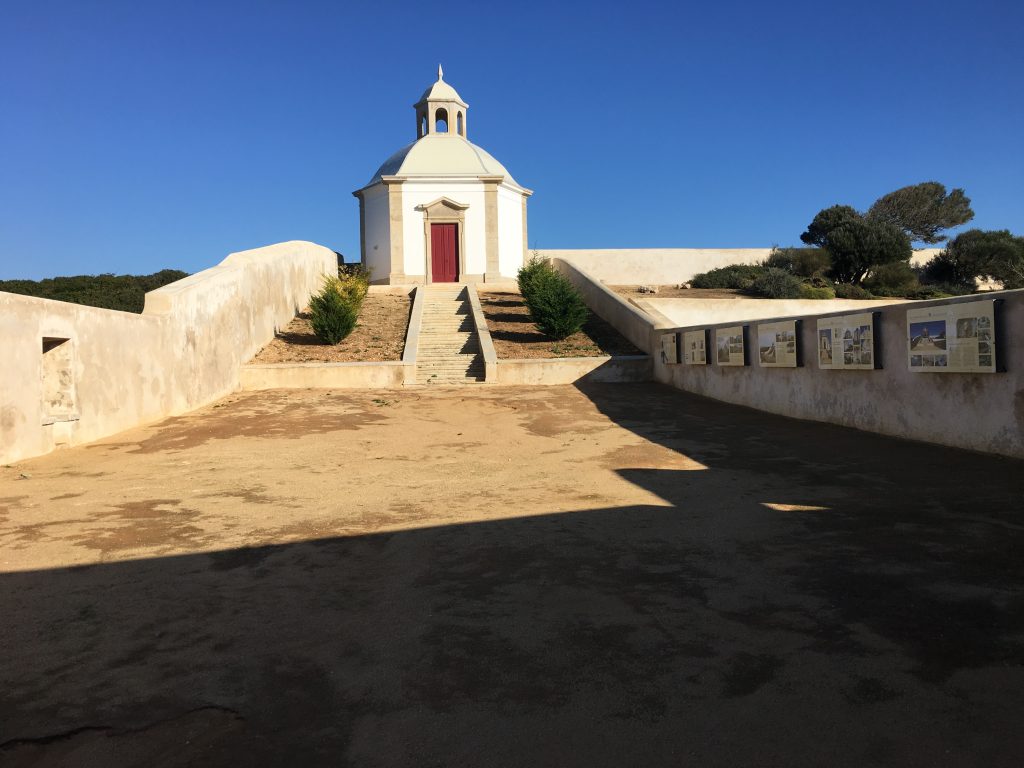 Laundry, water supply and now there is a rustic campsite within the walls to the right of the picture (summer only)

Because of the previous day’s rain the walk had been extremely muddy, we both felt a couple of inches taller with the amount of claggy sediment that was clinging to the bottom of our boots. Despite our best endeavours this mud got everywhere.