It was going to be a whistle stop tour through the Alpujarras as the inclement weather had delayed our start. We only had three days before we were due to meet our friends in Malaga and so many things to do.

Our last trip to this area had been fourteen years previously when we had stayed in Trevelez for a few days between Granada and Nerja. Then it had been August and blisteringly hot, so it was interesting to get a taste of the Alpujarras in winter. We had never been to the eastern end of the range either, and that was where we started this time. 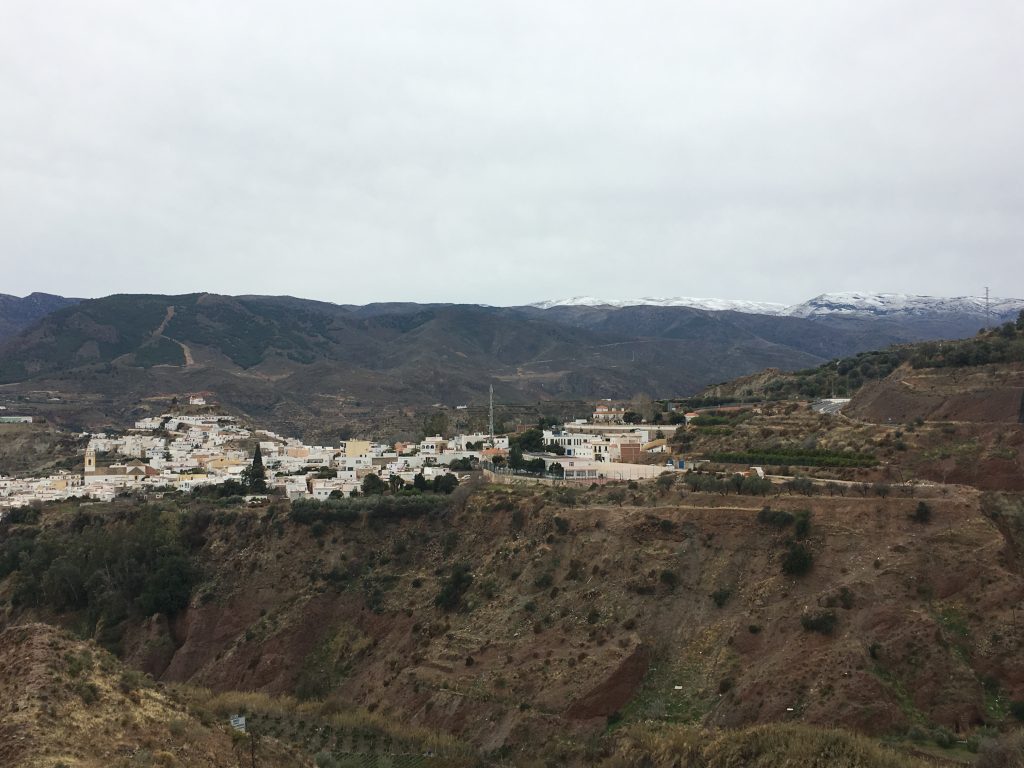 Canjáyar from the other side of the A348, the motorhome services are at the top of the village, accessed from the junction you can just about see

We had driven up to Canjáyar on the night of the 8th, feeling a thrill of excitement to be in the mountains again. Between us we love the mountains and the sea, but it’s definitely me that loves the mountains more and Paul who prefers the sea. That’s why we love areas like the west coast of Scotland so much; the mountains meet the sea with not a cigarette paper between and neither of us can feel short changed. Spain has more than it’s fair share of mountains, but the distance from mountains to sea is a little further. Not too far though, and it had only taken just over an hour to get from one to the other.

A walk in the Eastern Alpujarras

The parking in Canjáyar was next to the fire station and when we arrived there we volunteers tidying the area keeping it all spick and span. The eastern Alpujarras are less popular than the west, and we didn’t have any overnight company although half a dozen vans came and went making use of the water and waste facilities, rare commodities in these hills. The town was very quiet, but as always there was a panadaria open for people to get their daily bread. It has to be this way because Spanish bread goes from being chewy and satisfying to rock hard overnight like an inverse miracle.

From Canjayar we took a walk up a steep sided valley. We wanted to be on the other side of the A348, so we had to drop down from the town which sits like an island between ridges, and pass under the main road. There are a number of possible routes under the road, most of which are drainage of some kind, but some are just narrow tunnels and some are wider, higher underpasses. We descended from the Calle Animas down a steep concrete track wondering if we were going the right way. The path was overgrown with bamboo and seemed to be someone’s small holding. It was only when we came across another concrete track/drainage ditch that we found some trail markings that took us under the road and gave us confidence we were heading in the right direction. 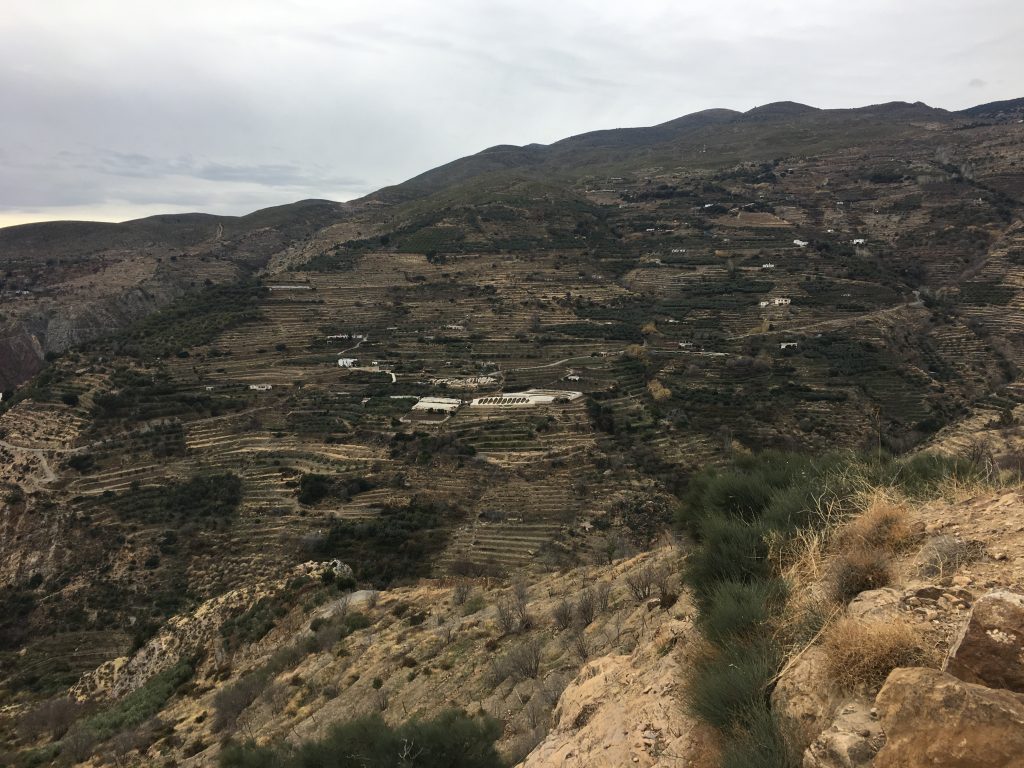 The path took us steeply uphill to the top of the ridge along the marked trail until one hairpin where we missed the markers. Here we took a route straight ahead along a terrace between vineyards beside an acequia (an aqueduct used to irrigate the terraces). It’s funny how we were complaining about agricultural landscapes only a couple of weeks previously but now were talking animatedly about them. The hard work involved in farming on terraces means that fewer and fewer people are doing it. Children move away and leave family plots untended. Some terraces are beautifully kept, some pragmatically kept (a lot of use of old bed frames for fencing) and some unkempt and slowly disintegrating. We wondered where the responsibility sits for maintaining the terraces, if you were working on the land you would want to know that the terraces above and below you were not going to slip slowly down the mountainside. 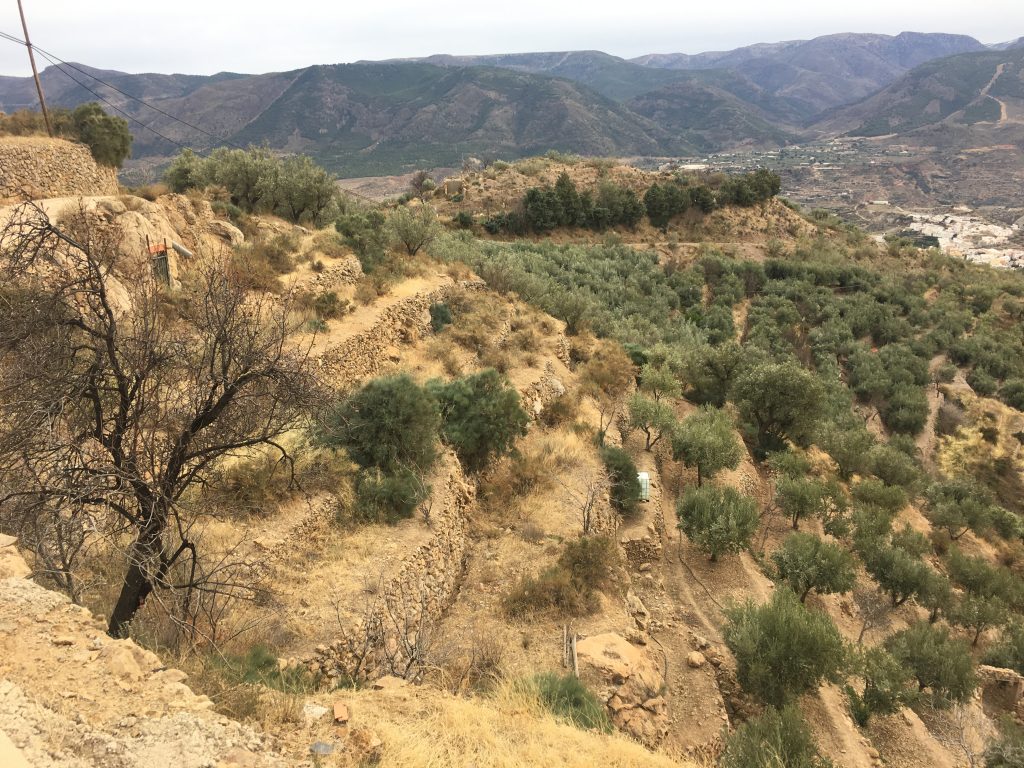 When we reached the trail again, after our detour, we decided to follow it back downhill until we could take another deviation to drop into the river valley. Here the path had been washed downhill in a couple of places, leaving eroded channels that required some edging around. It made me nervous but Paul just stepped across them with a wide stride that I seem incapable of when faced with steep downhill slopes. From the river, where a trickle of water was running between more bamboo, we could see that lower terraces had been washed away by floods.

We followed the river valley back to Canjayar, it hadn’t been a long walk but had introduced us to the arid mountain landscape of the Almerian Alpujarras

A Walk in the Western Alpujarras

We hadn’t intended to drive as far as Pampaneira, but as we caught site of the snow covered mountains of the Sierra Nevada, shining brightly behind the more demure Alpujarras we just couldn’t help ourselves and we wanted to get closer to the snow line. We ended up driving as far as Capileira, initially through some dense patches of fog but mostly with clear views and blue skies. We stopped a couple of times along the route – once for a cuppa, and a second time because my sinuses were misbehaving and my head was threatening to explode. Disaster was averted and my head is still in one piece, it must have been a combination of altitude and hairpin bends.

From Capileira we did another walk up another steep sided valley, the Poqueira gorge. This time we took a circular marked route out of the village to take us up to La Cebadilla, an abandoned village which used to house workers on the hydroelectric power station. The landscape here looks greener and more fertile than the east, but is less developed for arable farming, it seems to be used more for sheep and goats than for the vines, olives and almonds of the east. 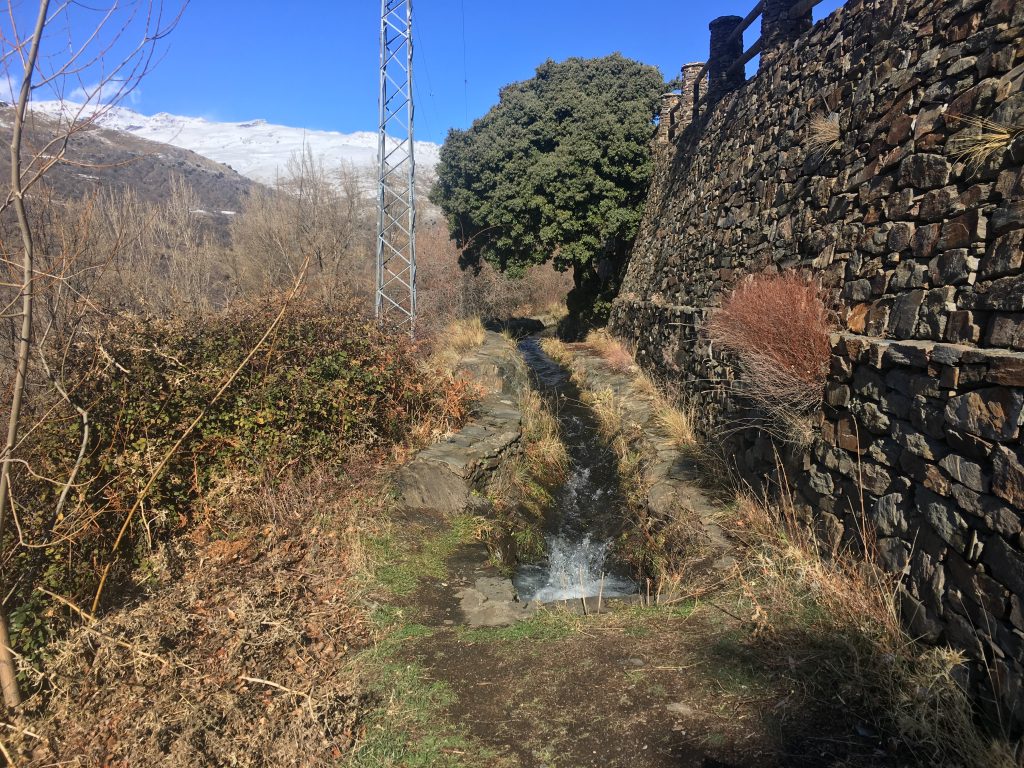 Acequia on the route up the Poqueira valley

The path was well marked, a sign of the popularity of walking in this area. There was no chance of missing the trail this time as we ascended steeply out of the village and walked along a path near the top of the eastern ridge of the gorge. Every now and again we would come across a patch of snow and sometimes the path was icy. The snow capped mountains were a constant background presence. 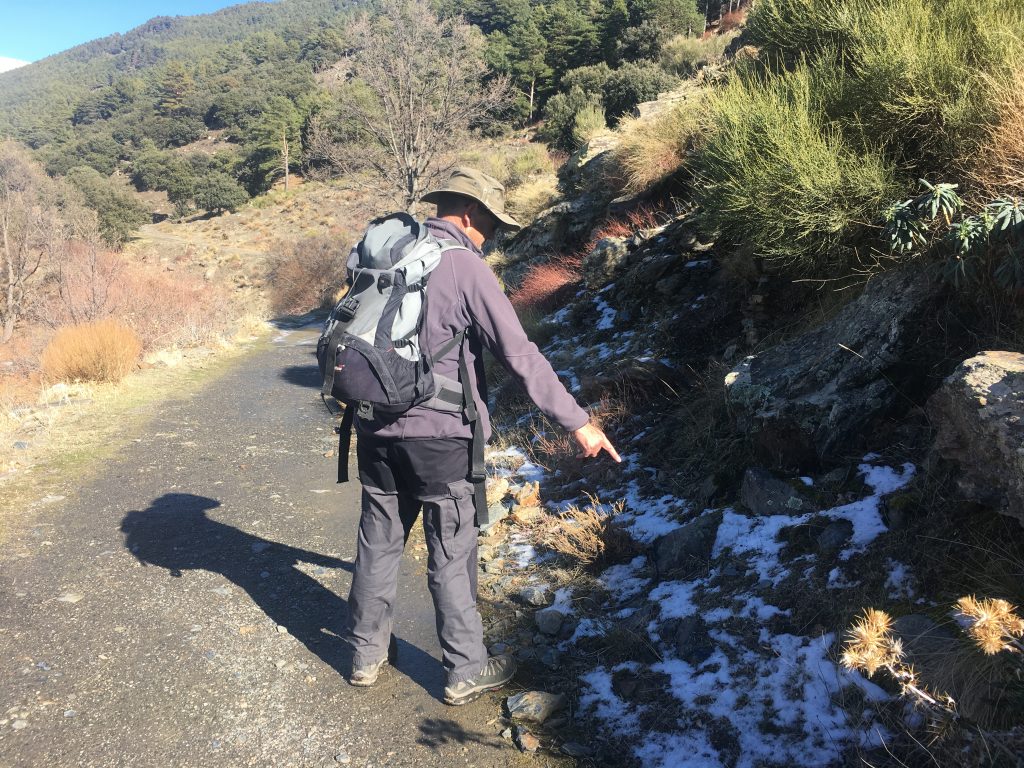 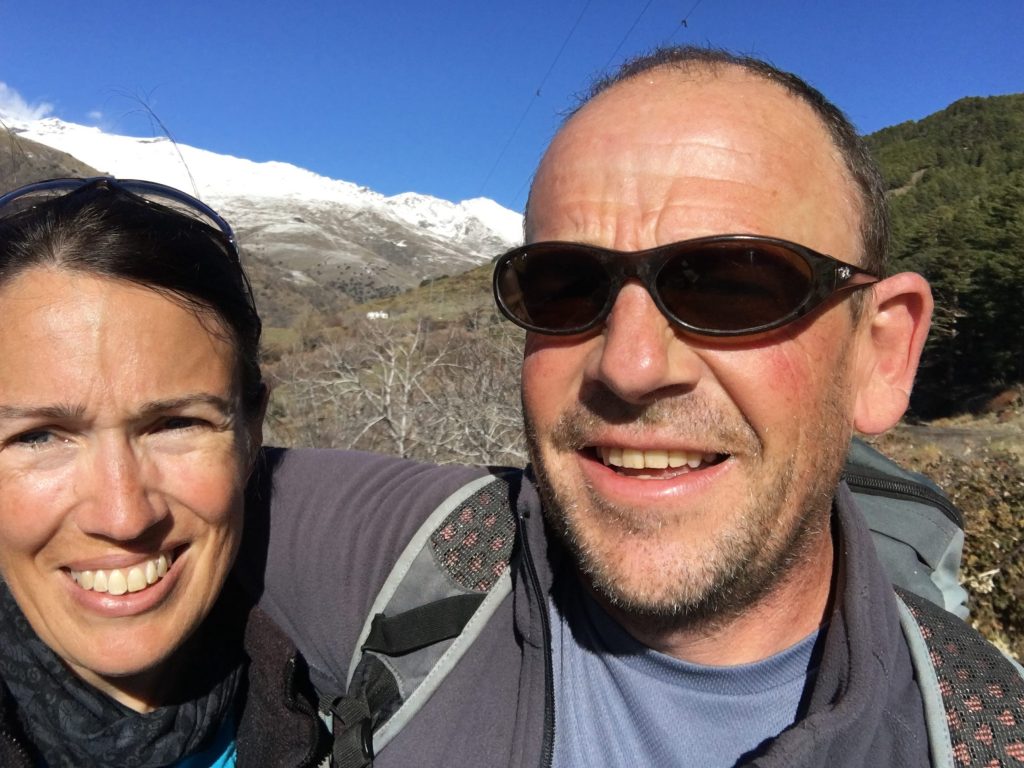 You cant help smiling in such wonderful surroundings

The abandoned village was interesting to walk around. The chapel sadly covered in graffiti and full of empty food containers, the buildings boarded up. One building was being used as a kennels and we could hear the dogs whining and barking inside. It feels odd to have such a beautiful place untenanted. 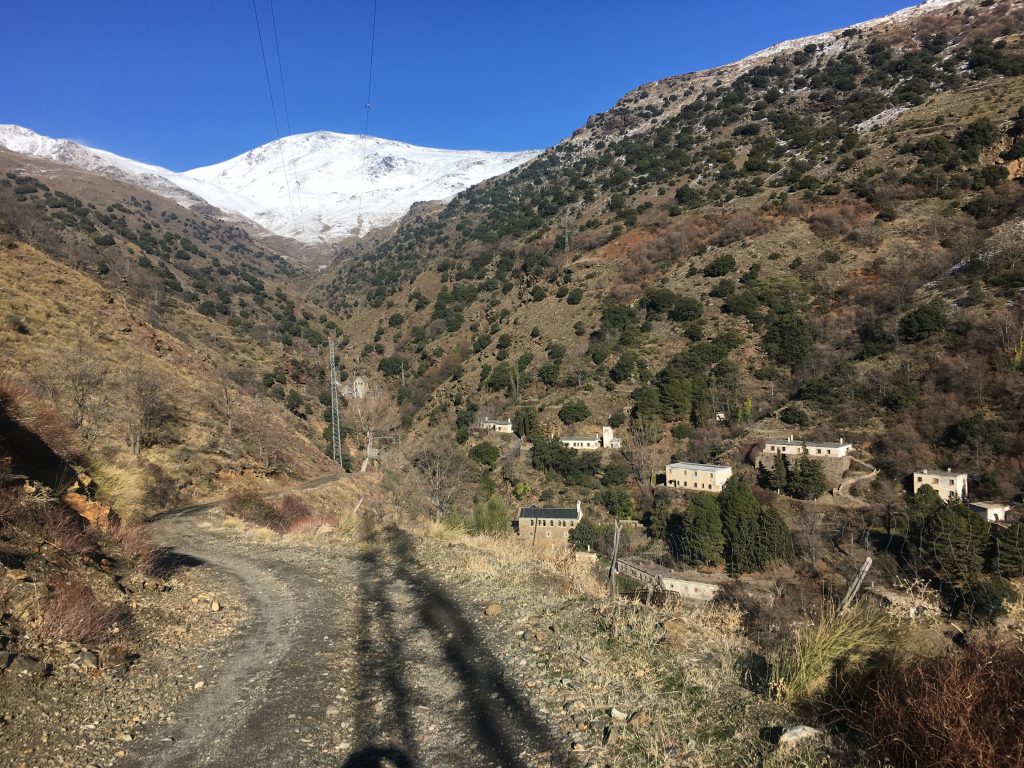 The route down took us closer to the river, we stopped on the descent as a herd of sheep and goats crossed the path in front of us, under the watchful eyes of a handful of dogs and a shepherd. We passed multiple ruined farm houses, their layout roughly the same as traditional farm houses everywhere – animals and people under one roof to share warmth – and eventually dropped right down to a beautiful shaded spot by the river. Shortly afterwards we got back to Capileira’s tourist oriented streets passing a few bars and shops. 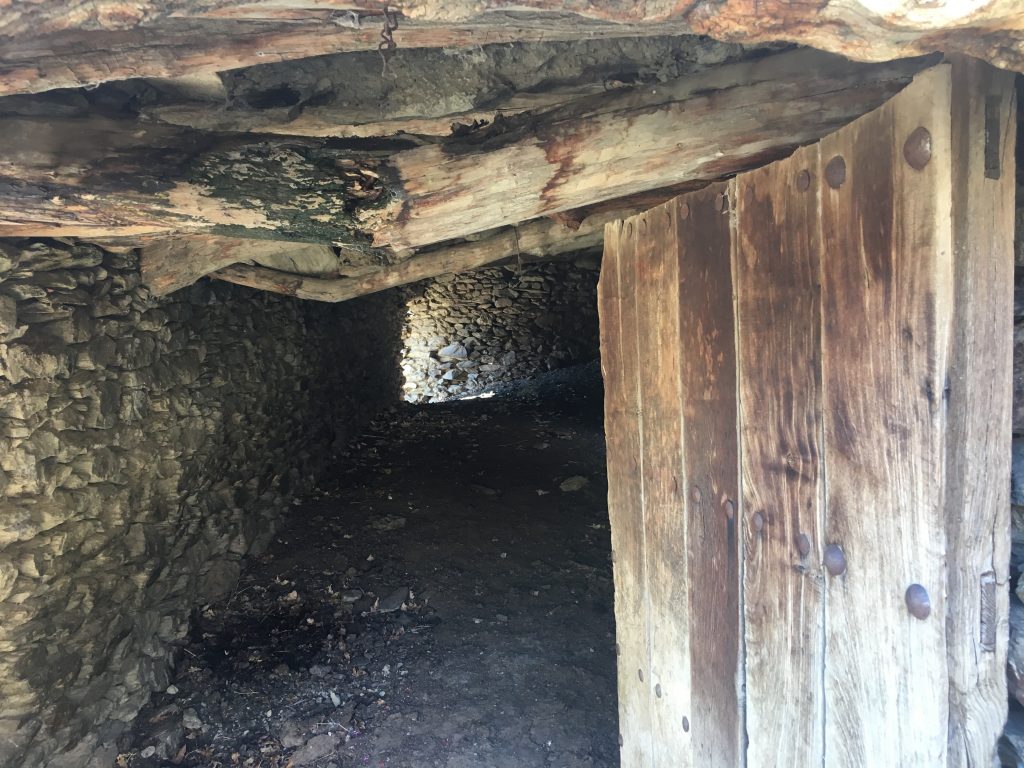 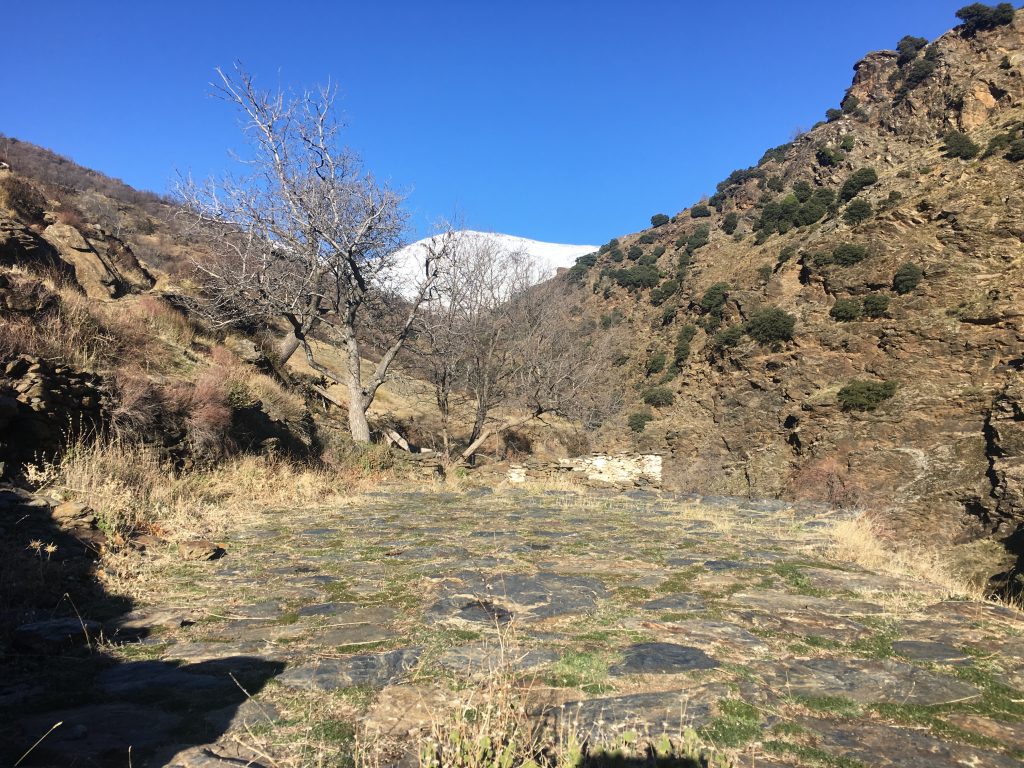 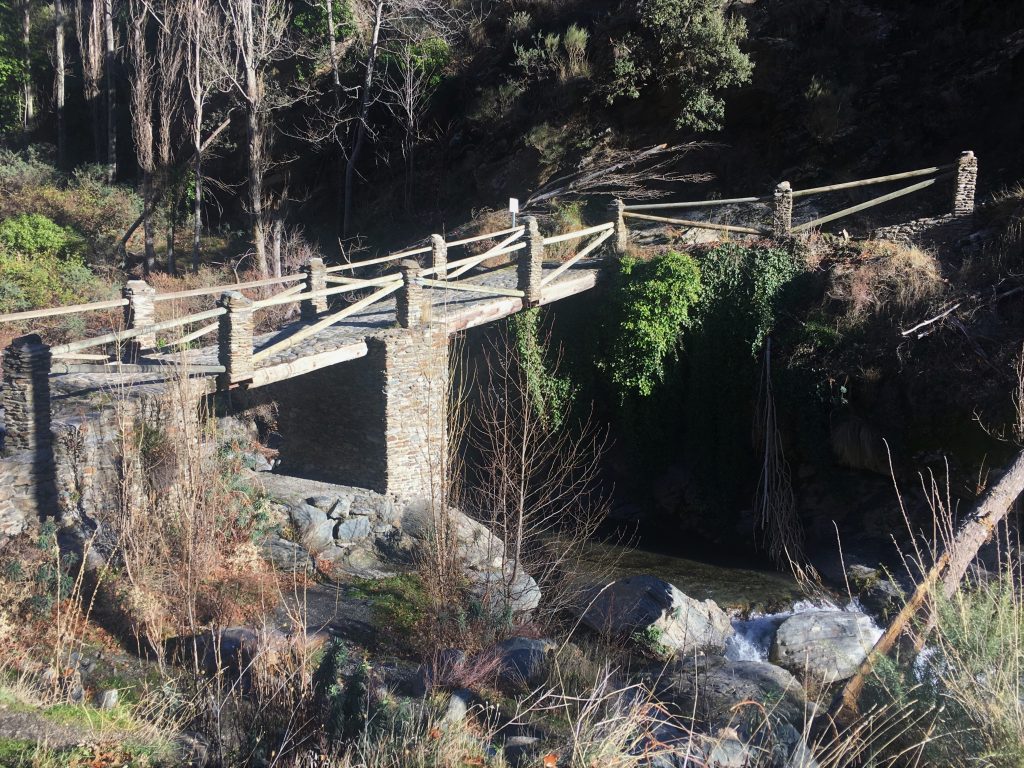 Bridge over the river, a nice picnic spot in fine weather

The howling winds later that evening forced us back down to Pampaneira to sleep in relative peace.

A Bike rider in the Western Alpujarras

The following day we drove back uphill to park near the junction to Capileira. From here our mission was to cycle to the snowline. We’d picked a midway spot to start from in case the snowline was particularly low and our ride was cut short.

There is a tarmac road that runs through Capileira up to a mirador, but we decided to save that for the descent. On the ascent we turned right in Bubion village to access one of the tracks that zig-zag up the side of the valley. Almost immediately I had to get off the bike and push, we hadn’t realised how steep the paths out of Bubion would be, and each hairpin was too much for me, as soon as I hit a rock I lost all momentum.

After a couple of kilometres of alternate pushing a cycling the path levelled out a bit to take us along the side of the valley. There was a chain across the track, but we chose to believe it was for cars rather than us. Eventually we joined the tarmac road and continued uphill. The smooth surface was a blessed relief, and I was even able to smile (maybe it came out as a grimace, but I felt like I was smiling) when someone started filming me. When the road became a track again we started to encounter patches of snow and it wasn’t long before there was snow on the road. At first it was easy to follow the bare tyre tracks left by cars, but soon we were trying to cycle on snow and ice. 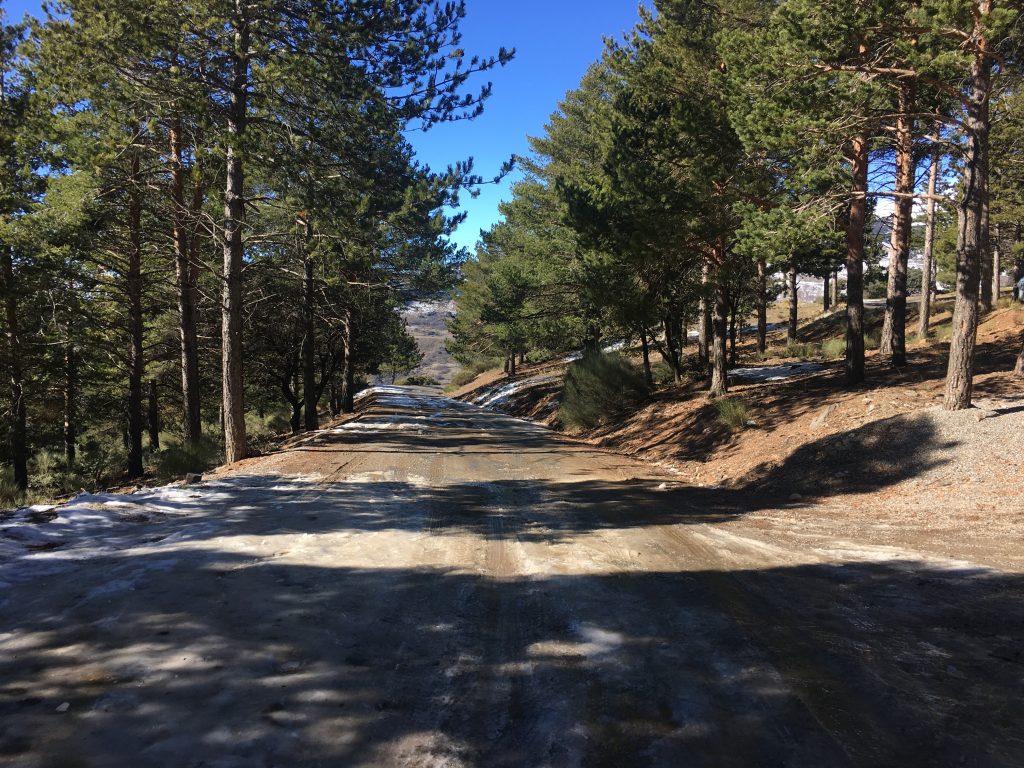 Starting to look a little bit icy on the track

We felt our objective had been achieved, it was almost impossible to cycle any further, an exceptional sense of balance would be need to avoid our bikes slipping sideways from under us. We turned around and whizzed back down the hill in about a quarter of the time it had taken to ascend.

It had been three days of short excursions and sublime views. We left feeling short changed but looking forward to meeting up with our friends. We know we’ll be back here many times in the future.