Our plan had been to leave the Cabo de Gata and head back to the Malaga area across the Alpujarras, getting some time in the hills before meeting up with friends Heather, Dave and Ruth. But the weather in the mountains was not great, an unseasonable fall of snow had closed roads for a short time and we were nervous of heading into hairpin road territory too soon.

So, we stayed in the Cabo de Gata area. There was a bit of debate about whether to head back to our last stop or to head to pastures new and we eventually decided in favour of somewhere different. So we made our way to another small town in the area – Las Negras. Las Negras had a similar feeling to San Jose, busy during the day and quiet at night and a slightly patchouli scented atmosphere. Walking around we stopped to watch a singer and guitarist outside a bar, picked up some items in the local shop and window shopped the clothes shops which definitely had a hippy clientele in mind. A nice place to spend some time relaxing. 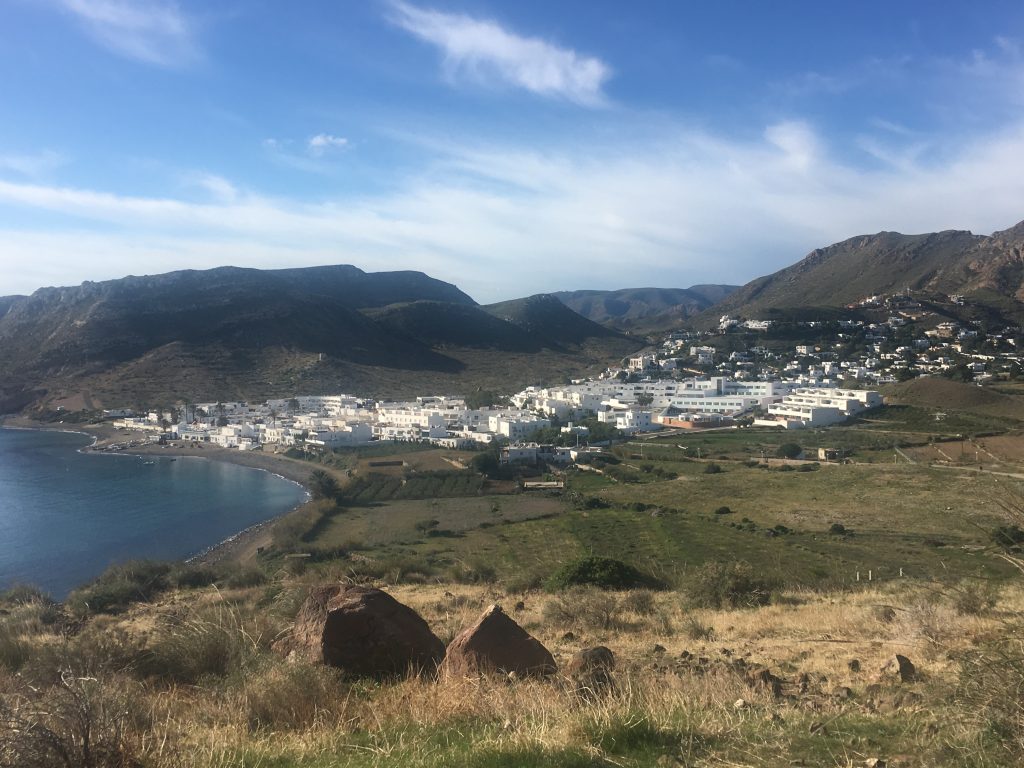 View of Las Negras from the campsite.

The motorhome parking was conveniently central although there seemed to be a two tier system going on. Van conversions and campervans in the more central town parking and shiny white boxes on the other side of a gully/stream. We stayed in the centre, it was quiet and felt perfectly safe.

We walked from here towards Agua Amarga along the cliff path, we didn’t make it all the way but walked to and around the headland past Cala San Pedro before retracing our steps to Las Negras. On the way we walked up a well made track that we could have easily driven Bertie up, about 3km along this track was a large parking area where a number of vans were parked. After that point the next 3km was impassable by car although we did meet someone on a trail bike. 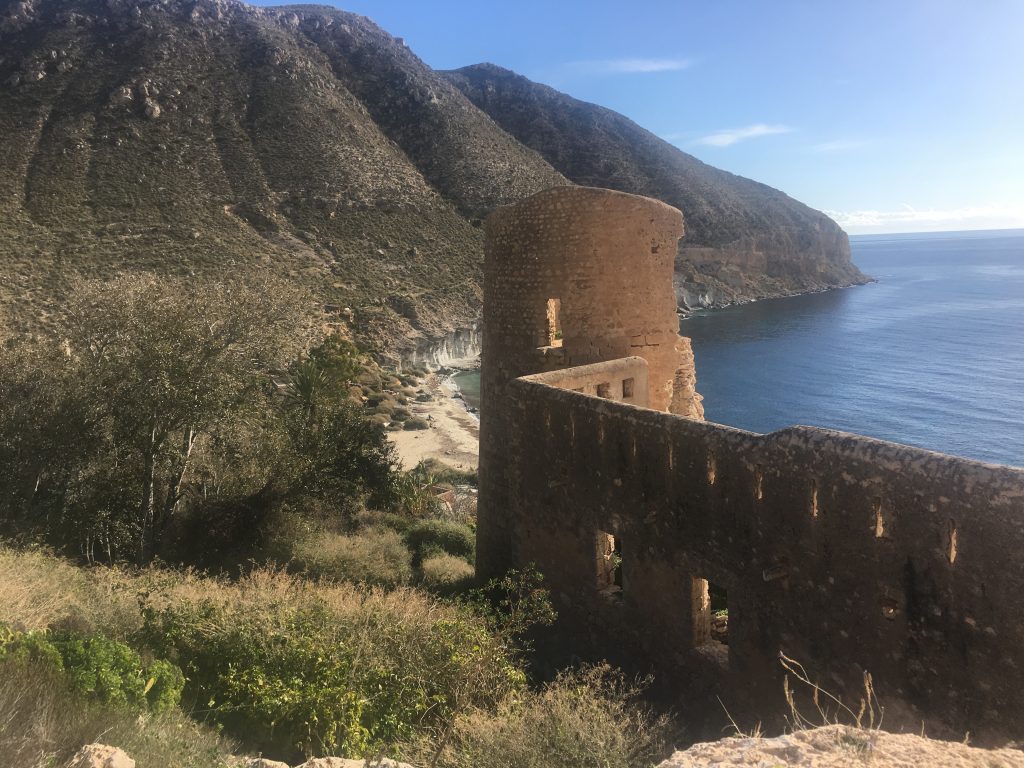 We had been intrigued by Cala San Pedro after seeing it from the Kayak, the reality  is an odd place, an abandoned village, unreachable by car, that has been appropriated by hippies living in a communal style. The dwellings were of various constructions from restored village houses, through tepee covered with local vegetation to one-man tents. I wondered how the decisions had been made about accommodation, surely there wouldn’t be a hierarchy. It was neat and tidy, the paths had been lined with rocks and an aqueduct ran water down to a small reservoir at the top of the village, composting style toilets were well marked throughout. We lost the path on our first pass through and ended up wandering around the village, not quite sure how much privacy people wanted. Fences had been erected in some places, but in others the paths cut through cooking and living areas. Fortunately it seemed quiet with just a few people on the beach and working their plots of land, the only sound the bees buzzing loudly around the plants. As we walked up the slope beyond the village we talked about it’s appeal. A beautiful location but a hard life if you are trying to subsist. Despite the valley’s reasonable fertility it still looked dry and desiccated by UK standards. The occupants must have some way of ensuring they can obtain necessities. 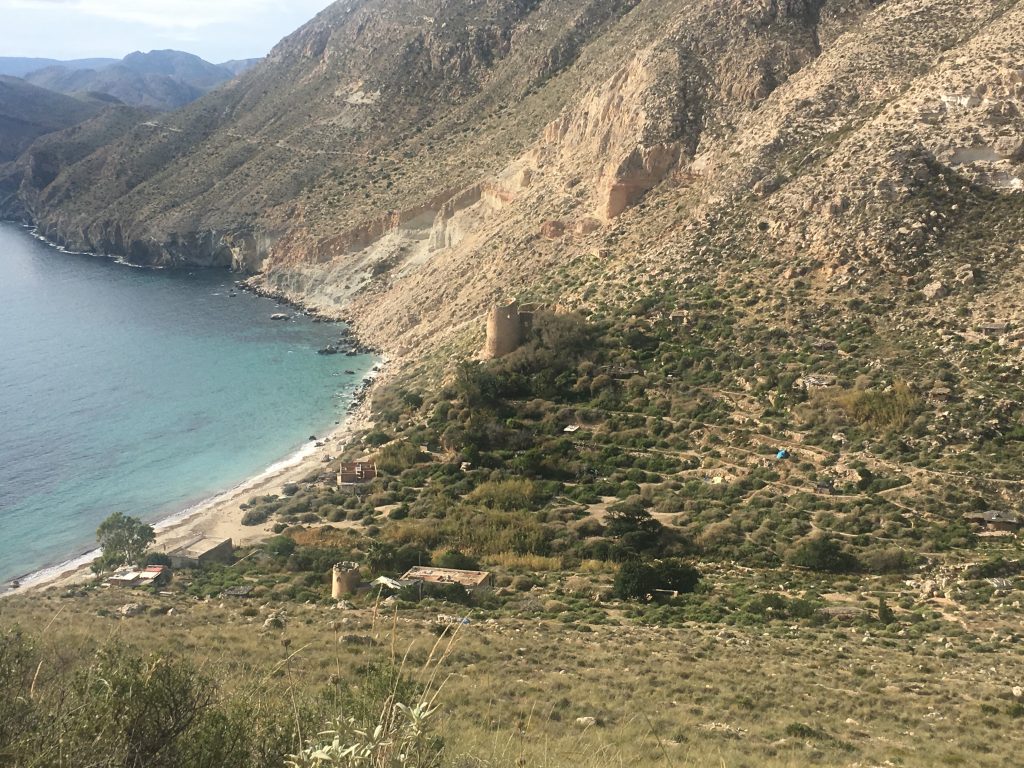 Looking down into the village from the Agua Amarga side

After walking around the headland with views north and south we made our way back through the village which had livened up, the sounds of conversations and more people on the beach and in the communal spaces. The predominant language seemed to be German, we sat on the beach again and fed the sparrows the crumbs from our lunch. 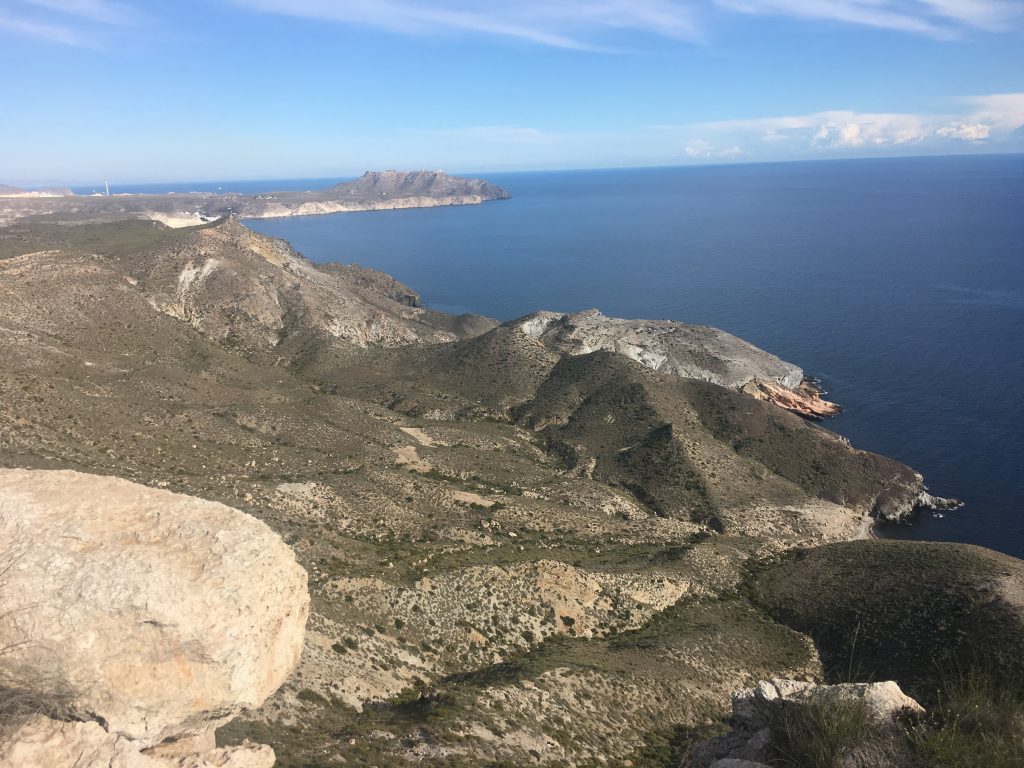 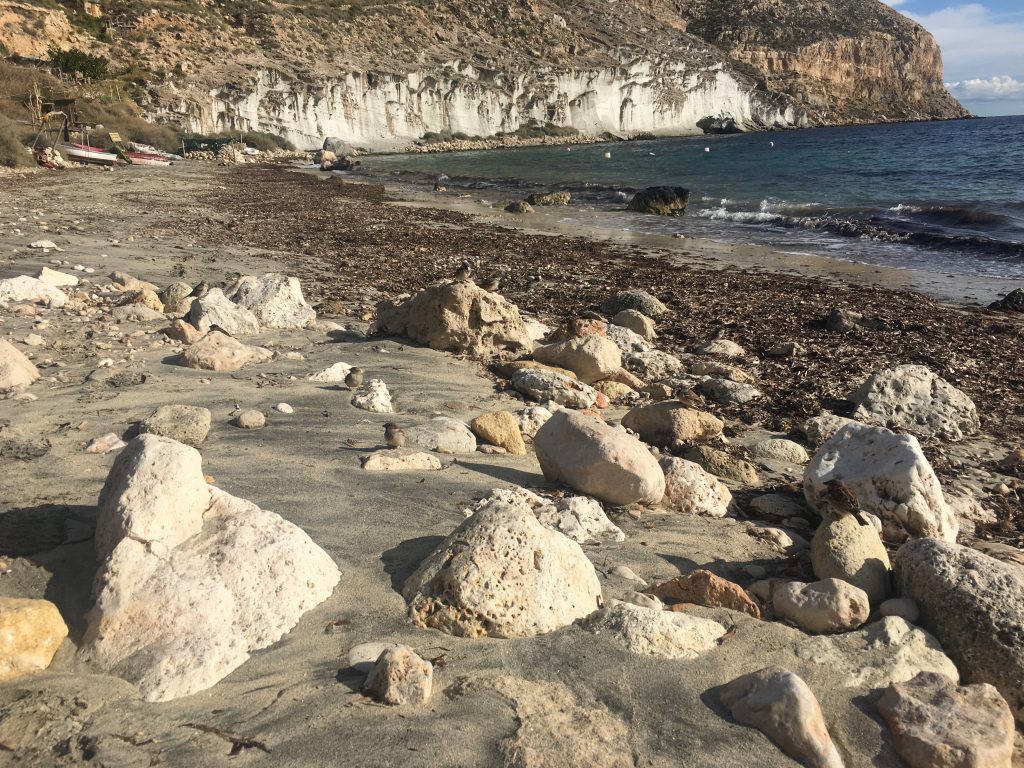 The beach at Cala San Pedro

Finally it was time to move on and approach the hills.

1 thought on “Linger a Little Longer”