North of Huelva, the town of Aracena sits in the folds of the Sierra de Aracena; gentle forested hills and mountains that form part of the wider Sierra Morena mountain range. Towns and villages are scattered amongst the hills, the population relying either on agriculture or mining for support. It is an area renowned for the ham from it’s Iberico pigs which root around under the canopy of the cork oaks.

Our arrival had been largely uneventful apart from a slight contretemps with the satnav and we had spent the night in the large market parking area with a couple of other Spanish motorhomes. There was a Mercadona supermarket and a Lidl in the town, so we stocked up – Paul being especially happy to find that the Mercadona was stocking cider from the Asturias region which met his benchmark of being ‘proper’ cider.

Aracena has a castle sitting on a conical hill at the edge of the town, so we took a quick stroll up, it was closed and seemed to have odd opening hours ie it opened on the hour to let people in. We contented ourselves with a walk around the walls before descending back to the Tourist office where I bought a map of the area. I expected more for my €4.50 than a glossy pamphlet, a contour line or two maybe, but it felt churlish to hand it back. 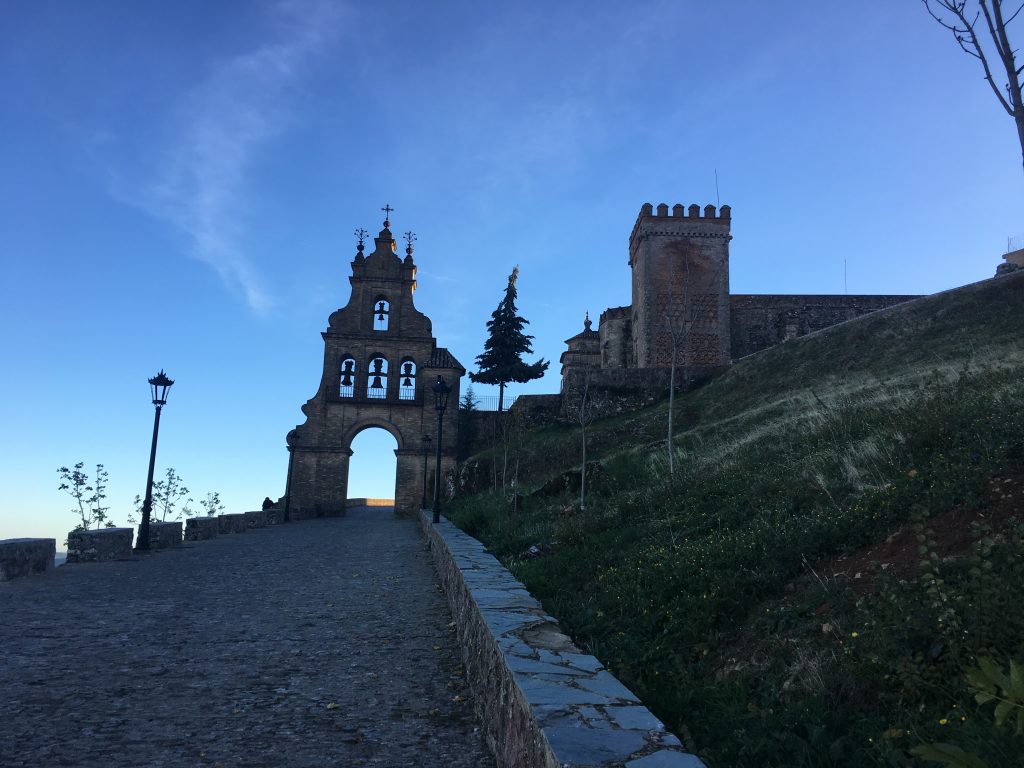 Aracena bell tower, church and castle all sit on top of the hill at the edge of the village.

We had fancied some time in the mountains, but to be honest the hills of Aracena didn’t really meet our requirements. We did have a lovely walk following a marked trail

out to Linares and then up to Los Marines before returning to Aracena, but it was rural rather than mountainous, following old farm tracks between the villages taking in cork oak forests, rooting pigs, herds of sheep, sharp horned cattle and a couple of chicken farms. We did attempt to branch off at one point to reach the high point of the ridge but were thwarted by fences and a quarry and ended up having to push through brambles and other spiky things to regain the path. The path was marked with slate markers or wooden makers and the numbering bore no resemblance to the numbers on my map! 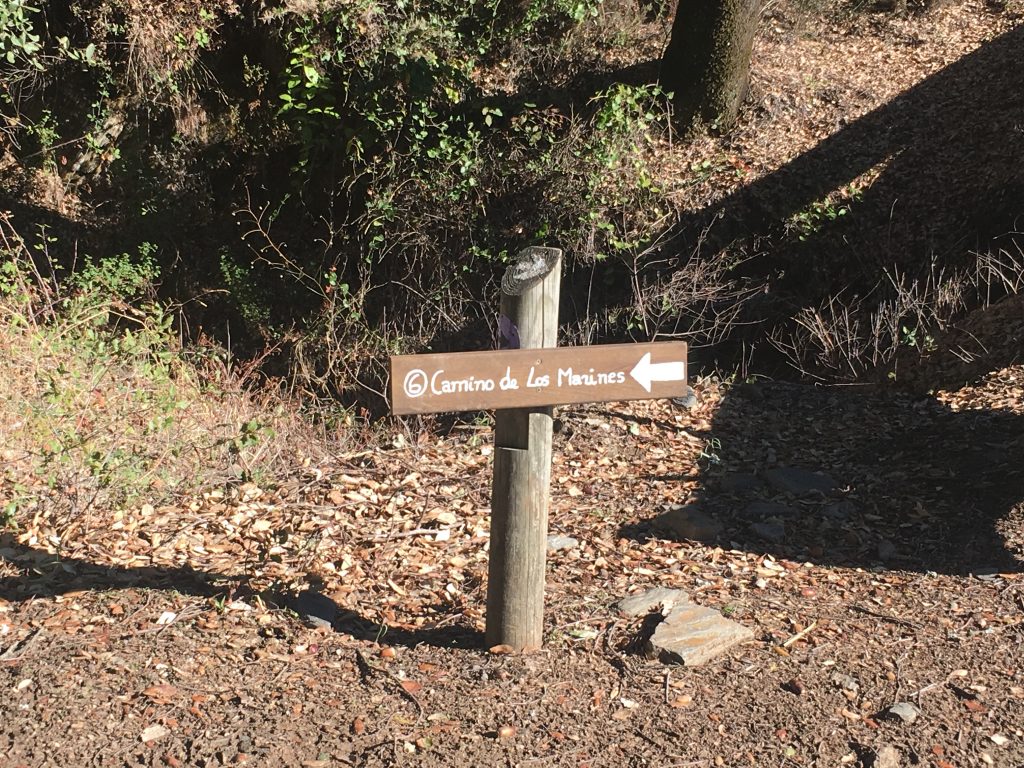 Signposting on the Aracena paths 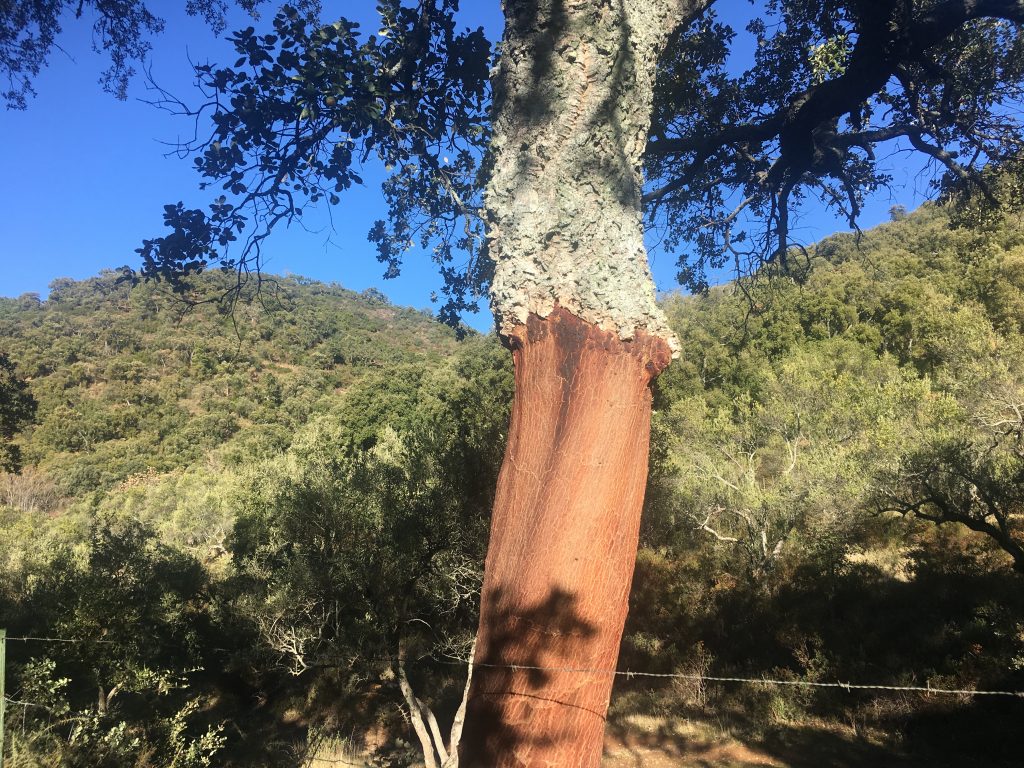 Denuded cork oak, the red colour is natural and gradually fades as the bark grows back. Cork is harvested from each tree roughly every 7-9 years.

From looking at the other marked paths in the area we knew that rural was likely to be the character of most of the walks. We decided that we wouldn’t linger to do any more walks here but would move onto another area for our mountain fix. It was a pretty place but not quite to our expectations. Of course we picked up some Iberico ham before we left, we’re not daft. 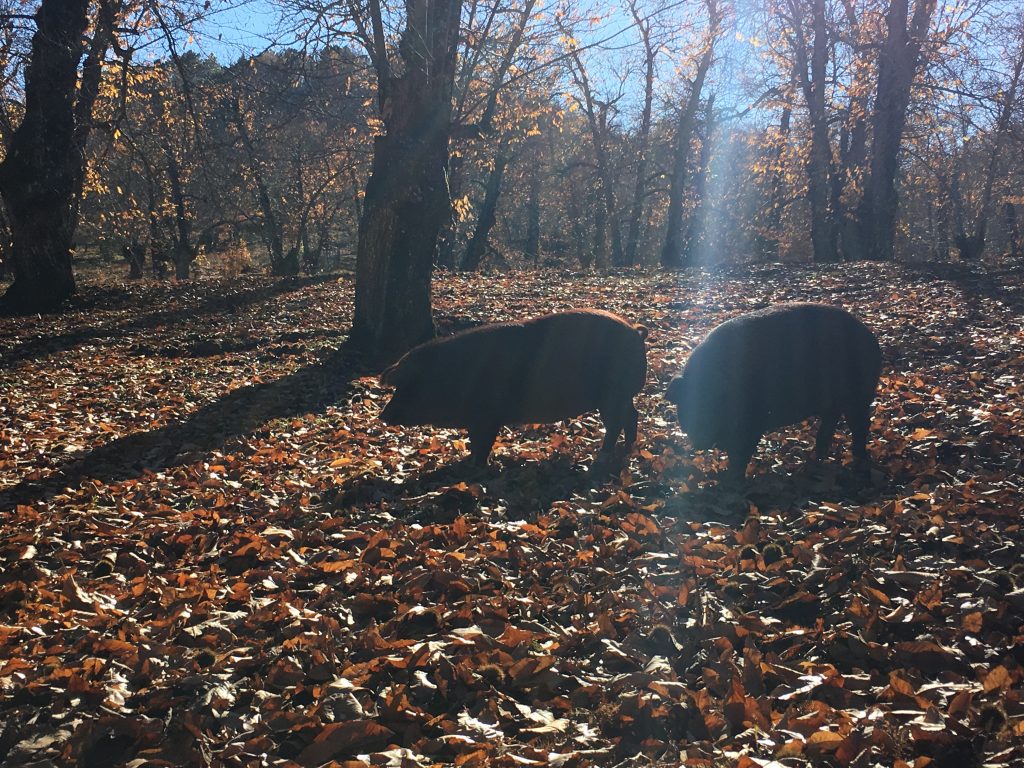