From Aracena we decided to head south towards Seville, on the way we were planning to visit Italica, a Roman city that has been partially excavated near the current town of Santiponce and was the birthplace of emperor Hadrian. Many important pieces, sculptures and mosaics, are in the museum at Seville, but there is something about seeing an ancient city in situ that it is far more impressive than seeing individual pieces in well lit museums with their accompanying explanatory placards.

Not that it wouldn’t have been useful to have some explanation. There were a few boards by the main buildings but remarkably little to help us make sense of the large site – I found out later that there is a guide book for 10 euros which, given that entry was free for EU citizens, would have been worth buying. Anyway, we spent a few hours here walking around the ruins and drawing our own conclusions, later ratified (or not) by the internet .

The main building is a large amphitheatre sitting just outside the Roman city walls. It is the third largest Roman amphitheatre in the world, according to some, large enough to hold more than the estimated population of the city (it’s believed it was the main amphitheatre for the whole region, attracting people from Roman Seville). You can easily see the amphitheatre on google maps looking like an eye staring out at you. 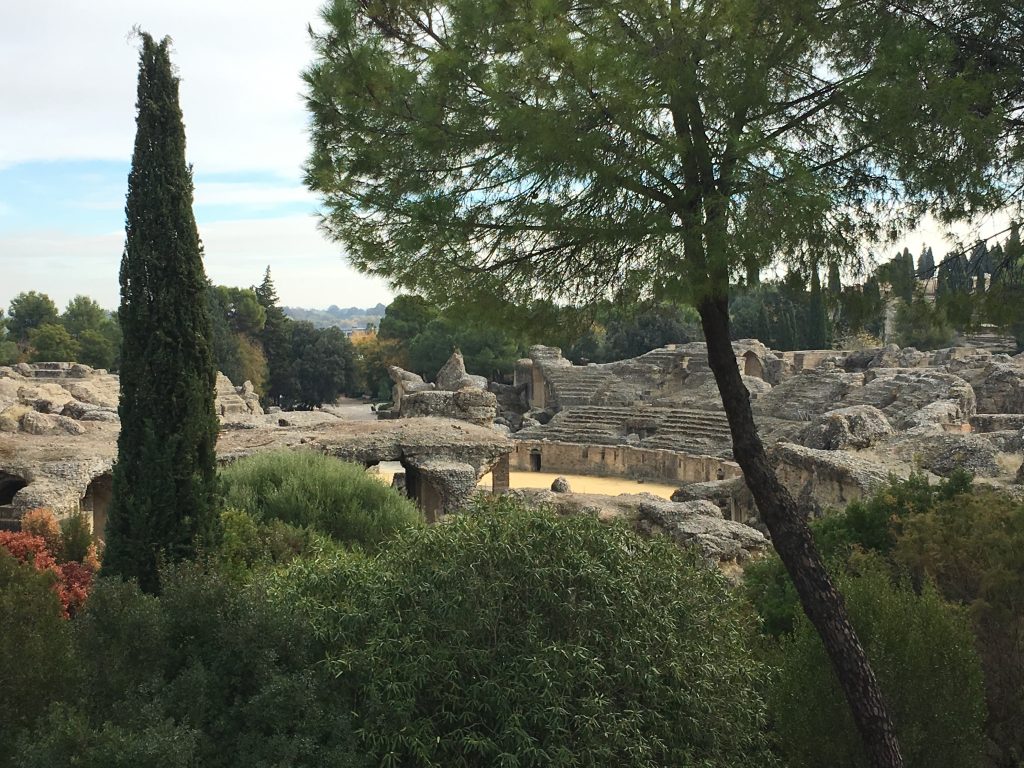 View of the amphitheatre through the trees 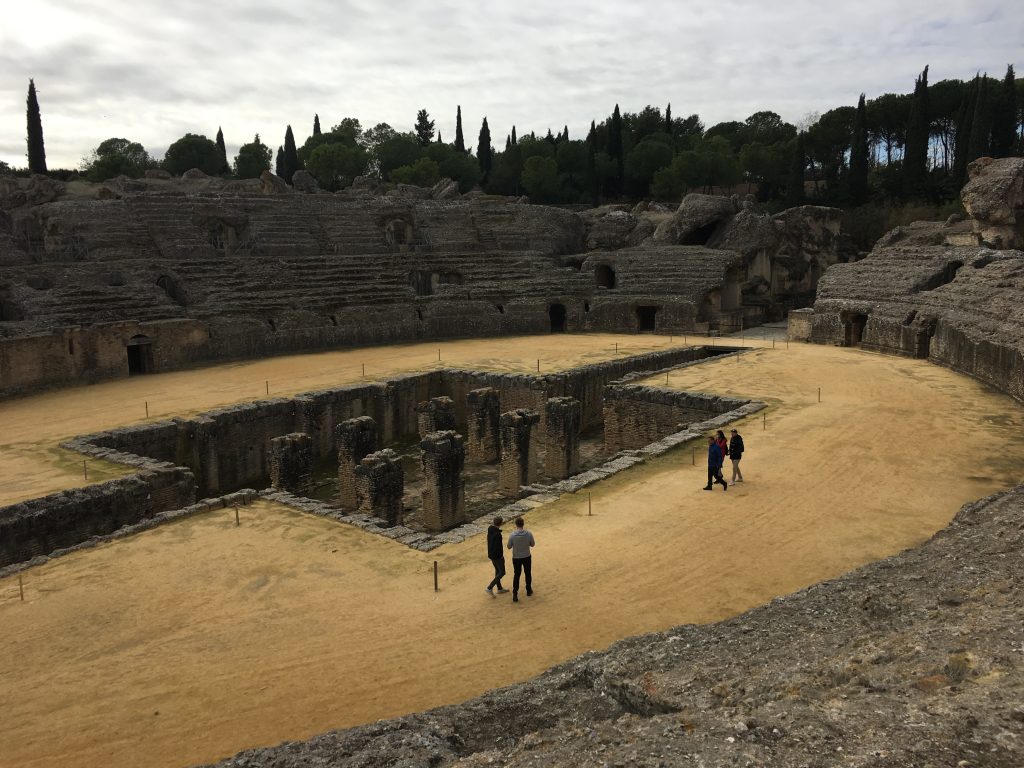 View of the central pit from the amphitheatre gallery 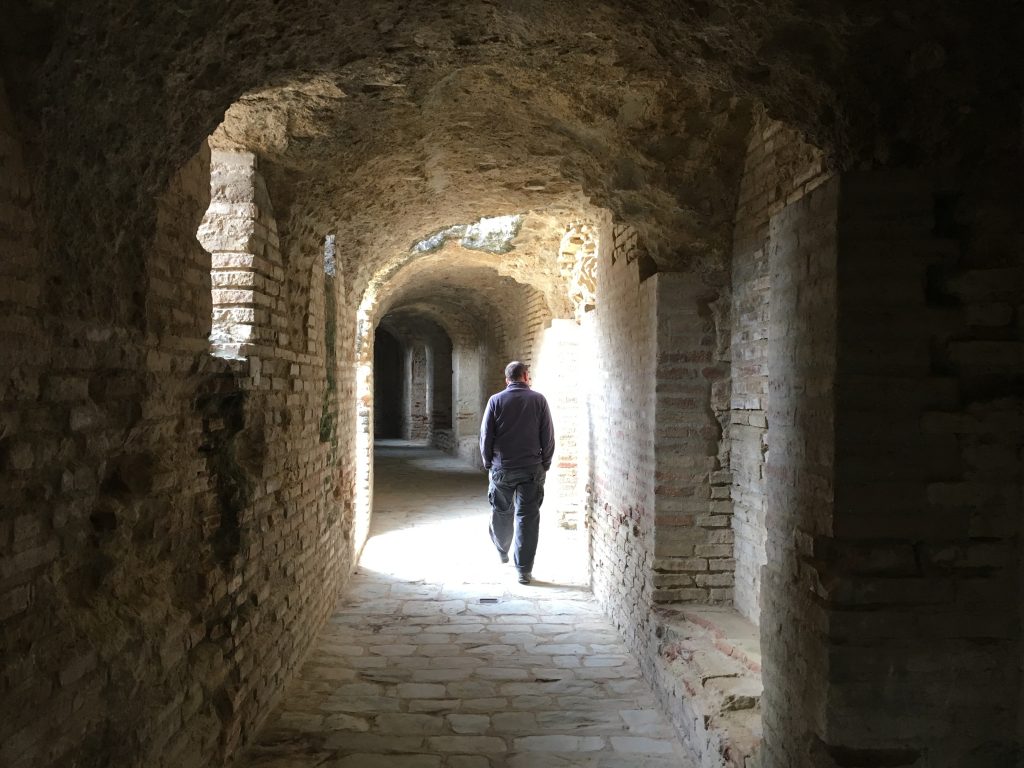 Valking through the corridors of the amphitheatre

Inside the city walls you can walk down streets paved (in part) with the original Roman slabs and see the outlines of the villas that made up this area. A few villas have beautiful mosaics in place – some restored onto flat surfaces and some still sitting on the original surface now distorted with time. We spent some time watching conservationists who were working on one of the buildings using tools that sounded like they came out of a dental surgery – I wonder how they feel working in such a public setting on something so delicate, I would prefer to be hidden away. To one side of the site is an aqueduct that once channelled water to the city and, for the privileged villas, brought it directly into the buildings. 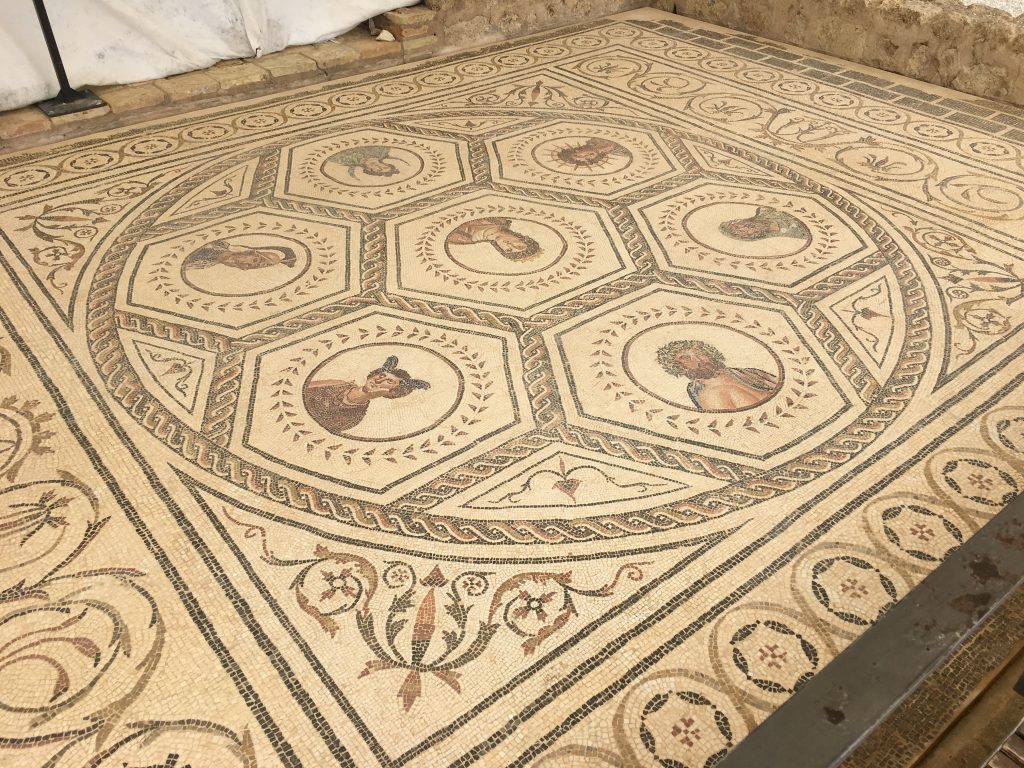 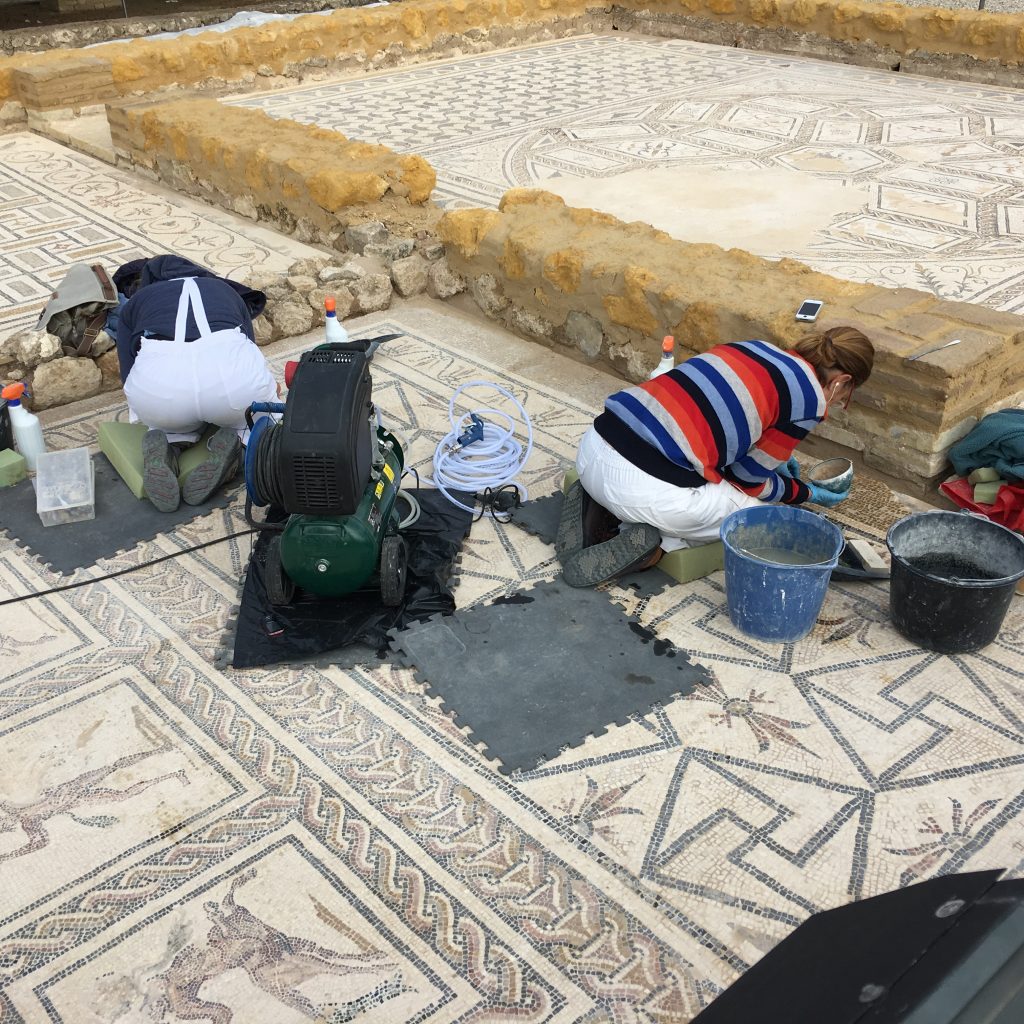 Hard at work restoring a mosaic 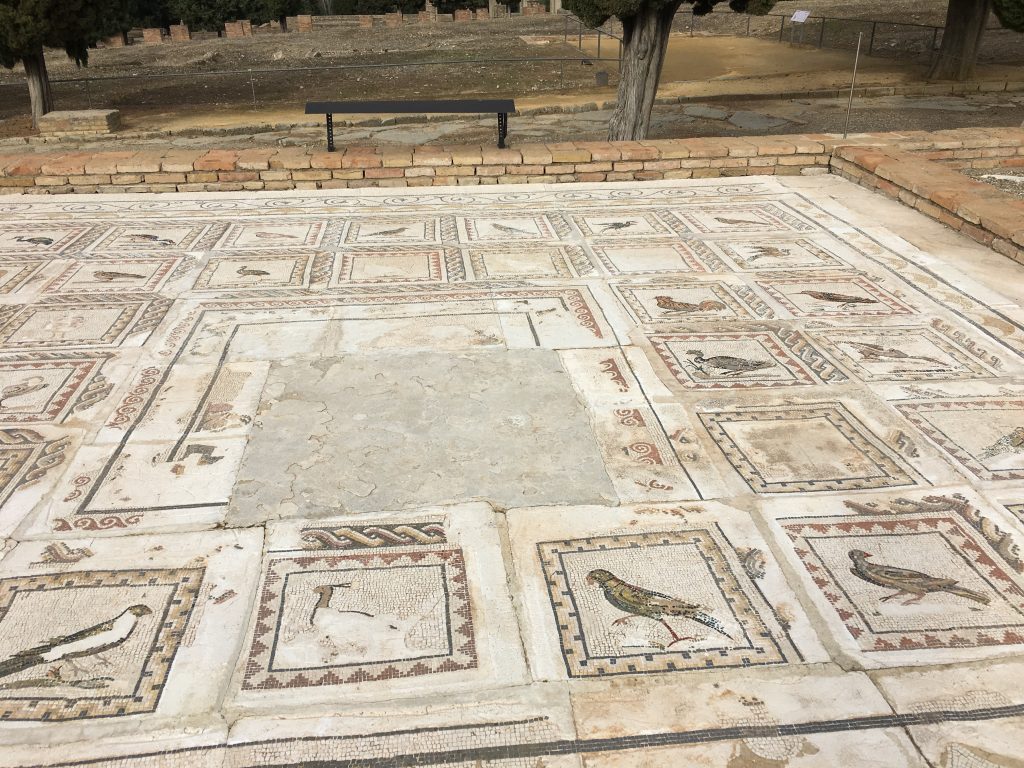 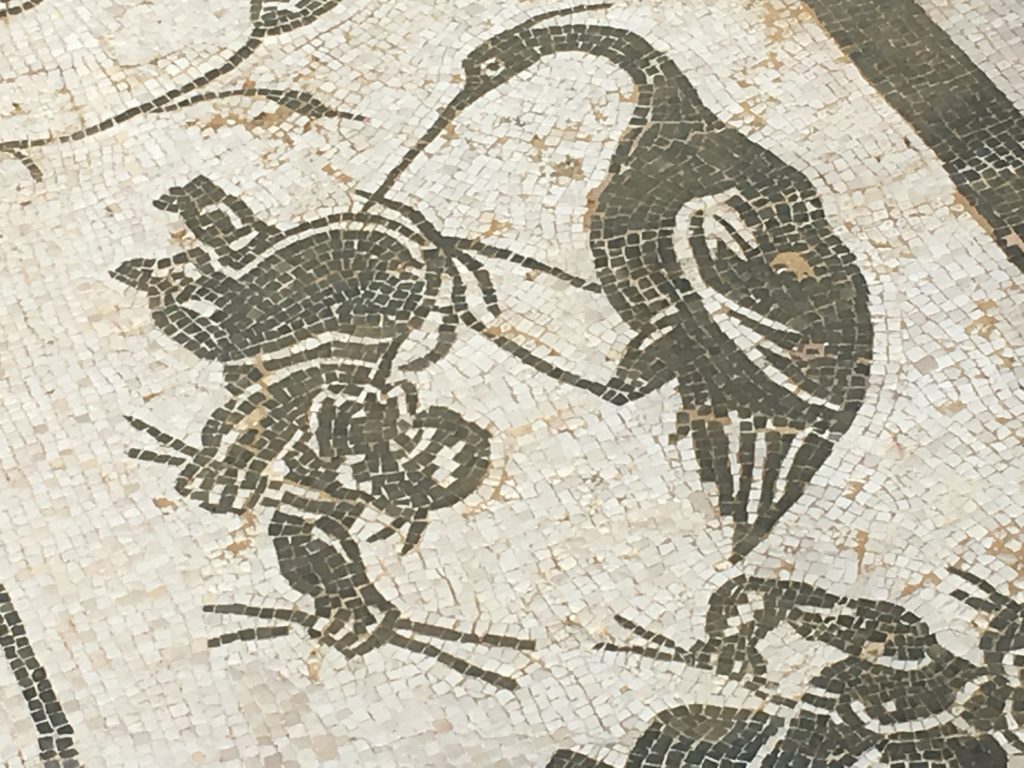 We weren’t sure what was happening here

As with many Roman cities, in previous centuries the ruins were plundered for their dressed stone, but because the river silted up the site could not continue to support a large population so the ruins were better preserved than some. 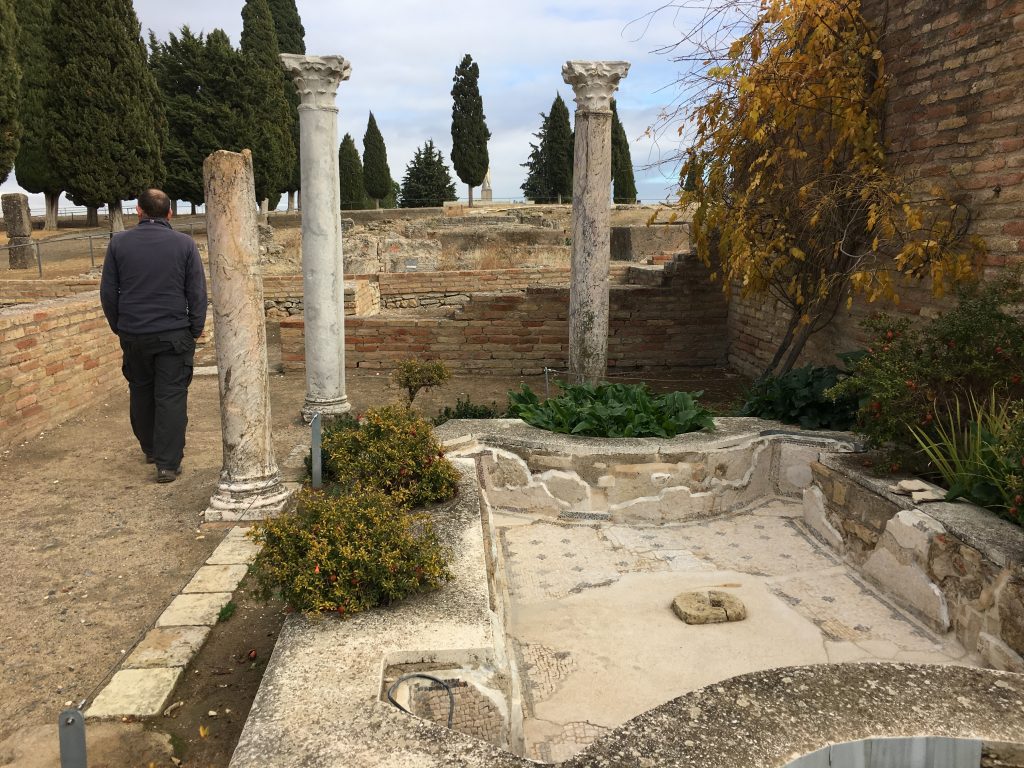 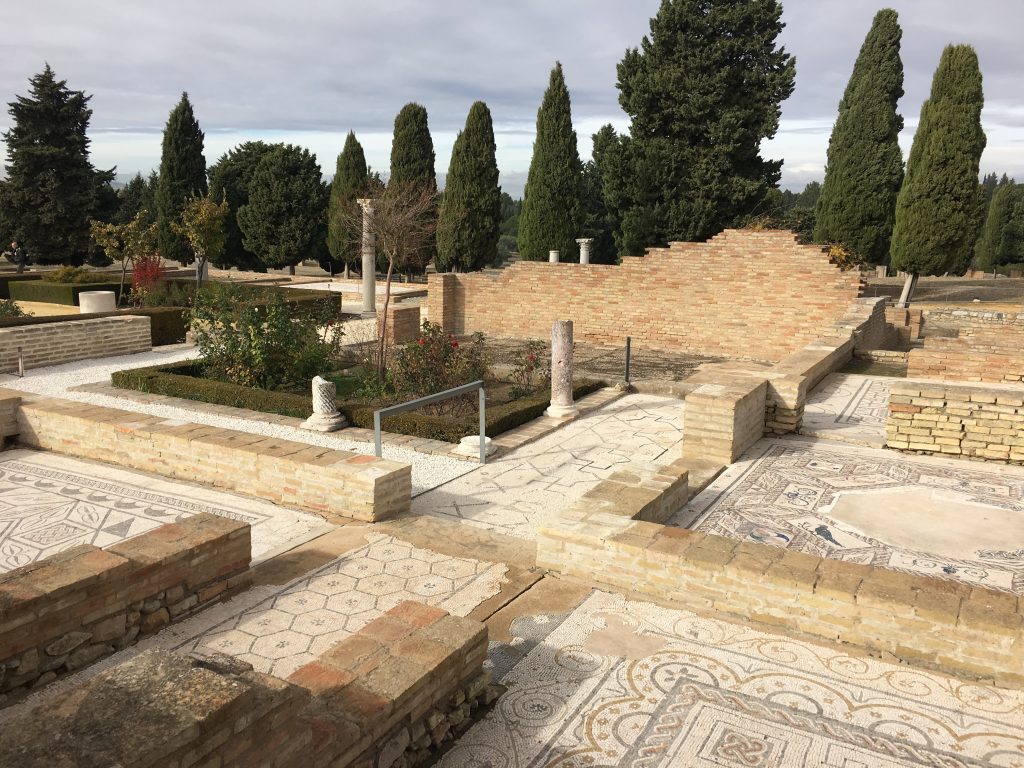 That afternoon we moved onto Seville, we’d had a quick stop to deposit waste and refill with water at a Repsol garage so that we could park near the centre of Seville at a site we knew didn’t have any facilities. After missing the same exit off a roundabout TWICE (not a sat nav issue this time, our own stupid fault) we finally managed to find the car park with the friendly attendants directing us into a spot with a view of the river where we whiled away the evening watching the activity on the river and beyond and preparing ourselves for an assault on Seville.