At the end of our day in Seville our mobile devices told us that we’d walked over 9 miles, which I can believe as my feet were aching. A day in a city can be as arduous as any mountain walk.

This was our best city day so far, both of us relaxed and a good selection of sights to see. It’s hard to put my finger on what makes a good city visit for us as a couple but Seville hit the sweet spot, neither too big or too small with a calm atmosphere that allowed us to wander without feeling unsafe or pestered, even when we wandered alongside the river through a less than salubrious area where homeless people had laid claim to the shelter of the bridges.

We started the day by walking from our parking spot across the river and through the park to the Plaza de España where we whiled away half an hour looking at the various tiled niches that exhibited each province of Spain. I think I may have a better grasp of Spain’s geography now. 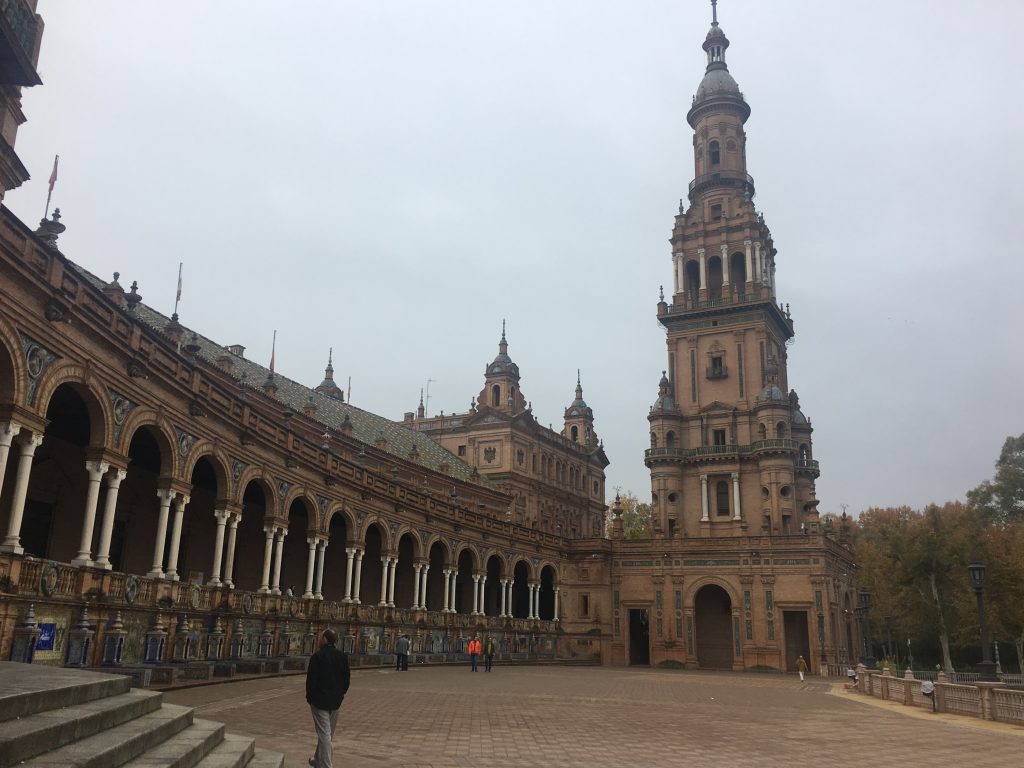 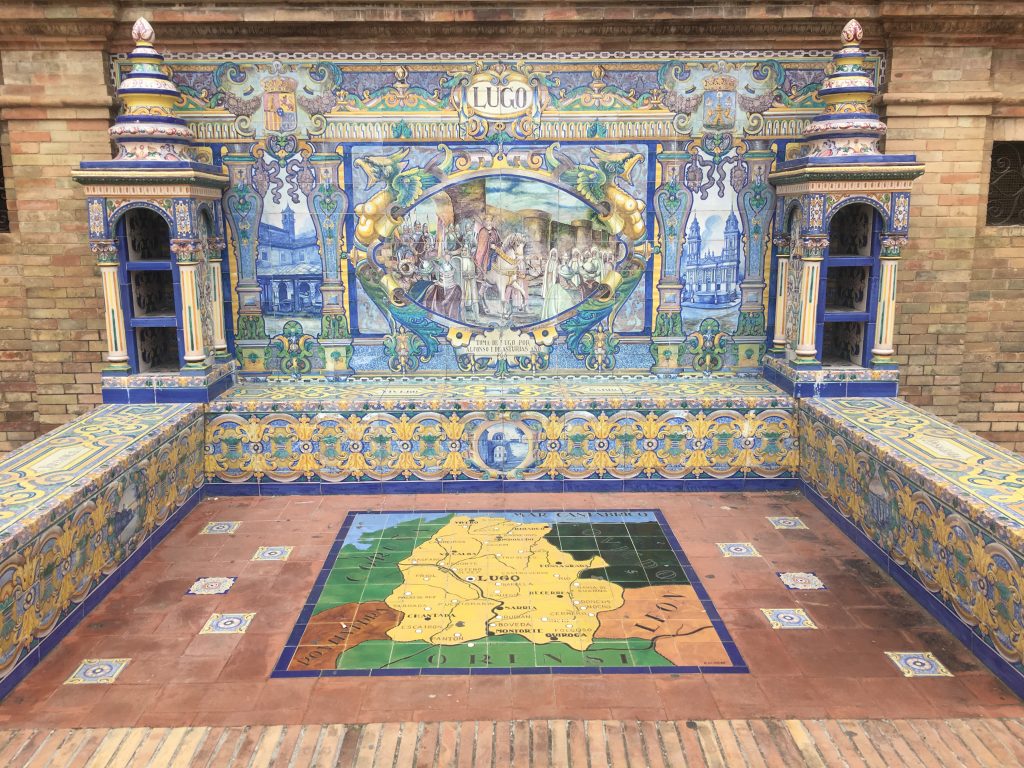 The niche for Lugo – we had visited the Roman city of Lugo earlier in our trip, before Portugal

Once we’d dodged the mounted policemen with their beautiful horses and the Gitanos selling lucky heather around the plaza (Gitanos are Andalusian Romany people and there is a large population in Seville), we moved onto take a quick look at the university buildings – previously the Royal Tobacco factory made famous by the opera Carmen. It was just a quick walk through on the way to the Alcazar.

The Alcazar in Seville is a Royal palace, still used occasionally as residence for Spanish royalty. Started in the 1300’s on the site of a Moorish fort it has been extended and added to over time. Much of the architecture and interior design is Mudejar – Christian adaptation of Moorish influences – but there are some other elements including gothic and renaissance. Plus it has extensive gardens which weren’t at their best due to the time of year but still pleasant to wander around. It is difficult to adequately describe how ornate, ostentatious and beautiful the palace is, and I don’t have the skill to capture it in photographic form; it has a combination of incredibly intricate detail amongst the structural elements and I could never decide where to focus. We paid the extra for the audio guides which were a great help, although we had sore ears by the time we had made our way around the building. We didn’t pay the extra to see the current royal quarters and to be honest we didn’t really have the energy to do any more after the main palace. 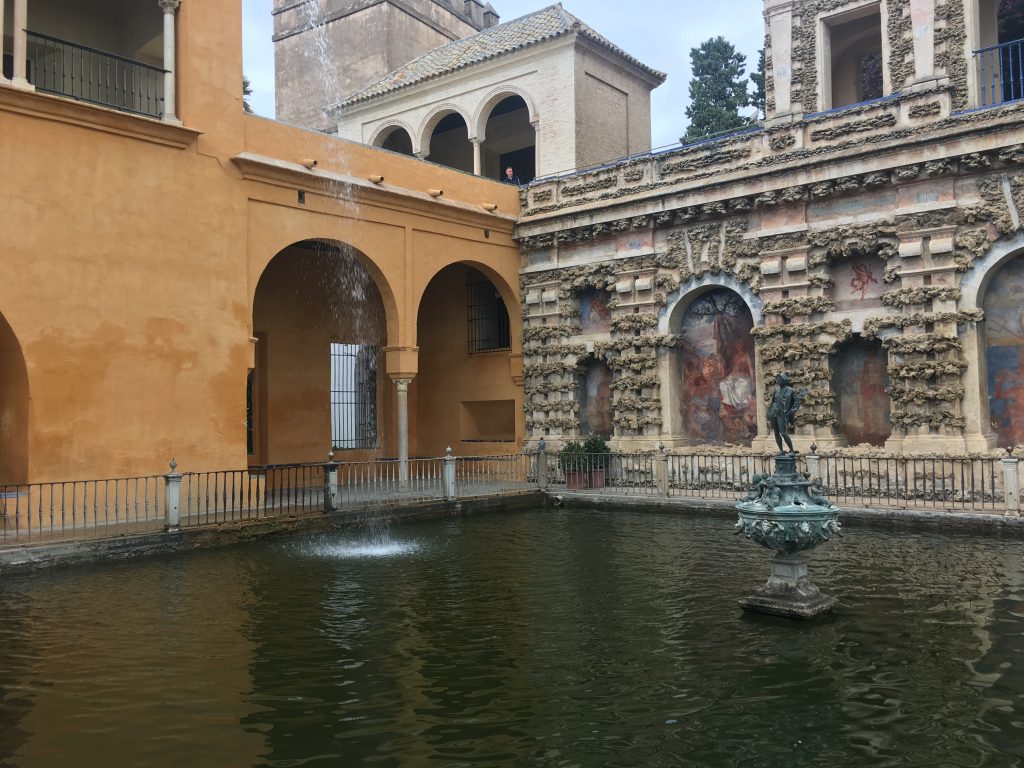 The Mercury pool and fountain 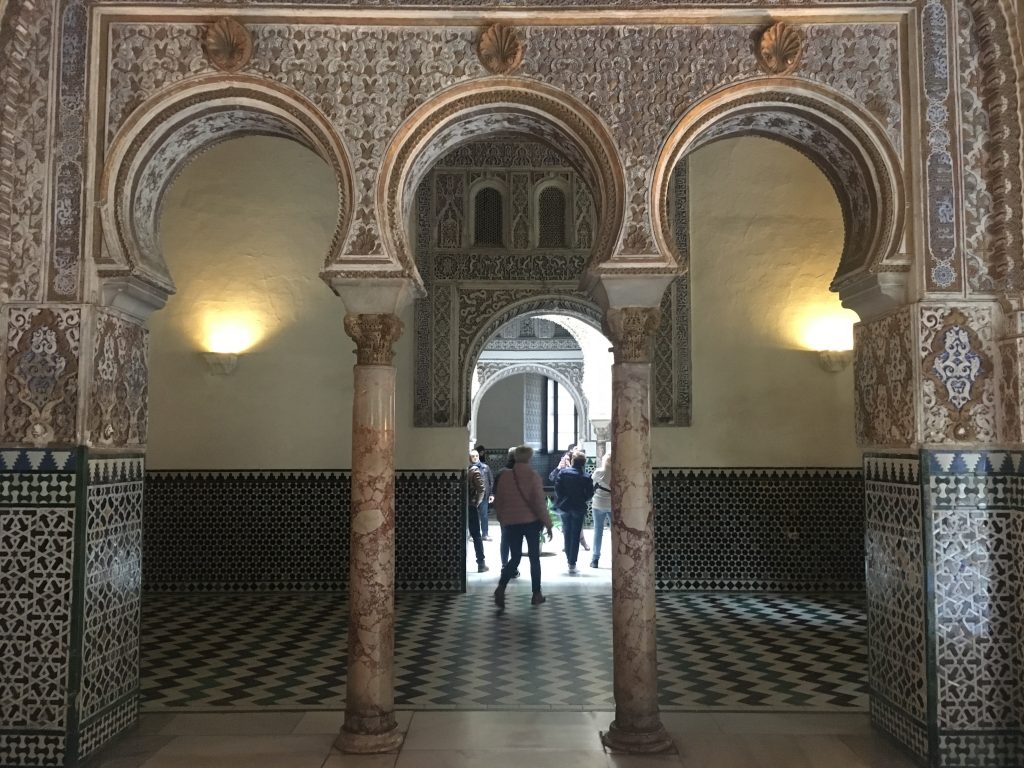 Arches leading to the Hall of the Ambassadors 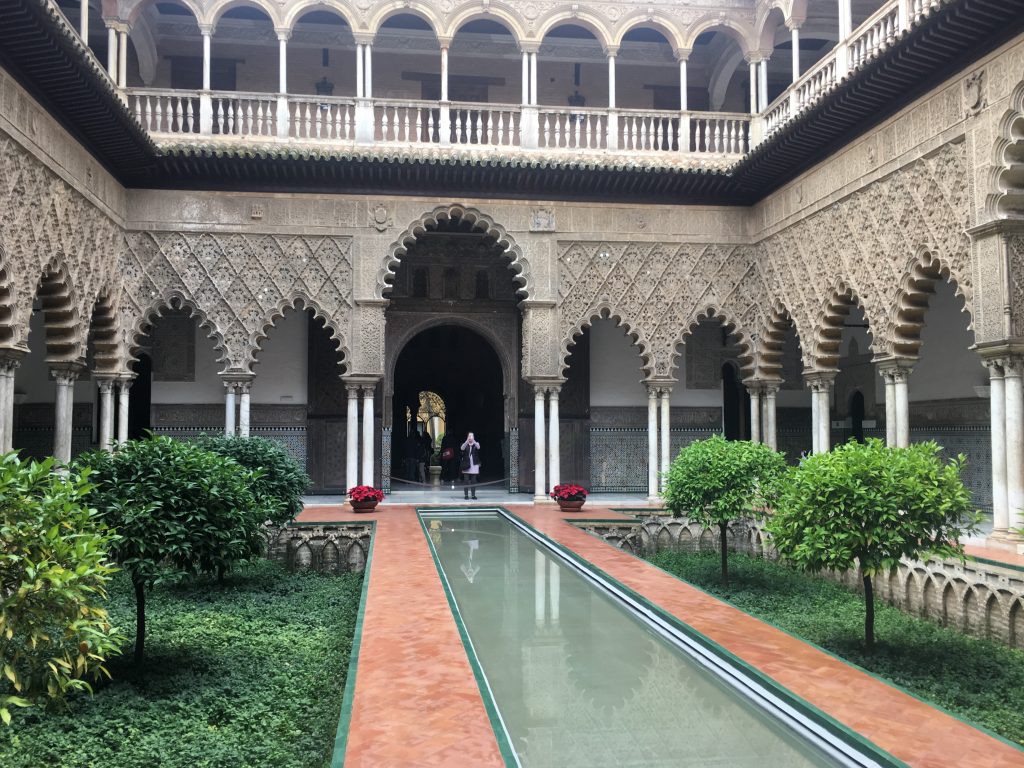 Courtyard of the maidens

After the Alcazar we stopped to relax and have some lunch at one of the many restaurants that line the streets of the old city. We took our time over tapas and a glass of wine (for me anyway) before heading onto Las Setas. It was siesta time and many shops were shut, parents were walking their children back from school and bars and restaurants were full.

The Metropol Parasol is a wooden installation in Plaza de la Encarnacion, a more modern part of the city and is nicknamed Las Setas (the mushrooms) because of it’s shape. I remembered seeing this on a Rick Stein programme and wanted to walk along the top of the structure to see the views of the city. We took some time trying to find the entrance, lots of people on trip advisor had noted how hard it was to find but hadn’t given any guidance on how to find it. The answer is that you have to go to the basement, which can be entered down wide steps from the northwest or southwest corner of the square and is signposted to the Antiquarium. If you enter from the north west you come to the Antiquarium first on your left and then the kiosk for the lift to the Mirador.

Having finally found the entrance – taking in the market (almost closed) and ice-rink (puddle) – without having an argument we both felt pretty ebullient. We wandered around the walkway taking in the views and the sunshine. It doesn’t cost much to get in, at €3 it was worth it and you also got a euro off a drink at the bar at the top (not a free drink as the ticket says), we couldn’t say no. 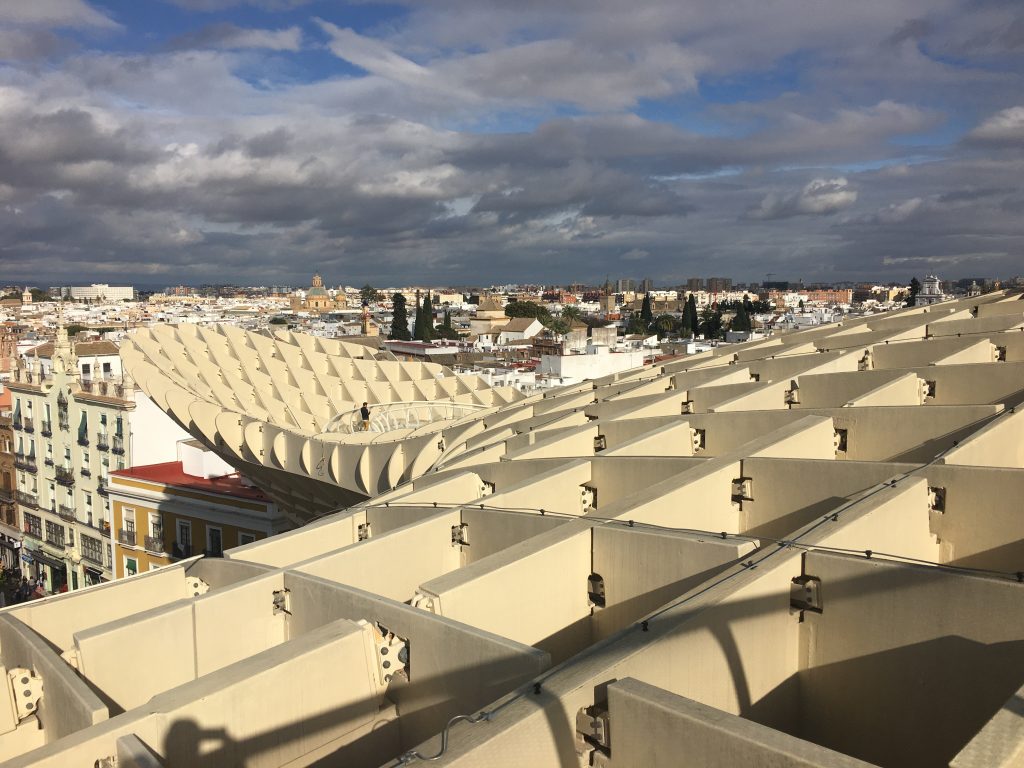 Views across the city from Las Setas 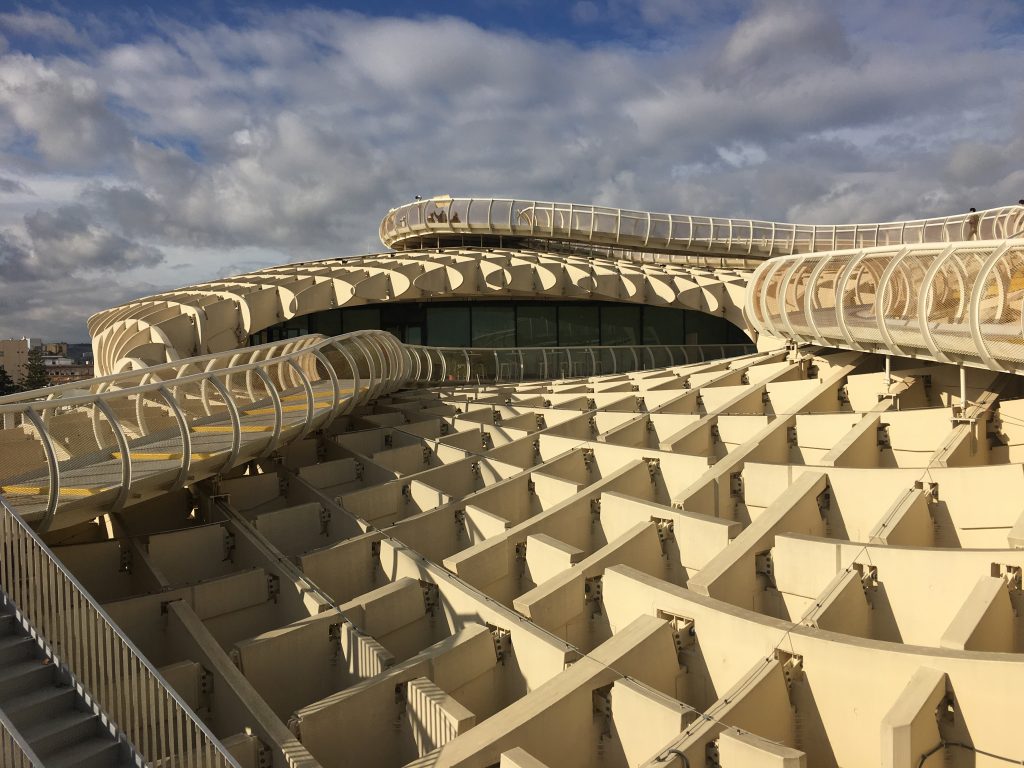 The structure is constructed of Finnish birch wood and walkways wind around it, quite impressive from above

Our Alcazar ticket gave us entrance into the Antiquarium, an underground museum housing some of the finds from excavation of the plaza when they erected Las Setas. Many of the electronic displays were not working and there was a pervading smell of drains from being in the basement. Nevertheless what we saw was an interesting insight into a working area of a Roman city, we only spent half an hour and I wouldn’t make it a focal point of a visit, but as it was essentially free…

At this point we didn’t feel like visiting any more sights, so we decided to wander back along the river to the parking spot, passing the bull ring and the Torre del Oro on the way. We wound through narrow streets down to the river where we walked, initially through some run down areas until we hit the more tourist oriented area around Puente de Triana.

We took in the bull ring from the outside, the white walls and yellow door/window surrounds are typical of a number of buildings in Seville. We’d discussed bullfighting the night before; neither of us are supporters of activities that inflict unnecessary cruelty on animals purely for entertainment (Celebrity Love Island anyone?), but we recognise that bull fighting is a part of Spain’s cultural identity. Anyway it was one of ‘those’ conversations, and the outcome was that we recognised our hypocrisy as meat eaters and leather wearers but we didn’t want to see a bull fight or any bullfighting memorabilia. 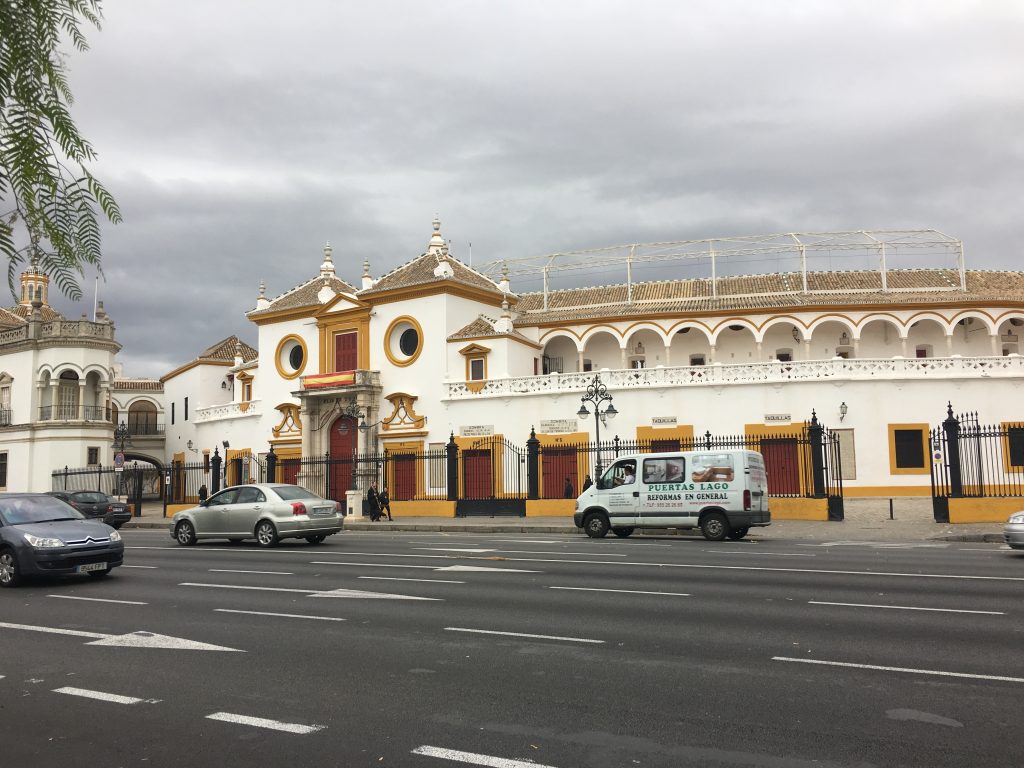 Plaza de Toros de la Maestranza – the bull ring of Seville – taken from the opposite side of the road to get a good view of the building, but also the cars and vans passing by!

The Torre del Oro (Tower of Gold) was also an ‘outside only’ visit. A 13th century building on the side of the river, it currently houses a small museum but we didn’t have the energy to visit. 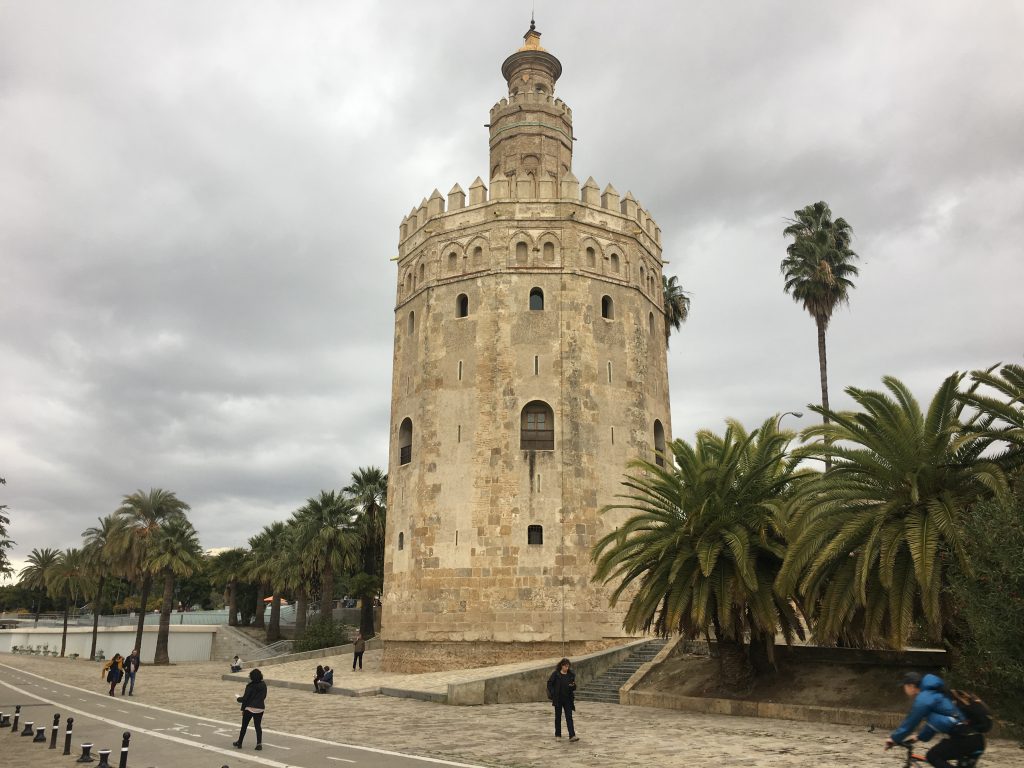 The Torre del Oro on the banks of the Guadalquivir river

Finally we found our way back to Bertie, footsore and ready to slump, the sun was beginning to drop and street lights were coming on.

Seville really was a beautiful and relaxed city, it would be easy to spend several days here, especially if you are a city lover, visiting sights and wandering the streets.

p.s. while we were here we were wondering why we spell and pronounce place names differently than the native population – is it colonial arrogance? or something that gets lost in translation as place names evolve over time? Either way I am still writing Seville instead of Sevilla which seems wrong.