From Seville we travelled south east to the Sierra de Grazalema natural park where we hoped to get our mountain fix. Our first stop was El Bosque, a town on the outskirts of the natural park with a tourist information centre and motorhome services. 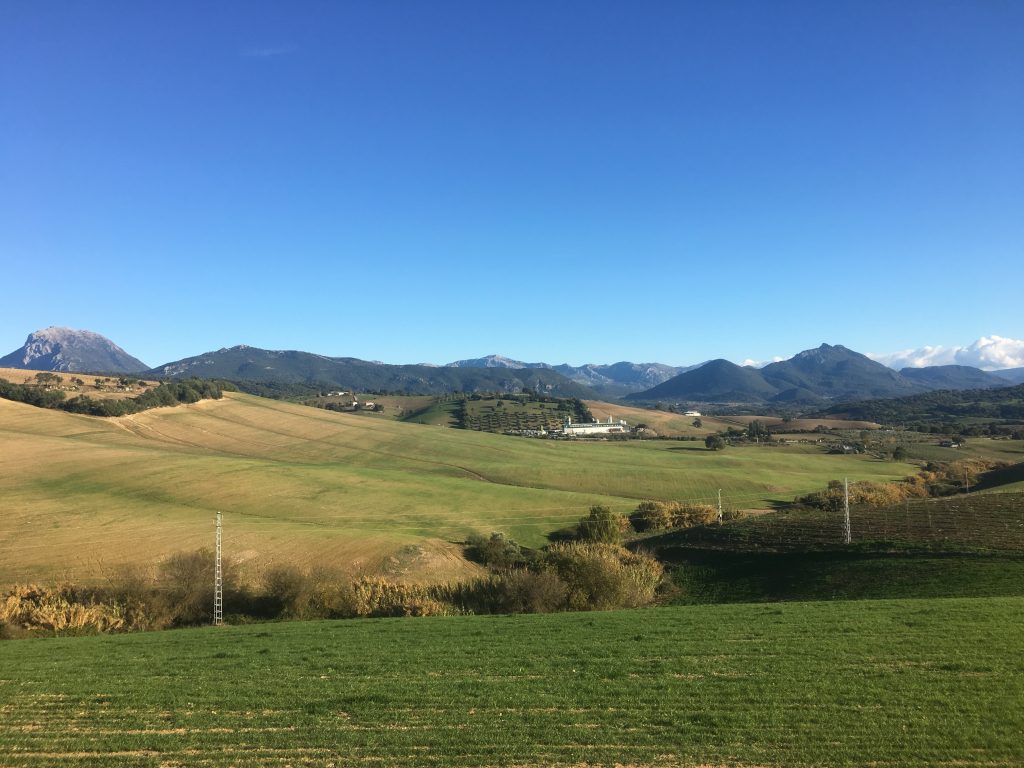 Our arrival in El Bosque was complicated by a trail running event a sport I half wish I was capable of, and half think is completely nuts. The start and finish point was on the road with the motorhome services so it was closed and barriers were up. We did a slow drive by before turning round and finding some temporary parking up near the petrol station. I went in to the town to find out when it would be over and to get some information about walks. It was just before two so tourist information was just about to close, they did provide a map of walks (free this time), told me I would have no problem getting permits for the walks that need them and said that the trail running festival was finishing at 2 and so we should be able to get into the motorhome service point by 2:30. They did all of this without letting me fully through the door while jangling their keys – a sure sign it was lunch time – but I couldn’t fault the information they’d provided. True to their prediction the barriers were down and the tape removed in short order and we could park near the services.

As it was still pretty early we took a short bike ride out of El Bosque to the village of Prado del Rey, we had found a really good booklet of mountain biking routes online here. This was another rural circuit, but we could see bare topped mountains in the distance as we traversed muddy, rutted, farm tracks. When we stopped on one track for a quick snack I heard a slurping sound in my ear that definitely wasn’t Paul – a huge dog had come up behind me (it’s head was about level with the bottom of my ribcage when I stood up). Luckily it was a big softie and just wanted some fuss, with the size of it’s jaws it could have taken my throat out! 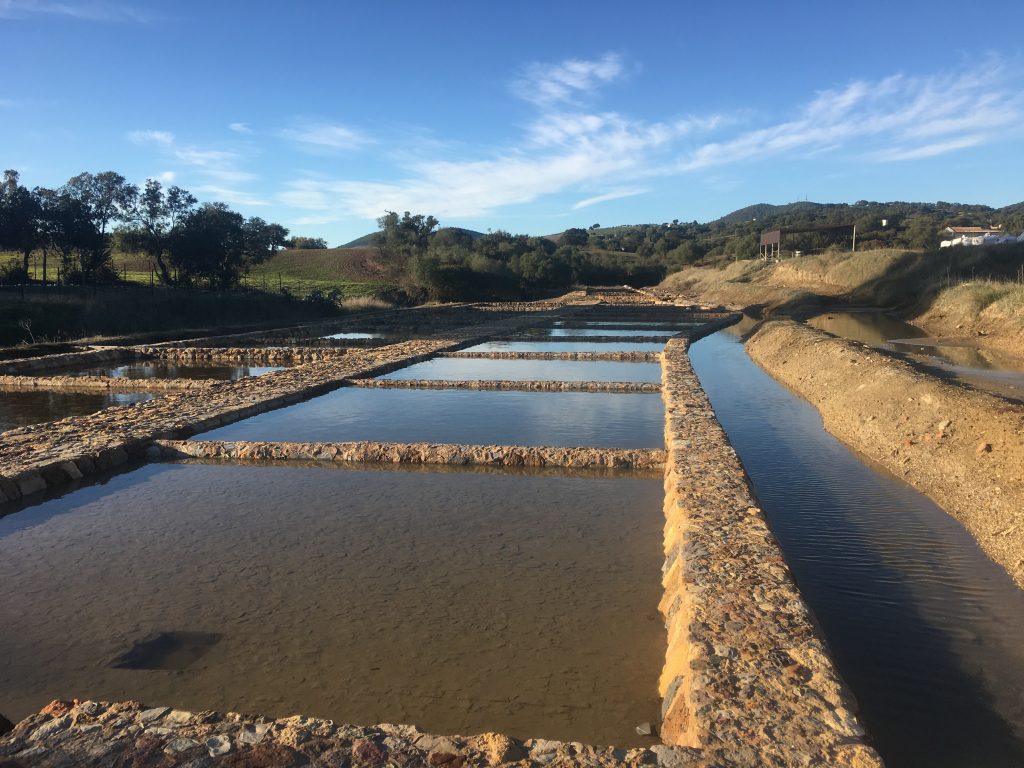 Roman Salt Pans on the way back to El Bosque 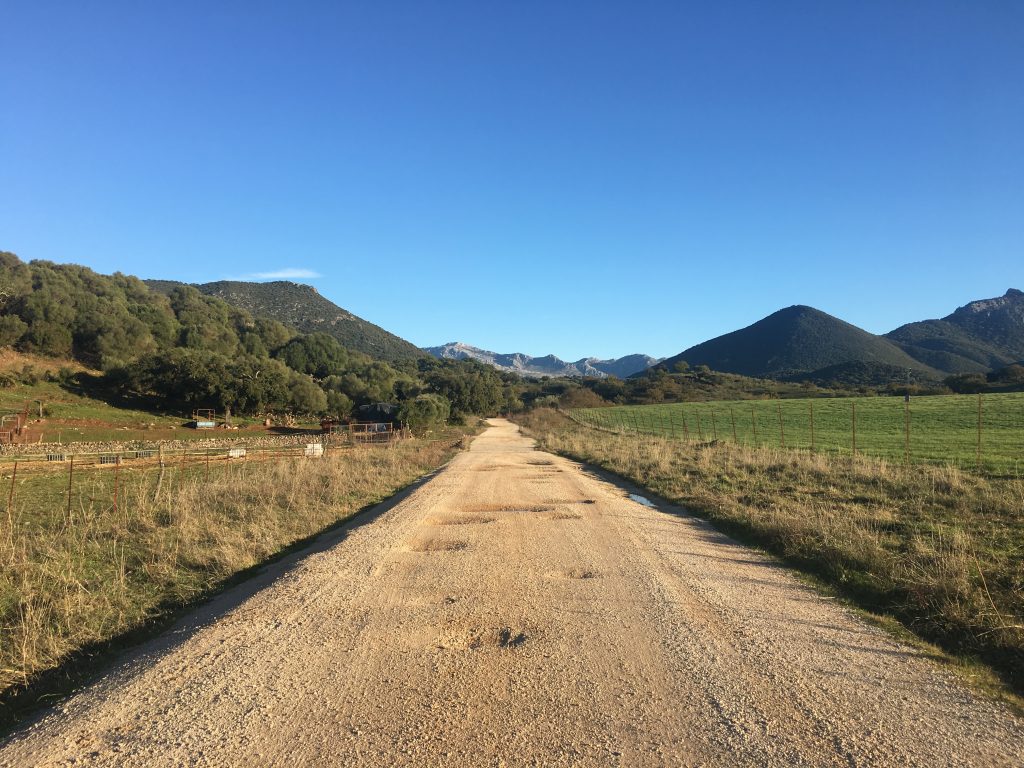 We stayed at El Bosque that evening and researched a few walks. As well as the information from the tourist office we found a very good website here. We wanted to do the Salto de Cabrero walk, but when we got to the car park (at the Mirador ‘Puerto del Boyar’) we found that the walk was closed. Instead we took the walking route from the same car park that went over a pass in the mountains to Grazalema village – the ‘Puerto del las Presillas’. It was a frosty morning and the route started on the north side of the hills, the limestone rocks were slippery underfoot with the frost and even more slippery when the frost had started to melt. We climbed through woodland and past a spring before the trees started to disappear and we were on open mountainside. This was more like it and the strong sun in cloudless skies quickly warmed us up as we strode across the grass. 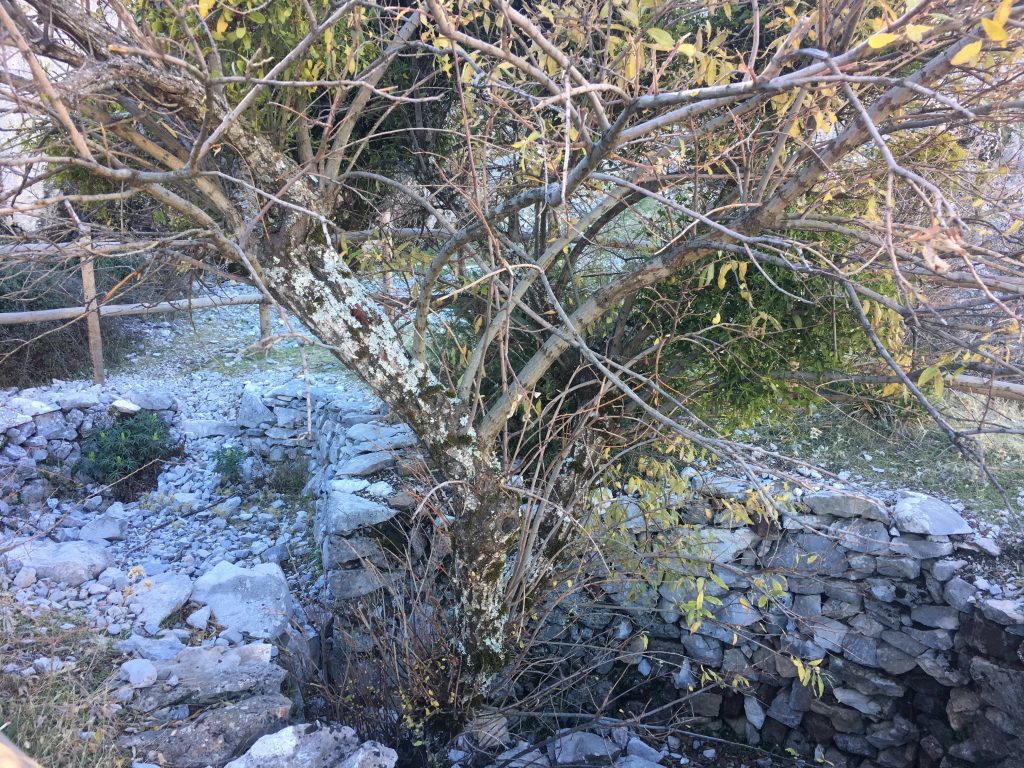 Lime Kilns on the lower slopes of the mountains 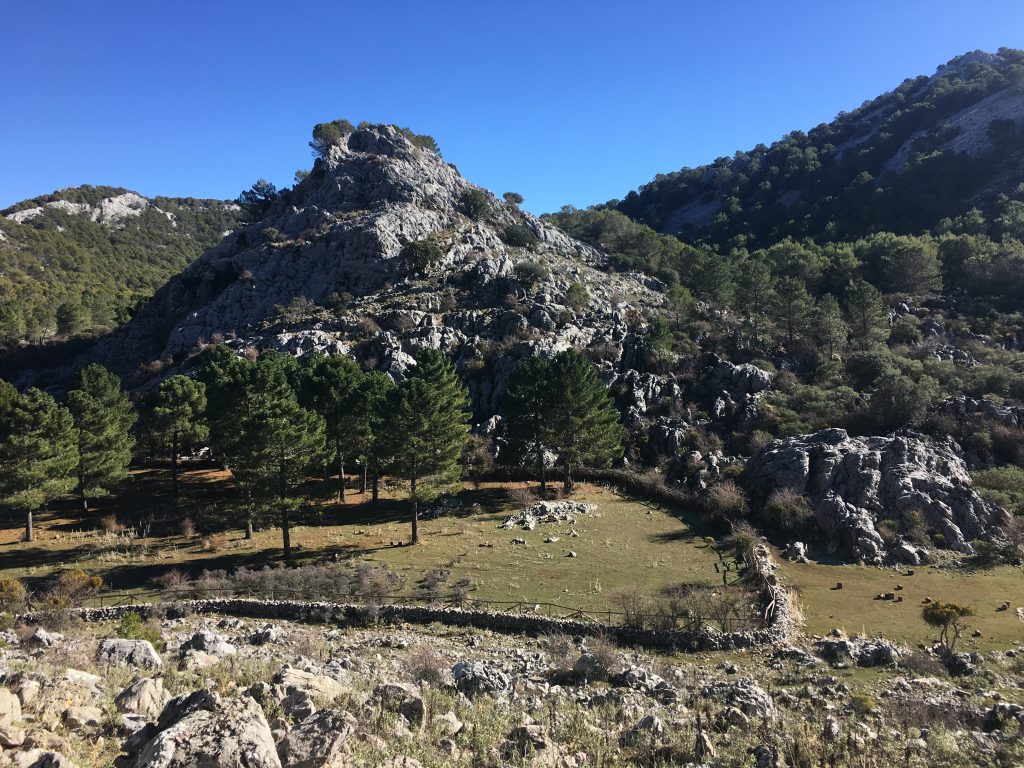 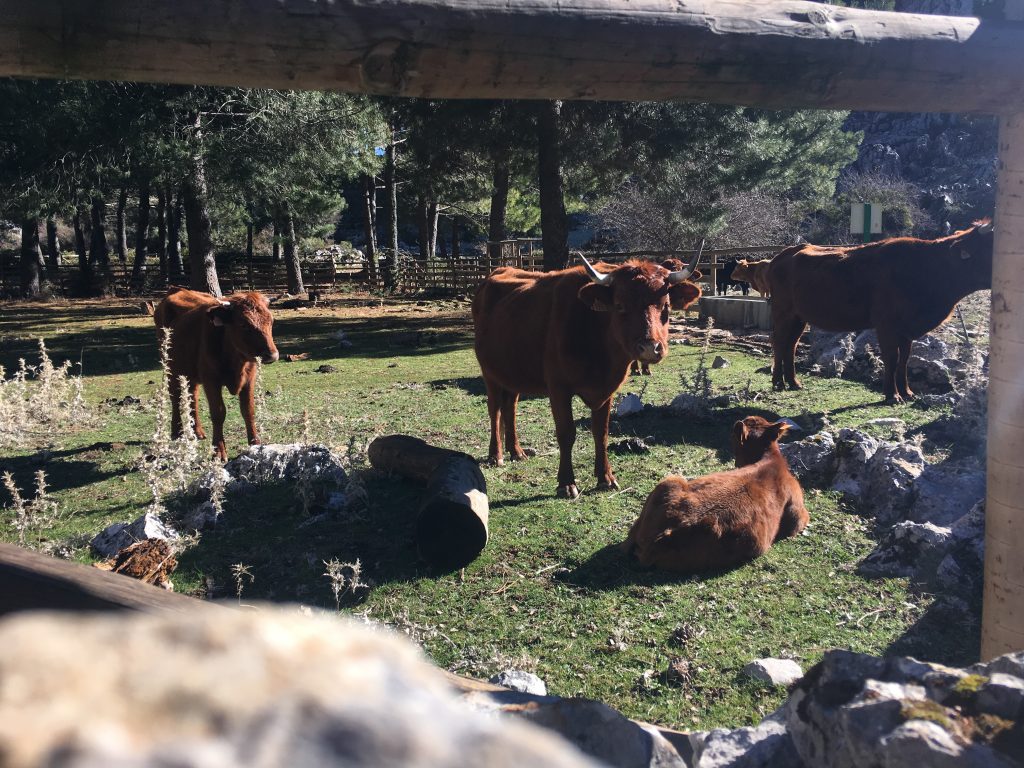 The pass took us between a ridge and hills before descending down the other side where the melting frost had left the path mushy underfoot. On the way down we passed a large group coming up from Grazalema, one boy of 10 or so was particularly excited but my Spanish and his English didn’t extend beyond exchanging greetings and names before he gave me a hug – much to my surprise as I’m not really the most cuddly person. On the way back as we retraced our steps we saw the whole group taking mass on the mountainside against a backdrop of rocky slopes. A table had been laid out as the altar and two priests must have carried their pristine surplices up with them – I couldn’t see any mud on the hems. We could only conjecture what was happening, but wondered if the young lad was being confirmed. 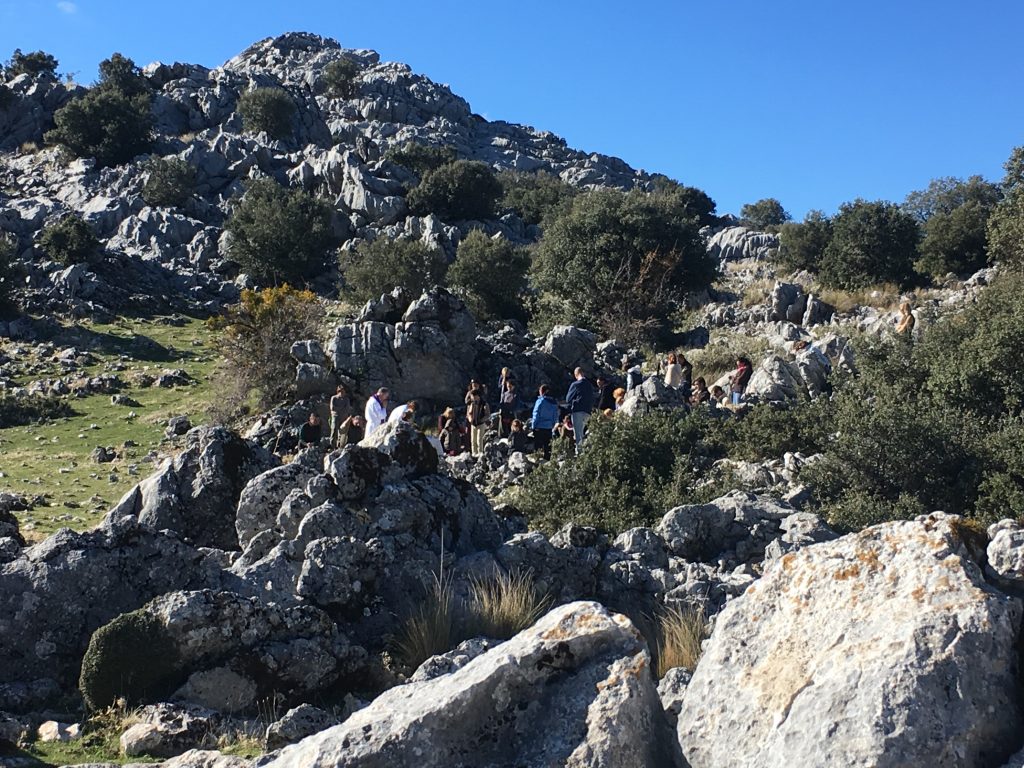 Mass on the mountainside

When we got back to Bertie we decided to move onto Grazalema village to park for the night. This would allow us to pick up some lunch items from the shops and was closer to the start of the walk. We tried a couple of spots on our side (south) of the village but they were pretty sloping, so ended up moving onto the other side of the village where some level parking had good views across rooftops to the mountains beyond. The only downside were the rumble strips on the road which were our early morning alarm.