Last time we were in the Aosta Valley was ten months ago, on our return from a four month stint in Italy. It’s a beautiful part of the Alps that seems to get overlooked by a lot of British travellers who either prefer to stay in France or stay on the motorway through the valley on their way to the Italian Lakes.

Before heading up into the mountains we decided to take in a couple of valley locations we hadn’t visited last time we were here. We woke up in the motorhome parking by the cemetery in the village of Aymavilles, the spot we’d arrived at the previous afternoon after our trip through the Mont Blanc tunnel. 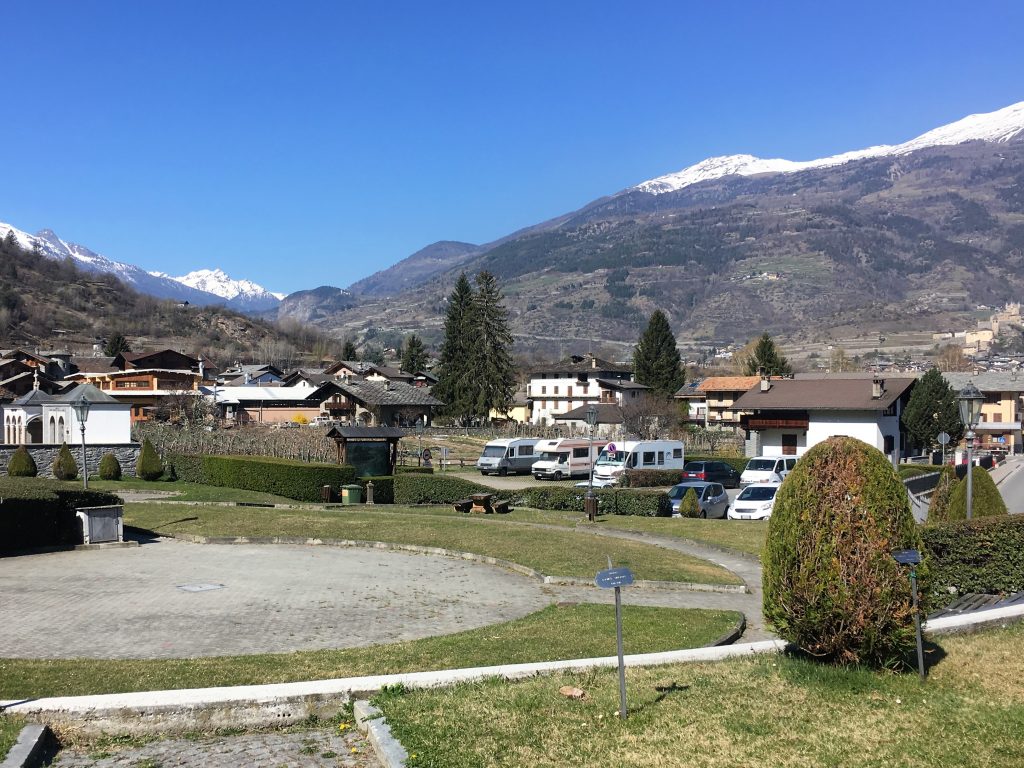 We had a little walk around the village, taking in the churches – one with a decorative Trompe l’oeil façade – and enjoying the views of the castle. Lazily we decided we couldn’t be bothered to walk to the top of the hill where the castle perches within it’s clean circles of green terracing; it’s square shape and four regular towers make it a vision of baroque symmetry but you can only go in the building on rare occasions as it’s still undergoing restoration. 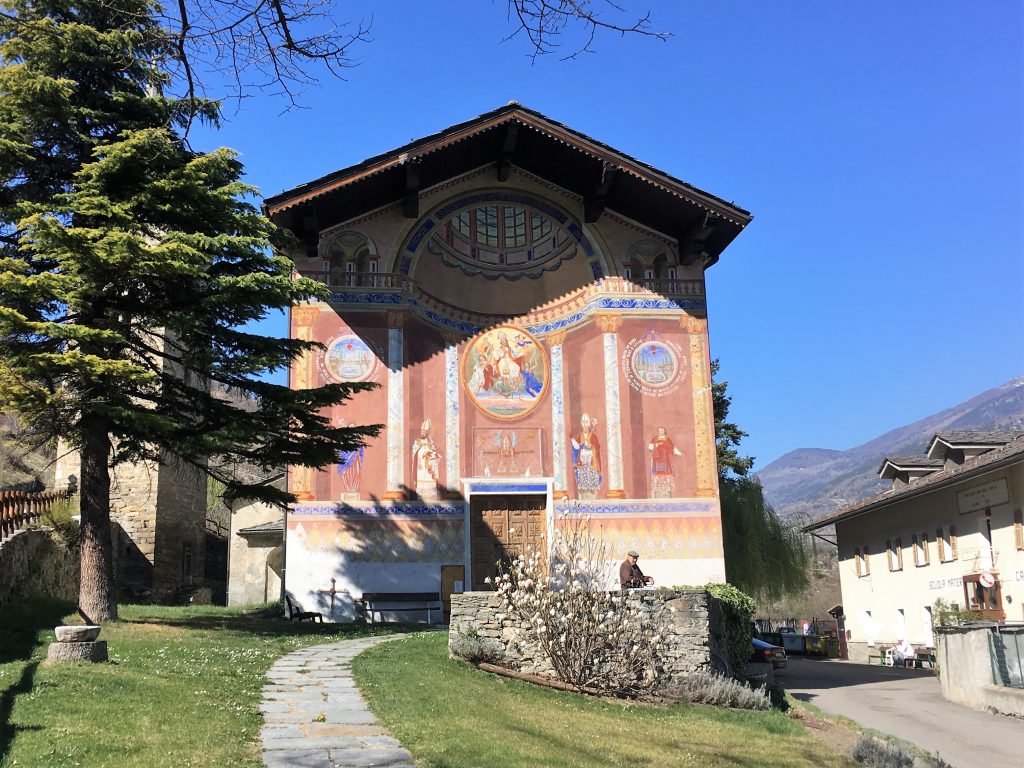 Aymavilles is surrounded by vineyards and fruit trees and our walk took us through ranks of stumpy vines accompanied by neat piles of shoots that must have recently been pruned away. We exited the vineyard to find ourselves walking a short stretch of roadside to take us to the wine shop. Walking along the side of a road has featured on several of our Italian hikes and we were reminded that it is not a pleasant experience. Fortunately wine shopping is much more fun; Aymavilles is best known for it’s Torrette red wine and a sample tasted pretty good, light and dry, although I have yet to open a whole bottle. 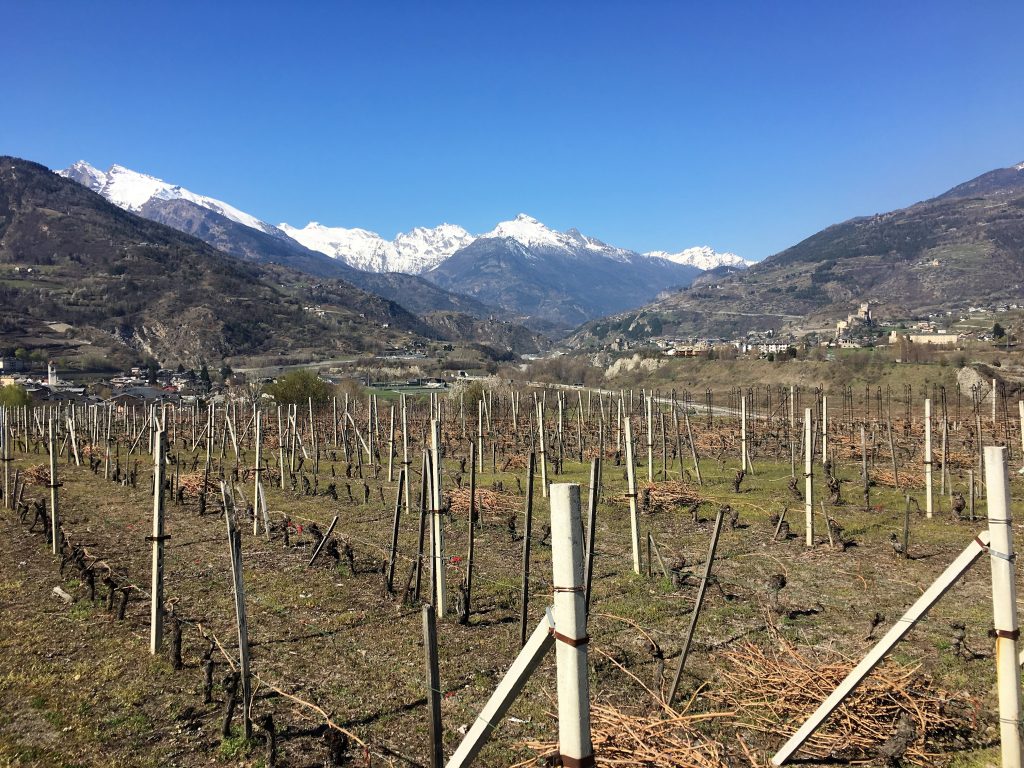 Although Aymavilles has motorhome services the water was turned off, so we crossed our fingers that some water could be found in our next location. Fenis is another village with a castle, this time the castle looked far more traditionally medieval, was easier to reach and was open to visitors. It’s courtyard was unexpectedly beautiful, with decorated wooden galleries supposedly dating from the 14th century, although given the ground floor of the castle was used as a barn at one time I expect the 19th century restorations may not have had a lot of the original to work with. Regardless, it would be well worth the 7 euro fee to get in, however we only got a peek because they have a policy that you can only visit as part of a guided tour and by the time we had got there we were too late for the last tour of the day on their off peak opening hours. If you visit it is worth knowing that the tours are only in Italian (fair enough) but they do provide English pamphlets so you can tag along and still understand what you’re seeing.

Fenis Castle – it was never built for defence despite it’s traditional medieval towers and crenellations.

We parked in Fenis by the cemetery where the motorhome services were operational and the water pressure sufficient to top us up in no time at all. The waste, in common with a lot of places in Italy, combined grey and black disposal in one location, through a grate that we couldn’t find any way of lifting up. I didn’t like the idea of straining our toilet contents through the grate but Paul pointed out that the gaps were pretty much the same size as the spout on our Thetford cassette and managed the disposal process without leaving any nastiness behind. With my clumsiness it could have been a very different story.

That night we toyed with the idea of moving to the larger parking further into Fenis village, but ended up staying put. Our fears of road noise were unfounded and we had a good night’s sleep to ready us for an outing on the bikes the following day.

We had noticed that we were on a bike route when we saw a map display at the entrance to the parking area. At Fenis there is a circular cycle route of about 5km, popular with cycling families and joggers, then between Saint Marcel and Aosta there is a stretch of about 15km of off road cycle track through the valley. The two parts can be joined by about 3km of on road cycling between Fenis and Saint Marcel. It’s all cycling in the valley with very little ascent and we thought it would make a nice day out.

After trundling around the circular section, leaving from behind the cemetery, we had to make our way to Saint Marcel. It wasn’t clear which way we should go with the option of either crossing the river and taking the SS26 road through Nus, or using the back road on this side of the river. The back road looked like the nicest option so off we cycled only to find road closed signs a few yards up the road. In the past we’ve encountered a lot of road closed signs in Italy that have ended up being misleading, so we decided to ignore it and hope that there would be a way through for pedestrians and cyclists. In this instance there was no way through. The road was blocked from side to side with a sign saying it was closed for creation of the very cycle track that would eventually join Fenis and Saint Marcel, what a shame it wasn’t complete yet. We decided to lift our bikes over the fencing rather than turn around but it was the wrong decision, we had three more fences to lift the bikes over and at one point the road had been completely ripped out leaving us gingerly tip toeing around the edge of a pit. This time the signage was not misleading at all, the road was most definitely closed. 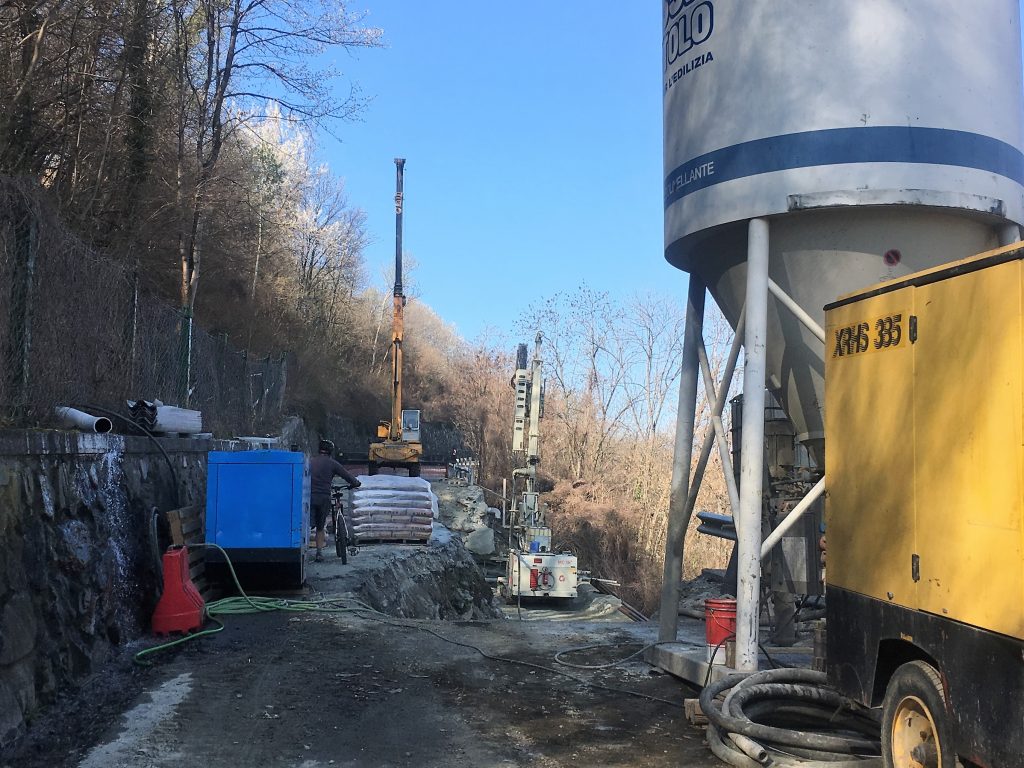 Not the best part of our bike ride

After our obstacle course we reached Saint Marcel only to be redirected by some friendly local Carabinieri. It turned out that they wanted us to cycle around a field where an agricultural display was taking place. We could see farmers unloading cows into a field where a stand and a number of marquees were being set up. We got the gist of the explanation that there was a competition and something to do with queens, so we had a look on the internet and found that this was one of the heats of the ‘Battle of the Queens’. It’s a competition that exploits the natural tendency of female cows to fight for dominance of the herd. The morning was the weigh in, then a lunch break, before the ‘fighting’ took place later in the afternoon. On our way back we stopped to watch the competition. Never before have I seen so many aggressive cows, posturing, scraping the ground with their hooves and bellowing. If I hadn’t known better (and been able to clearly see their udders) I would have thought they were bulls, these were big girls, with wicked looking horns and bad attitudes. The process seemed to be that a few cows would be led into the arena and paired up. Then they would start their posturing and eventually butt heads and lock horns, the winner being the one who forced their opponent to walk away. Sometimes they didn’t have to work very hard when the competition was only interested in munching grass, other times they were so fired up that they moved on and tried to pick a fight with another cow. This had no resemblance to bull fighting, the cows were not goaded into fighting, they are highly prized animals and the day is much more akin to a county show than a spectacle. 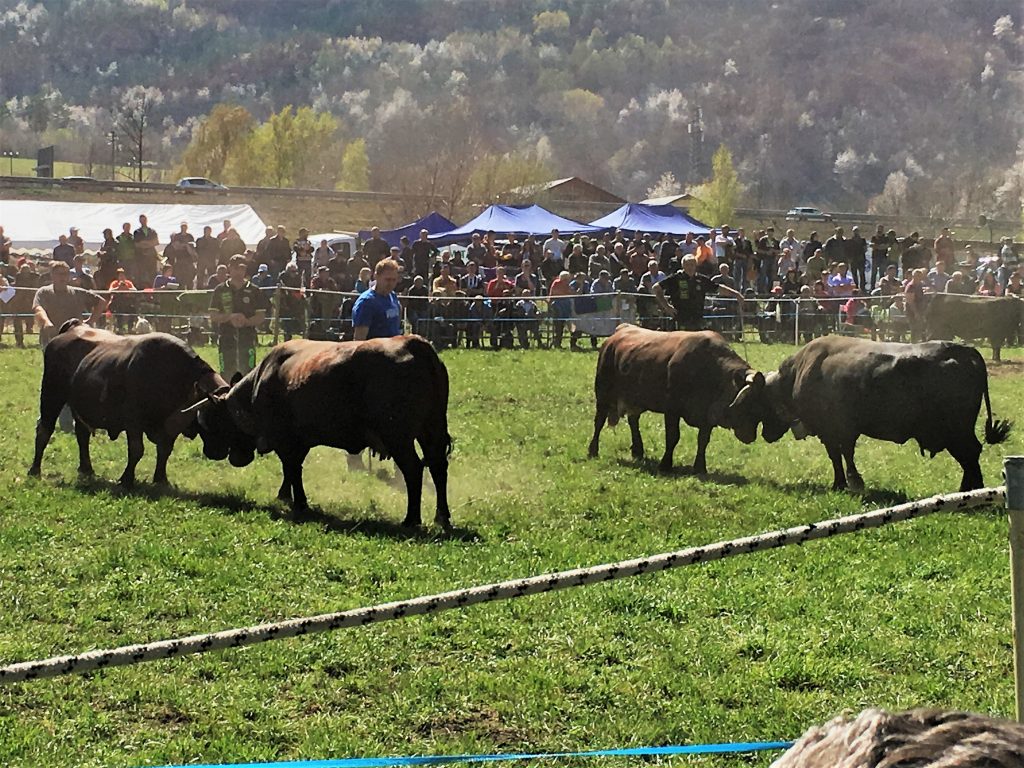 The battle of the queens

The rest of our bike ride was a lot less eventful, a long cycle through the valley with the river on one side and the motorway on the other. It was a hot day, still over 20 degrees when we got back to Bertie, and unusually for March we even saw Italians in shorts. Families were out in force enjoying the beautiful Sunday, picnics were being eaten, groups of people were playing various sports, including one unusual local sport which we think may have been either Tsan or Rebatta, we couldn’t quite work out the rules but it was a team game played with stick, bat and ball. It wasn’t a challenging ride, but we’d had some interesting diversions along the way that made it a satisfying day.