It took some persuasion to move us away from our next stop, that and a very full toilet. The sun was shining and the wind had mostly dropped and we had found a perfect beachside stop mere paces from the sea.

We were at Playa el Playazo de Rodalquilar, a beautiful cove where overnight parking is (sometimes) tolerated in low season. The route down to the cove is along a good quality concrete track and ends in a sandy parking spot where there were maybe a dozen vans. To the north is a small fort, privately owned but creating an interesting feature, and the low cliffs are eroded into a series of platforms and caves. To the south the coastline rises sharply, a slope of desert like sandy rocks and scrubby plants. Along the valley road leading to the beach palm type shrubs are being grown in rows, another fort sits abandoned alongside the shell of a windmill and a handful of houses and holiday properties. 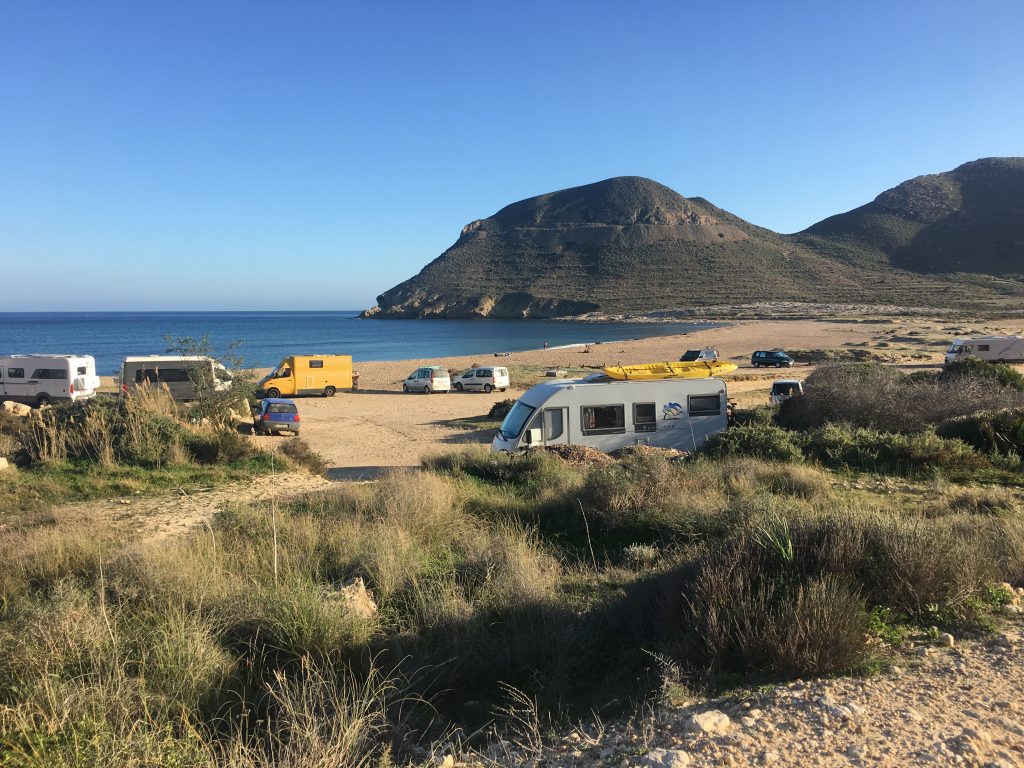 An array of vans parked behind the beach.

We walked in both directions from here, two short walks that could be joined together to make one decent length walk. The weather was too good for long walks though and each day we were keen to get back, relax on the beach and refresh ourselves with a swim in the sea.

We took the kayak out on one day – the second time in a week – and explored the caves and coastline. The area is a marine reserve and while the sea was calm we could see the underwater vistas, sadly it didn’t stay calm for long. I’ve started to hanker after a glass bottomed kayak, I wonder if it’s possible to get an inflatable glass bottomed kayak? 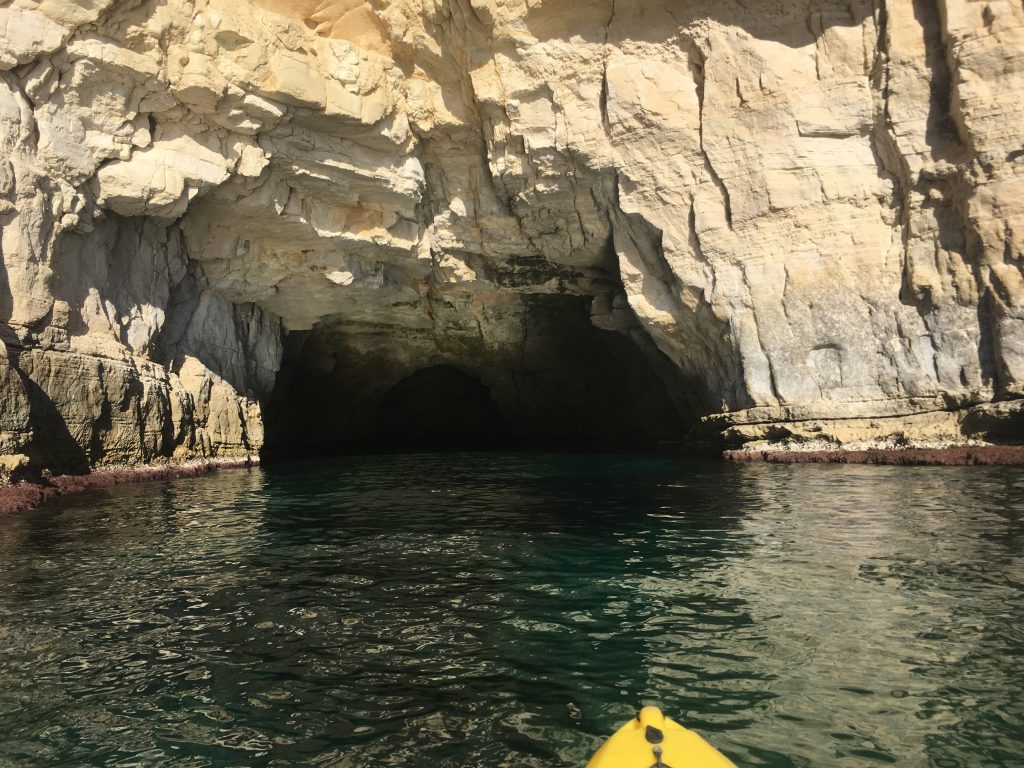 Kayaking into one of the caves on the coast

A couple of times we snorkelled, the water was pretty cold and my ears were freezing, but it was worth it to see the wonderful underwater views up close; rocks covered in vibrant red and green weed, surrounded by shoals* of colourful fish, swathes of sea grass hiding yet more fish and sandy sea bed where the fishes were so well camouflaged they seemed almost transparent. 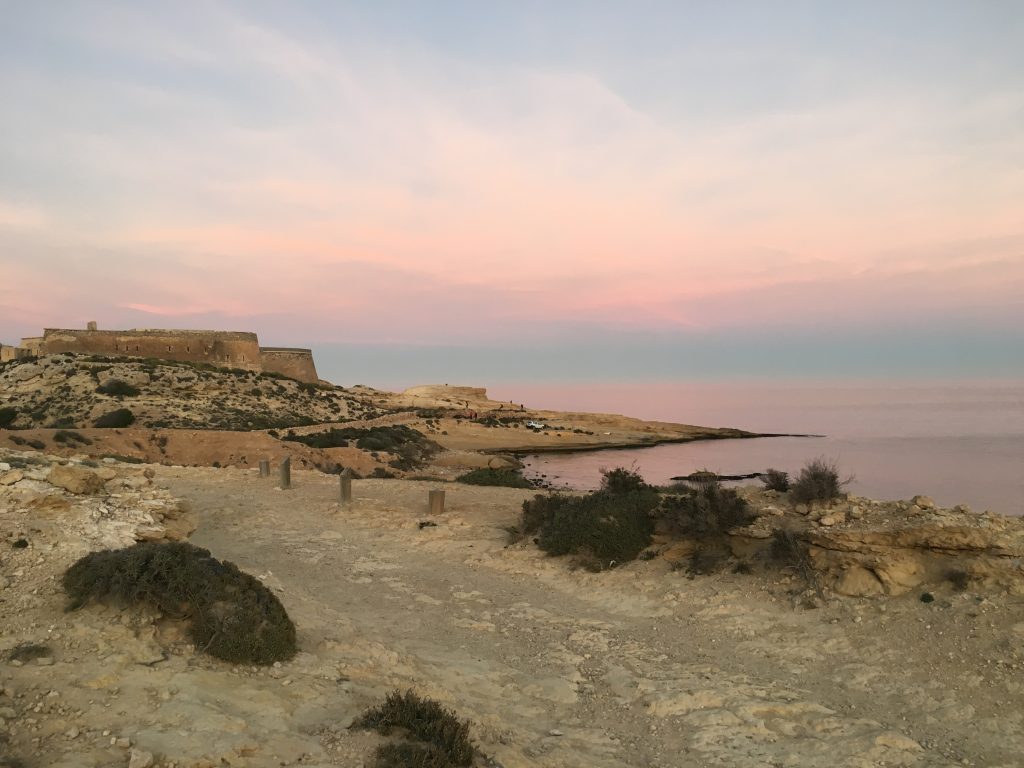 The fort of San Ramon in the rosy sunset light

The vans parked here were of all types, self build ‘hippy vans’, camper vans and white boxes like Bertie. At night we were lulled to sleep with the sound of bongos and the desultory strumming of a guitar, the waves a gentle accompaniment in the background. It was warm enough to sit outside at night watching the bright, clear stars before the moon rose. In the morning day trippers came down and set up their umbrellas and windbreaks on the sand, one chap towed a trailer tent onto the sand to create a shelter for his extended family (he had some problems getting it back off the beach, but a few rocks under the wheels helped to get some traction). Nudists got it all out on the beach, while other people were dressed to combat the wind in full length trousers and puffer jackets.

After three days we were meant to leave, but we just couldn’t, on the fourth day we had to leave or create a pollution problem. Tearing us away from this beach was difficult. We don’t dare come back in case we never leave. 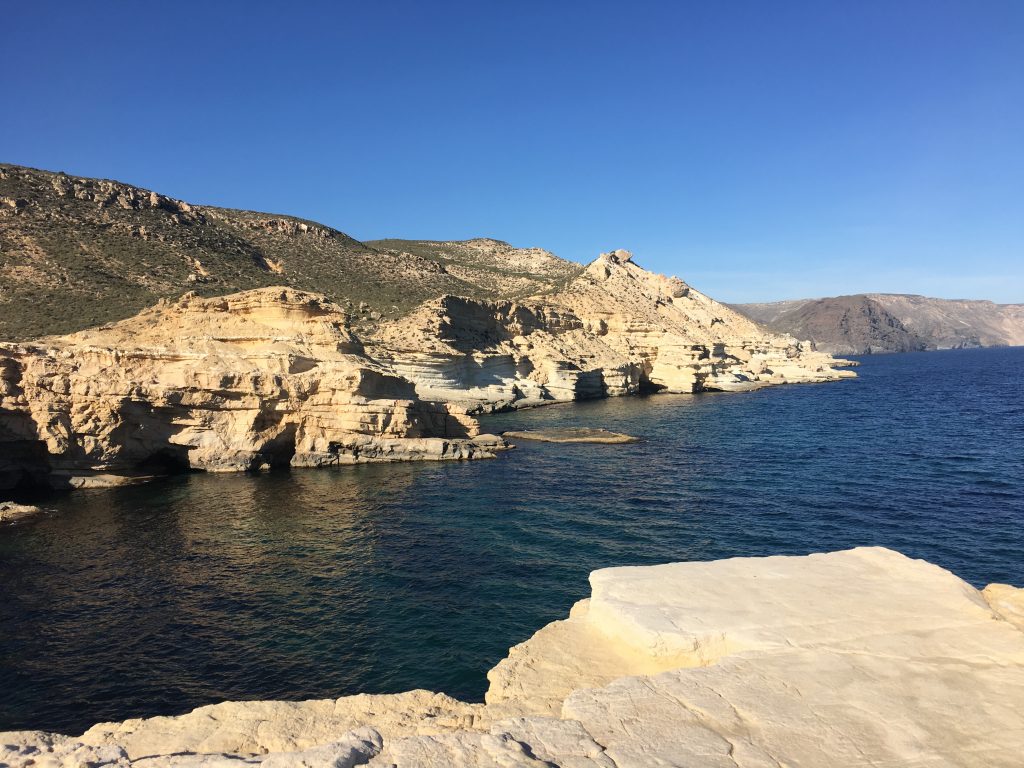 We decided to do a small circular route north and wanted to save the best (the coast) for last. So we started by heading up the valley towards the self catering properties past the Torre de los Alumbres, a ruined fort that had been built to defend the population from pirates. It didn’t do a great job, having been built in 1510 and then sacked by the pirates in 1520, but it was reused in the 18th century. 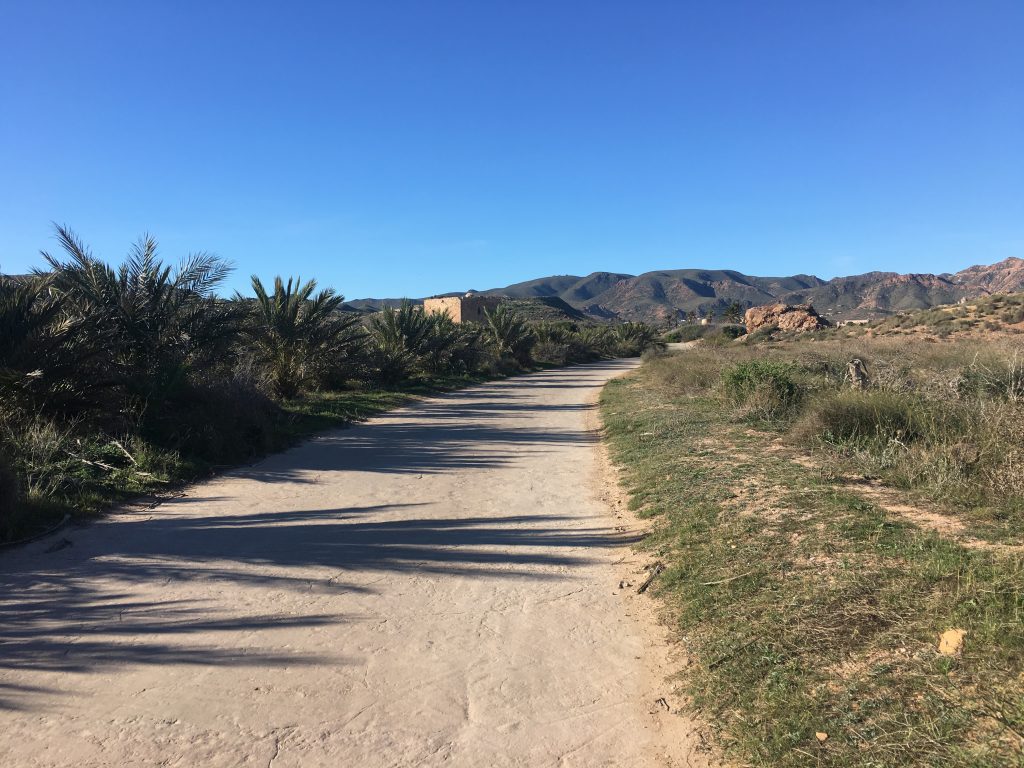 Walking inland, cultivated palms on the left, dry and dusty on the right, and the ruined fort in the background.

Just before we reached ‘La Ermita’ we followed a track to our right across the valley. When this met a narrow path at a t-junction we turned left and ascended up a gully between hills, past a white building that looked like a converted water tower and a collection of beehives. This path met the road and we turned immediately right to follow the dry river bed down to the Cala del Cuervo. Then we finally turned onto the coast, a very pleasant walk along the fantastically eroded cliffs that passed the 18th century Castillo de San Ramon before dropping back down to our parking spot. 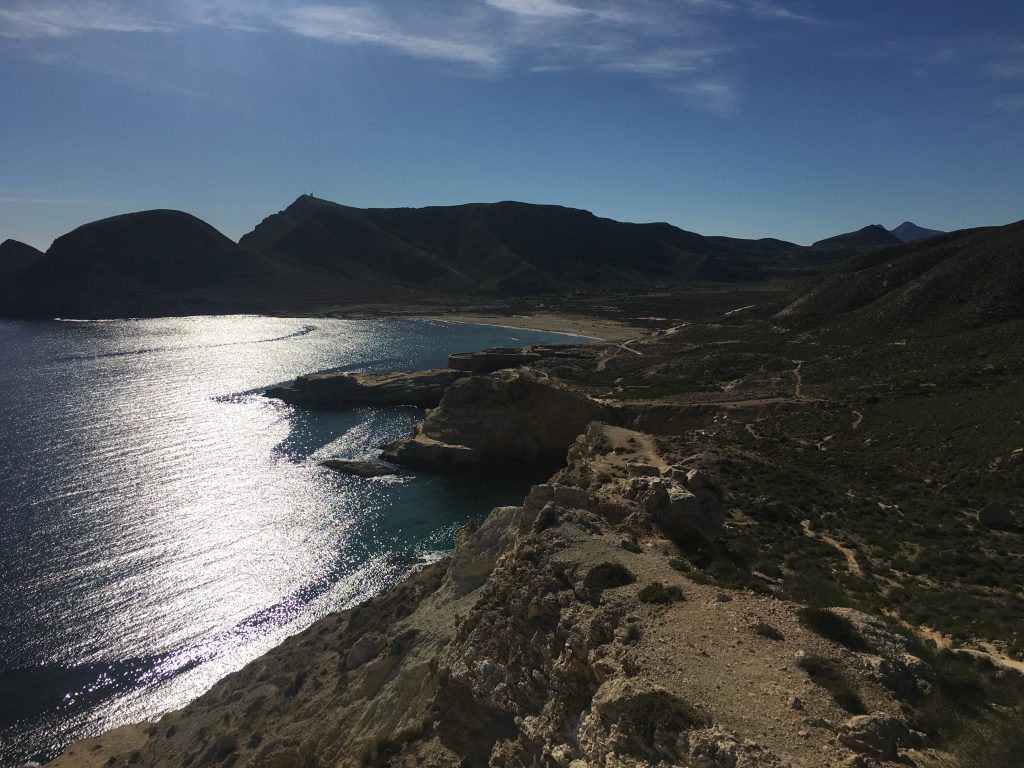 Looking back down to the beach from the cliff top path

We walked south from the parking area following the coast path’s white and green markings. When the path eventually crossed the tarmac road we followed it up switchbacks until we reached the lighthouse, the Torre de los Lobos, at the top. This tower was rebuilt in the 18th century on the site of an earlier lookout post, and is apparently the highest lighthouse in mainland Spain. The views are certainly spectacular. 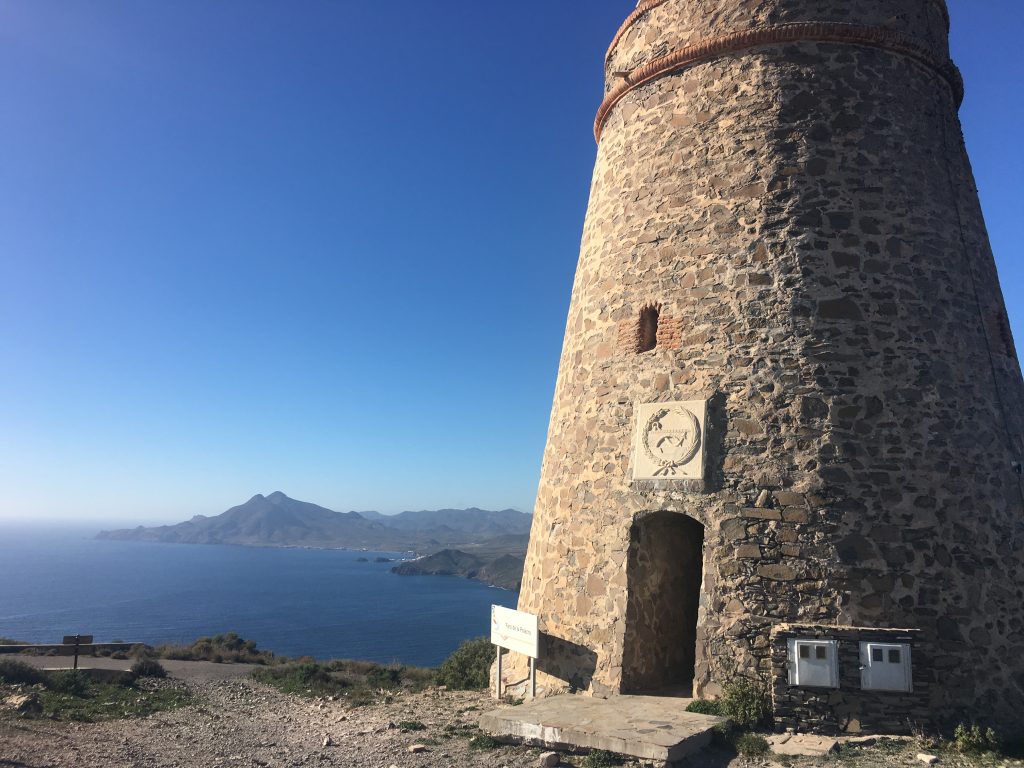 From the faro we descended the switchbacks again until we could break off onto a path that descended straight down the hill, cutting off the last switchback, we skirted around the southern edge of the small conical peak to our left and ended up at the parking for the Cala de El Carnaje. This terraced parking was quite extensive, but the dirt track to it was heavily eroded and would have been impossible to drive in anything other than a 4×4.

From the parking we followed the dirt track inland to the same road that led to the lighthouse, this time following it inland until a track led to the right. We followed the track around a house and then down to the small collection of holiday properties  on the road back to our parking spot.

* while I was writing this I had to check whether I should be using shoals or schools to describe groups of fish. Did you know that a shoal is schooling if the group of fish are all moving in the same direction in a coordinated manner? ‘How interesting’ as Paul would say.