We walked the coast path out of San Jose towards the east, working our way up through the streets of the town until we found the path leading out of the end of the Calle las Olas. 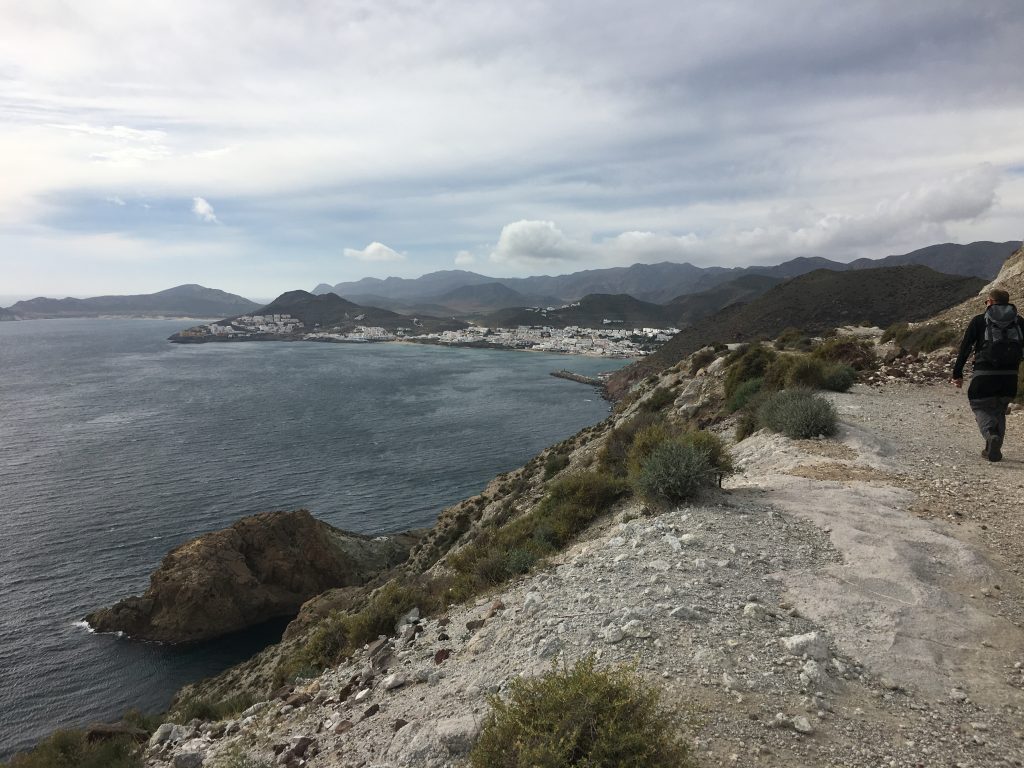 Looking over San Jose from the path

The path started with promise, worn and rocky with a fence on one side that stopped us from slipping down into the properties below. There were great views of the harbour from on high. As we rounded the headland we dropped down over worn chalky white cliffs into Cala Higuera, past the café and pebbly beach and up the other side of the bay where the path joined a wide track which took an inland route to avoid inlets and rocky outcrops. We walked on this track past the quarry but were not very inspired by the rather easy path with distant views of the sea. 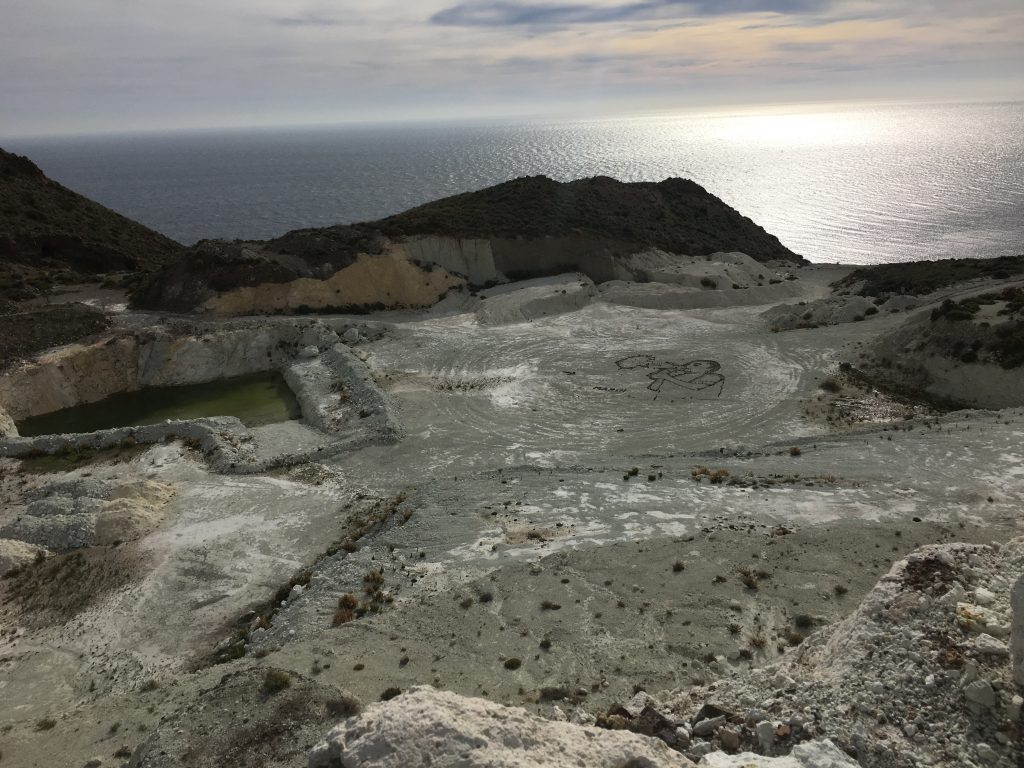 Looking down over the quarry – the road down to the bottom was closed with the usual safety notices, but this didn’t stop fishermen from driving down here to get to the Cala Tomate (or ‘artists’ evidently)

We needed to liven things up a bit so we followed a path that took us down to the sea at Cala Cortada. This was a bit more like it, the pock marked cliffs loomed over the tiny pebbly beach, there was an abandoned village and two brick pillars painted bright white on one side to guide boats in through the rocks. From this level we could see along the coast where there was a rock arch like the eye of a needle. We could also see a faint track that followed the coastline. 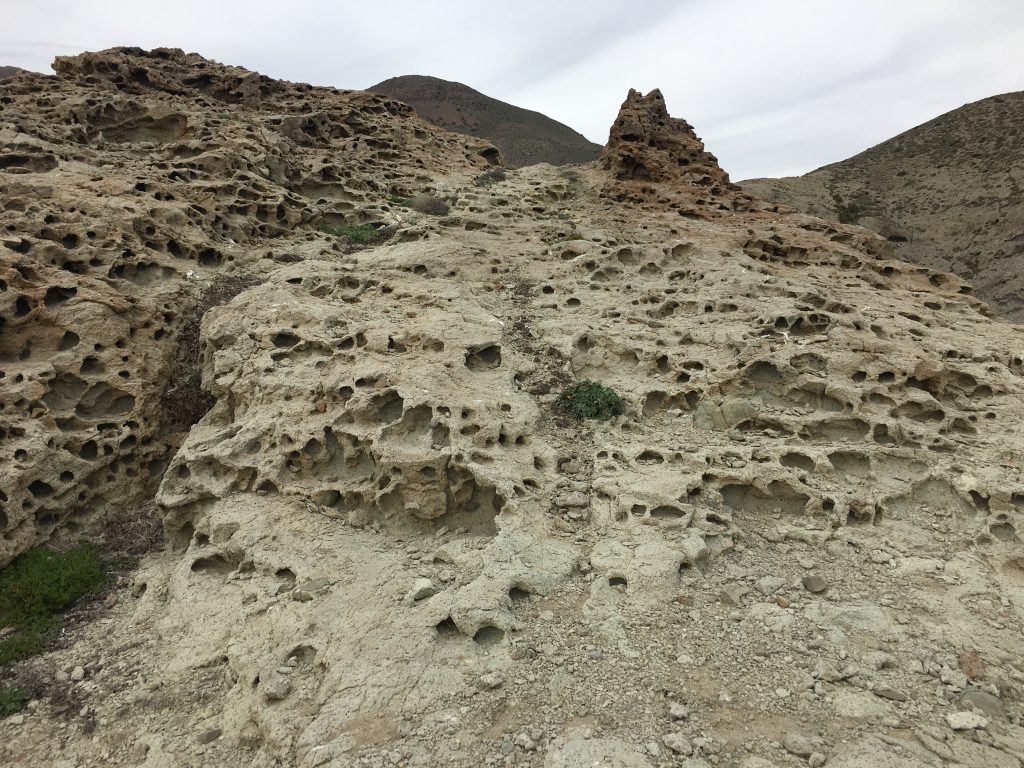 Pockmarked rocks are everywhere, I don’t know what forces of erosion create so many small indentations but I assume it may be volcanic in origin

We followed this faint path along the sloping coastline, it only took us as far as Cala Tomate when we had to cut inland and join the track again, but it had been enough to liven up the walk. 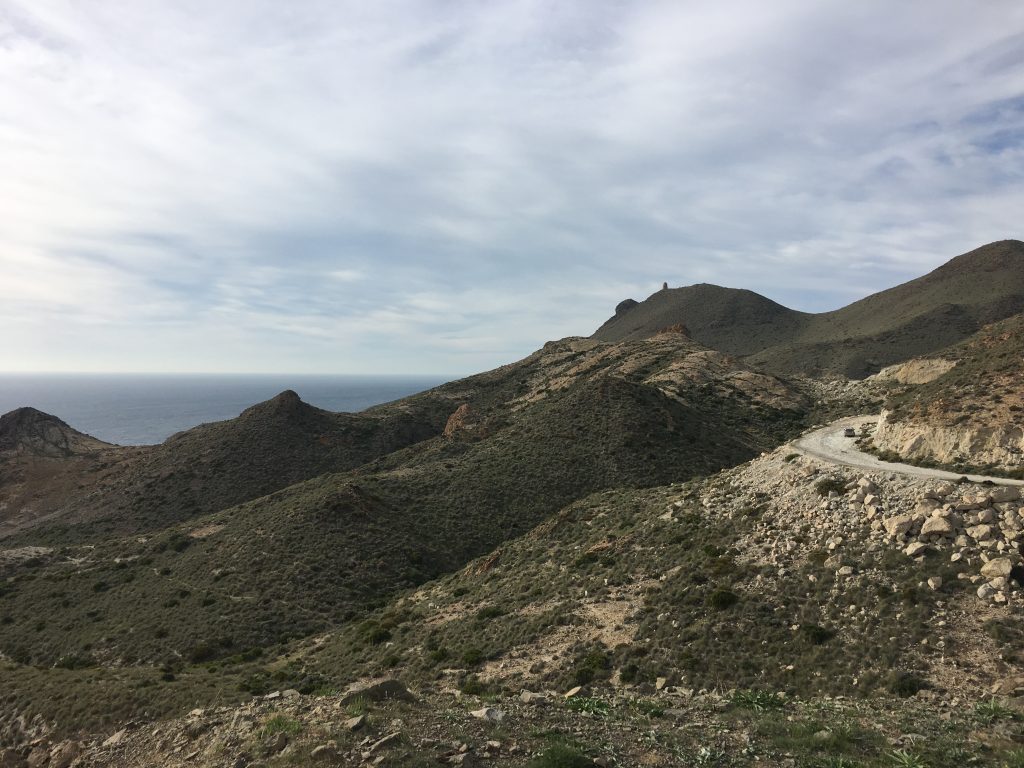 That afternoon we needed to empty the toilet and headed to a camper stop inland. We’d only intended to ‘carga y descarga’, but the wind had picked up and the possibility of a nice level parking space, a hot and powerful shower and free wifi tempted us to spend the extra €5 to stay overnight. It was a quiet way to spend New Year’s Eve but it allowed us to do a few jobs before moving on again.